This is the latest installment in an occasional series where I share my thoughts about a single photo. You can read the other postcard posts by clicking the links below.

This photo makes me nostalgic for a few reasons. At first glance, it's not much. A large boxcar spotted at the end of a weedy spur. But upon closer look, you might see glimpses of railway history. 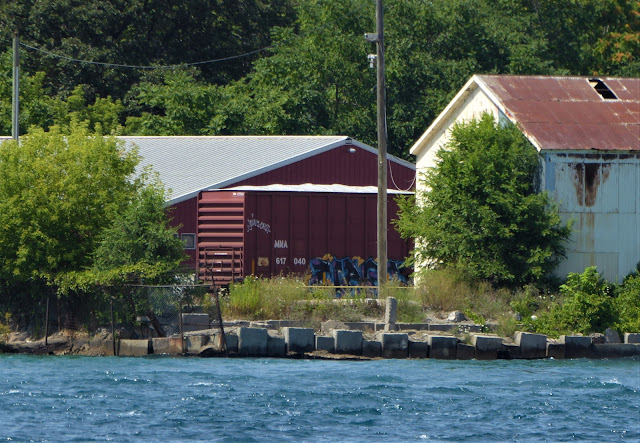 I saw this boxcar from across the water in Point Edward, Ontario, beneath of Bluewater Bridge. I brought my daughters and nephew there in the summer so they could run around at the playground and have some famous bridge french fries. As we were walking along the water's edge, I saw the boxcar and it made me smile for a few reasons.

The first reason is that there are still some active rail lines along waterfronts, even though many have disappeared from the urban landscape. This line, in particular, is a former Grand Trunk line, now part of the Canadian National system. I've seen some compelling photos over the years of old blue and red GT geeps crawling along this old right-of-way to serve the industry along the line.

Every time I visit the area, I almost expect this rail line to be removed. There is no place in today's modern world for tiny little spurs along the waterfront to be serviced by massive Class I railways.

Well, I guess there is still room for this type of operation.

I don't know what I like more, the weeds along the tracks, the fact that this car reminds of of the old high-cube boxcars that once carried auto parts or the fact that this photo also incorporates the stunning blue water of the St. Clair River.

For those interested in the operational details, this car carries paper, as it has been spotted at the Dunn Paper mill on Riverview Street in Port Huron. Someone with more knowledge of CN's local operations might be able to tell you about the frequency of this service.

For me though, I prefer just to marvel at the image itself. A boxcar on an old spur, sitting amid the weeds along the waterfront. This shot could have been taken in the 1970s or possibly 1960s and the scene would be nearly identical today.

In other words, timeless.
Posted by Michael at Friday, November 15, 2019