Railfans in Ottawa are an impressive bunch, I have to say. We don't have much to see, but it doesn't stop many of us from capturing what little there is. Many also are not afraid to go far afield to capture something in Eastern Ontario. Just go the Eastern Ontario Rails Facebook group (you need to ask the administrator to join formally). I would say that, of late, an outsized amount of photos and chatter is focused on CN's weekly Arnprior Turn. The crew for that train must wonder how they have managed to attract so many fans of late.

All of this is a lead-in to my story of using the force. By the force, I mean being ready at a moment's notice to identify 589 approaching my neighbourhood and heading out to catch it. Recently in October, I was working in my back yard, listening to a podcast with headphones when I thought I heard the distant sound of a freight engine's horn. Did I mention I am hearing impaired? Yes, my sixth sense for this train is quite impressive sometimes, if I do say so myself.

An aside: when we had a visitor a few years ago and one of my children heard a distant train horn, I quickly identified it as a Via train, since I knew which direction it was coming from and knew the difference between a P42 horn and a geep horn. Our visitor looked me funny and asked how I knew the train was a Via. I guess my railfan was showing. I quickly pointed to the direction of the sound and said those were the Via tracks over yonder. The other way was where the freight tracks were.

So, back to my story. I rushed into my car with my iPhone as there was no time to grab my camera inside. This was going to be a tight timeline to get to Corkstown Road to get a shot. I saw 589 passing in front of me on the Moodie flyover, so I knew it would be tough to catch it at Corkstown Road. But I did get there with a few seconds to spare, although I couldn't get to my vantage point of choice on the sunny side of the tracks.

I just barely made it to this spot in time to get some initial shots. Luckily, the lights on the Corkstown Road crossing were not working, which forced the train to stop short of the road as the conductor had to get out to guard the crossing. After one pickup went through, the train proceeded ahead across the road, slowing a bit to allow the conductor back on before the consist picked up speed. The sun flare on the train was some of the worst I've ever encountered, but I told myself I would fix it up with some photoshop later on. Note the conductor ahead of the blue geep. 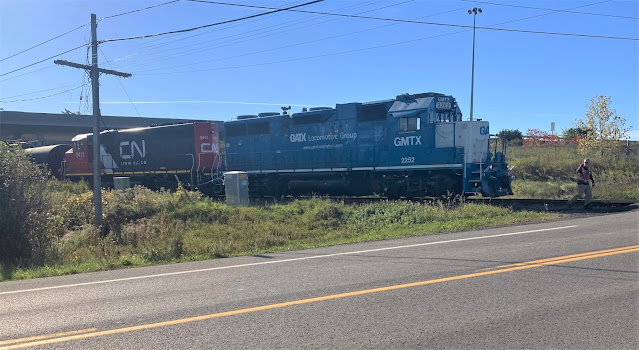 Below, you will see the conductor looking west on Corkstown Road as the train approaches the level crossing. You can see the effects of the sun on the side of the engine. That was the best I could do with my photoshopping skills. Anything more would not have been true to the original image, so I avoided the temptation to alter things too far. I do have to mention that this is the first time I have seen this type of old school railroading where a conductor is guarding a level crossing like this.

As many local railfans know, work was recently done to shore up the Beachburg Sub ballast, ties and tracks between Federal and Nepean, which seems to be the last remnants of CN controlled trackage in the area, save for a few other scraps here and there. I'm not sure who is in charge of signalling repairs, but my guess is it's RailTerm, which is the company that does similar work for Via Rail in the city on its trackage. I guess they haven't gotten to this repair yet. 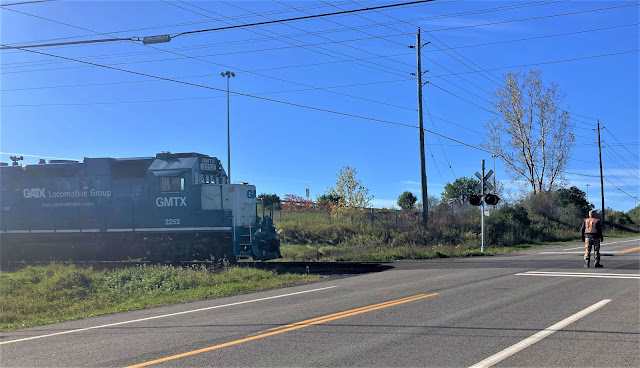 Notice the absence of crossing signals below. Now that I am moving away from the sun, the two-engine head end of the train begins to become a little more vibrant and less shadowy. Here's the lead unit, GMTX 2252. This leased unit has been making the rounds in Eastern Ontario as of late. I'd be curious to know why CN is still leasing units and why they might be short of motive power. 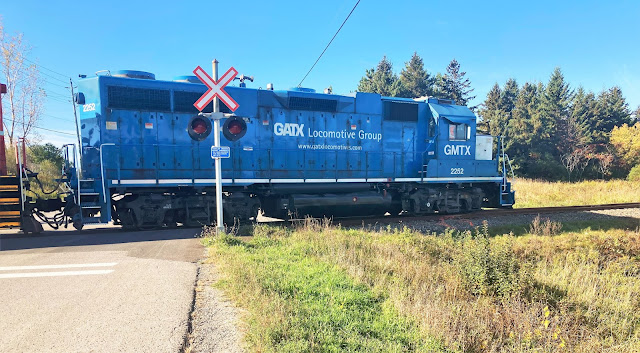 CN 9411 trails the lead unit as the relatively long consist approaches the curve in the track toward the old Nepean Junction. This is the first time that I have seen a two-engine lead on this train, which seemed to be a late summer/early fall change to CN 589. The shadows are still pretty brutal at this point, but I was able to touch up the image a fair bit to include a little more detail. 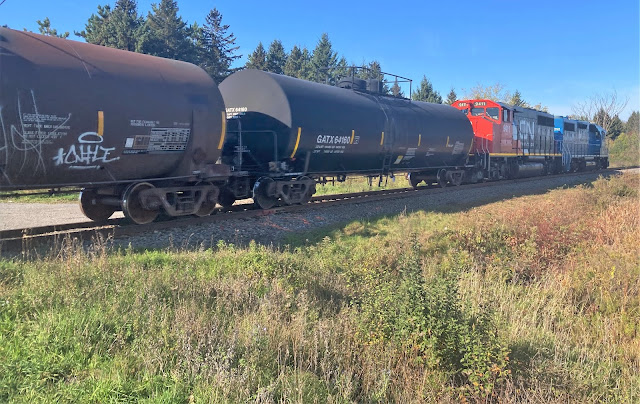 Here's one final shot of the consist, which includes seven (yes, seven!) tankcars all headed for Nylene Canada in Arnprior. Compare this to the one-car consist I have seen headed to Arnprior in the past. I'm not sure if this is a one-off or whether Nylene Canada's business is picking up, which is requiring more caprolactum. 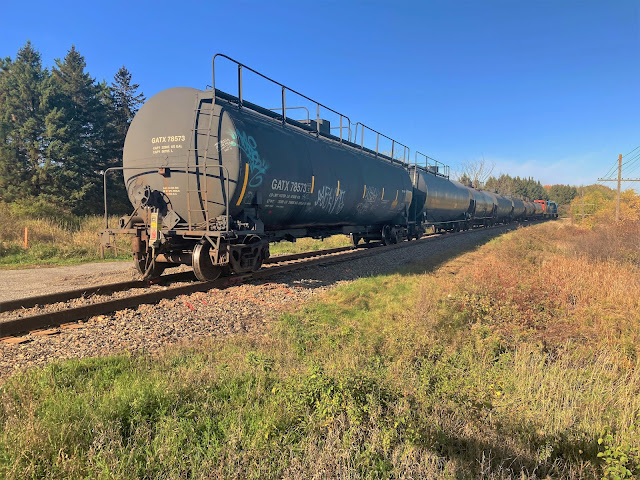 At this point, I hustled back to my car and decided to test my luck at catching this train a second time. Given its relatively slow speed and my close proximity to March Road, I figured I would be able to beat 589 to the March Road crossing. Local railfans in Kanata say the train often stops at the Tim Hortons right next to the tracks, which would give me another opportunity to take some shots.

I'll save the second part of the story for the next post.