Let's begin the reunion tour with a familiar face. When I walked away from blogging in the fall of 2020, I was pretty sure that I would never see this train again. I have never been so happy to be wrong. For the first time in two years, I caught up with CN's Arnprior Turn, or whatever you know it by, whether it be the Arnprior Local or simply 589.

I have to give local railfans credit for this catch. I've been keeping an eye on the Eastern Ontario Rails Facebook group over the last year. I have to tip my cap to the railfans who have dedicated themselves to catching CN 589, which makes its way out to Arnprior every Wednesday to deliver caprolactum to the Nylene Canada plant.

The biggest change with this train over the last year or so (possibly longer) is that the train now makes a run up to Kott Lumber on the Smiths Falls Sub before heading back to Federal Junction (13 km backward movement) to reconnect with the Beachburg Sub and Renfrew Spur. This means a longer timetable for this train. By watching the Facebook group and seeing that 589 usually carries lumber car empties out to Arnprior, I knew that Kott must be included on the Wednesday run now. Previously, 589 made a separate run on Tuesdays and Sundays to Kott and SynAgri, both on the Smiths Falls Sub. The newer run meant 589 was passing through Bells Corners and Kanata much later than it once did.

That had me thinking that I could catch the train at Fallowfield Station, simply by being there at a certain time and watching the rail signals. I knew I had a chance if I left for my appointment early, which meant I would have to pass by the station anyway. Sure enough, I wasn't there more than two minutes before the signals governing eastbound traffic went from straight red to straight yellow, flashing green and solid red. Something was coming from the west. 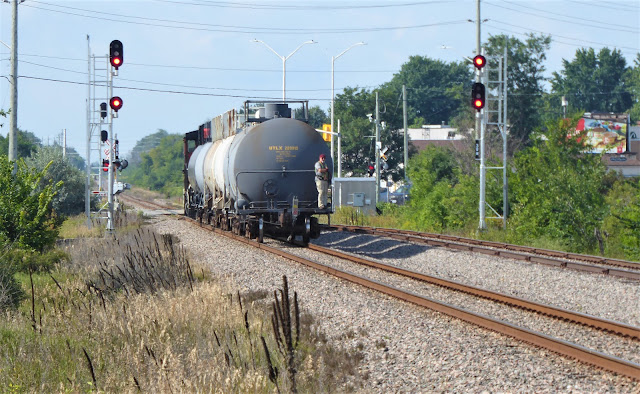 Here is 589 pushing four tank cars east toward the station with the conductor on point on the last tank car to keep an eye out. In the above image, the train has just crossed Fallowfield Road. As I was standing there in the Via Rail parking lot, it occurred to me that this was only the third time I've caught CN 589 on the Smiths Falls Sub and the first time I've caught it at the station.

The four-car consist snuck up on the station and did not use its horn as it crossed Fallowfield Road. I made sure to back up in the parking lot, so I avoided having a wedge image like the initial shot above. People who have been to Fallowfield know that this is not easy. You need to position yourself at a spot at the end of a parking lot on either side of the station. I chose the west parking lot since someone decided to obstruct my initial spot at the end of the east parking lot. I was happy with my initial shots, but was disappointed to see no lumber cars in the consist. 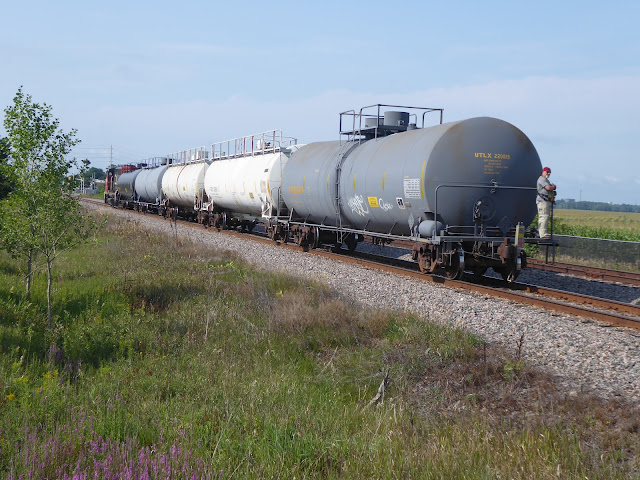 As I backed up, I realized this was the first time I was shooting a train this way, as it backed up. So the traditional going away shot and the initial shots were reversed. I tried to catch some of the corn field in my shots. You can see a piece of it to the right. 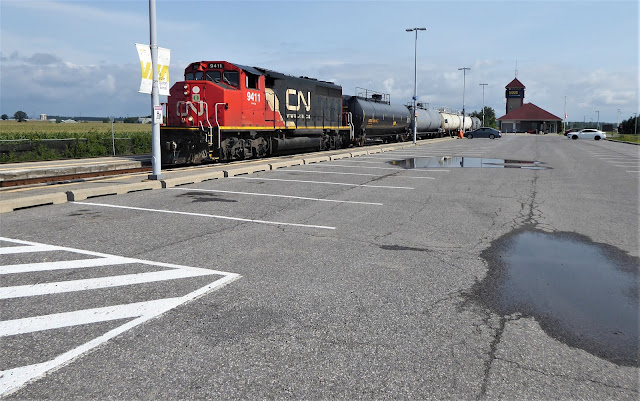 This shot above is my favourite of this meet. I had a few other shots with the train closer, but the Via banner to the left of 9411 was obscuring the engine. It's a challenge you face when you shoot near a passenger station. Luckily for me, the west parking lot was almost completely empty, which meant my shots here were not obscured by many cars or trucks. 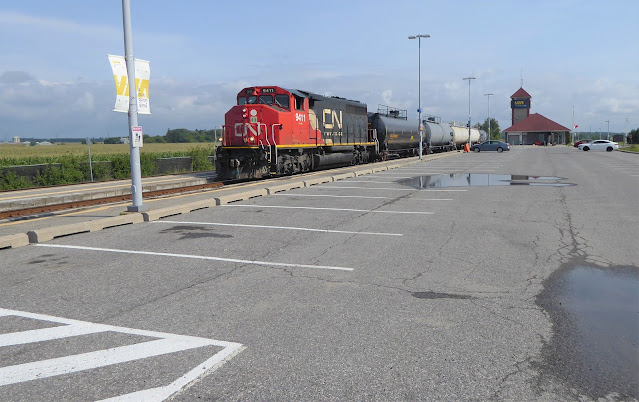 The above shot has a little more of the cornfield in it. The shadows were a little funny in the morning, especially given the angle of the sun and the angle of tracks. I played around a bit with this photo to eliminate the shadows a bit and brighten it up. 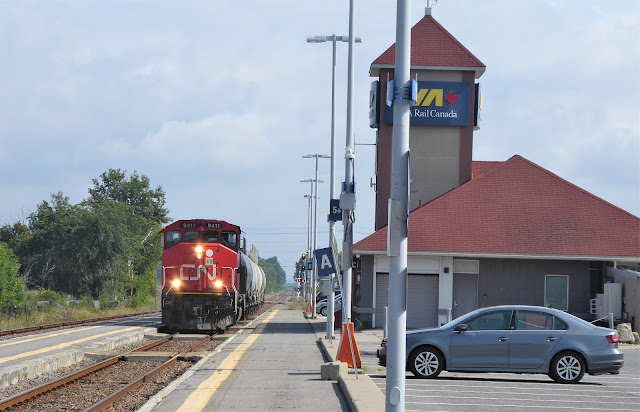 Here's a final image, shot straight on, with much of Fallowfield Station in the frame. All in all, it was a successful meet. I learned a few things during this meet. The most important was to keep a close eye on the track from the platform, since the approaching train had no lights shining or horn blaring that would normally give you a warning. Instead, it was only by using my zoom that I noticed a large black circle, in this case a tank car, slowly coming into view. Also, my attempts to study railway signals and understand them have really come in handy.

This post was a happy surprise, as I had planned another topic for my first foray since returning. But after seeing the images, I figured that maybe it was better to start with a bang and give the people what they want. I've had mixed feelings about 589 in the past, to be honest. It's always nice to catch a freight train in Ottawa, but I don't want this little runt of a train to be the only thing I blog about, so I had to think about whether to start the blog's reunion tour with this meet.

In the end, I figured it was worth it, as I haven't had a meet with 589 in two years. I hope to maybe get out there in the coming weeks and catch it again. I suppose playing your greatest hits, as it were, isn't always a bad thing.

Hello again, friends of the iron horse. Last October, I shut down the Beachburg Sub blog, thinking that I just didn't have any gas left in the tank (coal in the tender, perhaps?) due to my sheer exhaustion with the pandemic and my busy life in general. I pretty much said I was done, but you might recall I did leave the door open a crack.

Today, as I returned from the Railway Museum of Eastern Ontario in Smiths Falls, I realized I have amassed enough content, thoughts and photos for a pretty good run on this blog.

I am happy to be back again sharing some thoughts with you and a few photos I have amassed in the last year or so. I will start off with a declaration, however. I can't commit to anything permanent at the moment. I will begin posting at regular intervals (every two weeks) for the time being and see how far I can go.

The reason I am being careful about this reunion tour of sorts is that I honestly don't have much time to be trackside and I don't want to post on this blog if my thoughts and photos aren't up to my own standards. Plus, I know most people who read this blog know a hell of a lot about railways, so I don't want to insult anyone with half-baked posts and substandard photos.

Life in the pandemic, especially with young children, has made any type of trackside photography extremely tricky for me. Working from home has proven to be a blessing and a curse! So, what little I have I will share, but that's all I can guarantee right now.

So, what direction is this blog going to take? It will still be about Ottawa and beyond, but I think I will be leaning much closer to the beyond for a while. To be honest, I was tired of blogging about all the nothing that is happening in Ottawa. So, what's to come in the months ahead? I have some adventures to share from my sporadic time trackside in Bedell (Kemptville), Ottawa, Smiths Falls, Toronto and Sarnia. I have also been giving some greater thought to the expanding light rail system in Ottawa, although I don't know that I will pay it any great attention in this blog, as I find the topic rather tedious these days. Same goes for the never-ending exit of Canadian National from Ottawa. When will this railway finally pull out for good? It's anyone's guess. Will a short line railway take over here? Many feel this prospect is remote. I am somewhere in the middle between cautious optimism and outright skepticism. 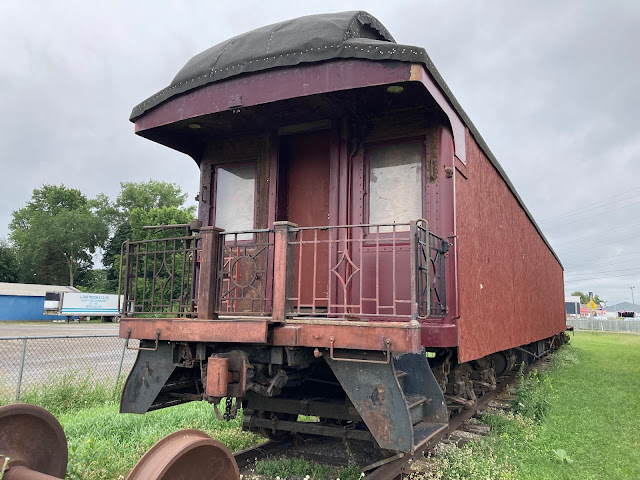 What's so special about this old warhorse of a passenger car? Stay tuned.

As always, I hope you enjoy what's to come. I have some material that I am very proud to share and explore in depth. If you are a regular, make sure to tell a friend and share the word that this blog has returned (for now, at least).

If you want to reach me, you can email me at hammond.michael77 AT gmail. You can always share your pictures if you want to see them in this blog.