The good news for my model railway in my basement is that the main line works and three spurs are essentially operational. There are rough spots causing derailments and the wiring is about 90 per cent complete. I have a rough idea of a piece of my town and a plan for a railyard and interchange track.

The bad news is I need a tonne of supplies and time (which I don't really have) to complete some of the important next steps. I'm trying to decide what next steps I can take with what I have. But I will share a few details of things I have done so far and give you an idea of where I found the inspiration in the actual railway operations I have photographed over the years.

A bit of context. I am not modelling any actual part of the CSX Sarnia Subdivision. Instead, I am taking elements from both the north and south ends of the line (Chatham had a number of rural agricultural customers while Sarnia had the industrial and petrochemical customers). There were points on the old Sarnia Subdivision that had both the agricultural and industrial customers. I am modelling what I would imagine to be a branch off the main sub that would include many of the elements one would have seen along this operation in the early to late 1980s.

One thing I am proud of is my maintenance-of-way spur that sits next to the mainline near the station. 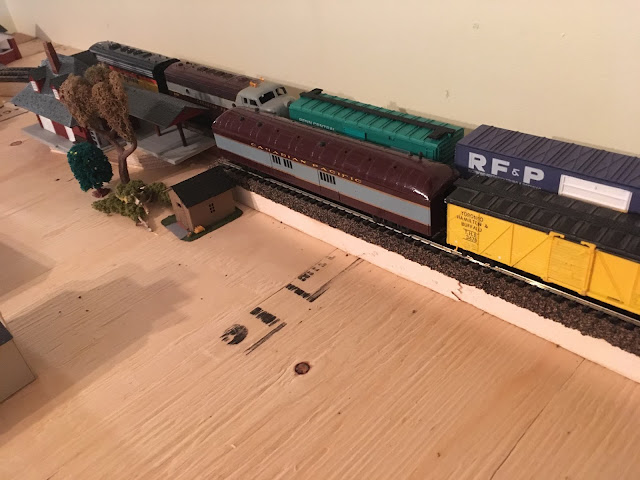 One half of the MoW consist has an old Canadian Pacific baggage car, which was not an uncommon thing for railways to use during this time. Since the Sarnia Sub intersects with the CP in Chatham, I took the liberty of blending both railways. You will also notice an old wooden TH&B boxcar. Some of these old wooden boxcars lived well into the 1990s as MoW cars. The photo below from the Sarnia end of the the CSX operations gives you an idea of my inspiration. I would love to one day put together a detailed C&O MoW boxcar like the one below, but the TH&B boxcar will have to do for now. It was once part of the CP empire, so it's a stretch, but I am not one for strict adherence to prototypical operations. I like to freelance a bit. 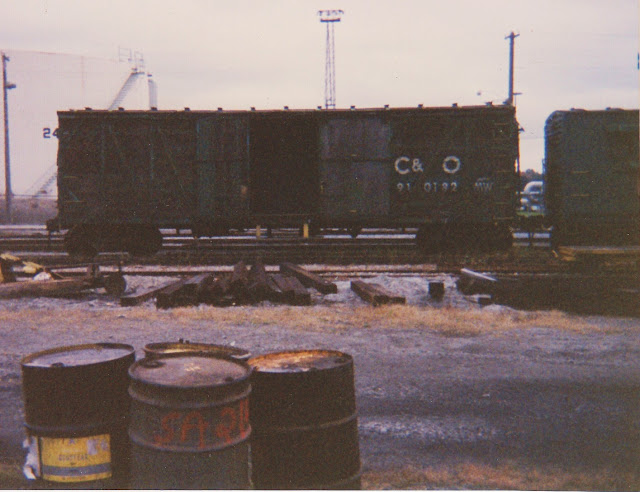 Here's the other end of the MoW consist. It features an old Cotton Belt gondola and a CP flatcar, which I built from an old Ulrich kit. I had to look up this company to see what it was. When I bought this car, I had never heard of this model train maker before. You can see the rooftop of an industrial building in the shot as well. I'm not sure what it is going to be yet. You can also see a short train on the mainline with AT&SF, Bangor & Aroostook, RF&P and a green PC boxcar trailing a set of F units. All of these boxcars, except the PC, were given to me last year by a friend who had them in his basement collecting dust. What a gift! 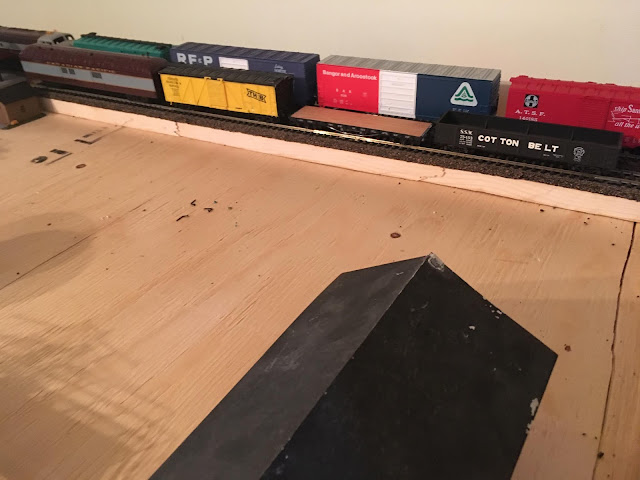 Here's a closer shot of the CP flatcar. It took a lot of work to put this 60-year-old car together and get it operational. The couplers that it came with I had never seen before. I had to put in a conventional coupler and modify the car a bit to get it to fit properly. 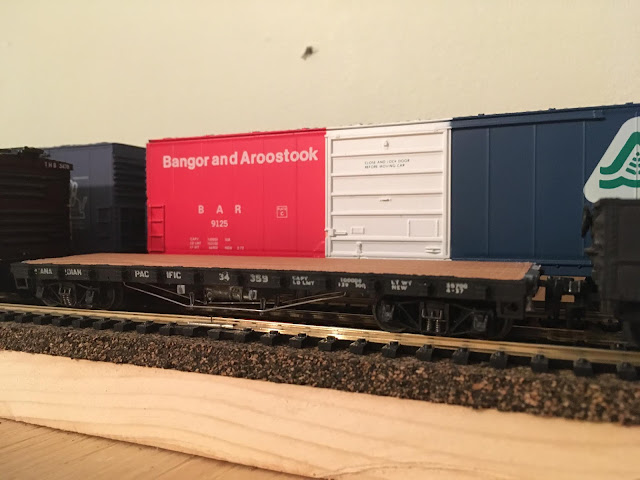 Here's a shot of a MoW gondola I saw once in Sarnia, which gave me the idea that I needed one on my own maintenance track.

Here's a final shot of the mainline train and the station spur, below. You can get an idea of the developing town from this angle. There are a couple of things to note in this shot.

One is I bought an extended platform kit for my train station but found that it wasn't needed for what I was modelling, which is essentially a small town. So I used the extra platform for a railway themed park across the street from the station.

The next thing is the Chessie System F unit. You will see that it is mated to an old vintage Canadian Pacific unit, which needs a lot of work to make it look a little more realistic. Again, the old CSX Subdivision from my youth did not include shared power, but there were instances in Southern Ontario, particularly in the case of the CASO Sub near Windsor, where shared power did happen. So, it's another liberty I am taking. To be honest, I was just testing the old CP dummy to see how it handled the tracks. It has a temperamental coupler in the back, but it's working really well so far. 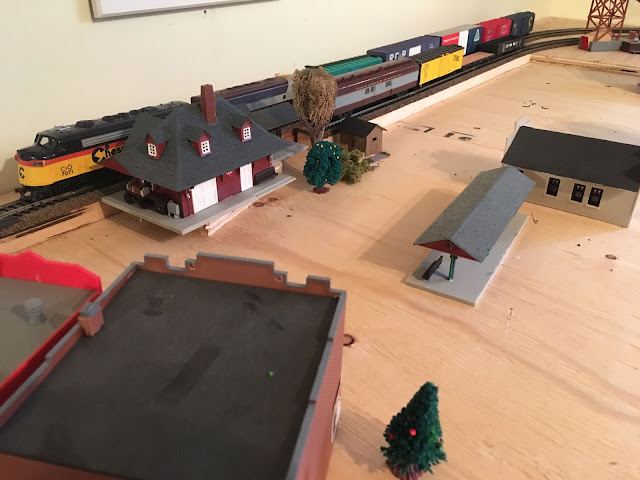 Try as you might, you will not find any real world example of a Chessie-painted F unit. I looked into it and discovered that the Chessie System did not retain any F units for revenue service, so this F unit is someone's idea of what it would have looked like if the railway had saved any of the covered wagons from its predecessors' long gone passenger service. The closest thing I found was that the old Seaboard System retained a set of F units long after it gave up its passenger operations.

You will also notice that the station is sitting on a block of wood. It will, of course, be elevated from the town, much like the Guelph Via Rail station is situated well above that city's downtown. The station is a common kit from Atlas. I like the look of it, since it reminds me of the old C&O station at the foot of Clifford Street in Sarnia, nestled behind the Esso refinery. The station looks different these days. Back in the early 1990s, it looked pretty rough. My station is a bit more tidy, for sure. 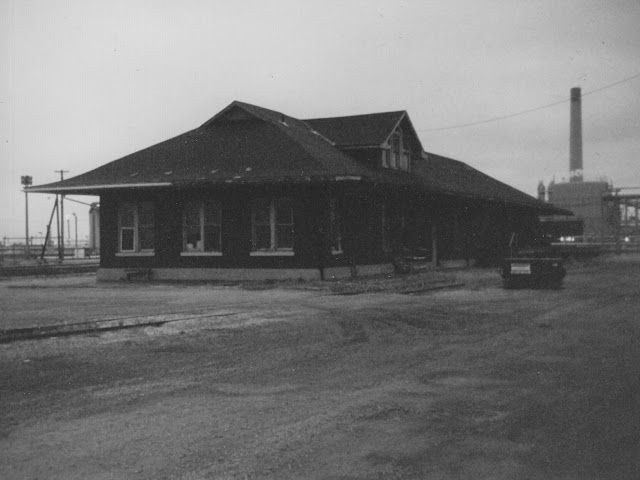 So that's one part of my set that could be close to getting some scenery in the near future, since it is pretty much set from a functional point of view. There is another part of that spur, which will serve a small farming operation. The building itself (you can see a piece of its power in the second last shot) is an old lumber mill, but it's generic enough that it can double for just about any old industrial building. I'm hoping to convert it into a feed mill, so I can use my hoppers and cylindrical hoppers there. That's a topic for another post.
Posted by Michael at Tuesday, May 12, 2020 2 comments: 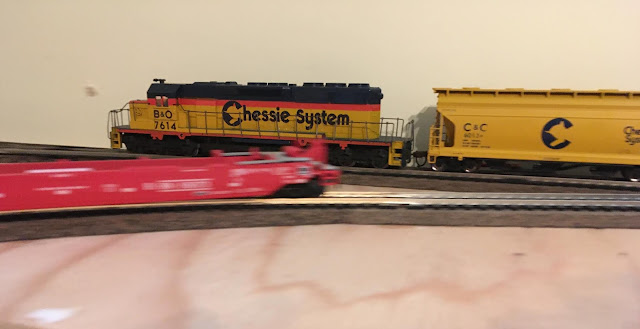