The Rise and Fall and Rise of a Railway Town

At the end of the summer in 2020, I visited family in Stratford and caught my first glimpse of the Stratford rail yard under CN control. It was underwhelming to say the least. In 2019, I was much luckier when I caught a GEXR train heading out of the yard and onto the Goderich Sub. In my two visits since, including last year's time in the city, the rail yard is really different.

I'm not going to say it's better or worse. To be honest, I noticed that the yard looked to be much more full this year than it was last year. I missed the CN local, which dropped off a long string of cars at one point over my stay, which appeared to be the only major freight activity on the Guelph Sub in my time there. I was disappointed, because most railfans in the area spoke of the healthy GEXR operations on the sub. That's not to say that CN has flushed all this progress down the toilet. The number of cars and activity in the yard suggested otherwise. There was a lot of work being done on the rails and the volume of cars was definitely high compared to 2020. 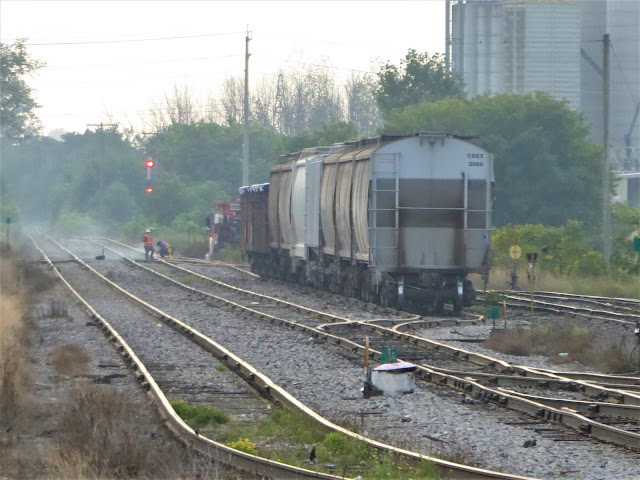 On my first morning at the station, I saw some CN maintenance of way workers welding a joint near the gain elevators. It was hard to get a decent shot, since they were quite fair away, but it was cool to catch some of the smoke coming off the welder in the early morning light. This type of work is always a good sign. All around the station, the railway properties that CN now controls seem to be much busier than they were when I visited here in past years. Several buildings beside the yard appear to have been refurbished and are hives of activity. Does this mean CN has plans for the Guelph Sub? Or it is catching up on deferred maintenance? I don't have an answer, but the signs of CN's increased presence were everywhere. 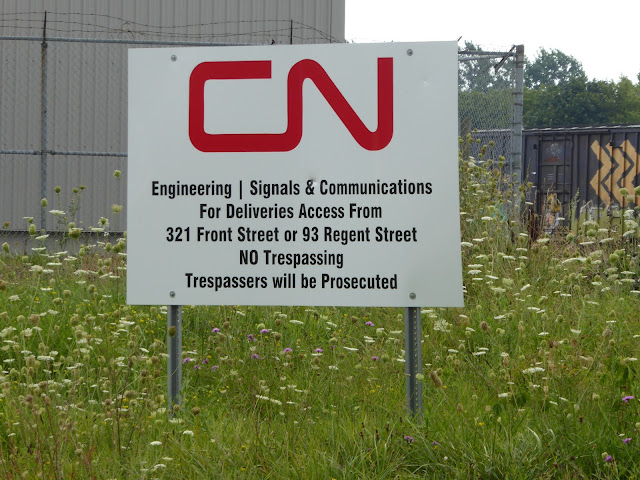 I also spotted this ballast car hidden behind a graphics and printing business on the edge of the yard. Again, these loaded cars, combined with the stacks of other railway maintenance materials next to the station had me wondering what CN's long-term plans are for this rail line. I had to take this photo on the shadow side of the ballast cars, so this was the best I could do to clean up the shot with a little retouching. 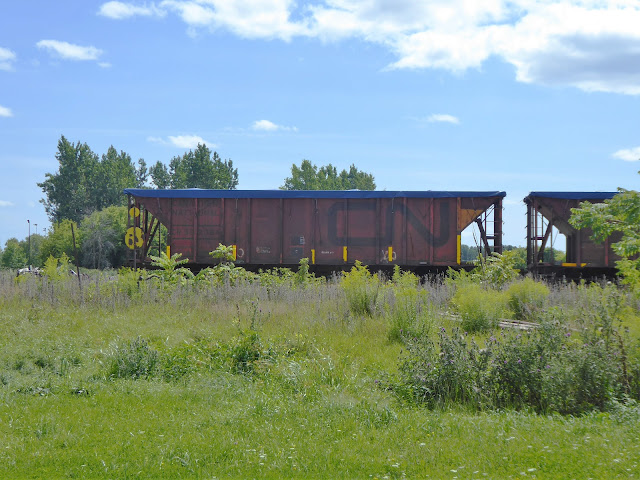 I mention all these observations because Stratford is a fascinating railway town. It was once a very busy division point in the days of steam when it serviced Grand Trunk's and eventually Canadian National's steam engines. The local Stratford museum has lots of information about the railway's influence in this city's development. At one point, it is estimated that 40 percent of the city's workforce was employed by the railway. That's a staggering number by any stretch. Even in the streets close to the rail yard, you can see the remnants of many industrial operations that owe their existence either directly or indirectly to the railway.

Of course, it would be unwise to suggest CN's takeover of the Guelph Sub after decades of GEXR operation is a sign of a railway resurgence. Many rail observers suggested that the Guelph Sub is now being used mainly as a relief route for the Dundas Sub, which allows CN to spread out its traffic during times when one line isn't enough. Via Rail continues to use the Guelph Sub, just as it has for decades. Via's Sarnia-Toronto service makes its way through this city in the morning and evening each day, as part of a milk run service that also serves other small towns including St. Marys.

While I was trackside, I did snap a few shots of the GEXR units on a stub end track. They didn't move in the four days I was there. That, to me, was a sad site. I did see one GEXR work crew at the yard briefly one day, but otherwise, the shortline railway appeared to be quiet. 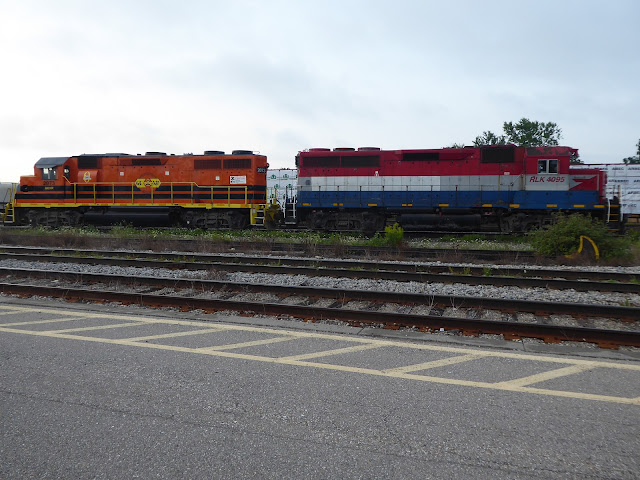 The GEXR unit was listed as a GP38-3, which means it has been refurbished and updated. It was pretty shiny. It was linked to a comparatively beat-up RLK (Rail Link) 4095. This unit has turned up online a number of times. It's an old GP40 that was once an Ottawa Valley Railway unit. It was originally CN 4004 in 1966. A bit of a relic. I don't know that I've seen many GP40s lately. I only have a handful of photos of these units, although they look quite similar to the ubiquitous GP38s. 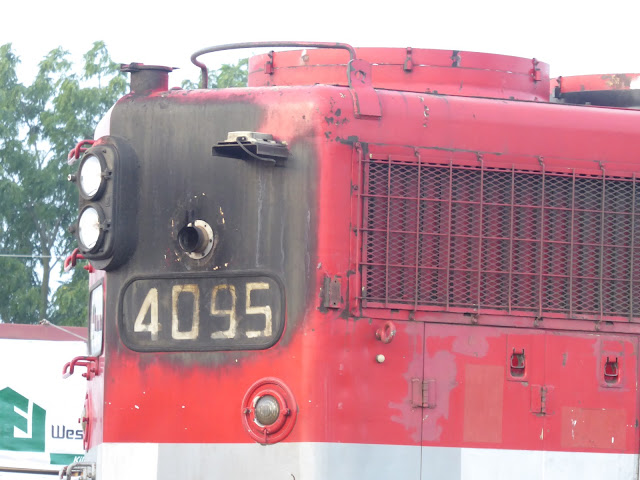 I noticed 4095 appeared to have some engine issues at one point. Looks like a small blow-out or fire. 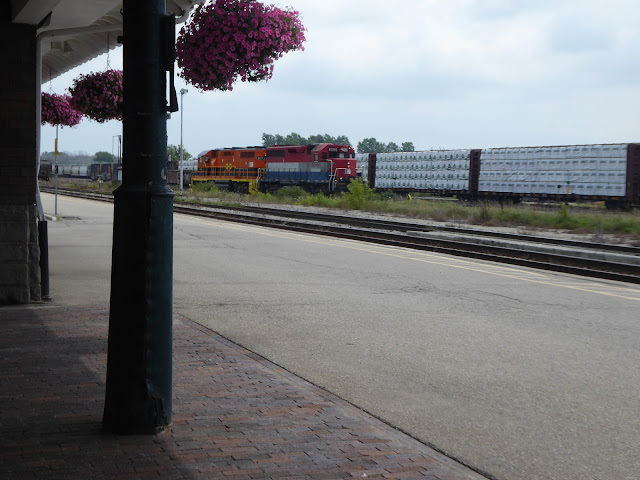 Since nothing else was happening at the yard, I took some time to frame some shots with the station in mind. Stratford's station has been beautifully preserved. You can see more shots of it in this previous post.

I also managed to take some shots of the rolling stock I found interesting, including the Ontario Northland boxcars. 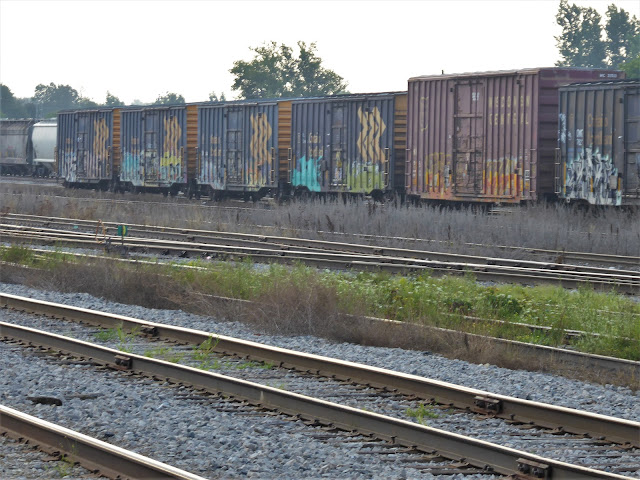 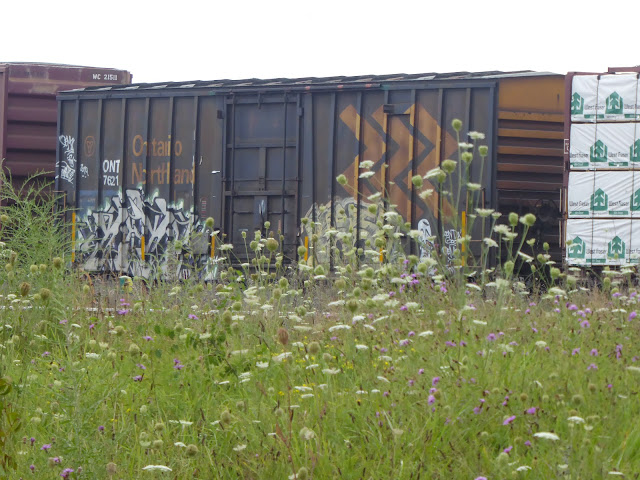 I did manage to catch some live railway action eventually, which was a relief as I was getting a bit bored of looking at this still life. You can only take so many roster shots. 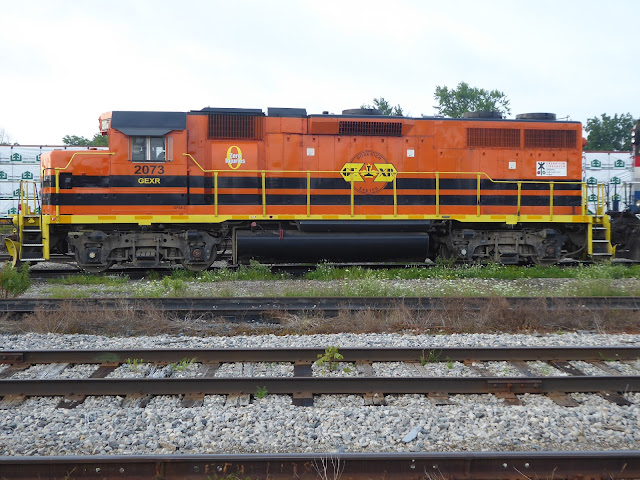 I will definitely be back in Stratford to visit family in the years to come. That means I will likely get a better idea of what is happening in this area with CN and GEXR. For a town that has risen to great heights and seen its railway industry virtually disappear, the re-emergence of CN is a curiosity at best right now. I doubt very much that it will change much of anything. Personally, I am sad to see GEXR diminished to what it is now, but maybe all the activity I noticed over my time in Stratford means there might be better days ahead for the railway in this historic railway town.