Railway stories: The reporter along the tracks

With the options for railfanning limited these days, I have been searching for some ideas to use for this blog. I have been cycling through photos and thinking of stories not yet told. Then it hit me. I have a number of life stories that somehow connect to the railways. I'm sure lots of people have similar railway stories, whether they know it or not. For me, I tend to remember more details of major life events when there is some sort of railway connection.

So, here's my first story. When I was in my early 20s, I lived for two years in Peterborough, Ontario. I worked for the local newspaper, the Examiner. It's a daily that is famous for once having employed Robertson Davies as its publisher. While Davies is certainly not my favourite author, I can appreciate his work and the cachet his name still carries.

In 2003-04, when I worked there, the Examiner was located in an industrial office building on an industrial road dubbed The Queensway. The building included a printing press in the back and the property backed up onto the Kawartha Lakes Railway line, a CP Rail shortline. This was the same line that once went through to Ottawa. The line now ends in Havelock. It is once again being looked at as a possibility for better, faster train service to Ottawa and Montreal (pipe dream). 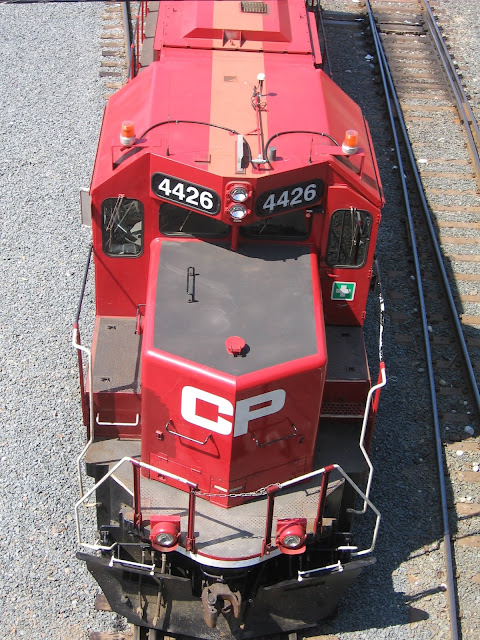 This is not a shot from Peterborough. In fact, I have no rail photos from my time there in 2003-04, but I thought I needed to show something. So here's a shot of a yard switcher in London, Ontario. It's a good example of CP's secondary power that was and is the primary power on the Kawartha Lakes Railways through Peterborough.

When I worked in Peterborough, the Kawartha Lakes Railway was a forgettable secondary rail line that saw limited, albeit somewhat regular, action. But it was never terribly busy. I do recall being at my desk in the evening and looking out the back window of our newsroom, which faced west. The setting sun was always a soothing site, but that window also offered a view of the rail line and it would always make me pause when a train came roaring by.

I also remember being held up mid-jog by a train that was hurtling by Lansdowne Street, being led by two old SW1200s that were pulling a surprisingly long load. That was the type of scene you could expect to see on this line at the time. Two yard switchers pulling a long freight train, working as primary road power.

I remember one night, a call came in on the police scanner, which was asking for officers to try and find two yokels in a pickup truck who had steered their truck onto the rail line in search of a deer they were apparently hunting. This was the type of local flavour that often coloured our police coverage.

To this day, I'm not exactly sure what to make out of this city. It was always an enigma to me.

But I think the clearest memory I have of those railway tracks was when the city was hit by what is known in weather circles as a cold low. It was a torrential rain storm that stalled over the city and dumped more than 100 mm of rain on the city in less than 12 hours. The result was that the city was flooded almost in its entirety. The flood only lasted a day, but its damage was immense. The story made national headlines in the summer of 2003.

The only way I could make it to work was by bike, since the roads were mostly flooded between my house and the newspaper offices. 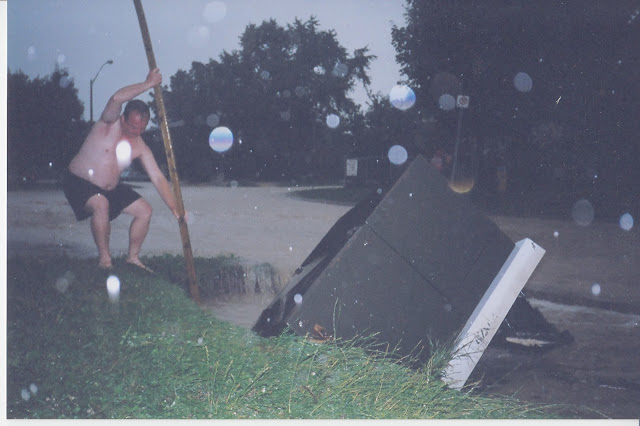 This was my street. A neighbour was trying to fish something out of the crater that had been created near the hydro box.

The day of the flood turned out to be one of the longest of my career. It was exhilarating and humbling at the same time. I remember biking down one of my local streets with the water over the front tires of my bike. I had no raincoat, so I had to wear a garbage bag over my clothes, just to keep dry.

My railway memory of that day happened when I was in the back parking lot of our newspaper offices and looking down the tracks, much of which were washed out and unpassable. In that quiet moment amid the chaos of that day, a young reporter came walking up to me, a recorder and microphone in hand. She introduced herself as a reporter from CBC Radio and wanted to know if I could comment a bit on what was happening in the city.

The whole time as I am answering her questions, I wondered, how did this reporter, most likely from Toronto, find her way into the city? The main routes into Peterborough were flooded. I also wondered, why was she walking along the railway tracks? I never asked her how she made it into town and I never did figure out why she was walking along the tracks.

It was a surreal moment in my career and one that I will never forget. Much of that has to do with the fact that it happened near railway tracks.