The Arnprior Turn has been a mixed blessing for this blog. On one hand, it really has generated a lot of enthusiasm among local railfans. It has also spawned a lot of discussion on this blog. On the other hand, it has at times overshadowed everything else that I wanted to share. Don't get me wrong, I'm not complaining. I'm just trying to describe my ambivalence toward this one lonely train.

The reason I sometimes stay away from posting too much about CN 589 is because someone from outside the city might get the impression that there is nothing else to see in Ottawa other than this lonely little runt of a train. No so. CN's freight operations east of Walkley Yard are much more extensive. After all, CN has to interchange cars at Coteau, Que. It also serves Ivacco in L'Orignal. These trains have never really been covered in this blog simply because I don't have the time to catch these freights. One day...

And, let's not forget that CN also operates 589 on the Smiths Falls Sub twice a week, for the most part, where customers like SynAgri and Kott Lumber require fairly regular drop-offs and pick-ups, depending on the time of year.

All this to say, there is more to railfanning in this city than the Arnprior Turn. However, I have pursued this train for several years and have caught it a select few times. The trick to catching this train is figuring out how much work CN crews need to do in Walkley Yard before they set off for Arnprior. But I have caught the train a few times and wanted to present a small photo album of my favourite shots from my meets.

In April 2015, I nearly caught the Arnprior Turn on its return to Walkley Yard. I say almost because I was a little late and watched the train pass over the Moodie Drive flyover as I waited at a traffic light. I was just on my way to a spot to photograph this train when it passed by me. This was the only really decent shot I got while waiting at the traffic light. It was the first of many frustrating experiences with this train. 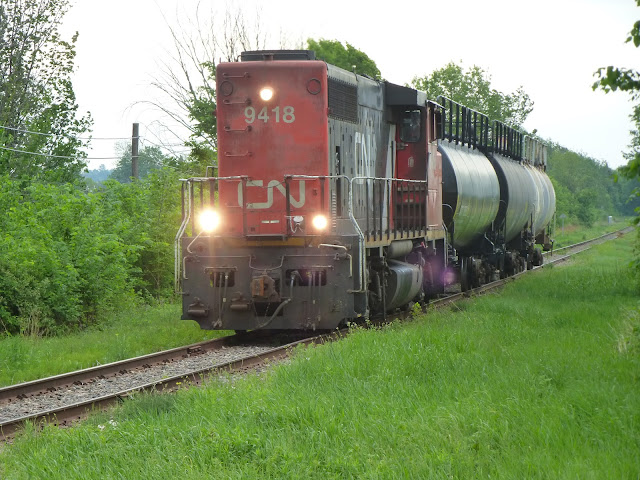 A month later, I had a morning to myself so I set off for a spot on the Trans-Canada Trail near Corkstown Road to catch this train. I had heard that it was passing through at a certain time. The tip turned out to be a good one, as I didn't have to wait long to catch it. This was one of the few times when I was able to catch the train at this spot. Its timetable often fluctuates, which means it will leave you waiting. And waiting.

I didn't have to wait too long to catch this train a third time. In September 2015, I was on parental leave and would sometimes take my baby daughter on a short drive before I picked up my oldest daughter from daycare. I often took a different route to the babysitter's house so I could pass by the Beachburg Subdivision's Corkstown Road level crossing. This was the result as a two-car consist was making its way back to Walkley Yard. It took a lot of photoshopping to touch up this shot, which was taken in some harsh sunlight from a parking lot near the crossing. 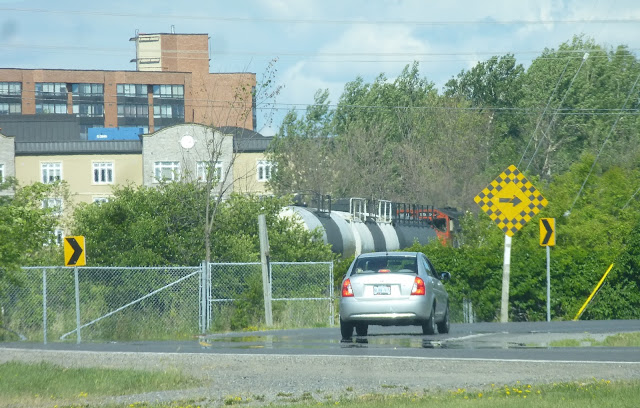 I mentioned that this train was a frustrating one to catch, right? In June 2016, I was taking photos near Fallowfield Station when I decided to head back to Bells Corners to set up for a meet with this train. As you see, I was just seconds late. Here you can see the train crossing Highway 416.

In February of 2016, I was on my way home from an early morning appointment when I was travelling on Northside Road, which parallels the Beachburg Sub. I nearly missed the train, but as it passed, I managed to pull over and get a few shots. I can't tell you how many times I have had near misses with this train. Thankfully, this hasty meet turned out okay. I got quite a few shots from this meet, but I liked this one. As I mentioned before, the changes in this train's timing often meant I have been left waiting at this spot only to realize I was not going to catch 589. 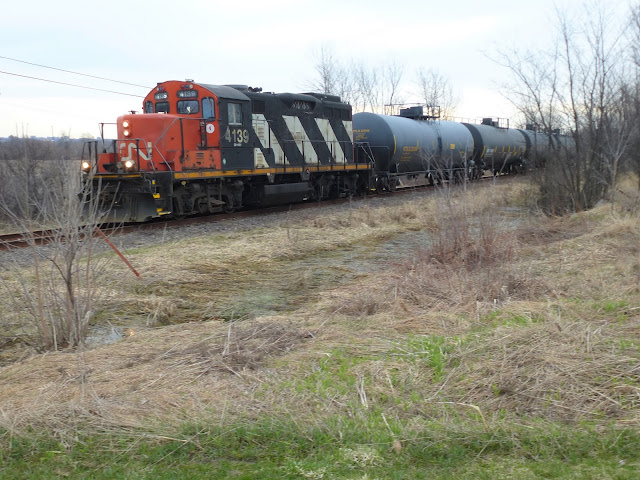 Since I have been back working in downtown Ottawa , I have not been able to even think of chasing this train. My last meeting with this train was again on the Trans-Canada Trail near Corkstown Road in April of this year on a day off. I really liked this shot because it captures a vintage GP9 in the old safety scheme pulling a four-car consist. This is the longest Arnprior Turn consist I have seen. The crew even gave me a wave. I would imagine they have a good laugh at the few foamers who bother to try and catch this train.

Great series of hits and misses, Michael. This diminutive train has become a cause celebre for The Beachburg Sub!
Thanks for sharing,
Eric

Thanks, Eric. It's been an experience trying to catch this train. Just this week, I got home early from work and heard it coming through my neck of the woods in Ottawa and silently cursed my timing.

The OCRR used to run a lot more regularly. Caught it interchanging with CP about 10 years ago in Pembroke. Wish my phone had a camera back then.

Oh, to have been there to shoot that. I miss seeing CP in the valley. A few times, I saw them screaming through Almonte. I wish I had taken a photo then.

You know I too often thought that if people from elsewhere in the country saw us all going nuts over the 589, they would laugh their heads off. But in all honesty this train is more about the experience of catching it. For example, anyone can sit along the mainline between say Toronto and Montreal. Sit there long enough and you'll see something (I got lucky this weekend when I was by and saw 3 in 40 mins - CP, CN and VIA). There is no real planning or anything. Just find a spot and wait. With the 589, you need to research, plan, get tips, scout a good spot and get out there. There are no casual or fair weather rail fans with the 589!
If it makes you feel any better, we have moved to Tunney's over a year ago and I haven't bothered to try to catch the 589. If only i could work from home like the gf......

Wednesday is the usual day for the train, goes out past corkstown around 10am and stops at the tim hortons on march & carling next to the Lonestar about 20 mins later. Comes back in the afternoon in the 4:30-5:30 window usually depending on traffic (as it has to slow crawl most every intersection as there are no barriers at all anywhere along its route) and how many tank cars it had in the morning. There's a nice spot to setup a tripod where the nepean junction used to be, along the corner where the beachburg sub split off.

You can easily access off the gravel bike path or from the forest trail behind the camp ground. There's a side trail just downhill from the "nepean junction mystery" as you called it.

The thing about this train is it doesn't go very fast. Shouldn't take long to over take it!

Thanks for the comments, everyone. I'm glad we're all still fascinated by this lonely little train.