When this year started, I was looking forward to the numerous festivities that coincided with Canada’s 150th birthday. I have to say in all honesty that this year hasn’t quite lived up to my expectations. For one, the weather in this part of the country has been pretty awful. The weather on Canada Day in Ottawa was the worst I can remember (and this coming from someone who once walked home from the fireworks show in the evening in shorts when the temperature was 9C).

So what went wrong exactly? Well, aside from the weather, I think that the year just didn’t live up to the hype. A number of official events were organized around Ottawa and were well received, but I didn’t get the sense that people were in the mood for much celebrating. I could be wrong, but I just didn’t feel much excitement.

There were some great moments this year, to be fair. And I will start with the railways. First off, Via Rail made railfanning fun again with their massive wrap effort. I have not had this much fun shooting Via Rail corridor consists in ages.

Make railfanning fun again! Westbound Via corridor train through Kingston in May with two sharp Canada 150 wraps. Photo courtesy of my wife, who was taking shots from the passenger seat of our car on Highway 401.

Both the Canadian National and Canadian Pacific rostered specials for Canada’s 150th, but I didn’t get to see either one of them.

The CN special arrived in Ottawa in May on a horribly grey, drizzly day. The train was chartered by the Big City Mayors Caucus, which is a group that falls under the Federation of Canadian Municipalities lobby group. The CN train included a few green and gold business coaches, but the train pretty much came and went unnoticed. There was no media coverage of the train. The only real attention it garnered was from local railfans who braved the elements and got some shots of this ghost train through the mist. The only reason I knew it was coming was because there was an  advertisement in the newspaper that someone at work handed to me, as an example of a type of advertisement I would be working on for a marketing campaign.


This video is from Ottawa railfan Blake Trafford's channel on YouTube. If you haven't checked him out, go see his work on YouTube.

The Canadian Pacific’s 150 train was a much bigger effort and created quite a splash when it arrived in Ottawa. However, I read a fair number of comments in social media from people who were disappointed by the event at the Ottawa train station on Tremblay Road. Many suggested the event wasn’t terribly well organized. From the photos I saw, the train looked great. Many of the coaches I saw on last year’s Holiday Train were in the 150 consist. 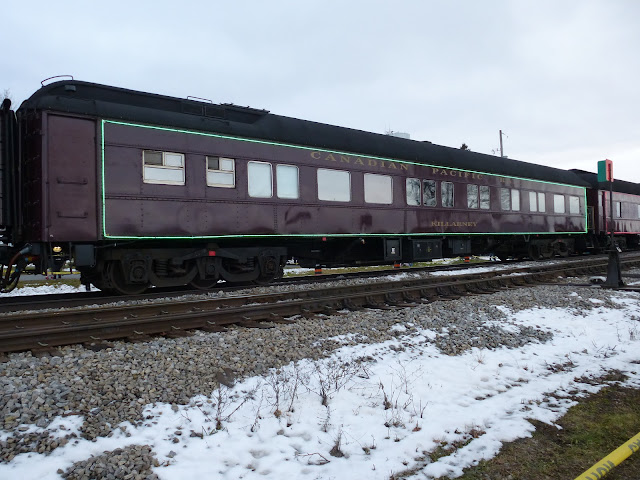 An example of the type of coaches that were part of the Canada 150 train this summer. This is a shot from last year's Canadian Pacific Holiday Train in Finch, Ont.

I was, sadly, out of town when the CP train made its way to Ottawa in a roundabout way (from Montreal to Smith Falls on the Winchester Sub and into Ottawa on Via Rail’s Smith Falls Sub). The trade-off wasn’t so bad, though, since I did more railfanning in London than I have in years. Five posts of London material later, I still have more photos to share, but they will have to wait for a while.

Even the week following the CP 150 train's arrival in Ottawa, a few of my fellow railfans told me that CP was keeping its train in Walkley Yard and urged me to go and get some shots, but I was working that week and had no opportunity to get out there. The train was, understandably, heavily guarded anyway. Lucky, local railfan Keith B. graciously shared a photo from his meet with the train before it left the city on Aug. 29, which I have been saving for this post. 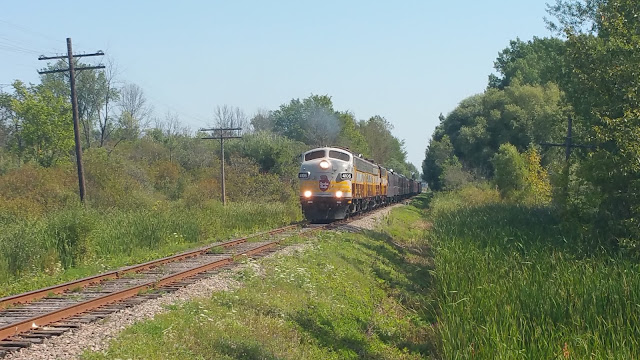 CP's 150 special heading out of Ottawa on the Beachburg Sub. What I love about this photo is it could have been taken in the 1960s. Timeless.

By the way, Keith is active on Pinterest. Do yourself a favour and spend some time there. There are great Ottawa railfanning photos there.

The other major disappointment for me is that my Canada 150 history posts have taken far more time than I had ever thought they would, so many of them will not see the light of day for a while. I did manage to finish several of them this year, but I had originally envisioned to do 10 posts or more. In case anyone was wondering about this series of posts, they will become part of an ongoing series that will continue indefinitely. As always, if there is anything you want to see me look into, just leave a message on this post and I will add it to the list.

On a personal note, I was disappointed with the fact that life has become busy for me this year to the point where my blog has taken a back seat to more pressing matters. I’m sure some people have noticed some longer gaps between posts. I’m grateful no one has called me out on this.

As I mentioned when I started this blog, my aim was to post material each week and I have tried to maintain that pace. I have found that pace hard to keep at times this year, mostly because of the pace of my own life and the utter dearth of railfanning that I often encounter in Ottawa. I have made the most of trips out of the city but I am aware that many people want to hear and read about Ottawa area railways. In the coming weeks and months, I am going to try to get out and take some shots around Ottawa.

I have learned, through maintaining this blog, to avoid making promises. I hope that the blog has remained relevant and engaging this year and will continue to serve as a forum and spot for local railfans and the many other scattered around Canada and elsewhere.

I will continue to try and keep the Beachburg Sub moving, but I’m hoping for your continued patience in the comings weeks and months.

Hey Michael, it sounds like you have blog fatigue.. it happens to everyone. You'll get through it.

I think we Canadians celebrated Canada's 150th birthday like we celebrate everything else... low key. I was happy to take advantage of free access to national parks and it was nice to see some Canada 150 livery on our VIA trains. I was fortunate to see the CP 150 train but I never saw the CN one.

I'll never bug people for more posts. I used to post a LOT in the first few years and then really ran out of enthusiasm in 2013, posting about a third as much as I used to. This year is going to be a record low number of posts for me.

Do what you can and we'll be happy to read them! :)

I write for a an old car paper. It get's tricky sometimes, but you just have to persevere.

Going to sneak out on the 27th and try to catch the CP Holiday train somewhere between Finch and Winchester. Hope the weather is decent.

Thanks, guys. I'm not sure I have blog fatigue as much as I can't always seem to fill the blog with enough material from around Ottawa. It's almost always a supply and demand problem for me. I have a limited supply of material from Ottawa and I am very demanding of myself. I'm just hoping everyone understands if the blog isn't as active as it once was, at least for a while.

Don't be too down. Let's look at some Beachburg Sub highlights:

-the above points more than make up for the dearth of railroading in Ottawa!

I've found it's much better to set a consistent, achievable blogging pace rather than a speed-up, slow-down publishing pace. Life does indeed get in the way of blogging (which is much better than the other way around!) so I try to keep a couple of drafts posts 'in the can' for those busy times that are overwhelming. Family comes first!

You're right about CANADA 150. Never seemed to catch on. Thank goodness for VIA!

Keep up the good work,
Eric

Thanks, Eric. I really wasn't trying to solicit praise, but I sincerely appreciate it nonetheless. I am doing just what you suggested. I am trying to create a backlog so I can take some time off and restock the cupboard and recharge the batteries. To be honest, whenever I feel a little discouraged about this blogging project, I almost always run across someone who has discovered the blog or says they rely on it for some reason or another. That truly makes it worthwhile. Now, to create that backlog!

We caught the CP coming in to Tremblay station. I agree that the event itself was disappointing mainly due to the amount of construction going on at the station. The other factor was that the event quickly became a concert, rather than a railfanning opportunity. This meant the crowd definitely changed into people who could not have cared any less about trains.

That's too bad. I think it would have created a good opportunity for CP to show people in a non-railroading town all about the history of this company and the ins and outs of how they operate their trains. I am thinking about the Via CFL Grey Cup train, where people could actually get on the train and look at exhibits. Amtrak did this for their 40th anniversary.