I won’t say I’ve come around to the city’s vision of the O-Train, but I have to say I understand some of the elements of Phase I better, having seen another city’s light rail system. Recently, my family visited Kitchener-Waterloo. As my wife attended a professional conference, I was able to spend some time in the city, where I lived for a few years.

My first impression of that region’s light rail system was that the north-south line was very much incorporated into the Kitchener and Waterloo city streets. I’ve long thought that we could avoid the costly construction of a downtown tunnel here in Ottawa by planning a smart rail corridor on Slater and Albert streets, two major one-way streets that bisect downtown Ottawa from east to west. These streets are cluttered with buses every day. It made sense to me that you could replace those buses with a surface rail line and still be able to retain a thoroughfare for vehicles. Of course, that vision died with former Mayor Larry O’Brien, who began to champion the idea of a tunnel.

When I saw the KW tracks running up and down King Street in parts of Kitchener and Waterloo, my first impression was that the region there is heading for massive traffic headaches. In some spots, these light rail tracks make sharp right turns and dominate busy intersections. In other places, drivers will be forced to make right turns off King Street by crossing the tracks, which are tucked away to the right of the street and separated by a small curb. I can foresee trouble with this system, based on my fleeting assessment. It looks much more like a streetcar line than a light rail line.

A friend of mine told me that the region has had troubles in recent months with delayed delivery of the Bombardier trainsets. So far, only a handful of trains have been delivered and have been tested on the new KW light rail system.

Ottawa, by comparison, looks to be in good shape. The fleet of Alstom light rail trains has largely been delivered and is being tested and readied for next year’s launch of commuter service, whenever that actually happens.

Recently, I was able to have a look at the progress of the Confederation Line on its west end. Most of my looks at the new system have been in the east end, particularly around the Via Rail station on Tremblay Road. The eastern half of the system is much further along in its development than the west end, but that is changing. 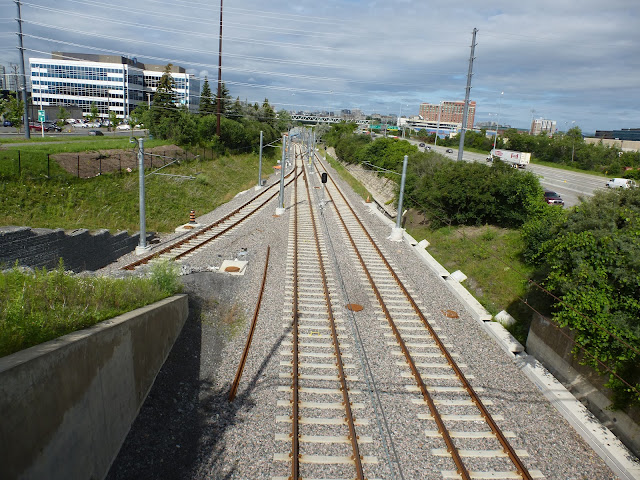 July view of the Confederation Line tracks near Belfast Road, near the Via Rail station

Catenary is going up on the LeBreton Flats. Rails have been laid in recent months. The Pimisi, Bayview and Tunney’s Pasture stations are all starting to take shape, including the roofs, stairs, walkways, platforms and other structural features. I know the Lyon and Parliament stations are also taking shape nicely, although that progress is not being seen, since both stations are underground.

I was walking in the area when I caught site of some maintenance of way equipment near Pimisi Station. It’s a good sign that testing might not be far off. 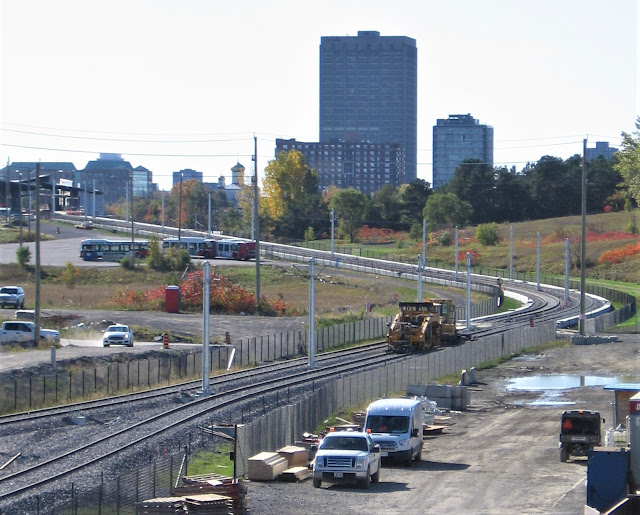 The poles are up, the MoW equipment is on the line and progress is being made. Those buildings you see in the distance are Tunney's Pasture, where the Confederation line will end next year. 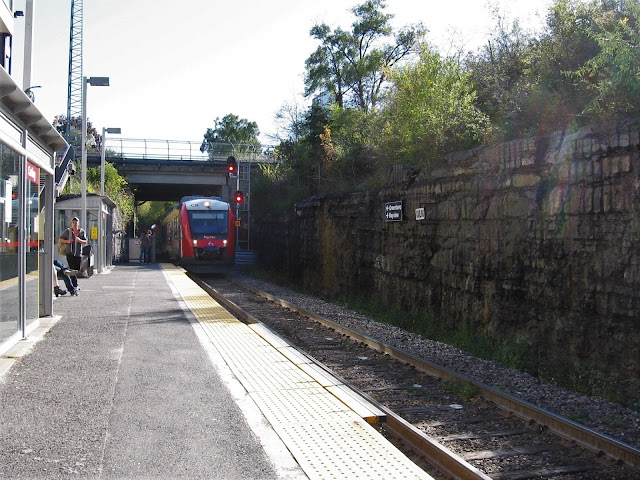 The city rolled out its Get Ready for Rail ad campaign in recent months to educate riders about how the new transit system is going to work. In many respects, the transit system we have now is a point to point system, but it will change to more of a hub and spoke system when the Confederation Line is operational.

The city has even asked residents to submit their ideas for train names, as each train will be named. I was told that “Trainy McTrainface” will not be accepted, but the appeal was made to children in particular, so who knows what direction that naming will take? I wonder if Thomas will make the cut.

As you get closer to the western terminus of the Confederation Line at Tunney’s Pasture, you can see the first signs of the catenary poles going up, as most of them have been erected. I am hoping in the coming months that I might be able to catch some images of testing happening on the LeBreton Flats section of the line.

Speaking of that end of the line, you can see the recently erected fencing that is preventing people from using the Prince of Wales Bridge as a makeshift pedestrian crossing. There were some fairly significant protests when the city finally came around to the fact that the bridge will be used for light rail, but those efforts did not go far. Common sense prevailed instead. 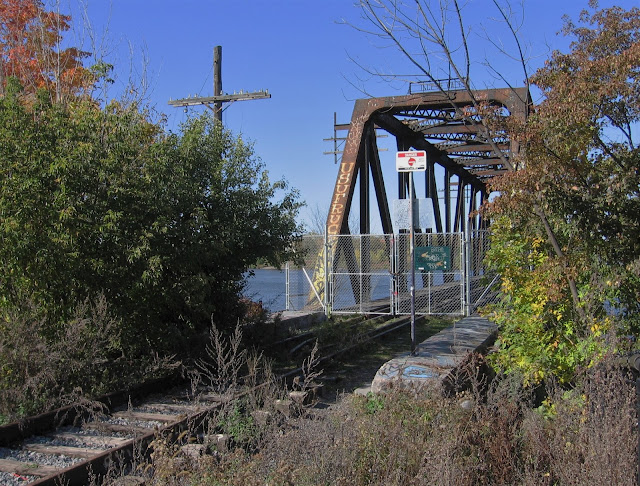 To be honest, I'm surprised it took the city this long to fence off this bridge, given the potential safety issues of people using it as a makeshift pedestrian bridge. 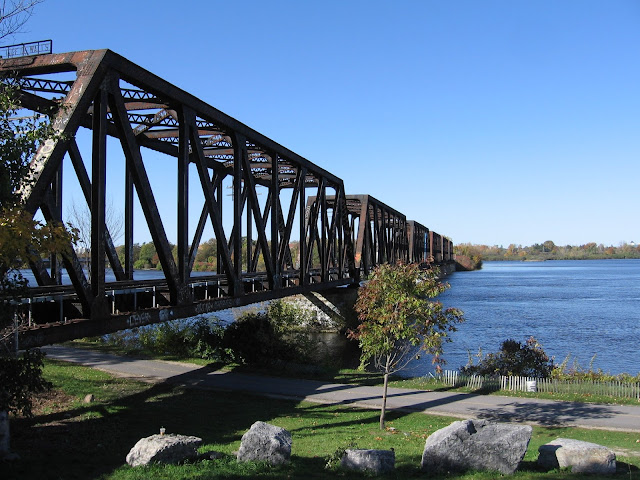 I would imagine that longtime residents of the city must be smiling to see the sight of train tracks back on the Lebreton Flats, after nearly 50 years absent. This section of the city has been dormant for so long and is now set to reclaim some of its rail heritage, which will in turn bring so much more life back to this longtime wasteland west of downtown. When you think of the new Senators arena, the new main branch of the public library and other projects taking shape in this area, you begin to understand how the ridership for the O-Train will develop.

My understanding is that traffic is very light on the Kitchener-Waterloo line due to the lack of train sets. I looked at the (very large) maintenance centre built in the area for the light rail vehicles and it looks lovely but unused.

I agree with you that the K-W line looks more like a streetcar line. In some ways it reminds me of Calgary's C-Train with the lines running down boulevards.

Time will tell. Thanks for the update on the Ottawa lines. Here in Winnipeg we are cutting bus transit routes just after we put in some bus rapid transit, and are actively building the second phase of bus rapid transit, so all is in confusion.

I saw that same facility, Steve. I agree that it's a good looking space but is not in use. My friend at the local paper tells me that the delays with Bombardier are basically holding up the launch of the entire system in KW. Here in Ottawa, the progress seems to be proceeding a little more smoothly.

I doubt ridership changes much. Unlike other cities, people primarily use the transit to get in and out of downtown for work. Where they see a dip in ridership will come at the point of convenience. If the new end results are not convenient and people have other alternate options, they likely take those. I myself am not too happy with some of the bus changes coming at the end of the month and am going to see how things go in Jan/Feb before considering if I go back to driving to work. Right now the bus is somewhat inconvenient as well as routinely (and frustratingly) full and I don't see the new trainline changing that.

I've seen a couple of pics of testing occurring on the east end of the line here in Ottawa, but have yet to catch it myself.

I'm glad that they decided to go underground in downtown Ottawa. As someone who had to sit in bus traffic jams in Ottawa because there was no grade separation, it will make things much more predictable.

Thanks for the thoughts Dave and AJ. Just thought I'd share that I did indeed see some track testing happening at Bayview Station this week. Sadly, I was on a bus so I had no time to take a shot.

Dave - I agree that the tunnel is the best way to go logistically, but my argument against it from the beginning was cost. I guess if I was in charge, I couldn't justify the sheer cost of the tunnel. But, now that we have it, I guess I'm on board.