This is the second in an occasional series telling the stories behind standalone photographs that don't otherwise fit within the themes of my regular posts. You can read the first postcard post here.


I'll be the first to admit it. I don't understand how some people obsess over steam locomotives. Growing up, whenever I looked at my train picture books, I would often skip over the pictures of steam locomotives because, to me, they all looked the same. Even now, I have a hard time getting all the excited about these giants. But, I never grew up with these brutes and I have never seen one in action.

Having said that, I have begun to appreciate steam locomotives much more in recent years. There are a few reasons why I have begun to come around. First, they are incredibly complex machines that are capable of incredible things. Second, they serve as vital reminders of the importance of railways through history. In many ways, these engines were the only lifeline people had to the outside world. Of course, the automobile and the development of freeways has changed the role of railways in people's lives, but these brutes serve as a useful reminder of how vital railways were to the development of Canada, the United States and a number of other countries (depending on where you are reading this). 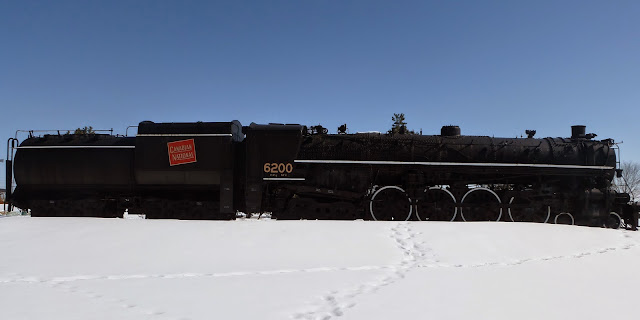 This shot was taken in early March 2013 on the front lawn of the Canada Science and Technology Museum. The museum is located on Saint Laurent Boulevard in Ottawa's east end. The museum itself houses a number of railway relics inside, although the museum itself is closed until 2017, due to mold and other safety issues that are being addressed via a large rehabilitation and renovation of the old bread factory.
This locomotive, Canadian National 6200, is a 4-8-4 Confederation locomotive more commonly known as a Northern type steam locomotive. Thirty five of these engines were built by the Montreal Locomotive Works and the Canadian Locomotive Works in Kingston, mainly for the Canadian National. They were in service until the late 1950s before a number were saved from the scrap heap. Other cities that have a Northern on display include Toronto and Guelph.
This particular locomotive was built in Montreal in 1942. It was acquired by the museum in 1967 and is one of a number of railway artifacts either on display or in storage at the museum. A number of other pieces are maintained by the Bytown Railway Society at this site. You can read more about these locomotives here.
For the most part, the engine is in decent shape. Many preservationists now argue that leaving these locomotives outside is not the best way to preserve them. I'm not sure what more can be done to preserve these artifacts, given their size. This locomotive is a popular subject for photographs in Ottawa. It's certainly a fixture on the museum's front lawn.
Just walking around this behemoth is an experience. Even though I'm not a foamer when it comes to these locomotives, I've grown to admire them because they remind me of my grandfathers, both of whom worked on the CPR when these giants were in operation. I'm glad it's there.
Posted by Michael at Thursday, November 12, 2015

I'm not a steam engine fan myself - for the same reasons.

I'm sure I've photographed 6200 as well on a trip or two to the museum. I always remember that loco and the big rocket.

I totally agree; steam never captured my attention the way diesels do. I visited the museum in 1989, mostly to see the CP C-Liner. Now there's a locomotive! Unfortunately, it too was outside and in quite sad condition. Has there been any restoration? A recent photo would be much appreciated if possible.
Cheers,
Andrew Kerr
Sydney, Australia

I love steam, mainly because it represents a throwback to a time when trains were king. By the time diesels came around, the writing was more or less on the wall for passenger travel, although it took another 25 years to really come to it's sad end with the VIA cuts in 1981. With that being said, I love diesels too, but they don't conjure up the same memories for people who spent their childhood browsing through train books collected by their dad.

Driving from Ottawa to Algonquin Park along highway 60 a couple years ago, it was easy to picture steam locomotives chugging along mere feet from the highway in many places. These lines were all but abandoned by the time the diesel came about (yes, the CN sub to Barry's Bay lasted until the early 80's, but the traffic on it was virtually nothing by that point, and I suspect was pretty minimal through the 70's as well). Similarly, the CP line west of Perth that made it's way through Kaladar and Tweed etc and the K&P (which I have snowmobiled on a few times) probably saw very little diesel action. Sadly, there seem to be very few pictures that I've come across documenting any action on these lines. When it does pop up, it's always steam!

FYI - The C liner is stored in a warehouse at the museum. I have a picture of it from a warehouse tour about 15 years ago. It was in sad shape, but at least it was stored indoors.

I'm another diesel fan myself. Never really got into the steam, although I do enjoy my grandfathers stories from back in the 40's and his childhood job of picking up milk containers and orange crates for local business owners off the daily train in Barrys Bay (funny Keith should mention that line). Coincidentally (and I am not sure how this happened) but my family got some of the former railway land in the Bay which was the prime place to pick blueberries when I was growing up in the 90's. I've driven the former line on a 4wheeler which is very scenic in spots towards Whitney. my favourite spots being around Madawaska just past Murray Bros and the halfway point between Madawaska and Whitney where the line travels close to the Madawaska River. I may never been around when the line was operational and don't feel much for steam, but around there I could easily see those old steamers chugging along the landscape and can definitely appreciate it.

Good points, all. Thankfully, there is room for all of us here. Thanks for your comments.