It’s amazing how seeing a few trains can make you greedy. After seeing an eastbound freight barrelling by Camlachie Road earlier in the week when I was visiting family in Southwestern Ontario this summer, I found myself looking for more. I drove my daughters and nephew around a fair bit that week, as part of my vacation. One sunny morning, I got my wish as I was driving down Mandaumin Road through the hamlet of Mandaumin. (Remember this post from Mandaumin from 2014?) My daughter and nephew both saw the familiar locomotive lights on the Strathroy Subdivision as we crossed the tracks. I decided it would be easiest to turn the car around and pull over a little way away from the crossing to get some photos, which is what I did.

And the train didn’t disappoint. 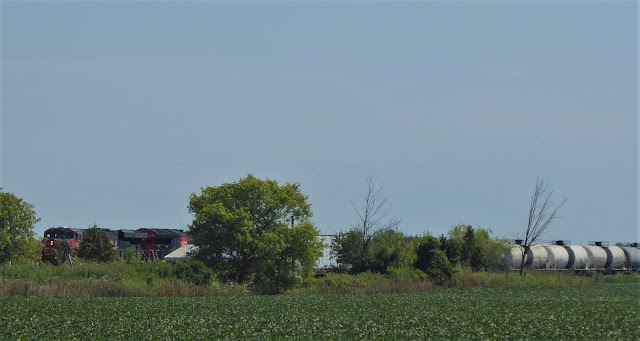 I have mentioned this before in this blog in recent years, but I find that giving yourself some space from the crossing is something that ultimately results in better shots. When I began taking photographs trackside several years ago, I often found myself leaning toward being closer to the crossing. Now, if the landscape permits, I find giving myself space allows me to get more interesting shots. I have never been one to just snap shots of the engines in front. I have always been interested in getting shots of the whole train where possible and getting shots of interesting rolling stock. This first shot above is an example. I like that the train is blending into its surroundings. You can also see a small farm shed behind the tree, right next to the front end power. 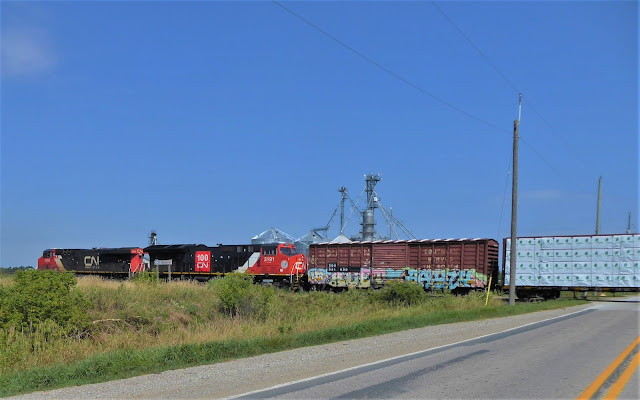 It's amazing how turning my camera toward a different angle can result in such a dramatically different sky. Case in point, the above photo. ES44AC 2999 and newly painted ET44AC lead the way with the trailing unit sporting not only the CN 100 logo, but also the Indigenous Peoples logo on the nose. I have to say that I find the railway's 100th anniversary logo a bit boring. Still, catching a new unit in new paint was cool. I was also happy to have caught the trailing Southern Railway boxcar behind the power, although the graffiti has largely covered over the boxcar's fallen flag heritage. I have to mention, as well, that I see more Southern boxcars than any other of the fallen flags still on the rails. 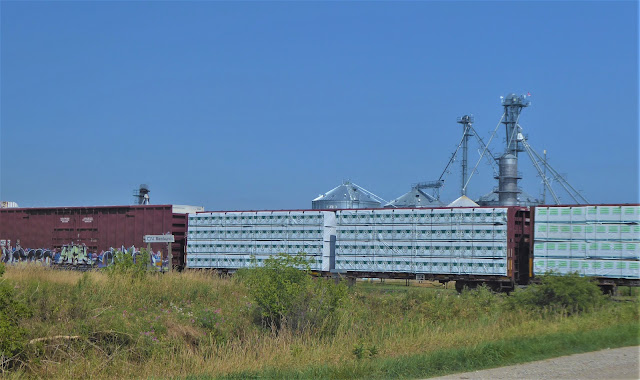 It wasn't long before I came along an articulated lumber car, one of many on this train. I haven't yet caught one of these cars, so I was happy with that. Notice also how the farming storage facility frames the shots. I'm not sure what that facility holds or who it serves, since there was no signage along Mandaumin and no railway service. Still, a nice element to have in my shots. 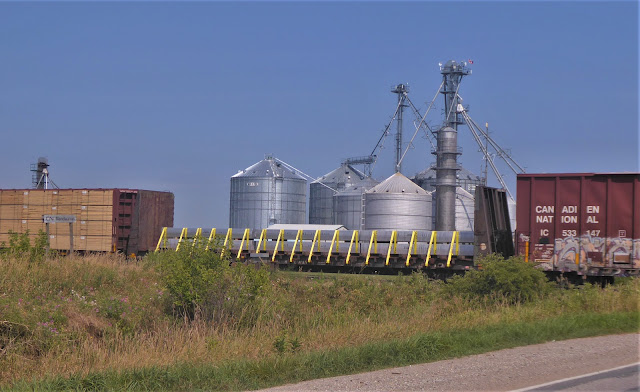 This flatcar gave me the opportunity to get a better view of the storage facility on the other side of the tracks. Looking at the image and the stamping on the flatcar's load, it appears as though these are concrete pilings or precast ducts of some sort. Just a guess 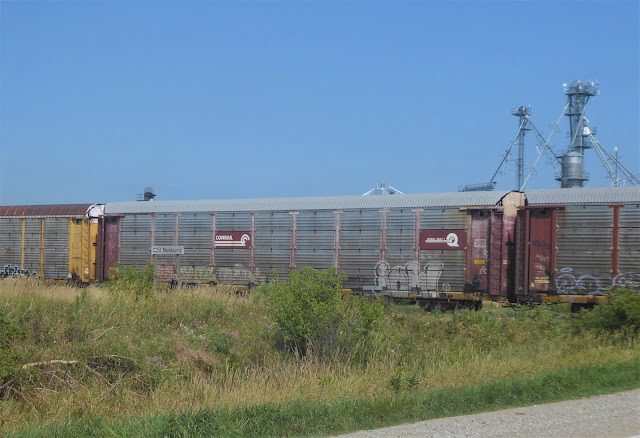 I know these are still common on the rails, but there will come a day when we will no longer see Conrail cars anymore. Same goes for the Conrail Quality logo to the right. Better to get a few shots before the fallen flag logos disappear entirely.  Whats seems mundane today, right? Also, I thought the autorack helped the CN Mandaumin sign stand out really well. 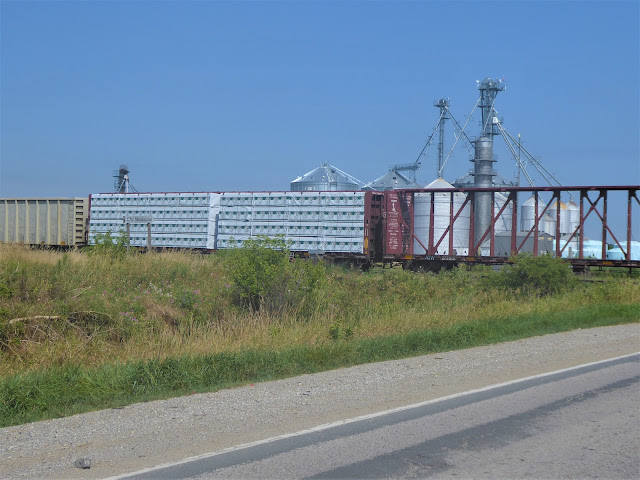 I snagged another shot of an articulated lumber car and an empty trailing car, just because. 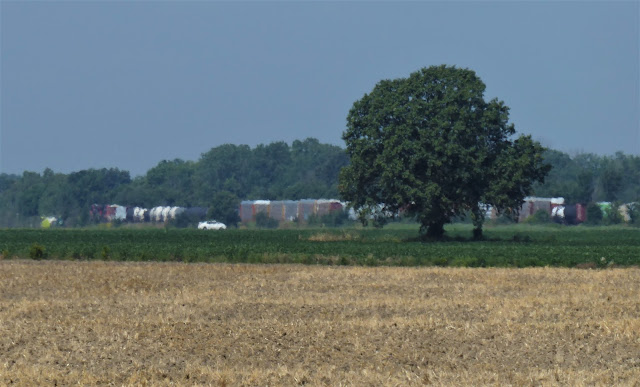 I decided to do something a little different. I framed this tree in the middle of the farmer's field with the train heading east in the background. That white car you see is a full concession over from where I am taking my shot. It is waiting for the train to pass Waterworks Road. The heat lines also give you an idea of how warm it was when I was shooting.

This shot also illustrates just how flat this area of Ontario is. It's like looking across a billiards table.
Posted by Michael at Friday, November 01, 2019

I believe those silver things that are on the flatcar are aluminum castings. I see them all the time coming from Northern Quebec on CN trains.

Good information. Seeing as how this train was westbound, that would make a lot of sense!

Yes, cast aluminum like those on the flatcar move routinely through Sarnia to the USA. I found the link to your blog via Traingeek.ca Interesting to see your entries featuring my city.

Hey, thanks for stopping by Jim. I am grateful to Steve for pointing out my site. I am originally from the Sarnia area (Corunna to be exact), so this city still features prominently in this blog.