This week, I am starting a new and likely occasional feature on The Beachburg Sub. I plan to offer a single photograph and tell the stories attached with that single image. I am doing this for a few reasons. One, I have a number of photos that don't really fit in with any particular theme. Second, I feel like this format allows me to roam a little bit and tell some stories that I am not always able to explore in more regularly structured postcards.

So, with that, here is my first postcard, from beneath a bridge in Sarnia's Chemical Valley. 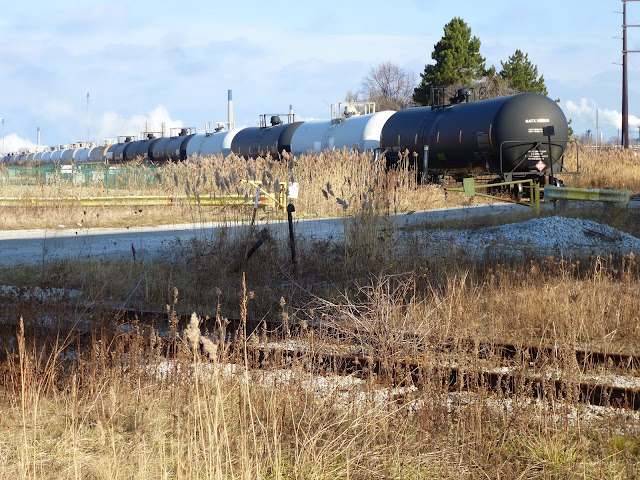 This shot, taken last Dec. 22, was shot beneath a bridge that carries Vidal Street above the CSX Sarnia Subdivision. You can see the shadow cast by the overpass in the shot. The road you see, partially in shadow, is the former stretch of Vidal Street, which once crossed three CSX tracks via a level crossing. That crossing would often produce traffic headaches as CSX trains would often block the crossing as they shunted cars in and out of the Dow Chemical refinery.

The overpass was built in the early 1980s to ease traffic flow and deal with safety concerns. The map below shows where I took the photo and gives you an idea of the track alignment. The old road just above the one labelled 33 is the former stretch of Vidal Street which once passed over the CSX tracks at a level crossing. 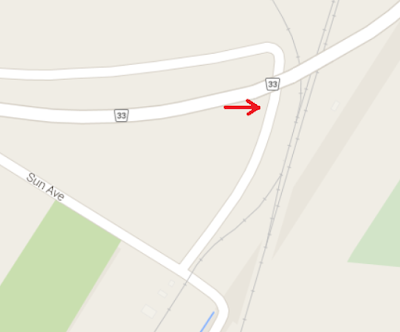 Fast forward to today and the old stretch of Vidal Street is part of a ghost town. The Dow Chemical refinery is long gone, having been closed in the early 1990s. In its place, all that is left is a vast expanse of concrete, old settling ponds, a few rail spurs and a small cogeneration plant. There has been talk of a business park on the old Dow site, but very little has happened here since most of the old refinery was dismantled.

That means this stretch of the valley remains pretty quiet, especially along the rails. CSX still uses some of the tracks here to park tank cars or queue them up before delivering them to other chemical plants further down the line. The image I took makes it look like the tank cars are parked on the main line, which is what I thought when I took the photograph. But the map shows you that this is not the case.

I vividly remember crossing these tracks when I was a child and often having to wait for the Chessie System painted geeps to clear the crossing long enough for my frustrated parents to drive by. Of course, as a kid, I was happy to sit in the back seat and watch the trains ply the rails. Sometimes, we would catch a glimpse of Dow Chemical's orange SW locomotive, which performed switching duties on the refinery's tracks.

Last December, when I visited this spot, I hoped I could catch something happening,  but this was all I was able to capture. I'm not a fan of photographing stationary cars, but in this case, the image sparked a flood of memories of busier times.
Posted by Michael at Wednesday, June 24, 2015