Sometimes, looking at things through the eyes of a child gives you a fresh perspective on life. I was reminded of that recently as I watched trains with my daughter.

I have largely been striking out in my attempts to capture CN freight trains around Ottawa, which has been a source of frustration. Over the last few Sundays, I have brought my daughter along with me. We have not seen CN 589, which often follows a Via corridor train south along the Smiths Falls Subdivision.

On May 3, we did catch this interesting Via consist as a P42 was helping a disabled F40PH-2. You can see the interesting angles that are possible at the McKenna Casey crossing. You can also see how Via's new renaissance paint scheme fits together between the F40PH-2 and the Business Class coach. The P42s still sport the blue, yellow and grey. I made sure to pull over in a little gravel lot, so my daughter wouldn't be too scared by the sound of the train. 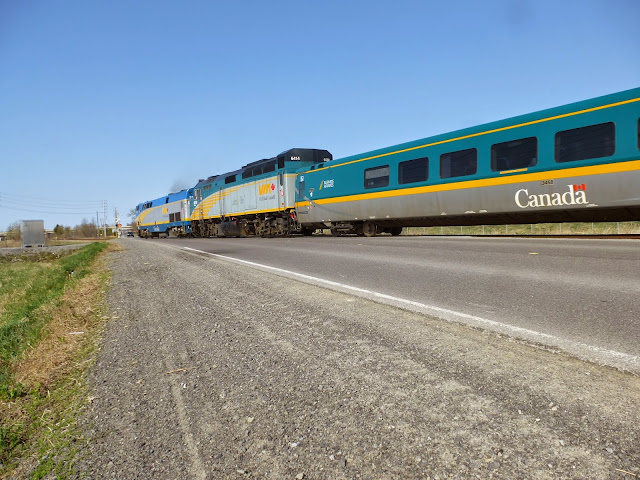 On Monday of the Victoria Day weekend, I brought my daughter along to the Fallowfield train station to catch another corridor train. I did this to give my wife and our newborn daughter a break at home.

When we were at the station, it dawned on me that, as mundane as it is to me to catch a Via corridor train, for my daughter, it was thrilling, particularly since she was able to get so close to the trains on the platform. My daughter told me she liked the 'green' on the train. Seeing things through her eyes, I took the opportunity to explain to her who the people were in the locomotive among a number of other things. I was able to teach her why we needed to stay behind the yellow lines. We walked along the engine a bit, which my daughter found fascinating. The two Via employees in the cab happily obliged my daughter by waving to her. I'm not sure how that tradition started, but it seems like a normal fact of life that engineers and kids instinctively know to wave to each other when a train goes by.

While at the station, I also was able to explain to my daughter why the train's bell was ringing and why its horn was blaring as the train crossed the Woodroffe Avenue crossing. They are big, powerful machines and can be dangerous if you don't respect railway property. This was a good opportunity for me to explain this to my daughter. 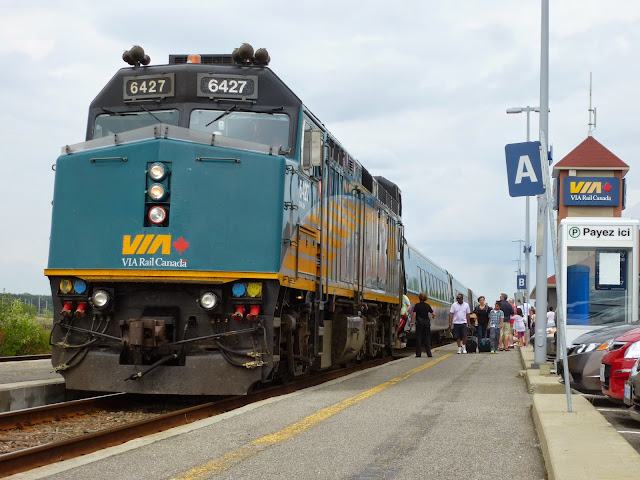 Yep, it was all new and exciting. Much more exciting than watching a train rush by the Moodie Drive crossing, which is where I have taken her on recent Sunday excursions. By going to the station, she was able to experience so much more. 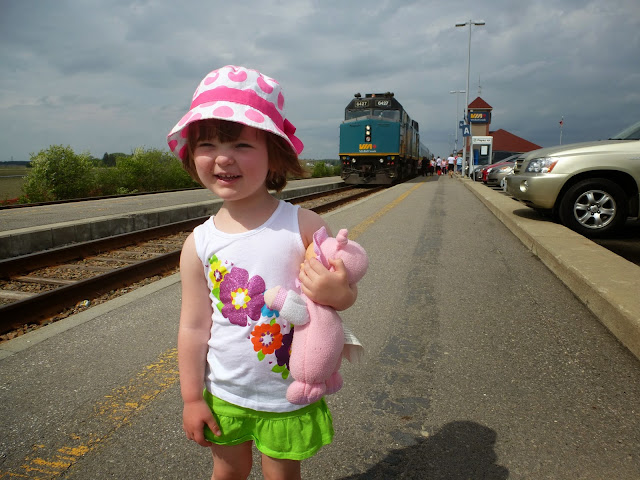 Here's a video I took of the train's departure for Toronto. Watch the cab window closely. A big thanks to the Via crew for making things a little more special for my daughter.


And as it left, my daughter was smiling and telling me, "That was a fun train, Daddy." 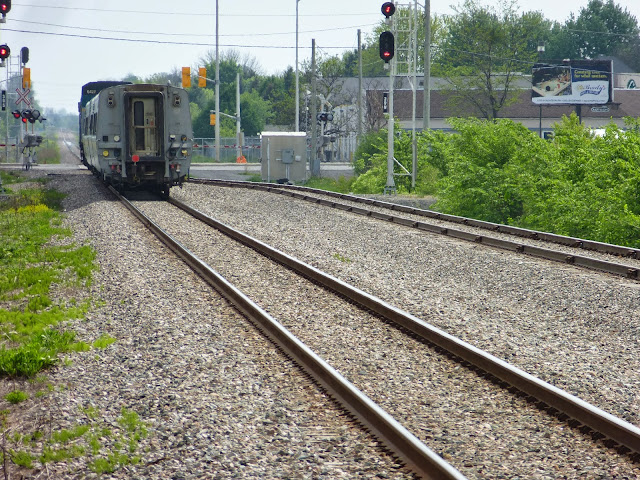 It was a good reminder that, despite my weeks of disappointment in not catching CN freight trains on Sundays, there is still a simple joy of sitting trackside and watching trains do their thing. I'm glad my daughter was able to remind me of this.

Construction work is progressing quickly at the Via Rail Greenbank Road crossing where an underpass is being built to remove a level crossing in one of the busiest stretches of the Barrhaven neighbourhood. This will also alleviate some safety concerns in the area, where a number of glitches with the warning lights and safety barriers have required extensive repairs in the past year.

Via is also busy preparing for construction of a passing siding at Wass, a stretch of track  immediately west of Via's Central Station. This passing siding is one measure the railway is taking to improve traffic flow and safety on its local tracks. Despite the lack of freight activity on Ottawa tracks, it's important to note that Via's Ottawa station is the company's third busiest in Canada.
Posted by Michael at Thursday, June 04, 2015

What a great way to experience trains - from your daughter's perspective. Thanks for sharing that (and that super cute photo of her).

Thanks for sharing this Michael. This a good example of how we can really learn from our young ones.

Very cool.
I hope to one day enjoy similar experiences when I have children. This will certainly serve as inspiration.

As for the rail news, I was surprised to learn that Ottawa was the 3rd busiest station in the country. I expected it to be behind Montreal and Toronto (obviously) but then either Winnipeg, Halifax or Vancouver. Go figure.

Thanks for the comments, everyone. It was a real treat to be able to share this time with my daughter. AJ - When you think about it, it actually makes sense that Ottawa is Via's third most busy station, even though it might not seem an obvious choice at first. Via is largely concentrated in the Windsor-Quebec City corridor. Its presence in some of Canada's larger cities (Halifax, Vancouver, Edmonton, etc.) is fleeting at best, since there is very little regional service outside of Ontario and Quebec. That would explain why Halifax (served by the Ocean) and Vancouver (western terminus of the Canadian) are not busy spots for the railway.

Any of us that are lucky enough to have a platform nearby have a great spot to learn and teach . Numbers, colours, locomotive models...the list is endless. But whether we're 8 or 80, there is always the motion as well as the unexpected nature of what we'll see.

We had more than our share of cookies tossed at us from F40 cabs when railfanning with our son. By the time our daughter made it to the station, the crews were keeping their mid-run Kingston snack to themselves, though waves were free! (In the late 70s, I was all about the odd signal flag or employees' timetable. But I was a little older...)

By the way, this just in from Kingston, VIA's fifth-busiest station. Hint, Windsor is #6.

Michael - When you dive into the reality of how VIA is set up with the QC to WIN corridor, you make complete sense. Still just seems odd Ottawa is so high on the list when you think of the overall rail activity around here. Not that I am complaining - we could use all the rail activity we can get for us rail fans!