In the first year of this blog, I shared two posts from a trip I made to Alberta in 1992. You can read about my railfanning adventures in this post and this post. That trip was a great experience for me because it was the first time I travelled on my own, even though I wasn't even 16 years old yet. From a railfanning perspective, this was one of the first times I specifically set out to take photos of trains and I'm glad I did. I was able to get photos of a CP grain train, the Rocky Mountaineer and the Lake Louise train station. These are among my favourite rail photos, more than 20 years later.

Recently, I was going through a number of old items that had been packed away when I discovered three postcards I bought while visiting Heritage Park in Calgary with my aunt, uncle and grandfather (the one who worked as a labourer in the Crowsnest Pass region). I figured I should share them and bring to a conclusion my series on Alberta, years later.

The first postcard features a shot of one of the park's former U.S. Army 0-6-0 steam locomotives (2024 in this shot, the other is 2023). The engines were in use as late as the 1960s in British Columbia for Pacific Coast Terminals' switching operations.

The railway is a big part of this history museum. The historic village has a number of railway items on its grounds, including a sand house, roundtable, roundhouse, water tower and railway station. The railway itself operates on a 4300 foot loop and comprises three locomotives and 30 pieces of assorted rolling stock. It's been so long since I've been there, I can't really offer many insights into this railway other than to confirm that I rode this train and enjoyed the experience. 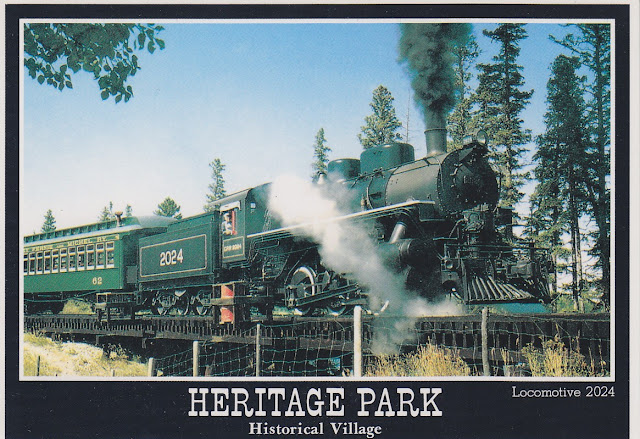 Here's a postcard that should be recognizable to just about any Canadian railfan. This is a shot of the CP Rail photo freight, which was staged a various sites around Canada at the time when the Canadian Pacific Railway adopted the action scheme and rebranded itself CP Rail in 1968. This shot, I learned, was obviously staged at Yoho at one of the famous spiral tunnels that the railway used to ease the grueling grade that trains had to mount to make it through the Rockies. This train was broken up into two pieces for this photo. The railway also took pictures of this train along the shore of Lake Superior and in the Laurentians in Quebec. The lead unit, 4242, was sadly never preserved and was scrapped when it came to the end of its life. Kinda sad that the railway never bothered to save the first unit painted in the action red. Here's a good piece of trivia. Can you identify the use of each of the boxcars you can see (red, yellow, green, blue)? I ask this because I couldn't without researching it online. 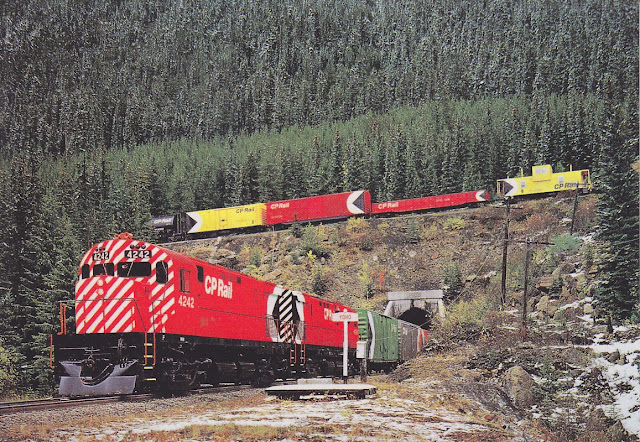 And one final postcard from the trip. This one is a collage of trains in the Rockies, including that famous CP photo freight, but you can also see a Via Rail triple header (all F units), a Via Rail train being helped by a CP high hood geep and a CP mixed freight that is not quite as photogenic as the photo freight. 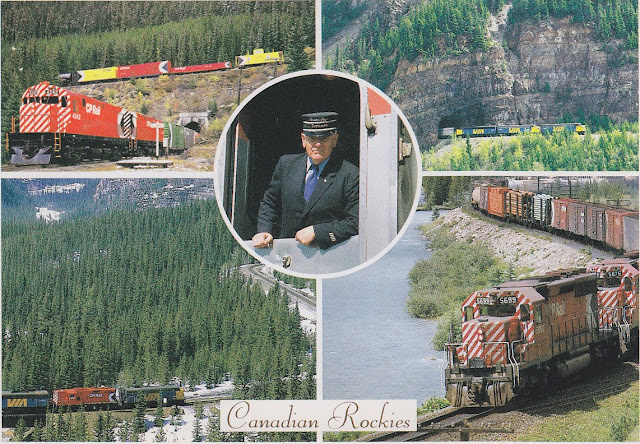 I know that I had these postcards displayed with my train photos in an album for years before I scrapped that album. I'm glad I kept them all these years later. If only I had been so careful with some of my own railway photos from this time.