As I mentioned last week, I recently headed out to shoot some railway action, even if it was just Via Rail corridor trains. The goal was to get some railway photos that are different or showcase some items of interest along the line. One of my favourite spots to get photos is an area beneath Highway 416 along McKenna Casey Drive. You can see my winter photo at this spot below or you can see a few more in this post.

As soon as I arrived, I had a few decisions to make. The first was do I zoom in like I did in this test shot below or do I use a wider shot to capture more of the train as well as the cows in the field? I decided to use a wide shot, since it would capture more and it didn't seem to wash out the sky either.

My next decision as where to set up. This is where this area presents a challenge. McKenna Casey has narrow shoulders, except for one stretch, which was luckily right where I wanted to set up. After I safely pulled over and away from traffic, I sat and waited in my driver's seat, since I knew Train 55 was due any moment after leaving Fallowfield Station. 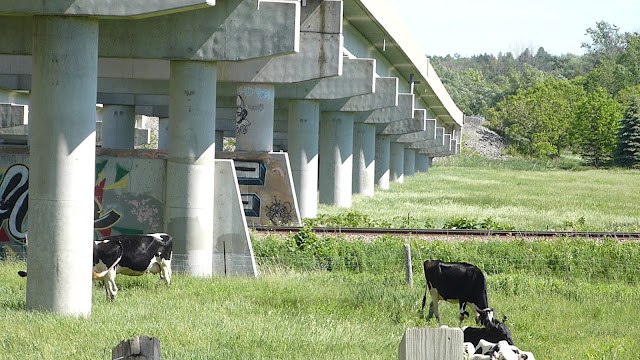 Here is the first of the resulting shots. The sky looks much better, but the compromise was I had to set up across the road and had to contend with the barrier, which was blocking part of my shot. I opted to keep the barrier in the shot because I wanted the cows in the frame as well. I liked the resulting shot. The next time I am there, I am going to try zooming in a little. If it is safe, I might cross the road and shoot from the other side of that barrier. We'll see. 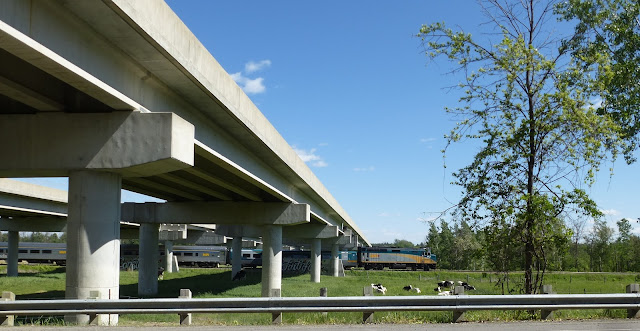 Here's a shot of the entire consist emerging from the Highway 416 overpass. The trees along the road presented another challenge, but I wanted a shot that captured the whole train. I have noticed that many of my shots of late are wider shots that encompass more of the train. 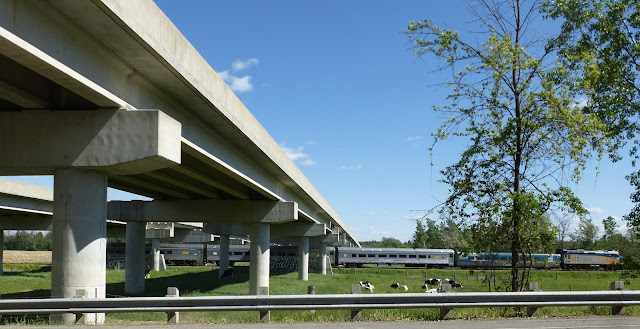 As mentioned, here's a February 2015 shot another Via corridor train heading below the 416. This shot was a complete fluke. I was heading toward the McKenna Casey crossing when I saw the signals flashing. I checked my rearview mirror and saw no one else on the road so I pulled over next to the barrier and got some stellar winter shots. Again, shooting from this side of the road is difficult and I do not recommend it unless there is no traffic on the road.

I thought I would share this last shot that shows the old streamliners gleaming in the sun. The cows don't seem to be fazed by the train. I think this has become routine for them.

So, that is my attempt to make some lemonade and break up the monotony of shooting Via corridor trains. As I mentioned last week, I am going to try and find some other interesting spots along this line that will make for some more diverse rail photography.
Posted by Michael at Thursday, June 23, 2016

I like how the train gleams in the sun.. the wider view is definitely better in my opinion.

I spent a minute or two on Street View in that location and, if it were me, I would shoot a little farther away from the 416 overpass and across the road so the guardrail / shoulder wasn't in the shot. I see there are some trees to work around so it might be a bit challenging to get a good wide shot without obstructions.

I've always contemplated trying to take shots from that location since there are some good leading lines with the 416, but i always found it hard to get an angle where there are no obstructions. Usually I just go up to the level crossing instead since it is easier to get the shot there. :)

Thanks Steve and Dave. I will continue to experiment with this location. As you both mention, it has its challenges but I think it's worth it.