Let's start with the obvious. Railfanning in Ottawa is not easy and it can be downright frustrating. Most railfans don't want to spend their time chasing around four-coach Via Rail corridor trains. Recently, I realized that I hadn't been out to shoot any trains in more than a month. And now that CN's west end freight trains (589 on Tuesday and Wednesday) seem to be combined at times, it means the chances of shooting freight trains is becoming a little more difficult. So, what is a railfan to do? Well, when life gives you lemons, you make lemonade, right?

I decided to head out recently just to shoot something. I went to Via's Fallowfield Station to shoot Train 55, which was due to arrive in minutes before making its way west to Toronto. The skies began to open up on my way to the station, but I immediately thought that this was a good thing. I didn't have many good shots of trains in the rain, so this would help create a little diversity in my rail photo collection.

A few other surprises resulted as I took some shots of Train 55 heading across Woodroffe Avenue. Let's take a close look at the shot below, which on the surface is nothing special. 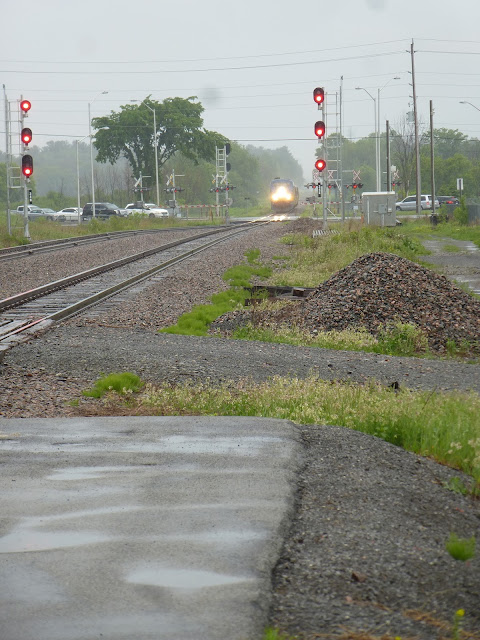 Most obviously, I decided to include a piece of the station platform in the shot to showcase the puddles and capture a bit of the rain in the shot. But I also made sure to fit in some of the trackside ballast pile and bundle of ties next to the pile. You may recall that I spotted some rail maintenance of way equipment in Richmond in this post. The condition of the line near the station seems to show that work has been done on this line fairly recently.

Here's another shot of Train 55 as it makes its way across Woodroffe. Notice the slope of the line as it approaches the station. You can also see the new signal equipment showing straight red for eastbound trains. 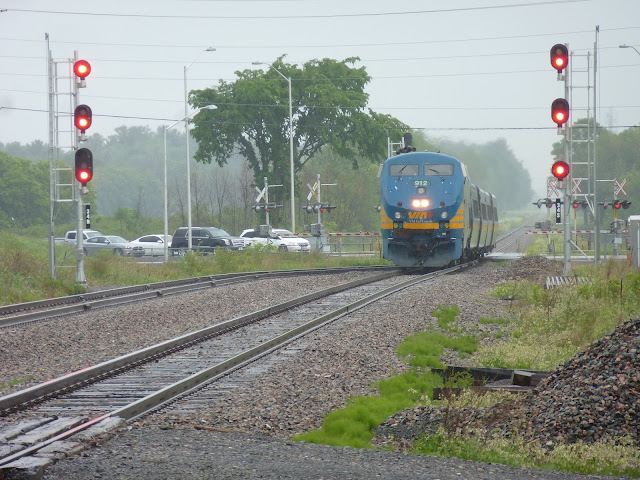 This is my favourite shot of this meet. You can see the reflection of the signals on the side of the train and the grade of the line is very clear in this shot. If you look closely, you can also see the rain in front of the locomotive. The train is being led by P42 912, which I am sure I have captured several times before. 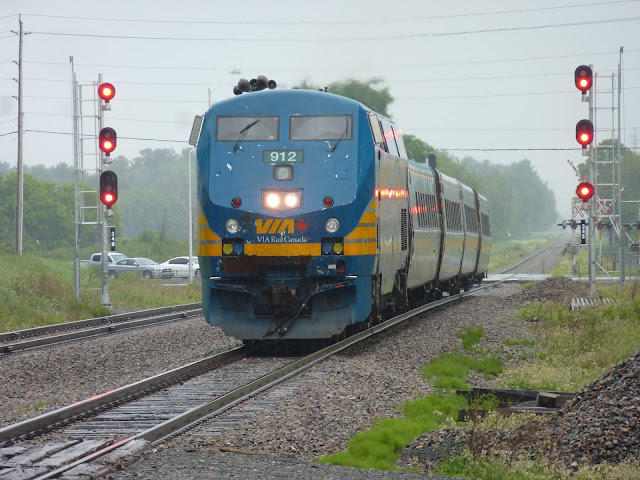 Now compare this shot of 912 with this earlier shot (2011) of 908 along the same stretch of line. In the older shot, you don't see the grade at all. This might be due to the fact that the older shot was taken a little further west on the platform. Still, I was surprised that I never got any shots of the grade before. The other big difference is the size of the consist. The older shot shows a consist that is between 6-8 cars long. 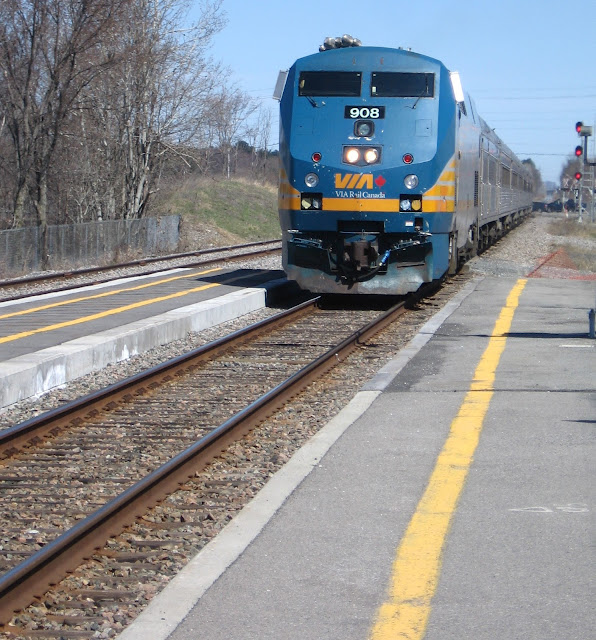 In the spirit of capturing different elements in my shots, I made sure to stick around as the train readied for departure. Just before it left, I captured this shot of a Via service manager (I have always called them conductors, but that term seems out of date now) on the platform making one final check before the train began to move. 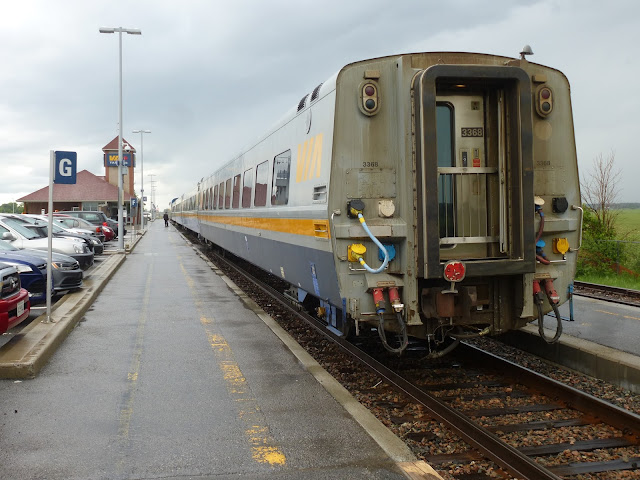 I was impressed enough with my efforts that I returned to the station the next day to try and capture some more shots. I changed my position a little, backing away from the platform, so I could lessen the wedge effect. The lighting wasn't as kind the next day, so this was about all I could muster. The interesting thing was the next day's train was being pulled by P42 913. Almost as if they had planned it that way. Other than this shot, I didn't have much to show for the second day. 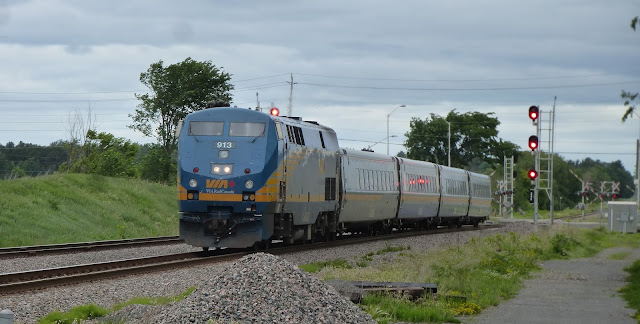 Getting back to the first day, I noticed that Train 55 was moving toward Fallowfield Road very slowly, so I drove to the opposite end of the Via parking lot and captured a shot of the train heading west. I'm not sure why the train was crawling toward the Fallowfield crossing. Usually, corridor trains gear up pretty fast out of Fallowfield. You can see the rain falling in my shot pretty easily in those little blotches in the sky. It was hard to shield the lens from the rain, but such are the challenges of shooting in the elements. This shot also captures the new signal equipment on the Smiths Falls Sub. 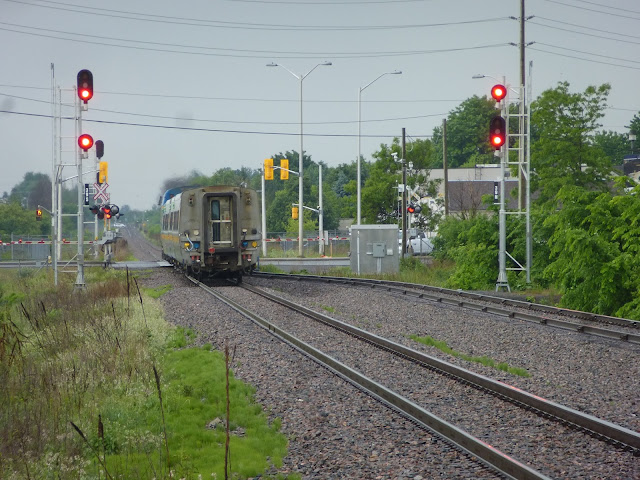 There were a couple of takeaways from these two days for me. One was, even if you don't think you are going to get anything new, it's always worthwhile to head out and take some shots. The next takeaway is to always think creatively. I deliberately sought out some different shots. Thanks to the fact that I changed my position on the Via platform and looked for elements other than the train, I managed to get some different shots. In next week's post, I will share some photos that take this approach further. I went out to a scenic spot on the Smiths Falls Sub and managed to capture something special.

One final thought. As several of my fellow rail enthusiasts have pointed out, CN seems to be combining its western freight service in Ottawa. Some have even caught 589 at Fallowfield Station on the siding. I intend to focus my efforts on this station in the coming weeks, simply to see if I can catch this freight train there. If you do see this train there, feel free to let me know and make sure to take note of the time you saw it.

Making lemonade, indeed! Good idea to vary your shots to get a little variety.

It looks like you had a little more telephoto in your recent shots which would exaggerate the grade.

We've noticed that the VIA trains passing through Richmond also travelling very slowly as they pass through the gates. So slow, my kids got very good views of the train from their middle row car seats! Keep up the good writing!

Perfectly and delightfully mundane indeed, Michael! Beyonce would be proud of the lemonade you made.

Did you ever consider standing on the pile of ballast a photo of the VIA trains arriving Fallowfield?
Eric

Wonder if the slow speeds are a safety precaution due to work on the line and the ongoing issues with the signals?

The east end really isn't any better for rail fanning, although I have managed to witness (my phone camera isn't too quick to warm up so I've missed a couple photo ops) some freight movement on the Alexandria sub this year. There are plenty of places where the track is close to the road, and just east of Carlsbad Springs it parallels Russell Road for probably close to 2 km.

I don't know the freight schedule, but it may be worth a trip out to the east end at some point!

Thanks for the comments, Steve, Eric, AJ, Pat and Keith. Let me address some of the comments.

Steve - you're probably right that the photo was due to the settings I was using. I often get low and crouch on the platform when taking shots, as well, so the photo might have been affected by the fact that I was standing.

Eric - Sadly, that pile of ballast was in a no-go zone safely behind a barricade, so I had to find other sources of elevation, which were pretty much nonexistent around the station.

Pat and AJ - Thanks for the added info. Pat, the last time I saw Via trains through Richmond, they were flying, so I'm guessing that AJ might be right in suggesting that the speeds in certain areas are restricted due to ongoing track work.

Keith - It's funny you mention Carlsbad Springs. I have seen more than one comment here that suggests this is the best area in the city to see CN. I didn't know there was a 2 km stretch of road that parallels the line. I need to find out when CN makes its runs out east to catch something in the east end. My blog is sadly lacking in photos from the Alexandria Sub.

Hi Michael,
I just found your Blog, and am enjoying it. Great Photos. I am a passenger rail junkie, and you certainly caught my eye, and probably unknowingly, also the general mood of the Fallowfield Station these days as well.
I live in Barrhaven... And since the tragic Via Rail / OC Transpo Accident back in September 2013 at this very crossing (just feet from where you were standing) there have been immense changes in and around this part of City of Ottawa, and the Via Rail Corridor. The track refurb & signals upgrades you've pointed out on your Blog since April, are just the tip of the iceberg.
As you know, there is also the ongoing construction of the rail & car over / underpass on Greenbank Road (first of several to happen in years to come). This would be one of the reasons you saw the train heading westbound at a low speed out of Fallowfield Station.
Personally, I try to avoid the Greenbank Construction Zone as much as possible since this project began, but on my last trip thru the area, I noticed that they had laid new track and the trains thru here would not be continuing much longer over "the island" portion that remained from the trench dig around the original track.
Plus, trains here just don't go thru the 14 At Grade Crossings (Woodroffe - Transitway - Fallowfield - Greenbank - Jockvale - Strandherd - McKenna Casey - Moodie - Cambrian - Twin Elm - Barnsdale - Eagleson - Ottawa - and McBean) at anywhere near the speed they used to. When you add in the Bike Paths, Trails & Sidewalks, the numbers of daily crossings are truly astounding for a stretch of track under 10 Kms in length.
So ya, Via going thru the area on a Weekday Aft with Construction Crews working up ahead, and it being a towards the beginning of Rush Hour (& kids getting out of school) you probably got a very good look at how things have changed in this community. The accident is very much still front & center, and very raw for most of us who live here. I think just about everyone looks at and approaches the Railway Crossings here with a very different frame of mind than we did 3 years ago.
A sad reality.

Hi, thanks for your comments. I did think that the reduced speed for the Via trains had to do with what you mentioned -- all the work being done to the Smiths Falls Subdivision. I also can appreciate your comments about that fatal collision. It still casts a shadow over Barrhaven and the rails that run through it.