I found my way to the east end of the city this weekend, which gave me a chance to look at the progress being made on the O-Train Confederation Line and the renovations to Via Rail's Ottawa Station.

The most interesting site was at Belfast Yard. I don't know when railfans in Ottawa can claim to have seen new rails put it place in this city, other than the odd siding or such installed by Via Rail recently. What you're seeing below is a small section of the Confederation rail line as it enters Belfast Yard, the site where the new electric Alstom Citadis Spirit trains are being assembled and tested. If you look closely, you can see the catenary over the rails and the signals.

Those who are following the progress of this phase of the LRT project know that the city held a press conference recently around Cyrville Road, where they showed off an assembled trainset that was being tested on the tracks.

Here's another shot, below.

Both shots were taken from the Belfast Road overpass, facing east. Unfortunately, since the west sidewalk is the only vantage point that is walkable at this time of year, I was unable to get a shot from the east side, which would have minimized the impact of the fencing that was hindering my shots.

You may recall that I got a peripheral shot of the construction of this facility a few years back when I was shooting an incoming corridor train at Ottawa Station. The shot below gives you an idea of where Belfast Yard is relative to the station. Those cranes were assembling the Belfast facilities at the time. In some respects, the LRT yard is a next door neighbor to Via. The shot below shows a westbound train from Montreal coming in to the station in January 2015. 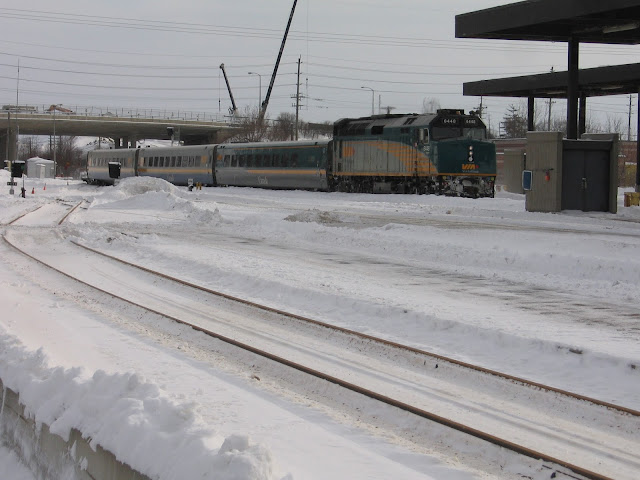 As you walk over the Belfact overpass, you can see where the Confederation Line dips below both the overpass and the Alexandria Sub trackage leading into the Via station. It's hard to photograph where the lines cross over, since no sidewalk access on the east side of the overpass prevents a good shot, so that will be for another day.

By all accounts, the O-Train project is progressing smoothly. This past year saw a few delays, one of which was caused by a massive sinkhole on Rideau Street in the downtown in late June, which flooded the O-Train tunnel and trapped a few workers for a short time. The sinkhole was fixed quickly, but the questions over how this hole formed are likely not going to be answered for some time. The last report I saw suggested that the tunnel was not a major factor. 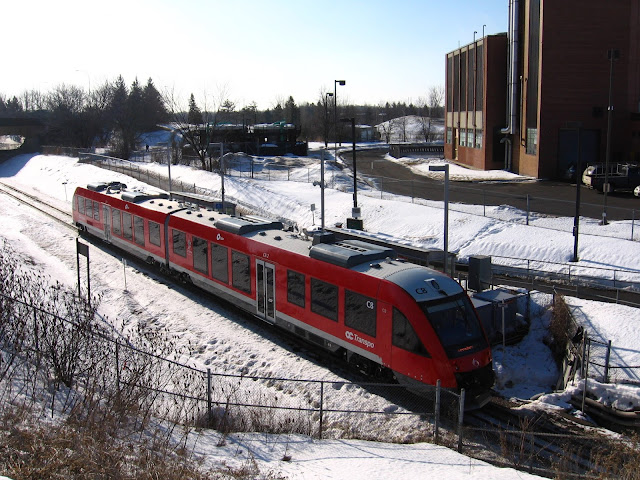 Speaking of the Via Rail Station, I did manage to snap a few shots  of the action Saturday morning through the fog. The tracks were pretty full, judging by this shot I took from the Belfast overpass. 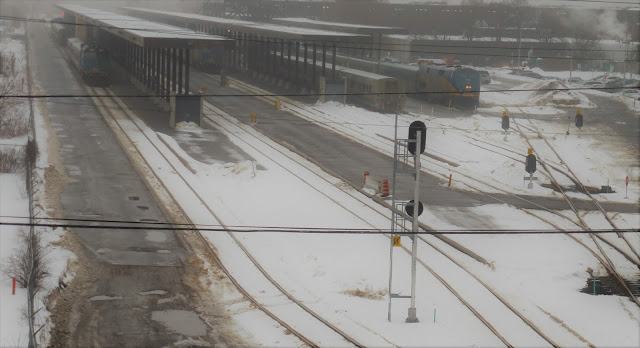 The fog really didn't help my cause from this vantage point. The wires are still a pain, too! But if you look, you'll two trains the south track (left) and two more on the right side of the picture. There is one on the centre track, hiding beneath the canopy. That's five trains at the station at once. That P42 is just about to leave for Montreal.

A little later, I drove down Belfast Road and was able to get up to the fence by the tracks to get this shot of two generations of Via diesels. The new diesel, P42 904, has the old blue and yellow paint while the older unit, F40 6446, has the new scheme. Those paying attention would notice that 6446 was the same train in the shot I shared above from January 2015. I was lucky that a huge snowbank allowed me to get a little elevation and get a shot over the chain link fence. 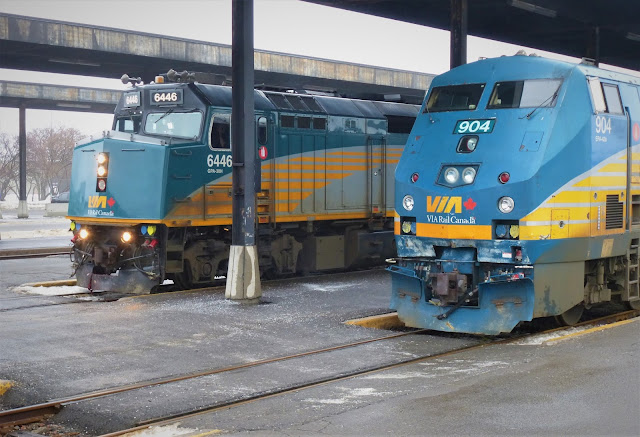 Just about a minute after I got the family shot, 6446 was on its way to Toronto, as seen below. 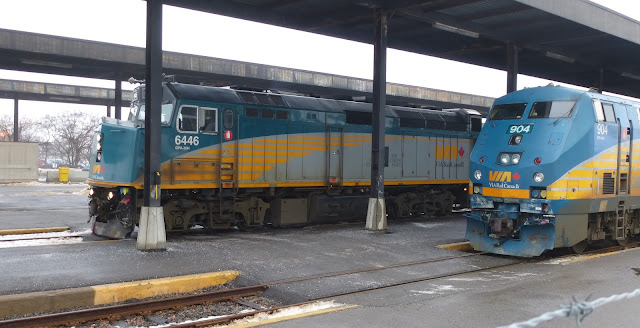 I didn't notice a whole lot of work being done on the platforms (read about the station renovations here), but there were some construction vehicles and some boarded off sections of the platform, which at least suggests that work has started in some spots to raise these platforms and enclose them from the elements.

I just hope the renovations don't ruin the vantage points from local rail enthusiasts.
Posted by Michael at Saturday, January 21, 2017