Guest post: The railway spur with a little of everything

My brother recently caught up to a tiny train on CN's Point Edward Spur in Sarnia's downtown. I asked him to share a few thoughts about what makes this rail line such an anomaly in today's railway industry. - Michael

There is an old, and lightly used spur that connects Sarnia’s main yard to the government docks on Sarnia’s harbour. The harbour is used to berth ships for major overhauls and winter repairs. (insert sentence about the elevator?)


I was downtown on my lunch, and heard the horn of an engine on the spur. It’s a loud sound in a quiet downtown. I made my way to Front Street and followed the train, stopping along the way to take a few shots. It’s a rare sight to see trains on this spur. My friends who live in the area tell me it’s a few trains a week, during high season. I just missed the train crossing the road.


Shot looking South, at the South crossing on Front Street, approaching London Road. Engine pair is heading away from me. Sarnia’s “Celebration of Lights” has a locally famous display during the December evenings. Note the displays in the park.

The track heads down, and the road continues up on the ridge.  There are many places to catch trains on this spur, as it winds its way through downtown.Continuing South, running in behind the SNC Lavalin building. SNC has a large engineering presence supporting Sarnia’s Chemical Valley.

On the other side of the SNC building, the pair emerged. No Photoshop here, Sarnia has some of the most beautiful blue waters in Canada.

I continued down Front Street a few blocks, aiming to hit Ferry Dock Hill (betwwen Cromwell and Davis St). Ferries no longer arrive here, but it’s a name going back to Sarnia’s major port history, where passenger and freight ships would arrive here.  This old spur has a lot of history, as Sarnia’s waterfront used to house a Salt Works, Lumber Mills and some small scale petrochemical industries.
The trains on this spur travel so slowly, it’s easy to get ahead of the train, even when you hit red lights.

I like the mix of old/new here: The first tower in the centre of the shot is a condominium building. To its left is an office tower. To the immediate right of the locomotives, you see some old brick buildings that are still fairly typical in Sarnia’s downtown.  In the background (behind the engines) you see the famous “boat building”. An apartment high rise built in the 80s as a nod to Sarnia’s nautical history.

Many of Sarnia’s historical buildings have been lost in the name of “progress”, and some due to the tornado that ripped through in 1953. 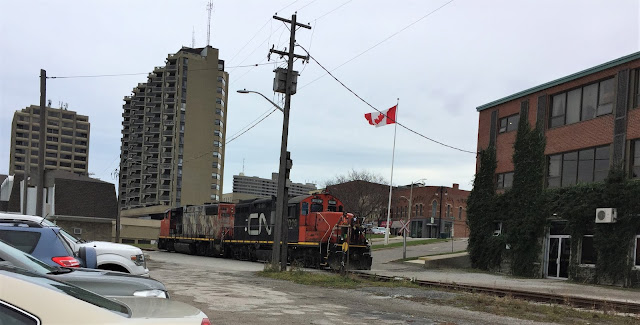 As you will see, this track is not protected, and is surrounded by a beautiful park, walkways, office buildings, parking lots and uncontrolled crossings. I have not heard of any problems, due to low traffic volumes, slow train speeds and residents that understand the rules. All my shots were well off the railway right of way.  My meeting was by chance, so all I had was my phone and a cloudy day.
Looking South, as the pair heads back into the Sarnia yard. You can see the gravel docks down, and to the left. This site used to house the CN Ferry for oversized cars. That ferry was used until the opening of the new Sarnia - Port Huron tunnel.

You can also see the stacks from Imperial Oil, one of Sarnia’s oldest and largest employers. The Riverport is seen to the left, on Front St.  A “Gentlemen’s Club” so I have heard. 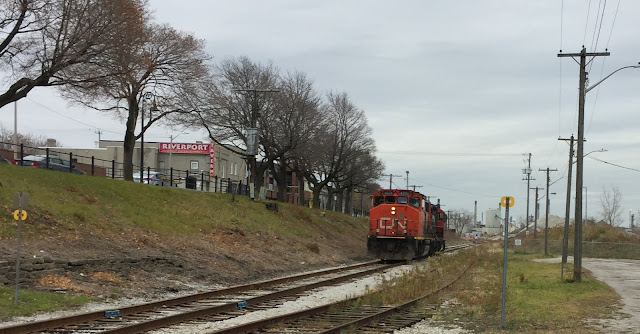 Thanks to my brother Marc for a quick tour of this fascinating little spur. I think these photos are another example of something I've been trying to do all year. These shots blend in with the train, placing it in context. The real story here isn't necessarily the train, but the somewhat unique surroundings for this rail line. A throwback for sure. Below is one more shot that I threw in since I thought it was a cool shot.  - Michael 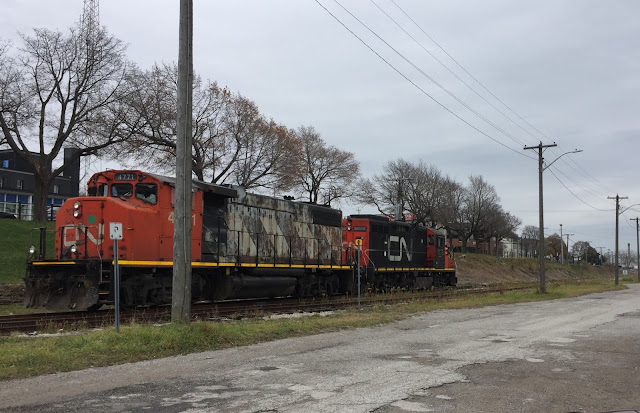 A very nice tour of a lightly used spur. You can see the haphazard ballasting and weeded siding.. interesting!

Thanks for the comments, gents. Steve - I dare say this spur is the best part of railfanning in Sarnia, since there are so many interesting views for a photographer. C.Flat - Man, good eye! I didn't notice that 4771 was previously assigned to Ottawa. Good catch. That unit sure does get around.

What day did your brother take the photos of that train? He said he was on his lunch, but didn't say what day it was.

It looks like a pretty cool spot to catch a train! The pictures tell a great story with lots of history behind them. With the big railroads focused on main line operations, there can't be too many places left like this!

And as someone else already commented, CN 4771 jumped out at me immediately as it was the power on CN 589 the one and only time I caught it on the Renfrew Sub, that was back in September 2015.

Thanks for the comments, gents. My brother told me he saw this consist on Nov. 28. That would explain the lack of snow and the hints of green still going strong. Ah, fall/winter in SW Ontario...