I think the theme of making lemonade from lemons might just be a recurring series on this blog. You might recall last year that I had to make the most of a dry spell by looking for new locations and new perspectives to make the most out of some slim railfanning choices up here in Ottawa. Last summer, I gave a lot of thought to some shots I wanted to get on the Smiths Falls Sub and I managed to get some interesting rail photos as a result.

This past weekend, I found myself in Smiths Falls and was looking forward to catching something interesting in the yard or on the main line. Unfortunately, I probably chose the worst possible time to visit the yard as it was largely empty and no freights seemed to be forthcoming, judging by the signals.

This is what I saw:

Deep in the yard, CP GP38-2 3089 and GP20C-ECO 2279 were idling, although they didn't move when I was there. Likely they were just keeping warm in the cold weather until they were needed.

Other than that, there were maybe 20-30 tank cars and a few cylindrical hoppers. EHH's CP is not terribly interesting, even with the man now gone and setting his sights on CSX. 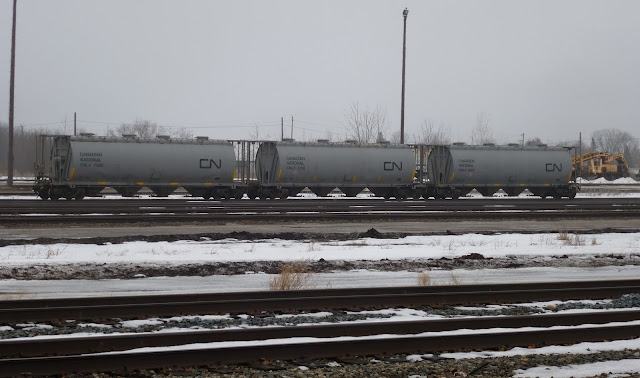 Nothing special in either shot, but the tank car shot gives you an idea of the curvature of the Smiths Falls yard, which offers some great opportunities for photographs, if only something in the yard is moving! 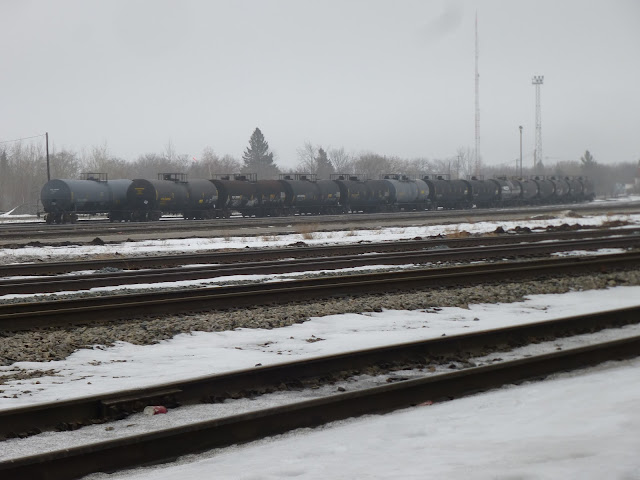 As I said, there wasn't much to look at or shoot while I waited for a train. There was an assortment of MoW equipment, but it was quite far off. 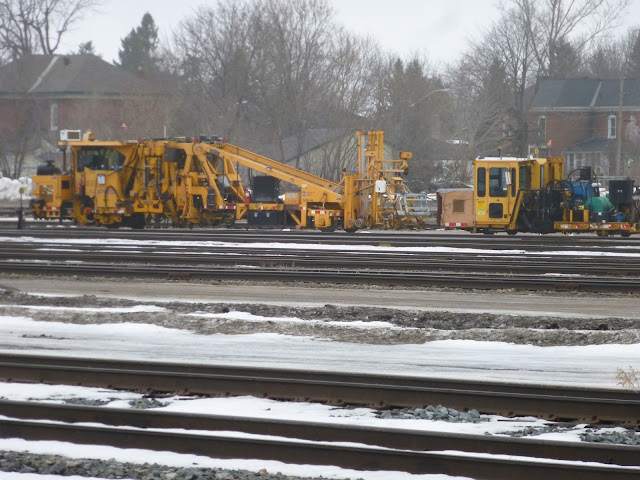 After I shot all the obvious items I could, I began to think about whether there were some obvious details I might be missing. It turned out, there was something staring me right in the face. Along the track closest to the old Smith Falls Via Rail station, some signaling equipment sat on the ground, begging to be included in a shot.

This was the result. 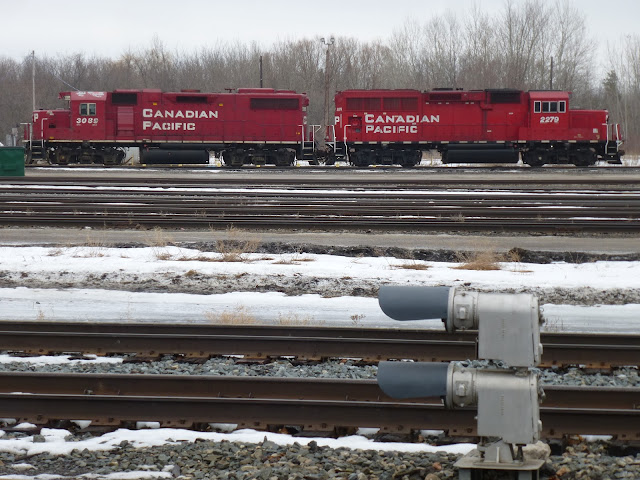 Compare that shot to the top shot. I was much happier with this shot. It gave me a more dynamic visual. It also got me thinking about the morning Via from Ottawa, which was due to make its way through the yard.

So I began to put some elements together in my mind. I could take advantage of the curvature of the track on either side of the yard and I wondered whether I could bring together the Via corridor train with the two geeps idling in the yard.

There were some challenges, the most obvious being that the geeps were quite far from where I was standing, but I had to try something because it appeared as though no freights were imminent.

I'll save the rest for next week.
Posted by Michael at Saturday, January 28, 2017

I've tried a couple of times to take pictures on CP between Smiths Falls and Winchester, but each time I've been skunked. The yard at Smiths Falls does have the scheduled VIA going through it to help break up the dry spells.

I agree that including the dwarf signal in the loco shot adds a lot of interest.

Thanks for the comments gents. I was disappointed with the lack of items to shoot on the weekend, but I was happy with the solutions I came up with. Stay tuned for my latest experiment next week.

Seems it was largely Brockville cars in the yard that particular day.

Liking the lemonade stand, Michael. Here's a different Smiths Falls view, from aboard VIA.
http://3.bp.blogspot.com/-mGybC6Mk7C4/TmTg9Ge4R0I/AAAAAAAAEHU/w868Uu-KiPY/s1600/blogottawa12.jpg
Sorry about the cut & paste.
Eric

Thanks for the comments, gents. And thanks for the idea for a title for this series, Eric. It shall henceforth be known as the Lemonade Stand. Good call!

Good day to you and thank goodness for your passion for Ottawa's old rail lines. My name is Steve, my question for you pertains to the Carleton Junction. I know that the Bells Junction goes back to 1966, but what of the Fallowfield station? Do you know when it was running? Or, which was the closest stop way back in the day (early 1900's) to Fallowfield or Twin Elm?

Steve, from what I know the closest historic stations on the Smith falls sub would have been Merivale Station at the Marivale road crossing in Nepean, and towards Smith Falls the closest station would have been in Richmond, near where Ottawa Street crosses the railroad

Steve - I will defer to Ian on this one. I know Fallowfield Station opened for business in the early 2000s. I don't have the year handy at the moment.