Hide and Seek, Part I

When you don't see all that many trains, you have to make the most of the chances you do get. I have mentioned this many times on this blog. Aside from the very sporadic CN freight trains in Ottawa's west end, I am 40 minutes away from the nearest main line. That's why I always make sure to bring a camera along when my family travels to Southwestern Ontario. There are a number of spots along our route where you can technically get a quick shot, if you are ready. Last summer, my family made two trips to Southwestern Ontario.

There wasn't much on the first trip down. Usually, if we are passing through Kingston around 9:30 a.m., we will catch an eastbound or westbound CN mixed freight. On our first trip, there was nothing. Between Kingston and the Greater Toronto Area, there are a few spots where you can see rails, but nothing was happening.

On the east side of Toronto, we did see a CN freight parked on the mainline, waiting for clearance to proceed west. We were in the westbound lanes, so visibility was tight, to say the least. I was sitting in the passenger seat and attempted a few shots at the head end of the train as it waited.

This time, there were no cars in the way, but I did managed to snag a decent shot of the head end power, although it was partially obscured by the highway divider. As I've mentioned before, I earn many of these shots through quick timing and lots of editing. The full frame of this shot was not nearly as orderly as this cropped version. But, all in all, not a total waste.

I titled this post Hide and Seek for a reason. When attempting shots from the highway in a moving car, anything on the tracks can disappear behind a car, tree, safety barrier, building or bridge in an instant. It's not an easy game to play, especially when you're shooting across your car and trying not distract the driver. Thankfully, my wife knows this game and is ice cold behind the wheel.

A few weeks after this first trip, my family headed west again on a separate trip to visit the other side of our family. The second time around, my highway railway karma was much better. We did run across a freight train headed east on the CN Kingston Subdivision, but the trees obscuring the main line foiled any attempt at a shot of the head end. This time, my wife was in the passenger seat and trying her hand at railfanning.

She did snag a tiny piece of the mid-train DPU. This shot is the essence of hide and seek. 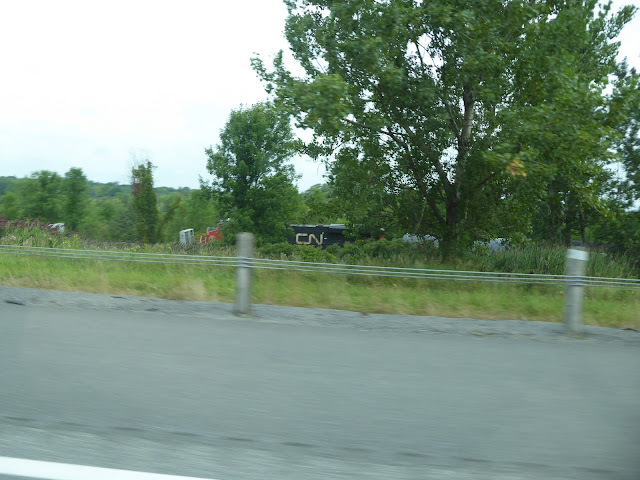 I did pick out a few shots of the middle of the train, since there wasn't much else to focus on. I like the single TTX RailBox car in the middle of a string of tank cars. When I was younger, I loved watching the old freight trains that didn't seem to have any order to their consists. I know there is an order to this train, but it's always fun to see a car that sticks out in a line. 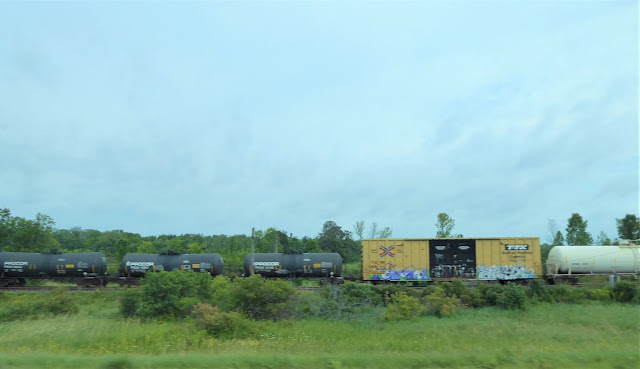 Here's one more shot. Boxcars and a lumber car. Nothing special, but some contrasting colours and schemes. It's all part of the game when you're on the highway.

Further along on our journey, we came across something really interesting as we left the 401 and merged onto the Highway 8 in Kitchener. Having lived in this city and thinking back to past experiences in the area, I knew there was a slight chance of catching something. I did in fact get something at long range, but I am saving those shots for the next post in the Hide and Seek series.

Our final stop was Stratford, which meant some interesting shots in the town's CN rail yard, which is shared with the Goderich Exeter Railway. There were a few posts worth of material from my time in Stratford that I just shared.

Skipping ahead to the return trip to Ottawa, I did manage to get a few shots in the east end of Toronto from the eastbound lanes, which are much closer to the GO/CN tracks. Here's one shot that you can easily get when you exit off the eastbound 407/412 ETR back onto the 401. It puts you right next to GO's east end maintenance facility and yard. I like that you can get a shot along the curve. 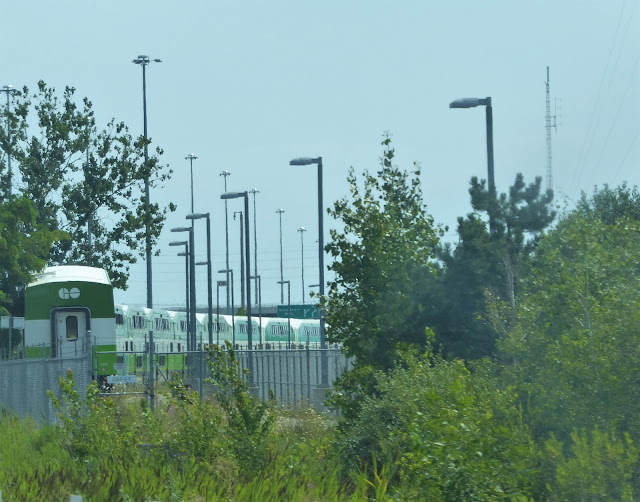 I wasn't able to get a shot of the GO rail yard that was usable for this post. The glare of the sun off the car's windows obscured my shots. You can't win them all.

All in all, I think my train karma was pretty good. I also managed to see a CP container train passing beneath Highway 416 near Kemptville, but there were no shots of that meet.

As always with these posts, I am a bit hesitant to share these shots, as there are not typical of what you would find on a railway blog and they are certainly not up to the usual standards of many other blogs with far better photo quality.

I guess there are two reasons why I share these shots. One, I think the challenge of rail photography from the passenger seat of a car on the 401 is incredibly difficult, which is itself worth exploring. Second, trips on the 401 are always an opportunity for bonus rail photos. For someone living in a railway desert, I can't pass up the chance.

The struggle is real, Michael! It is Not Easy.

I won't ever show my view of the Rideau Canal under our VIA train at Kingston Mills. Because I got mostly bridge!

Yep, but it's a noble fight for us train-starved Ottawans!