I’m tired. Tired from renovating my basement after a flood and tired of rehabilitating my property after we had a new pipe connected to our house, which destroyed our front yard and landscaping. So yeah, I’m tired from that. I’m also tired of this wet spring and cool temperatures. This spring has not been great and much of my time has been spent as a cut-rate Mike Holmes wannabe.

So the blog has suffered a bit. I was thinking of new things to talk about and there is no shortage of newsworthy items from Ottawa. Our new LRT is still not ready and doesn’t appear to be, even though it is more than a year behind schedule. Did I mention that one of the new electric trainsets derailed just outside of Belfast Yard recently? Okay, maybe this topic is not your cup of tea. How about the uncertainty over CN’s desire to pull out of Ottawa? How about CN’s recent (and vague) advertisements alluding to some sort of celebration they are organizing for Ottawa next year? I’m wondering if they’re even going to be here still.

I am not going to write about any of this. I’m bored with reality, tired of light rail and full up with day-to-day headaches. I want to think back to when I was young and just liked watching trains go by; a time when I simply admired them for the mechanical marvels that they are.

With that in mind, here are a few small anecdotes and observations from the railway of my youth, CSX’s Sarnia Subdivision. In many ways, this rail line is an anomaly that you don’t often find anymore. I was looking through some photographs of this line the other day when I noticed some interesting things that I hadn’t seen before. 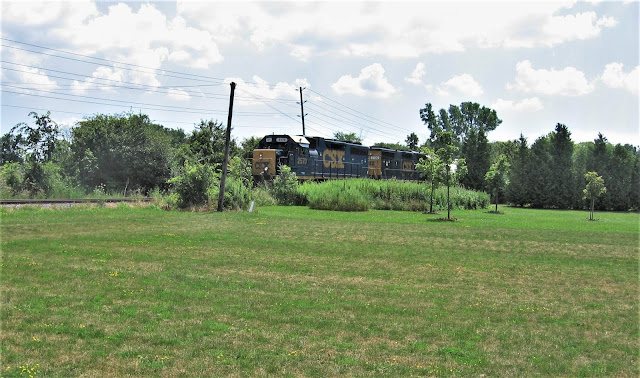 1. In this shot, can you see the old telegraph pole? I never noticed it before and with good reason. They are pretty small, compared to the old poles I’ve noticed along other rights-of-way. Just a single pole and two measly wires leaning away from the roadbed.

As readers of this blog know, this line is actually quite old. It has changed hands a number of times and reads like a who’s who of CSX predecessors. It was the Erie and Huron Railway when it opened for business in 1886. It changed hands once and was renamed before becoming part of the Pere Marquette Railway in 1902. From there, it became part of the Chesapeake and Ohio in 1947, and then the inevitable mergers brought in the Chessie System group of companies before finally becoming CSX Transportation.

Unlike many other railways, this line shed its passenger service in 1933, much earlier than other lines. It’s a shame that none of the passenger stations have survived, other than the old Mooretown Station, which is located on the grounds of the Moore Museum.

But that little telegraph pole, barely noticeable as it is at the back of my sister’s property, which extends to the tracks, is a witness to the history of this line and its importance in connecting a very large and scattered group of settlements in Lambton County. 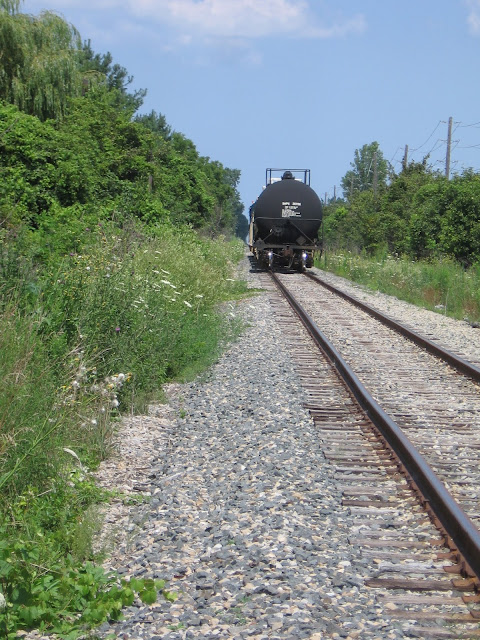 2. This is something I’ve noticed before but it was particularly noticeable behind my sister’s house. Usually, a railway’s roadbed is elevated a fair bit above the surrounding landscape for many reasons, not the least of which is to prevent washouts from floods. In many areas along this line, the roadbed is actually not elevated all that much higher than the surrounding area. I really noticed it in these images. It made me wonder if this was a factor of neglect in that the railway has not bothered to bolster its ballast in a while or if it was a factor of the line’s design. Did the elevation in this area suggest to the line's builders that it did not require that much of an elevation? I wonder. 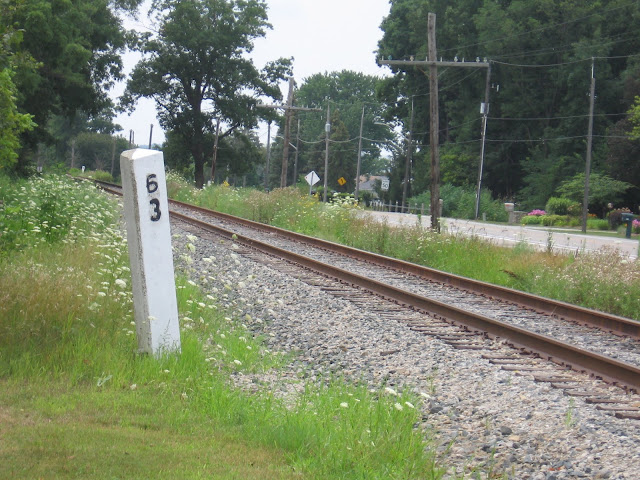 3. I’ve shared this shot before, but I like the fact that this line still has concrete mileposts, like this one near Emily Street in Mooretown. I’m not sure how many are actually left but I like the fact that some of them are still around. I recall as a kid seeing concrete W signs as well, but as you can tell from this shot below, some of them have been replaced over the years. 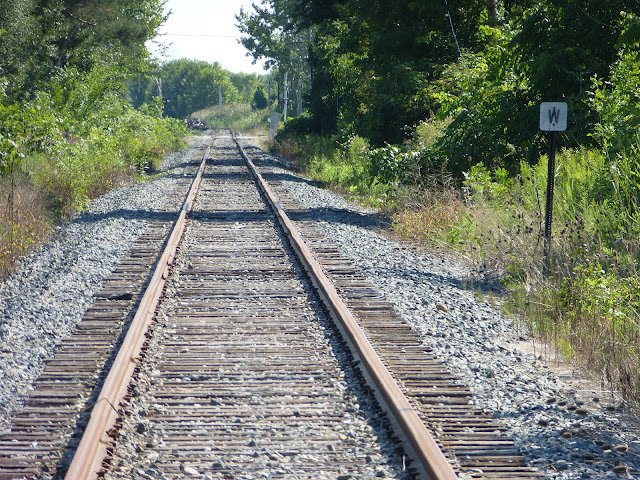 4. I didn’t realize this until I was older, but this rail line has no speed or occupancy signals, and for good reason. The line, even in its heyday, connected with CN in Sarnia and CP in Chatham. The trackage through Chatham-Kent is now finished, of course, and the Sarnia connection is used only for once-a-day interchanges between CSX and CN at CN’s Sarnia Yard. CSX also connects with CN’s St. Clair River Industrial Spur at Terra Industries, south of Courtright, but this connection seems to be lightly used or unused at the moment. The point is, neither of these current connections require signals. The Chatham connection did have signals but I think that was it for this line. Up until the 1950s, the line also connected with the former Canada Southern St. Clair Branch in Courtright, but I have not seen any images of whether it was governed by any signals. A real throwback. I imagine the line was (and still is?) governed by OCS. 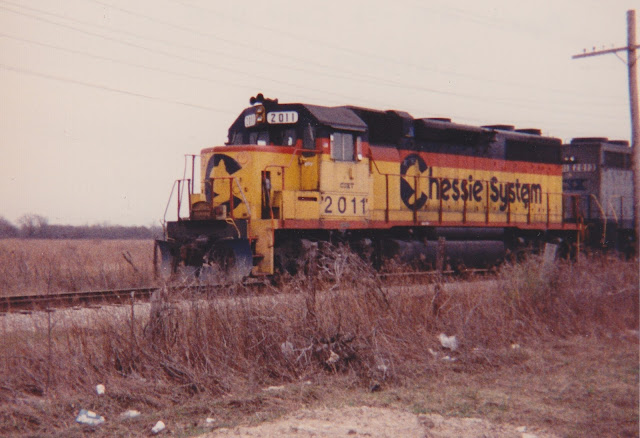 5. One more way this line was really different. I remember watching a competitive baseball tournament one summer when I was young and then hearing the rumbling of a GP38 (like this one pictured) on the adjacent rail line (this line in my day was the exclusive domain of this geep). Well, didn’t the engineer stop the engine next to the ball field so he could watch some of the action? How many rail lines have this type of casual attitude these days? It reminds me that numerous blog readers have told me that they see CN 589 stop at the March Road railway crossing in Kanata so the crew can pick up a Tim Hortons coffee on their way to Arnprior.

You know, I feel better now. It’s been a tough couple of weeks of hard work for me. And my commute to work has been changed by bridge closures, due to flooding. So, not a lot to cheer about, but I have plans to have a trackside day in the coming weeks. This was the same trackside day I planned a year ago. So, things are looking up.

What about you, fair reader? Where is your railway happy place? Or where was it?
Posted by Michael at Friday, May 17, 2019
Email ThisBlogThis!Share to TwitterShare to FacebookShare to Pinterest
Labels: Chesapeake and Ohio, Chessie System, CN, CSX, GP38-2, Lambton County, Pere Marquette, railfanning, railways, Sarnia, Sarnia Subdivision

Hope spring arrives one of these days!
Eric

Oh, it's fine, Eric. Not to worry. The point of the intro was to express that I'm tired of being an adult and would just like to railfan along the Sarnia Sub of my youth! I'll settle for an afternoon in Smiths Falls or Bedell.

LOL. I think I can relate to being tired of being and adult too!

If I had to pick a railfanning happy place, it would be then end of Brian Avenue in Scarborough, where I would watch freights rumble by with my younger brother and my mom's dad or any one of the level crossings in Milton, where we would regularly wait for CN or CP freights, as well as the Go-Train. It was fun waving at the caboose, and we often got a wave back.

To be a kid again!

Hi Mike, my railroad happy place is gone now. It was the Beachburg Sub. It used to go by the church I used to go to in Woodlawn and by the village of Fitzroy Harbour where I used to live. My favourite boating place is the Iroquois Lock on the Seaway. You and your family should check it out sometime. It is possible to know in advance when the boats are going through. Perhaps you could do an article Mike on how the VIA trains turns around in Sarnia. I have witnessed it myself. It helps to have a scanner I will admit.

Thanks guys for the comments. I can relate to both places. My favourite spot as a kid was the St. Clair Boulevard crossing close to my parents' house in Corunna. It was on what was then the edge of my hometown. It was a quiet spot where you could hear the train coming for quite some time.

I've never seen the Via turn in Sarnia. That would be fun to watch!