Lies, half truths and flat out numbskullery

I was waiting for my bus recently when a full consist O-Train trundled by on the Confederation Line. It was interesting to see the reaction of my fellow commuters. A few people turned around briefly while most seemed to ignore the train, which was a combination of two trainsets. Apparently, this will be the configuration used frequently. But, given this LRT system is already a year behind schedule, people are growing tired of being reminded that they should be excited by this tiny first phase of the city's new light rail line.

This was a shot of the train pulling out of Pimisi Station on the Lebreton Flats, just west of Ottawa's downtown core. Pimisi, for those wondering, is an Algonquin word for the eels that can be found in the Ottawa River.

The site of the O-Train got me to thinking of the lies, half truths and misinformed messages I've heard since the city decided to plow ahead with its electric light-rail dreams. Here's a brief list of things that have really bothered me about this project.

1. Phase I will benefit all commuters - The way the city is hyping light rail, you'd think there would actually be some sort of benefit to commuters. The truth is, unless you are within walking distance of the stations along this route, the first phase of this light rail service will not benefit you. I live in the suburbs. For me, this new line means my morning commute now involves two transfers. Right now, I need to transfer between my express route to a shuttle route across the river so I can get to work in Hull (those brown buildings you see in the picture). Adding another connection will only take away time from my day that could be spent elsewhere. The city's ad campaign really makes no attempt to be honest about this point. All riders west and east of the end points of this line will need to make a transfer. That adds time. There's no way around it.

2. Our way or the highway - Since the beginning of the rail renaissance in Ottawa, the city has been very clear that there is no other way to design a commuter transit system that is not the city's way. Ottawa has not pursued a option that multiple political candidates have put forward of using existing railways for commuter purposes, like they do in Toronto... 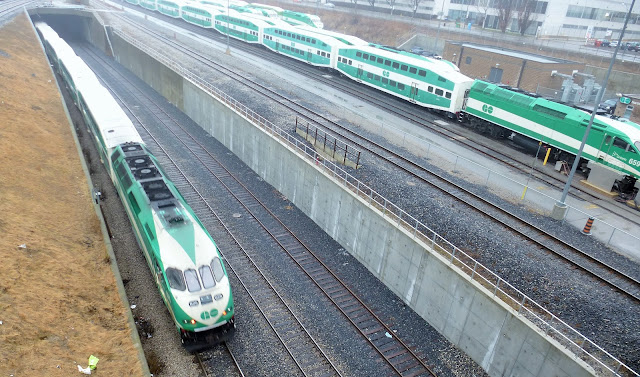 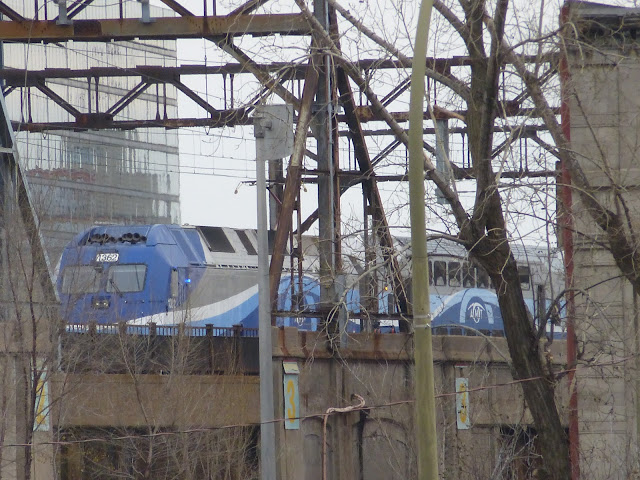 You might think this is a safe statement to make, since Ottawa is nowhere near as big as Greater Montreal and the GTA. But, here's something you might not know. Geographically, Ottawa spans 2,778 square kilometres. That makes it the biggest of Canada's big cities, in terms of area. (There are seven cities that are geographically bigger than Ottawa, but they are nowhere near as big as Ottawa in terms of population. Their land mass and city status are a byproduct of municipal amalgamations that created a city where there isn't always a population to truly back up the claim).

Think of the other very real opportunities Ottawa has passed on since 2009.

1. Commuter rail on Beachburg Sub into North Kanata and even to Fitzroy Harbour
2. Commuter link over the Prince of Wales Bridge, which may yet happen, thanks to Gatineau's own light rail plans (remember that this bridge was weeks away from being converted into a recreational pathway)
3. Extension of the existing O-Train to the Ottawa Airport and into Riverside South (Yes, I know that this extension is a go, but how long did it take and how many times was this plan presented and rejected?)

3. The O-Train will save the environment. Honestly, this argument that light rail is good for the environment is naïve to say the least. Long term, a LRT system should be good for the environment, but it depends on whether you are successful in getting people out of their cars. Right now, I can't honestly say that the train, even when it does reach closer to my neighbourhood, would convince me to change my habits. The sad truth is, in many North American cities, the most successful public transit systems owe much of their success to the fact that they are the easiest form of transportation to get downtown. As long as getting downtown by car is easy, people will not make the switch. I would never drive downtown for work, but I wouldn't take the train downtown on the weekend, either. To me, there's no net gain here for the city. And the interesting thing in Ottawa's case is that the biggest factor in reducing the city's CO2 emissions came from the province. Ontario's decision to shut down its coal plants did more for the environment than any local initiative.

Call me a disgruntled, skeptical commuter, if you must. But I'm not alone.

Aside from the City of Gatineau's LRT plan, the City of Ottawa recently (back in February) announced that extending the Trillium Line into Gatineau across the Prince of Wales bridge would be part of "Stage 3" of their LRT plan, which is also supposed to include extensions to Kanata and Barrhaven.