The top photo is a bit of a tease, even though it's not much at first glace. This is my initial shot when I caught up with CN's Arnpror Local, otherwise known as 589, recently. I call your attention to the lone tank car in tow. Do you see the yellow badge on it? I was surprised when I grabbed a few shots of the unique tank car, which I had never seen before. Seeing this tank car reminded me that I have amassed a collection of rolling stock photos over the last few years. This week, I decided to share a few photos of the standout shots I have spied trackside along with a number of shots my brother took trackside in Sarnia. I will share better photos of the tank car in the photo below soon. 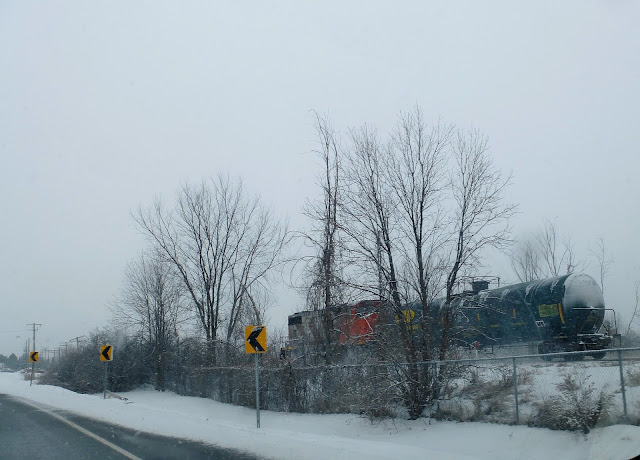 The first image is a beautiful shot my brother grabbed of an old Boston & Maine covered hopper, which was repatched for ATEL Leasing Corp. As common as it is to see generic railcars with marks belonging to leasing companies, it's always interesting to see the old markings of a fallen flag remain on a car. In this case, the car looks very much like it did when it plied the rails of the Boston & Maine, which became part of Pan-Am Railways Guildford Rail System (later Pan Am Railways) in 1983. 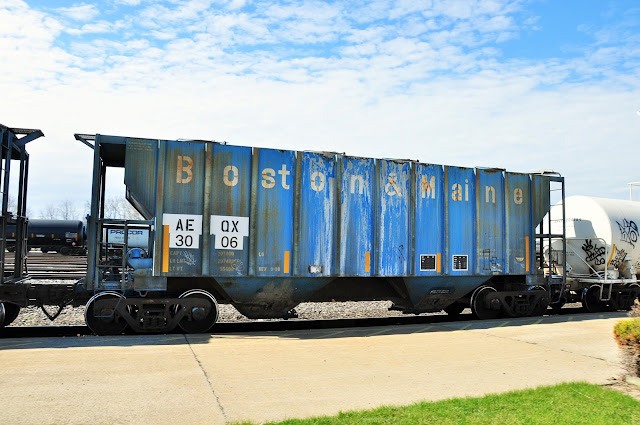 Here's another from my brother in Sarnia Yard. This hopper is one of many CSX predecessor cars still bearing the markings of its former railway. I am fascinated by CSX's history, since it includes such colourful railways including the Baltimore & Ohio, Chesapeake & Ohio, Seaboard Coast Line, Louisville & Nashville, Western Maryland and many others. In this case, Seaboard System was the combination of the component railways that made up the Family Lines System. Since it was such a short-lived railway, I find any of its relics to be great finds. 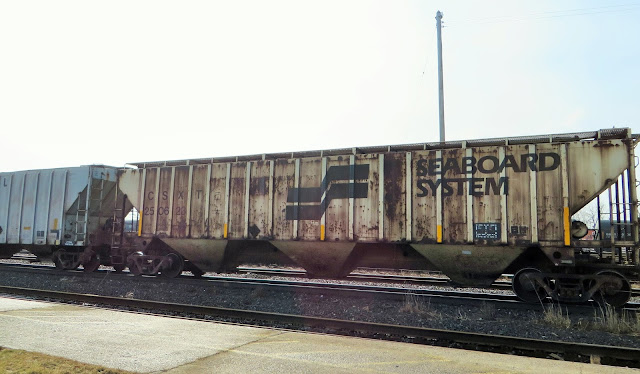 Here's another shot from my brother in Sarnia Yard. These boxcars, which are patched for a leasing company, still carry faint markings for the Maine Central railway, another of my favourite fallen flags. These cars don't have the prominent original markings like the two cars photographed above, but they are still great reminders of railroading's past.

This shot, below, was taken when I caught up with a Canadian Pacific freight train in Bedell, Ontario, in July 2014. Like most railfans today, double stacks don't really excite me much, but there was something about the symmetry of the Canadian Tire containers that I liked, so I snapped a few shots. I like this image for some reason, but I'm not sure why. 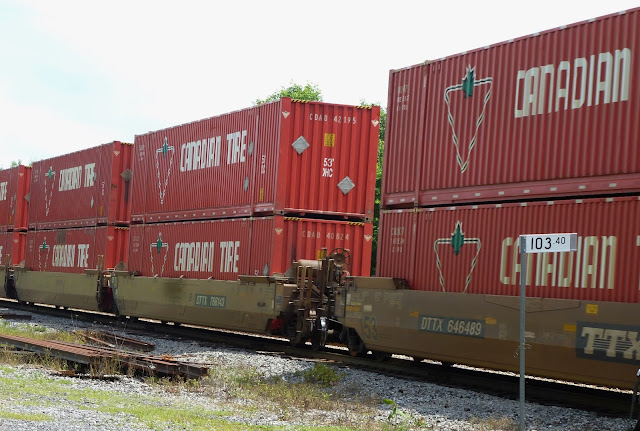 This car I found in Walkley Yard in August 2013. It was perched on a spur near the Rideau Bulk facility. So, what's the big deal with this car? Well, it's incredibly rare to see a coal/aggregate car in Ottawa for starters. Even though the city has a number of stone quarries  on Moodie Drive near the Smiths Falls Subdivision, none has rail service. I sometimes see a modified orange CN hopper in the local yard, but this was the only time I saw this UP car. I'm not sure what it was doing in the yard, but I'm glad I caught it. 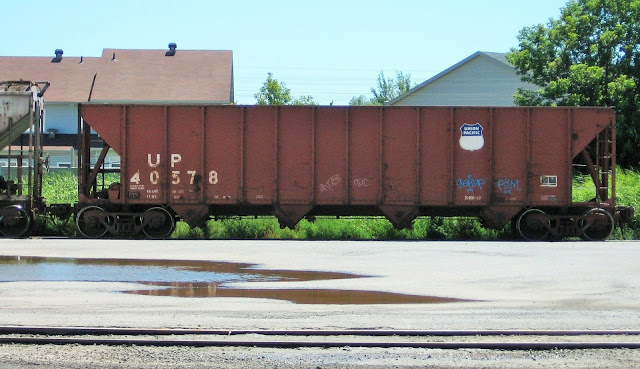 This tank car below is very much like any other Procor tank car. These cars are everywhere throughout the North American rail network, but what I found interesting was the little logo next to the Procor logo. I figured it had something to do with what the tank car holds. I checked the hazardous materials placard and found that this car holds sulfuric acid. I don't see many of these cars up here, so I thought I would add in this seemingly mundane shot. 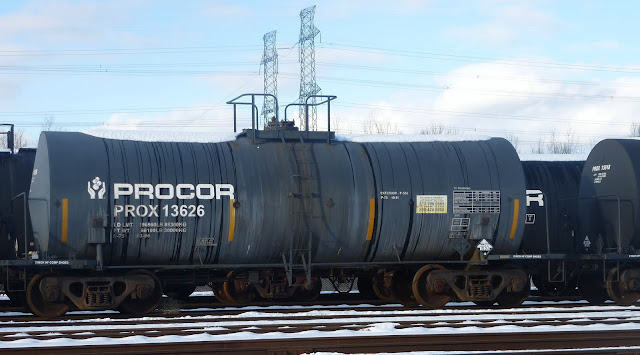 This shot, taken August 2013, shows a Wisconsin Central boxcar resting on the same spur at the Rideau Bulk facility. There are always a few boxcars at this facility, which makes any visits to Walkley Yard worthwhile for railfans. These cars have been tagged repeatedly and repatched. I took the shot because I have not seen many WC cars up here. 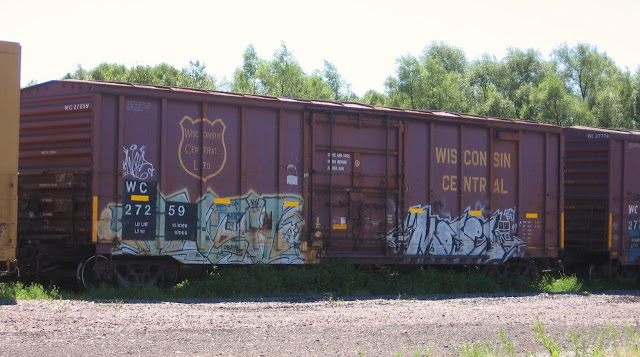 This shot, taken, March 2013, is probably a fairly common site elsewhere but I've only seen these hoppers in Ottawa a few times. The car belongs to American Railcar Industries and is your basic four bay covered hopper. I've seen this paint scheme on these cars before but am not sure who the previous owner was. It was a nice splash of colour on a day when the rail yard was full of tank cars. 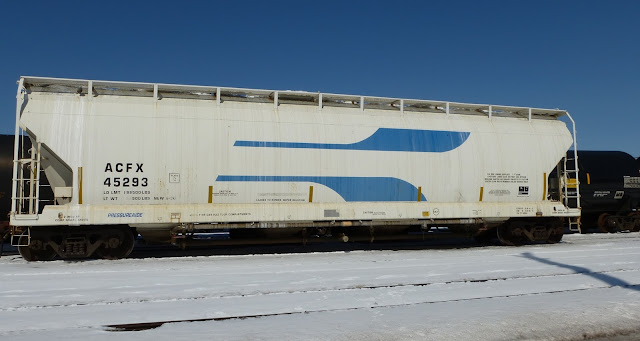 I was particularly pleased with this image, taken August 2014 in Goderich. Sadly, I've yet to see any live action in Goderich in my visits to the town, but this string of hoppers in the Goderich yard was a nice consolation. I used this image in a previous post about Goderich but I figured it was worth another look. I call this shot the manmade rainbow. The position of the sun and the composition of the sky made this a near perfect shot for me. 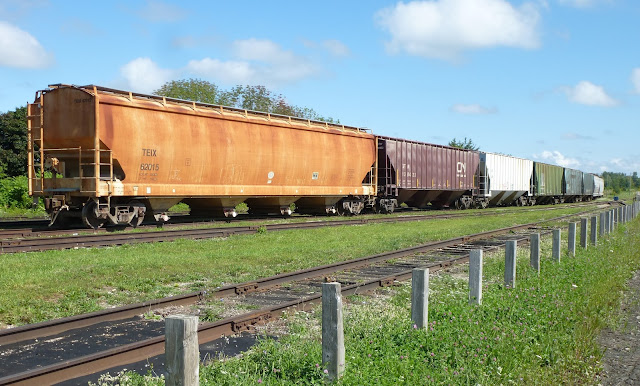 This last shot I included for two reasons. One is this car is patched for Cabot Carbon, a Chemical Valley company that once had a full fleet of its own black hopper cars that CN spotted and hauled away. Those cars even had the Cabot logo on the side. So, this car brought back memories for me. The second reason I chose this shot is because this car is so odd looking. The car doesn't have the Cabot logo and seems to be a hybrid between two cars (in appearance anyway). It's not quite a box car, but has the dimensions of a boxcar. It's not quite a hopper car in appearance although it clearly has the trappings of a hopper car. This car was spotted by itself in Sarnia Yard one cold morning a few years ago. 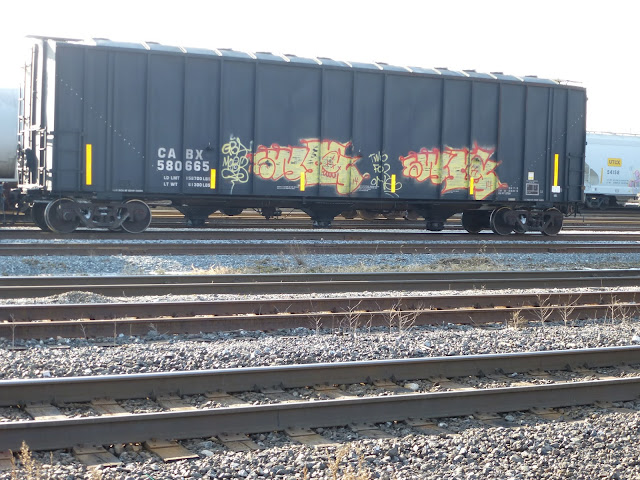 This final shot was taken in Markham through a hole in a fence trackside. Again, there isn't anything that stands out in this shot, but I liked it because of the diversity of the containers. You can see the Hapag-Lloyd, JB Hunt and CN trailers, but also the Stolt tanks. It's a fairly representative shot of modern railroading. 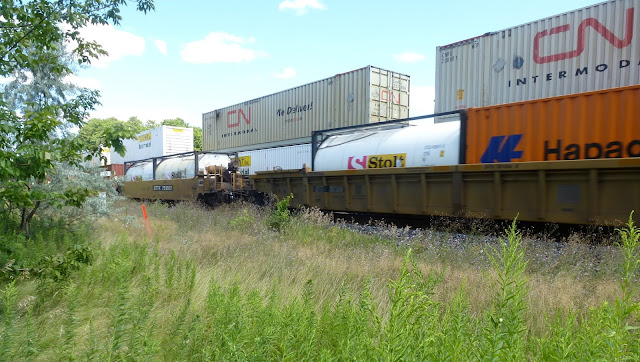 So that is my brief recap of some of the best rolling stock shots I have amassed in the last few years. Hopefully, it at least illustrates that it's not just the head end of a train that is worth a look.
﻿
﻿
﻿
﻿
Posted by Michael at Thursday, February 25, 2016

The composition of those hoppers and the fence line is just perfect! So nice.

I like the Seaboard System cars, and really, any fallen flag is pretty good to spot. I should do a post too :)

The Boston & Maine was quite a simple yet bold scheme. Just to nitpick, Guilford acquired the B&M, I believe, and eventually Guilford became Pan Am.

Thanks for the comments Steve. You are right that it was Guilford. I made that change. It would be fun to see your collection of interesting rolling stock or fallen flags in the future.

This is the Year of Photographing the Blisteringly Mundane on Trackside Treasure, and now on the Beachburg Sub. Mundane is often associated with boring, but this is simply not true. If we bypass photographing the mundane, we'll look back years later on nothing...rolling-stock wise at least.

The Procor car has the CAER Canadian Chemical Producers logo - a safety awareness and response initiative.

The ex-B&M car is likely in roofing granule service out of CN Belleville of CP Havelock heading for the US. The first time I observed these cars in Belleville yard I was like, whoa and they were like, well, as your photo shows. Throwback Everyday!

The carbon black car is what I call an airslide, since the particles are so small they have to be removed carefully or everything turns black!

When it comes to the Family Lines and MEC cars, well, I remember them when they were pristine, so can't comment there without implicating myself chronologically!

Seriously, great collection and thanks for honouring the unsung heroes of every train - the cars!

Thanks for your comments, Eric. I was inspired by two things -- one was your post about tank cars and another was the fact that I had a backlog of shots from my brother that I was looking to share in some sort of thematic post. I aim to try capturing more mundane shots this year.

ACFX car looks like the Englehart hoppers that deliver clay/silica to where I work. Same blue swooshes on the sides.