Last spring, my brother  Marc was driving near Watford, Ontario, east of Sarnia, along the CN Strathroy Subdivision. He spotted a CN freight train headed west toward Sarnia and decided to get some shots of the freight. Marc ventured down a picturesque side road, Underpass Road, to get some shots. He ended up capturing some great shots of this train. His first shot captured CN SD70M-2 8914 and ex-BC Rail C44-9WL 4644 emerging from the brush alongside the right-of-way as it heads over Underpass Road. 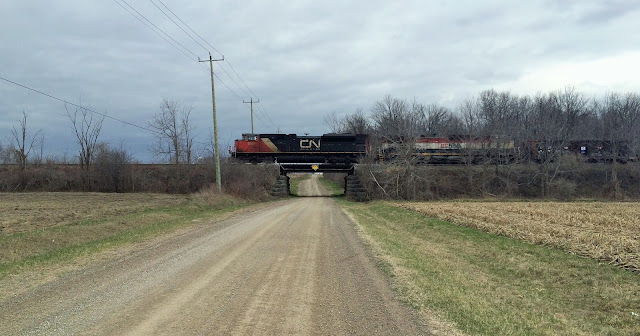 Here's a clearer shot of the locomotives. You can see from the trailing cars that the units are pulling a mixed freight, my favourite type of train.

This shot shows a great profile of the train, with a tank car, a few steel coil cars, a large gondola and two hoppers.

My brother headed up the road and got a close up of this tank car and box car. The real bonus in this photo, though, is the view through the underpass. You can literally see for a country mile beyond the tracks. In the distance, you can see the silo. As I have mentioned before, Lambton County is very much like the prairies, only with more trees. This shot illustrates that effectively. 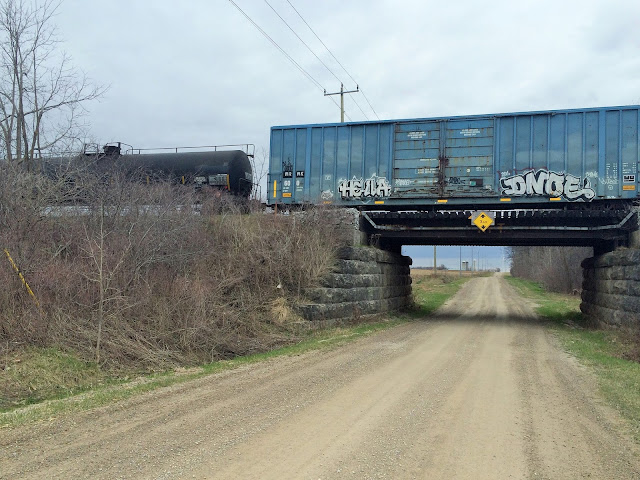 Also last year, my brother was doing one of his regular tours of the train yard with his son when he spotted another BC Rail unit, Dash-8 40CM 4619 tied up with a few CN units. You can also see a few other CN units a few tracks over. 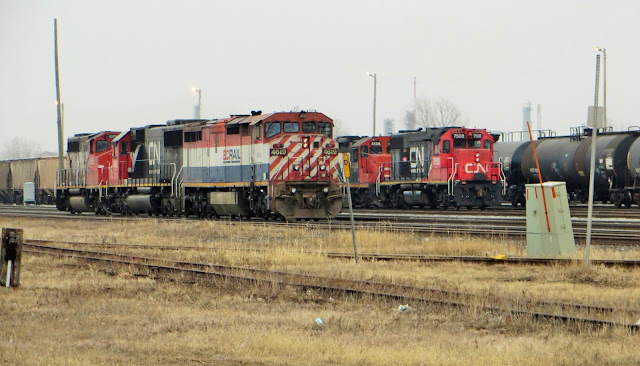 Finally, in late January, my brother caught an eastbound train emerging from the Paul Tellier tunnel. Full credit for framing the three units coming through the gantry. Well done, Marc. 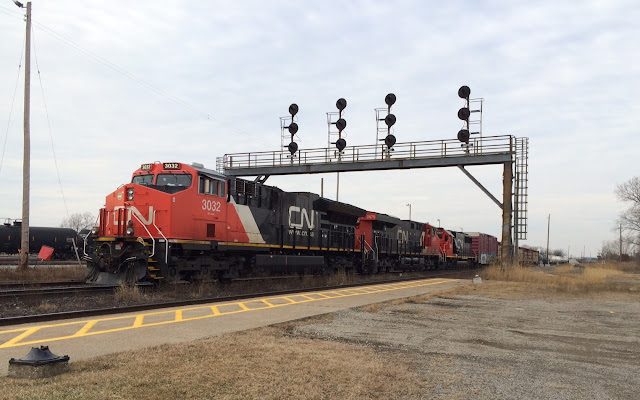 That last shot illustrates just how different winter can be in different parts of Ontario, let alone Canada. While Sarnia enjoys many a winter day without snow, Ottawa is buried in 50+ centimetres of snow. I should mention we received 51.2 cm in a single day earlier this week. A record for the capital and we didn't even need to close the schools. ﻿
Posted by Michael at Thursday, February 18, 2016

Thanks to your bro' and thanks for sharing these photos.

Thanks for your comment, Eric. I have seen a fair number of gondolas and hoppers carrying scrap on this subdivision, so it wouldn't surprise me if this train was carrying some.

Just thought I would point out that BCOL 4644 most definitely still is a BC Rail unit carrying BC Rail reporting marks.