Spring has finally, uh, sprung, in Ottawa for the most part. Some lilies and crocuses are beginning to poke out of the thawing ground. The last traces of snow are just about gone, although some of the last remnants of large snow banks are still visible.

For train enthusiasts like me, spring is always fun because it means we can pursue our passion without any fear of frostbite. I stopped by the central Via station to see if there was anything interesting to see. This photo pretty much sums up this spring in Ottawa. Do you notice the last remnants of winter in the photo below? If not, look at the Ottawa sign. 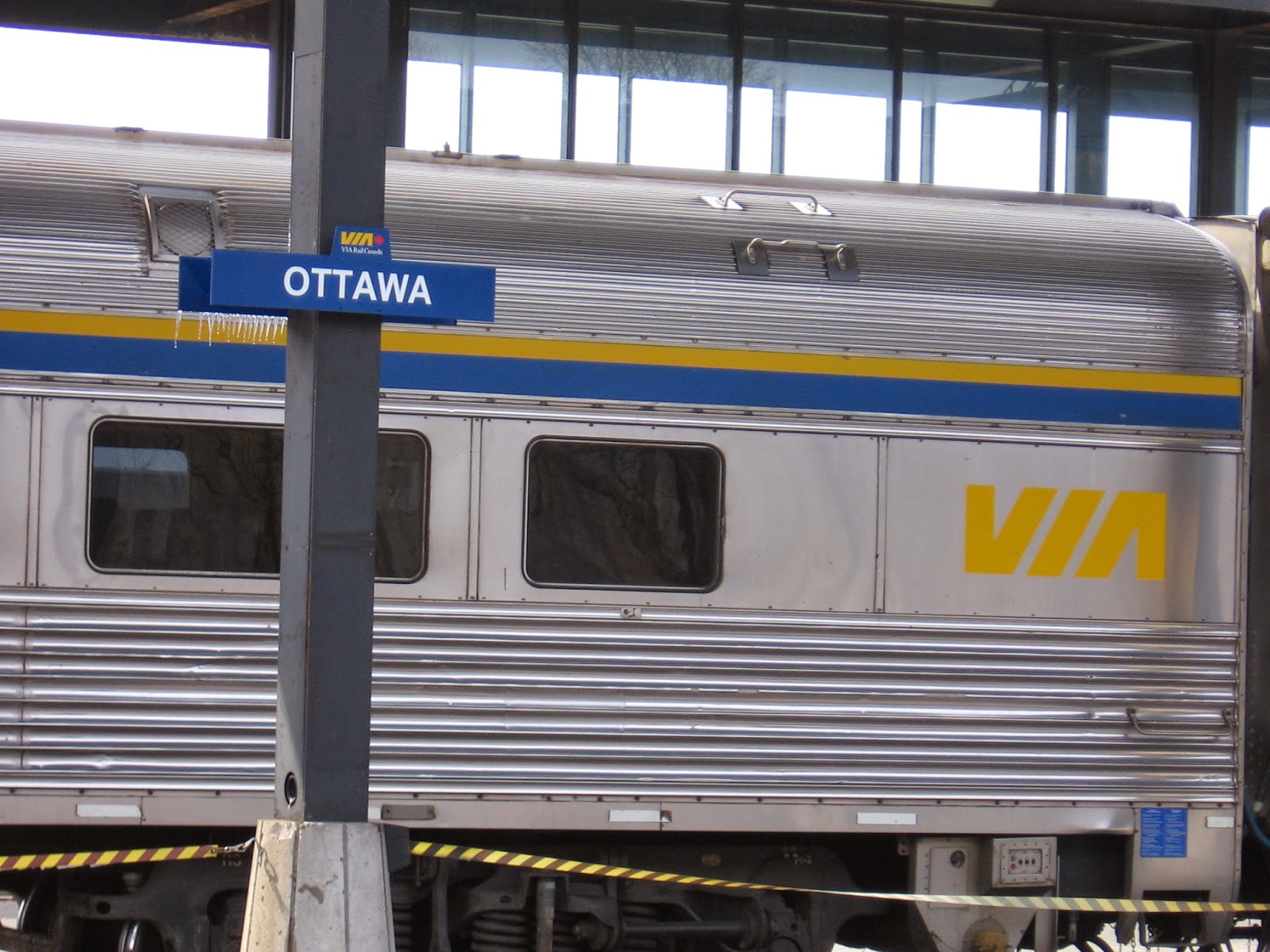 This streamliner was part of a string that sat idle, awaiting its next journey to Montreal. This is the time of year to catch the silver and blue in the Windsor-Quebec City corridor, before many of these coaches get assigned to the Canadian or other long-haul routes.

I ventured over to the Belfast Road overpass, just east of the station, knowing that a train from Montreal was due to arrive in a few minutes. As mentioned before, this overpass is a great place to shoot Via trains in Ottawa, perhaps the best spot in the city. 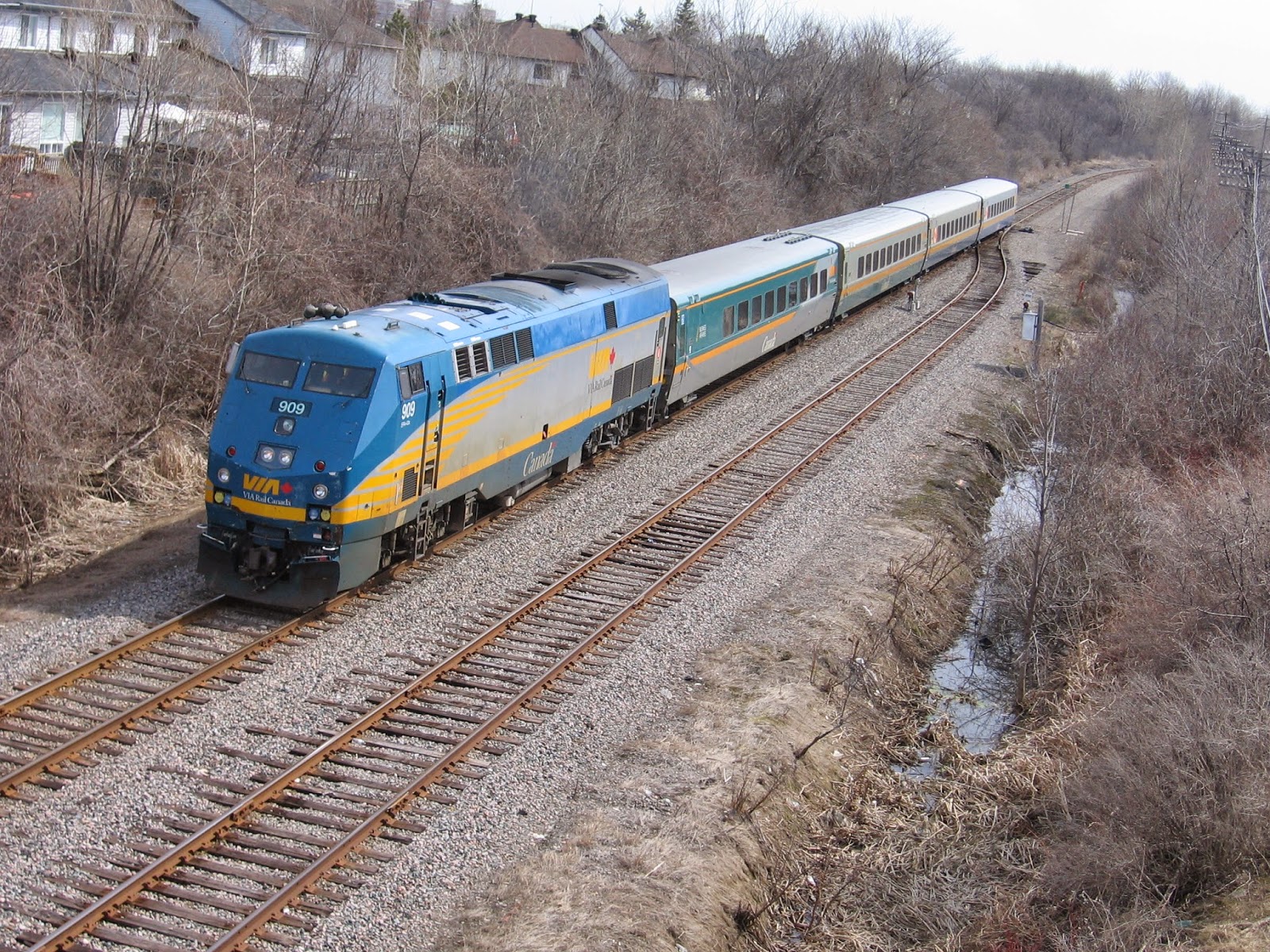 This is Train 33, headed by P42 909, heading beneath the Belfast Road overpass. I swear, this looks better in the summer. Just for fun, look at a similar shot from this January, taken from the same overpass (below). 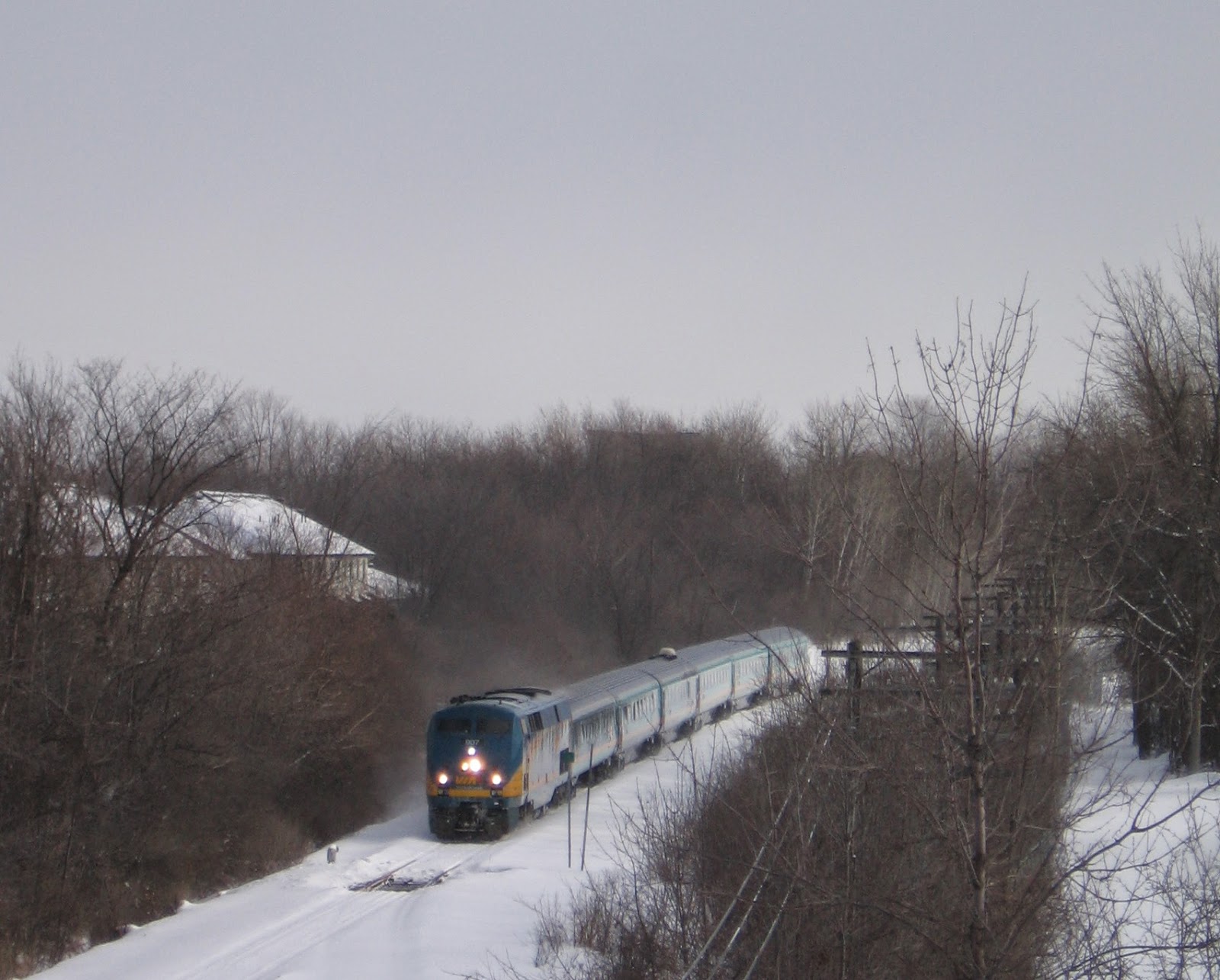 You'll notice that the switch heater is visible but the track diverging from the main line is covered over with snow. This shot, taken Jan. 27, was grabbed from the west sidewalk of the overpass while the spring shot was taken from the east sidewalk, which is covered with snow in the winter.

I mention this overpass because, by mid-May, it will be off limits, due to work being done on Ottawa's light rail line. A great deal of brush has already been cleared from the berms on either side of the overpass. This means I will have to find another spot to shoot these corridor trains this summer. This is a relatively minor problem caused by the LRT, as you can see from this story.

Here's a photo the city posted in the fall of the underground tunnel, where the light rail system will cross below Ottawa's downtown core. Right across from my building, a giant yellow transfer crane has been set up atop a massive hole that leads to the light rail tunnel. It's become a spot for materials to be delivered into the tunnel. But I digress. Let's get back to the Via station. 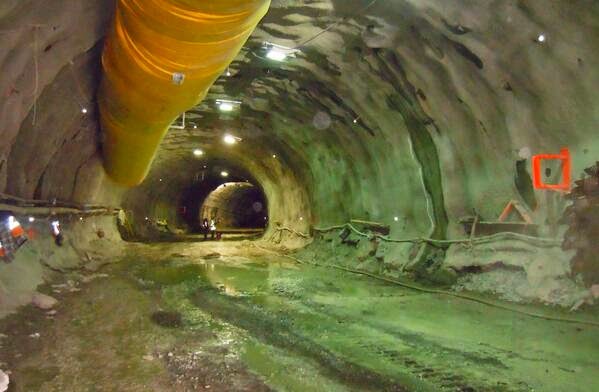 While Train 33 passed under the overpass, I got this overhead shot of these curious signs atop the coaches. Anyone want to guess what these are supposed to convey? I have a few ideas but leave it to you, my readers, to explain. 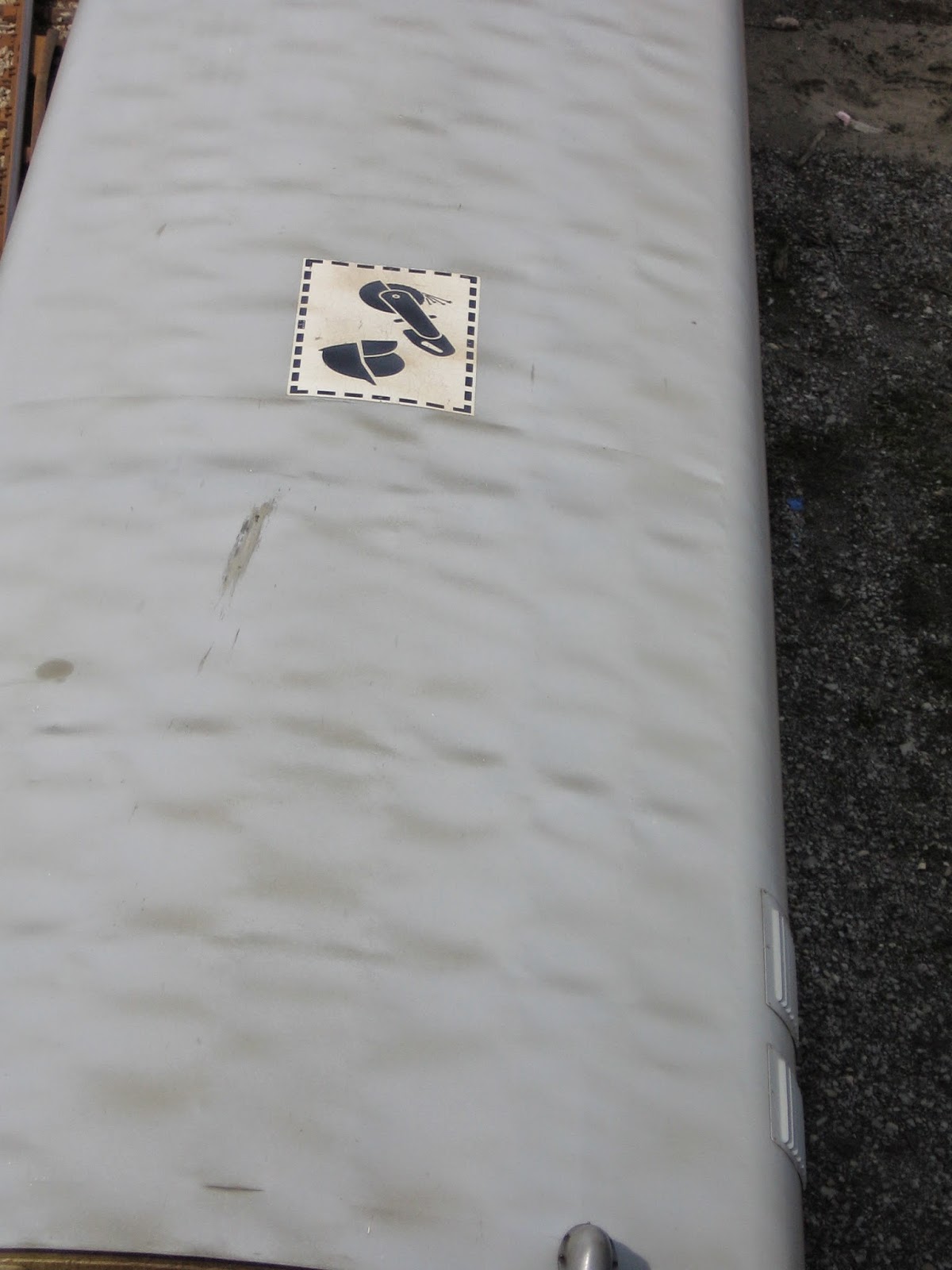 When I returned to the station, I waited for Train 50 to arrive from Toronto, but the train was delayed, so I had to make my way back to work, since my lunch break was nearly over. But I did snap a few shots of Train 33 beneath the long shelters. 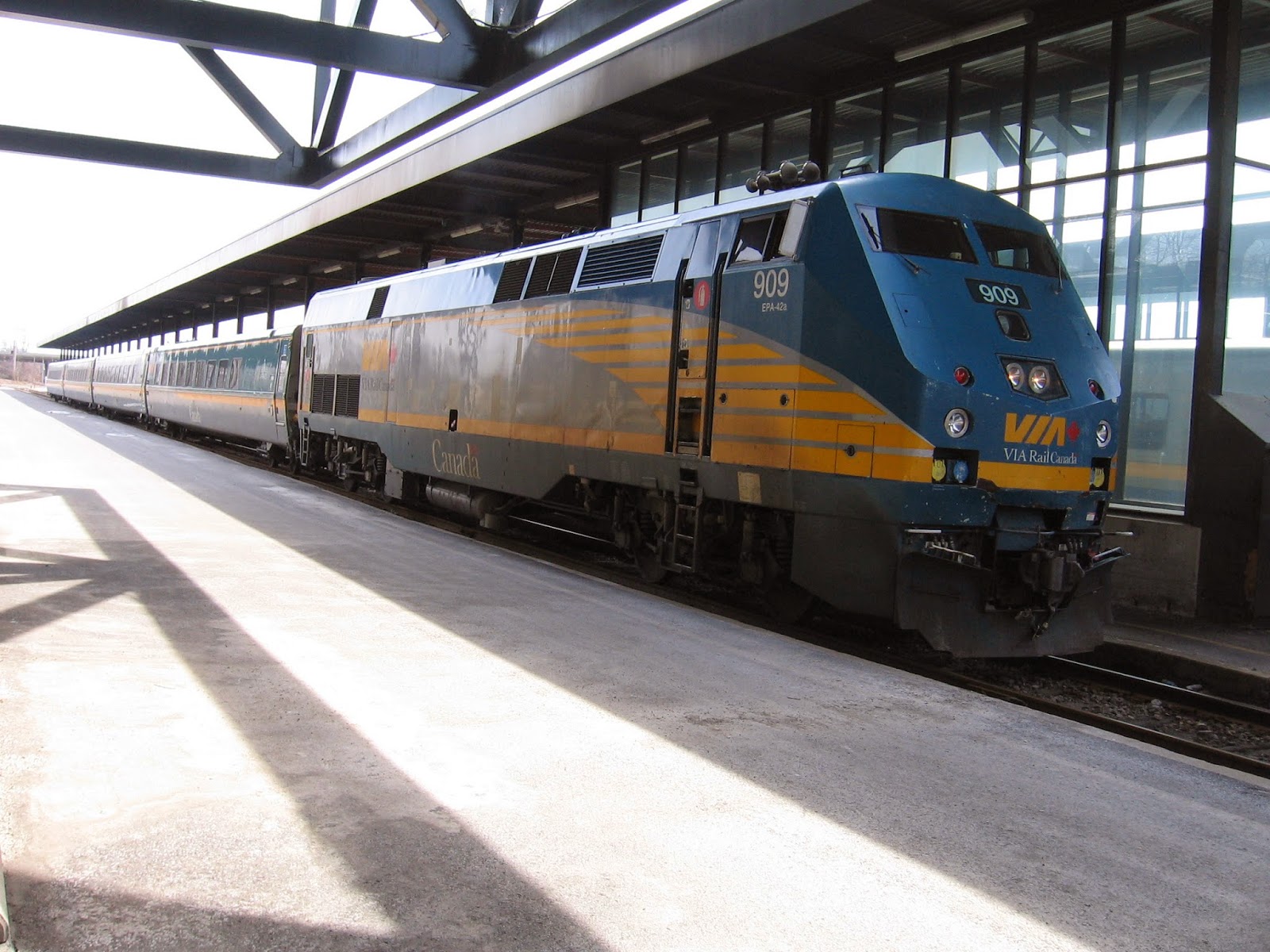 And then one final shot as it cleared the main line to make way for Train 50. You can see the idled string of streamliners to the right. 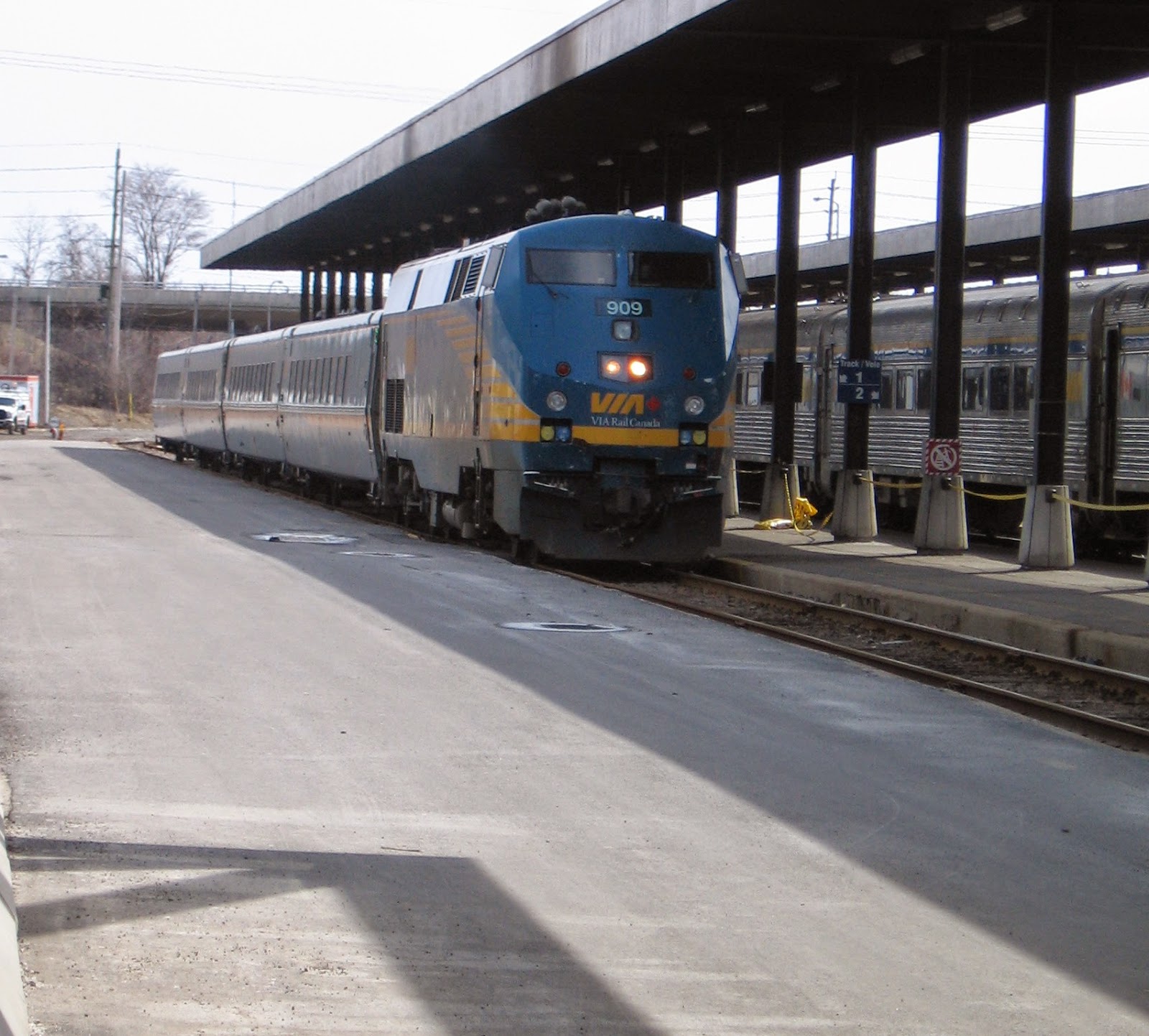 Another big story in the spring here, besides the LRT issues, is the ongoing problems with the level crossings near Via Rail's Fallowfield station in Ottawa's southern Barrhaven subdivision. I will tackle this in a future post, but you may recall the terrible accident at one of these level crossings, which made national news last year.

SHAMELESS SELF PROMOTION: Next week (April 30) marks the first anniversary of the Beachburg Sub. I am hoping to put together a highlights package of the past year. If any readers had any favourite topics they might want me to revisit, feel free to leave a message.
Posted by Michael at Thursday, April 24, 2014

I would say that symbol is a "cut here" for rescue crews.

Yes, Michael, anything you can add on the series of emails I keep receiving from VIA about Fallowfield's crossing protection would be most welcome!

Thanks for this series of verdant vernal VIA vistas! Even a Ren consist snuck in there, oh, and a refurbished Business Class car.

Icicles on the VIA sign...classic.

Thanks for the comments, Steve and Eric. I do think Steve is right. The circular saw is clearly visible in the pictogram, but the disembodied firefighter's head was a little harder to make out. And Eric, I will continue to view the vast variety of Vias with vim and vigor!