The changing colours on the Sarnia Sub

Railways don't change their image all that often. Union Pacific, Norfolk Southern and CN are good examples of railways whose diesels have looked remarkably consistent over the last twenty years. CN's last major change occurred when it ditched its safety scheme for the CN North America scheme, which quickly gave way to the current CN look, complete with web address beneath the wet noodle. One railway that has bucked this trend is CSX. This railway, which was a creation of a number of diverse railways, has always been colourful, particularly on its oftentimes orphan Sarnia Subdivision. 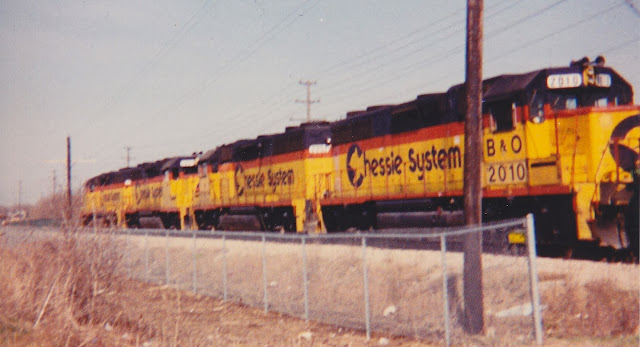 Above: Chessie System quadruple header makes it way through Corunna en route to Sarnia in Spring 1991. The railway ran the vast majority of its manifest freights with two GP38-2s at this time.

For years following the merger between the Seaboard System and Chessie System (which were in turn the result of the merging of a number of smaller railways), the GP38s on the CSX Sarnia Subdivision wore mainly Chessie System colours, with the yellow, orange and vermillion blue, although it often looked more like black to me. This was likely the result of the fact that the Sarnia Sub was formerly a C&O line. The above photo shows the rare combination of four Chessie diesels, some still bearing the markings of their original railway on the side of the hoods. You can see the B&O marking on the final GP38 in the above shot. In 1992 onward, those cab markings were removed in favour of a smaller "CSXT" marking, which was likely the precursor to being repainted in CSX's original grey and blue scheme.

One exception in the 1980s and the early 1990s was a scattering of units still painted in the B&O and C&O blue scheme. You can read the story of the below B&O unit here. A reader noted in that post that GP38-2 2100 was also a frequent presence on Chessie's Windsor operations around the same time. How this unit escaped repainting is an interesting question. One explanation is that CSX's Canadian operations were at the edge of the railway's network and often lagged behind the rest of the network in appearance. 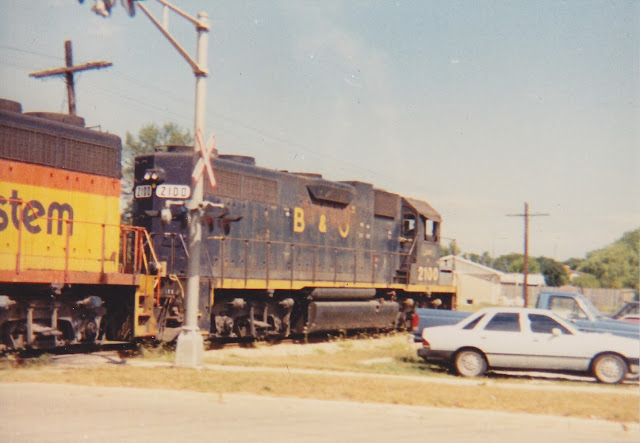 The early 1990s brought changes to the sub as the first of the GP38s began to appear in CSX colours. They were often paired with Chessie units. Notice how the fuel tank and trucks were repainted along with the rest of the unit in the shot below.

There's no question that CSX is a strange name for a railway, although it seemed less odd after Burlington Northern Santa Fe morphed into BNSF. I read about the origin of the CSX name. The C in CSX stands for Chessie System while the S stands for the Seaboard System. The X is the symbol of the merger and the fact that the combined entity was obviously much larger and more dynamic than its predecessors. That was the rationale at the time, anyway. 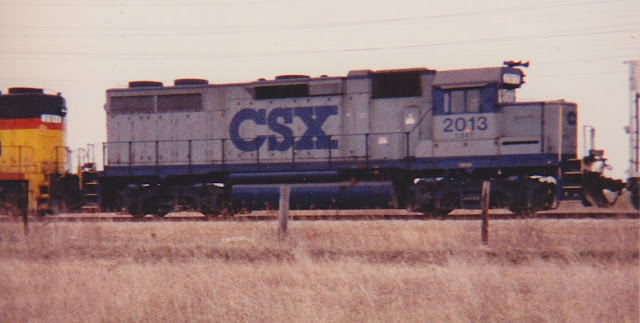 In about 1993, a single unit appeared on the subdivision with a yellow stripe added (GP38 2006). This unit was a tough one to capture in a photo. I recall chasing this unit for months before I finally caught up with it around sunset near the CSX Clifford Street rail yard in Sarnia. There was a span of three to four years where the old Chessie units continued to work the sub alongside the newly painted CSX units, making for colourful consists. 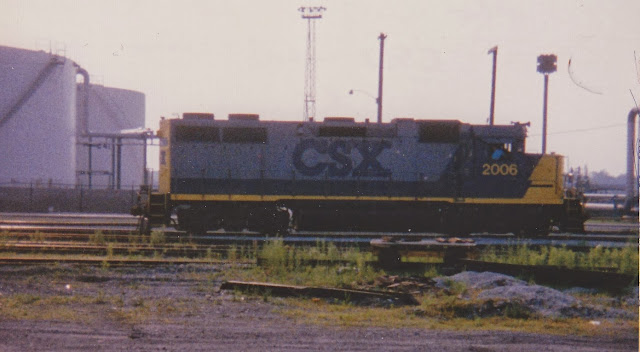 Above: CSX GP38-2 2006 near the Clifford St. station in Sarnia in July 1993. This was the first diesel on the Sarnia Sub to wear the newer CSX scheme.

Following this change of paint scheme, most units on the sub looked very much like GP38 2006 until CSX decided to make a wholesale change, going from grey units with blue and yellow trim to blue units with yellow trim. I'm not sure when this change happened, since I have not lived in this area for years and have only been in the habit of photographing trains on this sub very recently. When CSX began to adopt a new colour scheme, the essential design of the scheme remained the same, as did the logo. Last year, on a visit to the Sarnia area in October, I caught a glimpse of a few geeps in the blue and yellow colour livery. 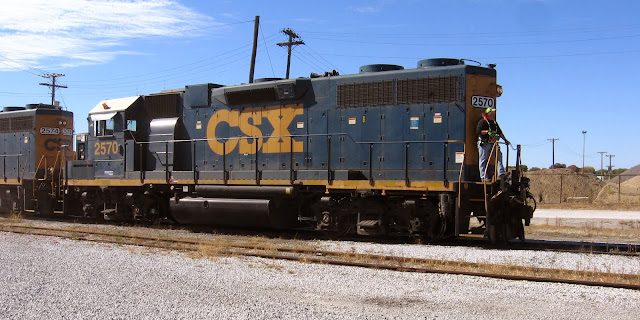 Above: October 2013 on the Sarnia Sub near Clifford St. in Sarnia as two GP38-2s in the blue paint scheme grind to a stop. Note the difference in the background from the 1993 photo above. Gone are the storage tanks, replaced by a gravel dock on the river.

The latest version of the CSX logo has been rolled out since last year, with a boxcar design being added around the CSX script. I have read some negative comments about the new boxcar logo, since boxcars aren't exactly the most popular freight cars on North American railways anymore. Some have suggested the new logo symbolizes container traffic. Either way, it's changed. I caught a unit on the Sarnia Sub with the new logo on Dec. 23rd. The engineer was kind enough to give me a wave as he brought his unit to a stop. Notice some of the modifications on the unit including ditch lights, the removal of lights next to the top number boards and what I am assuming are air conditioning units on top of the cab. 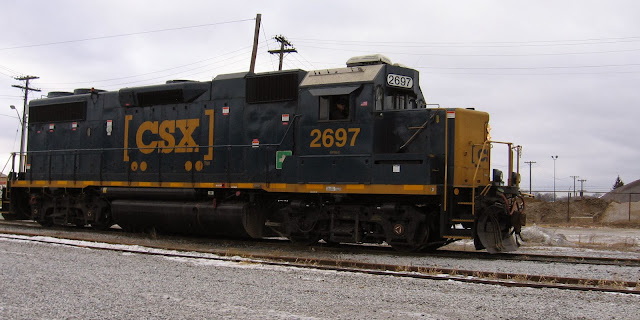 Despite the changes that the diesels have undergone on the sub in the last 25 years, the one thing that has remained the same is the type of engine used. Ever since I can remember watching trains on this sub, the unit of choice has been the GP38-2. It's been the one constant on a railway line that has sported many colours over the years.

Perpetually persistent perennial photography there, Michael! And, many of the units are years (no 2014, though).

Your post reminds me of the BNML 2 that was used for years in Winnipeg, renumbered BNSF 1685 and now a museum piece.

After that, a succession of different Geeps made the trip for service north.

Those white cab roofs remind me of the warm southern states! I observed 2692 in Syracuse in December 2012.

Thanks for this interesting post. I have been anticipating it for a couple of days after it appeared in my sidebar but wasn't officially posted yet. Well worth the wait :)
Eric

Thanks Eric. You are likely right about the cab hoods. They likely made their way to the Sarnia Sub from southern locales, which would explain the roof painting. Sorry about the tease on this post. It was posted accidentally earlier this week before it was ready. Glad you enjoyed it. Good shots from Manitoba!

Hi Michael,
I had a similar experience pre-posting by accident, and a faithful reader noted that the post needed some more work...yes, because it wasn't quite ready for prime-time! It just gets stuck in cyberspace for awhile until you set it free.