As I have mentioned numerous times, Ottawa is not exactly a hot spot for railways. Occasionally, I am able to make it out to Walkley Yard and to Via's two train stations to shoot some railway action here in the capital. But, to continue feeding this blog, I often have to get creative. Whenever my family travels south to see family, for example, I always get the itch to do some serious railway photography.

This brings me to one of the hardest places to shoot railway action: Ontario's Highway 401, or the 401, as Ontarians call it. I usually get my wife to drive through the spots on the highway when the road parallels either Canadian National's or Canadian Pacific's main lines, which are clearly visible from different parts of the highway in the Toronto area and at points further east in Durham Region and near Kingston.

When reading Trains Magazine last year, I was blown away by a photo in the back gallery, which showed a steam locomotive in full flight, racing beside a highway. Someone took a great shot from the passenger side of their car. Heck, I thought, I have a nice digital camera. I can do better than that.

Exhibit One: This is the shot of the tail end of a westbound Via train, pulled by a P42 and featuring an attractive mix of streamliners just east of Kingston on Aug. 9, 2013. I steadied my camera and kept waiting for the train to come into focus in between clusters of trees that blocked my view. This is a stretch of track that runs through a wetland just before it ducks into the city proper. 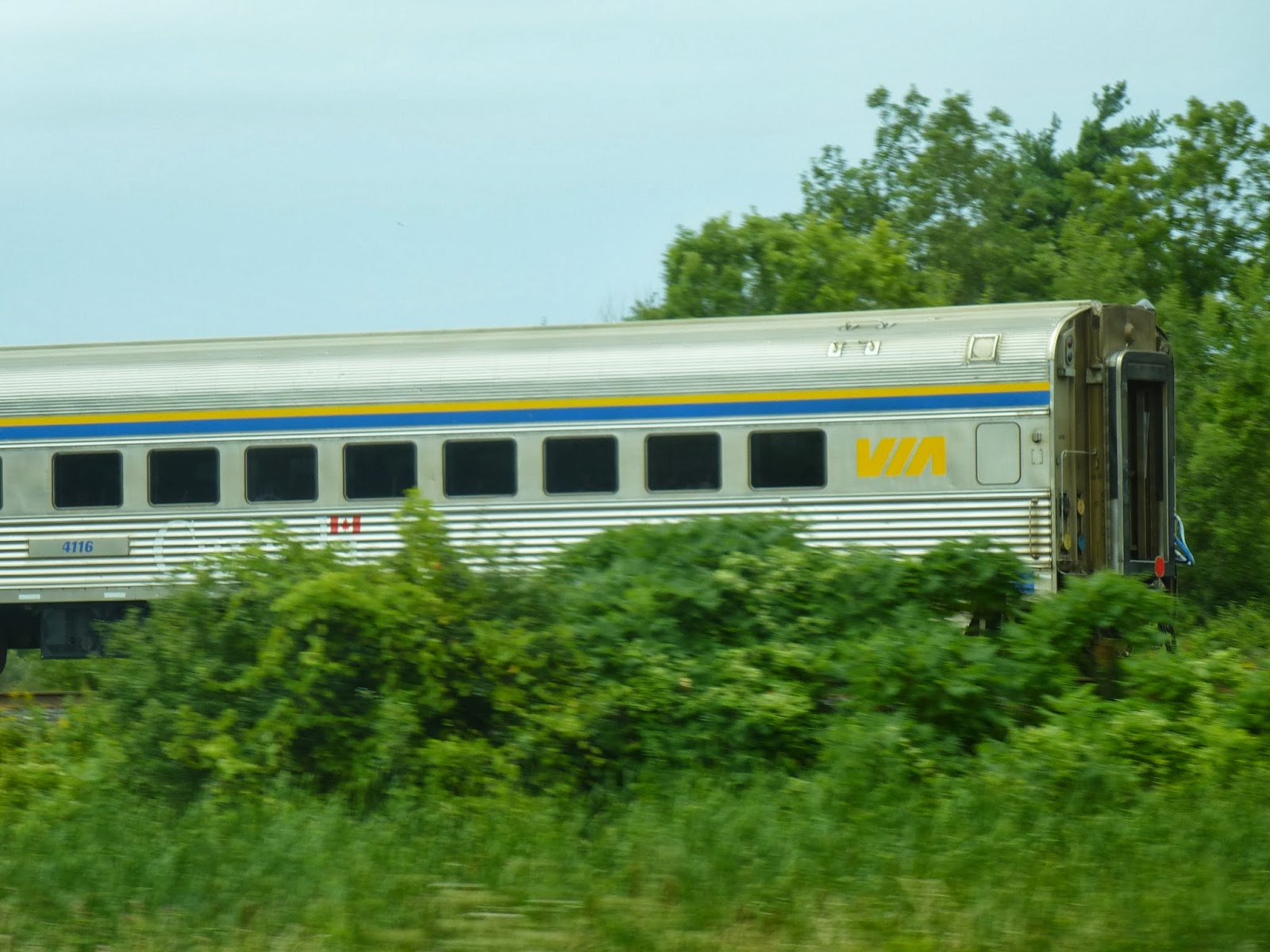 Not much to look at, although I saved this one salvageable shot for the purposes of this post. You can see the hint of movement in the greenery at the bottom of the shot. But, for the most part, this was a disappointing shot. When I saw the results of this hasty photo shoot, I knew this process was going to be a lot trickier than when I marvelled at that in-motion shot in Trains Magazine.

Over the Christmas break, as my family was making its way home to Ottawa and heading east through Toronto on the 401, I saw a manifest freight making its way west toward Toronto. I knew this shot would be harder to catch since we were heading in opposite directions, each going at quite a clip.

Here is the result. 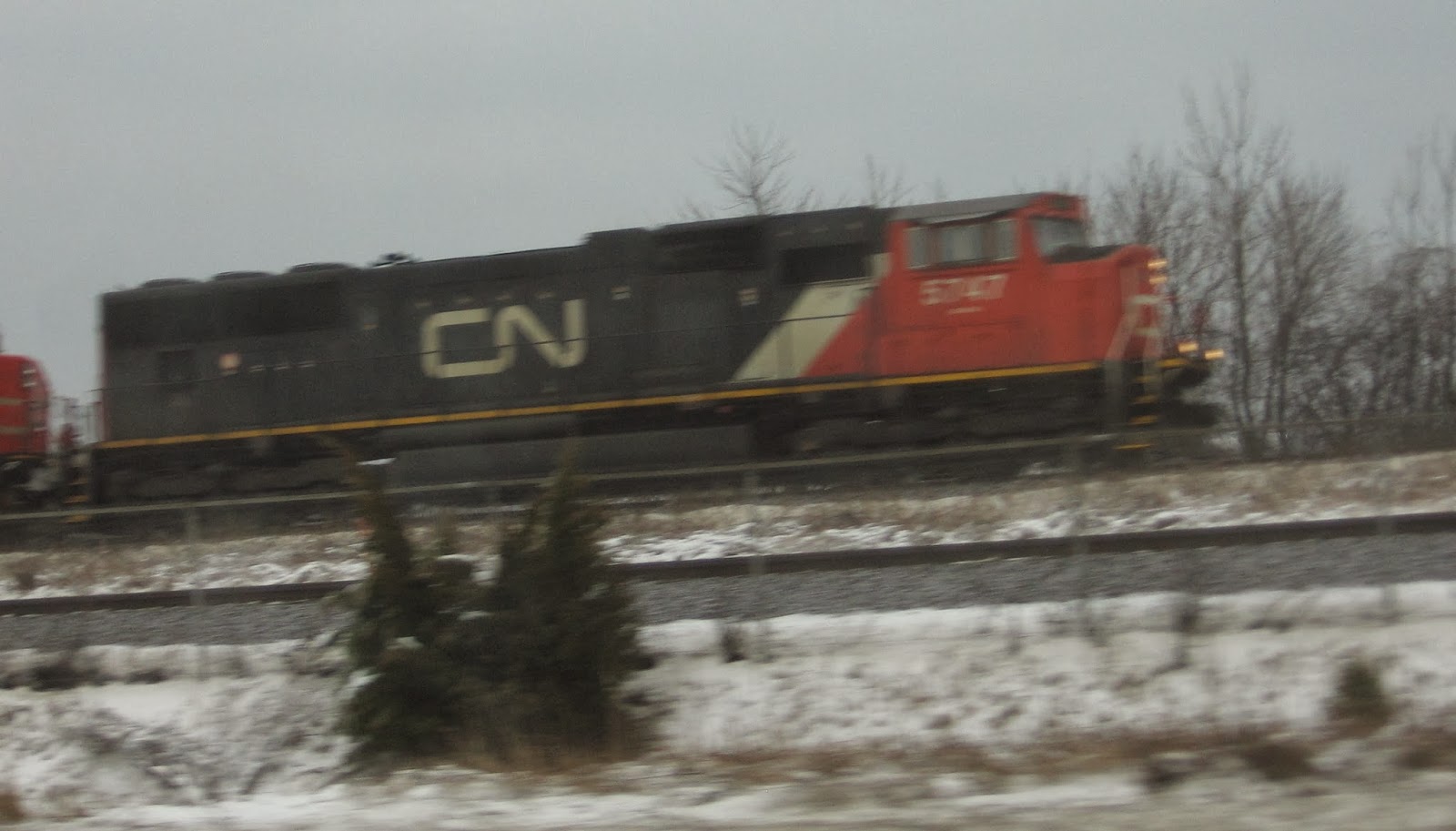 Again, this shot is not much to look at. I was happy I did manage to catch 5747 in the frame, unlike the shot above. I was unable to take any more shots of the train, as the road dipped too far below the right-of-way. It's too bad since there were some really interesting cars in this consist, including some Saskatchewan!-branded grain cars (with the exclamation point).

So, the quest will definitely have to continue for the perfect in-motion shot. I'm not sure when my family will next find itself on the 401, but I will have my camera on hand.

To give you an idea of the type of in-motion shot I would like to capture, here's an example of the drama I am aiming to show. 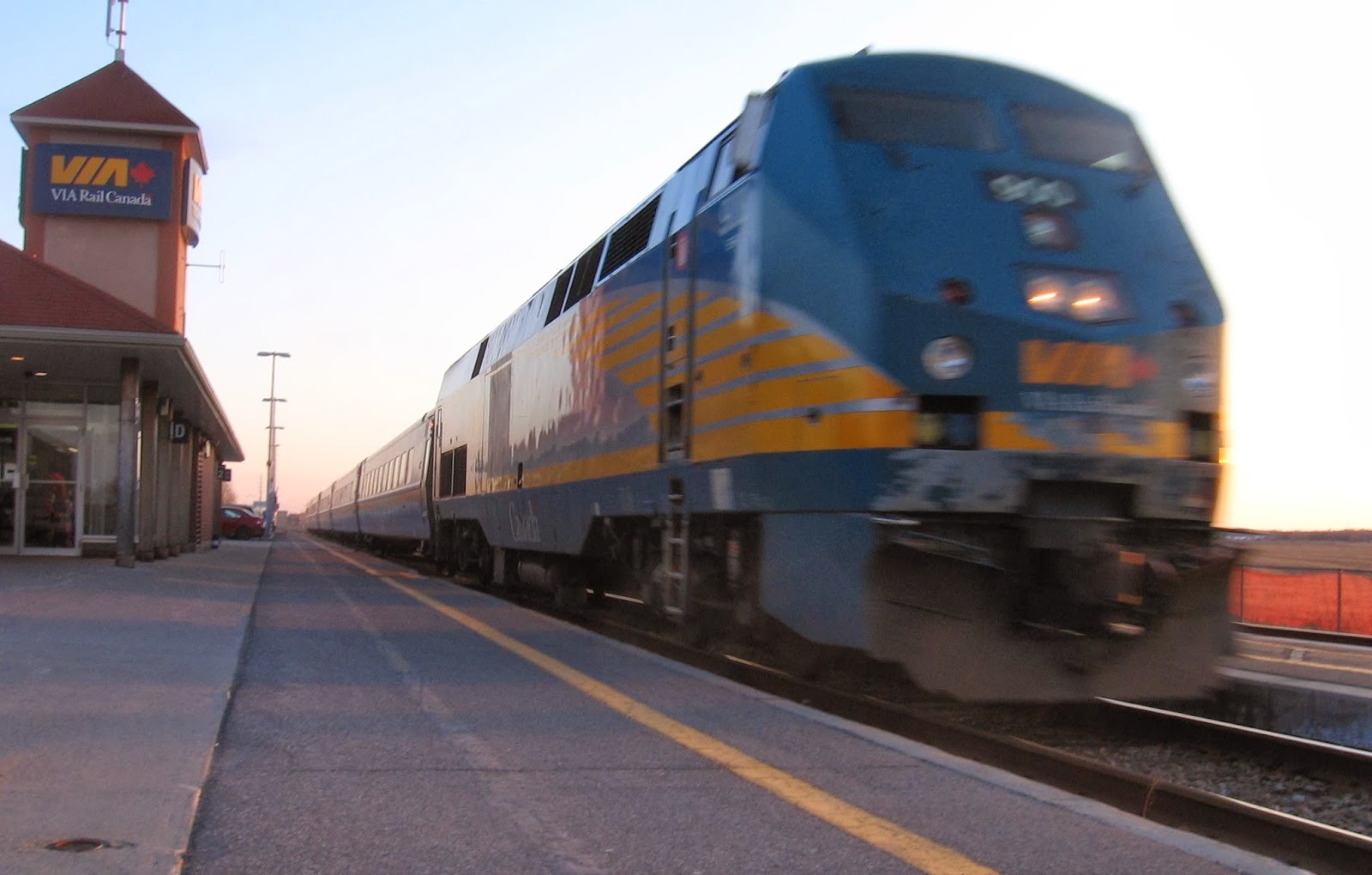 This was taken April 13, 2012 at Fallowfield Station in south Ottawa. This shot was previously featured in my post Favourite Train Photos #1. Okay, so I was stationary on the platform at the time, but you get the idea. There is something about capturing the speed and power of a train in motion that best explains my passion for these machines.
Posted by Michael at Thursday, January 23, 2014

Thought of your post while paralleling the 401 last night, Michael. We met an eastbound VIA at a closing speed of probably 130 mph.

Relatives from Quebec liked to pace parallel trains along Bath Road from McEwen Drive to Collins Bay Road here in Kingston. Hard to do now, since three traffic lights have been installed at intersections. Plus, passing cars, poles, shrubbery all tend to get in the way. It's a challenge.

There is a good stretch of parallel driving east of CN's Belleville yard on north side of tracks along Airport Parkway. Also west of Belleville south side on Moira St West, if you happen to be off the 401.

Heading home from Quebec along the "two and twenty" near Beaurepaire QC in October 1978, this show of VIA 6759 was the result: