Although I am by far the biggest railway fan in my family, we all have a certain fascination with trains to some degree. With that in mind, I thought I'd share some railway photos taken by family members that have been left in my care.

As I have previously mentioned, my Dad worked for the Candian Pacific Railway in his teens in Windsor, Ont. He had been offered a job with the railway, but was lured away by a better offer from what was then known as Ontario Hydro. However, in our family photo archives, there are some scattered railway photos that my Dad took with his excellent Canon 35-mm camera.

My Dad took this shot below in 1987, I believe. The locomotive is a Canadian National U-1-f class steam engine, more commonly known as a 4-8-2 mountain-type. The engine was one of 20 such workhorses built for the CNR in 1944 by Montreal Locomotive Works. 6069 was converted from coal to oil at some point, although some of the 20 4-8-2s were originally constructed as oil-burners. Nicknamed "Bullet Nose Betty" for its cone-shaped smoke box door cover at the front of the engine, this beast has been on display in Sarnia's Centennial Park for about 40 years, with its original dark green trim. The weather has been tough on the locomotive, which has prompted local rail enthusiasts to restore the engine. Two other 4-8-2s like this one remain on display, one in Alberta and one in Capreol, Ont.

You can see a piece of CN's old Point Edward spur in the extreme left of the photo. This track leads to the grain elevators on Sarnia's waterfront. This line is still operational, as CN continues to service the elevators on this tiny branch through the park. Those wishing to see Betty these days are out of luck. Due to its industrial past, Centennial Park has been quarantined due to asbestos in the soil. It is not known when the park will be cleaned up and re-opened for public use. 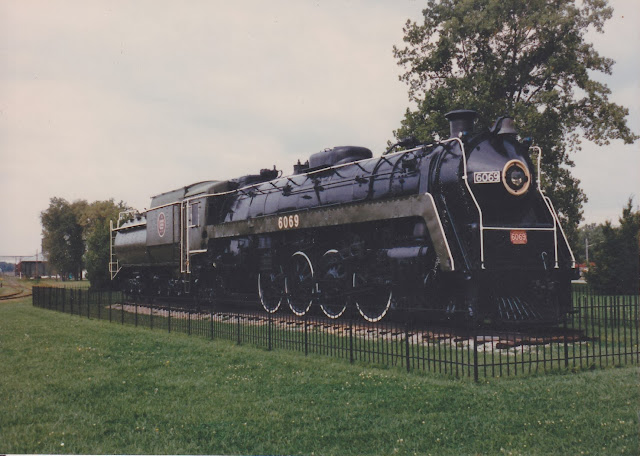 This second photo was taken by my sister, in August of 1992. As I mentioned in my two previous posts (Banff 1992 Part I and Part II), my sister lived in Banff during this summer and took me to Banff Station to let me get some of the best train photos I have ever taken. After I visited her in Banff, my sister and a friend went to Jasper National Park one weekend on a hiking adventure. It was during this weekend that she went out of her way to visit the local rail yard to capture a few photos for me. I like this one because it features two SD-40-2Ws, 5289 and 5331. What I also like about the shot is that it captures part of an old CN caboose (far right).

This final shot is the image that inspired this post. My brother, like me, has always been fascinated by trains. In my teens, he often helped me with my train set and often drove me around to rail yards, when I was too young to drive. While at work a few weeks back, I received an email from him while he was on the road for business in San Diego. The shot was taken from his hotel room in the city. He took a quick shot of a BNSF autorack train making its way through the city. He isn't as up to date on railways as me, but he correctly identified that BNSF stood for Burlington Northern Santa Fe, although BNSF technically stands for nothing these days. What strikes me about this photo is one of the locomotives leading the train has been defaced with graffiti. I don't see that often. 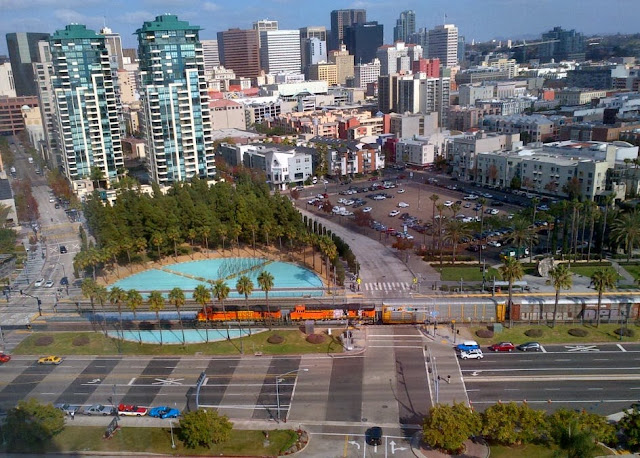 My family has always been understanding of my passion and has contributed over the years. I'm thankful that they did.

Those tracks through downtown San Diego are quite interesting, because they head right through the centre of the city and trains have to crawl along at 10mph. When I last visited, I was surprised to see that the San Diego shortline railroad there had an ex-CN unit (still in CN paint) as a switcher.

Some nice phamily photography here, Michael. You've certainly affected (?infected) your family members in such a way that they want to feed and contribute to your interest.

In our family, we never stood a chance. Completely affected, and some of the contributed shots to Trackside Treasure continue to prove that!

Thanks for your comments, Bryan and Eric. I do have my family well trained, indeed. My one regret when I see the Jasper and San Diego shots is that I haven't been to either spot myself to do some shooting!

Michael, CN6069 was never converted to oil and is in fact the last bullet nose Locomotive still in it's original coal fired condition.