Two trains in one day in Ottawa? It’s not as tough as you might think, as this city continues to be a busy hub in Via Rail’s Windsor-Quebec City corridor. But in early October, I managed to catch two trains in one day and one of them was CN’s weekly west end freight train, the Arnprior Turn, as they call it. It took a little bit of luck, as it usually does.

I was in Kanata checking out a federal government office building, where I am now working once a week, as part of the government’s mandate that all public servants return to the office. I won’t get into the absurdity that I can telework from a generic government office and fulfill my back-to-work commitment, but I can’t telework from home on that day. Either way, I don’t have to return to my employer’s actual main office in Hull.

Anyway, as I was returning home after checking out the office building, I saw the telltale light from an old geep winding its way slowly down the Renfrew Spur. At the moment, I was on Carling Avenue, which follows the tracks for a short distance east of Kanata. I was able to turn off Carling and found my way to Bayfield Avenue, a tiny residential lane that has an unprotected crossing with the tracks, with only a set of crossbucks and a stop sign. 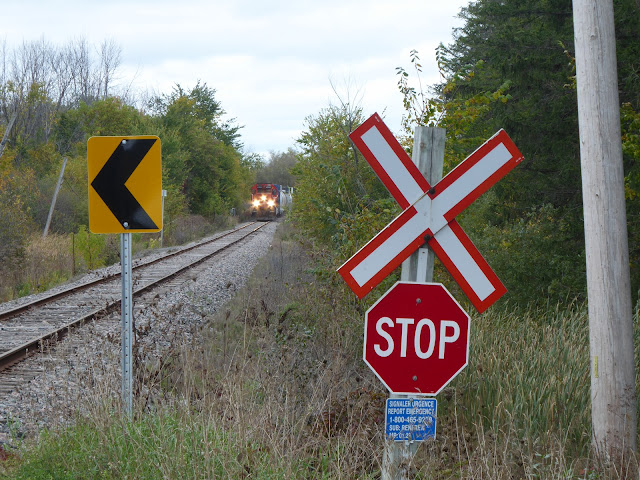 I have to say that I was excited to get a shot on this seldom used street. It affords you a chance to get a shot of trains from an interesting angle up close. I started by taking a shot of the signage. Notice how the Renfrew Spur is not listed as a CN property. It is listed as the Renfrew Subdivision, which is a legacy of its former status. It’s technically a spur now. The official name of this rail line is the Arnprior-Ottawa Railway, which is owned by Nylene Canada, its only customer in Arnprior. The rails are owned by the company while the land is owned by the city, which inherited ownership from the former Regional Municipality of Ottawa-Carleton. 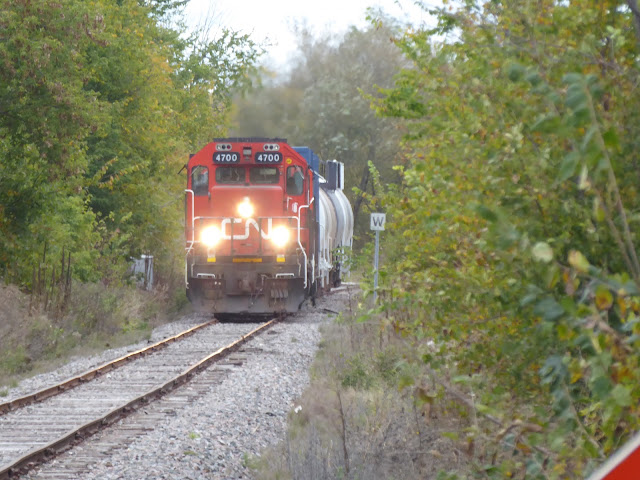 The crossing gives you the opportunity to get a shot down the tracks, since Bayfield has almost no local traffic except for people from the handful of households on the street. After framing the train alongside the signs. I tried one shot without the signs. Given the low speed limit on this line, you have lots of time to set up these shots before moving back to safety when the train gets back. 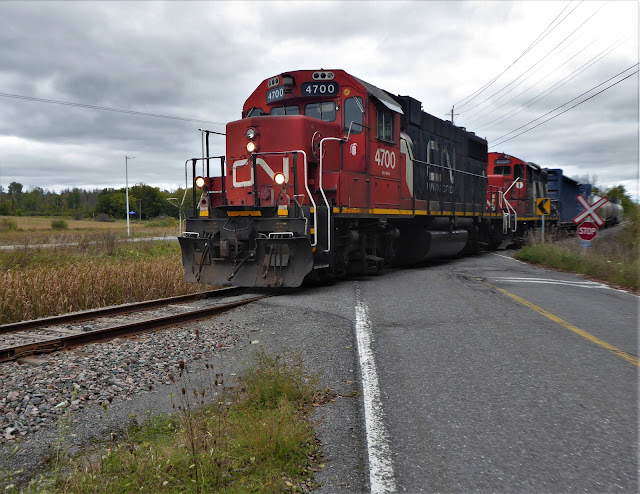 This is not the type of shot I take all the much anymore. I don’t really like close wedge shots as much as I once did. However, I was happy with this shot because the angle of the tracks gave me this dramatic shot. You can even see old GP9 4140 behind the lead unit, CN GP38-2 4700. I was surprised to see the old geep in the consist. It’s been years since I saw one of these old geeps in Ottawa. You can check outmy tribute to the GP9 in this post. 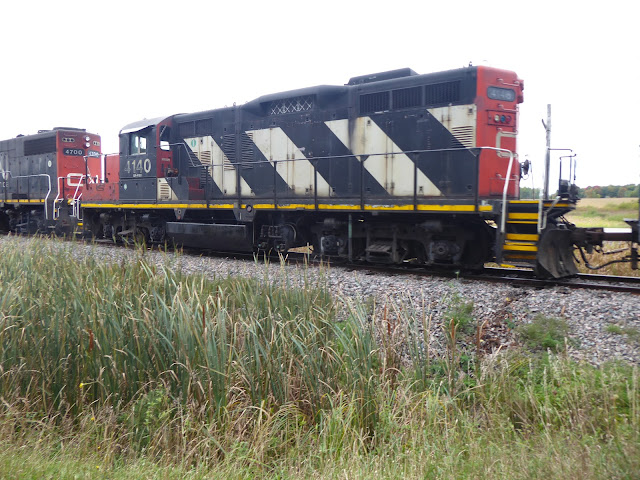 I was also happy to catch a lumber car in the consist. This is the first time I have seen one of these cars on the weekly west end train. 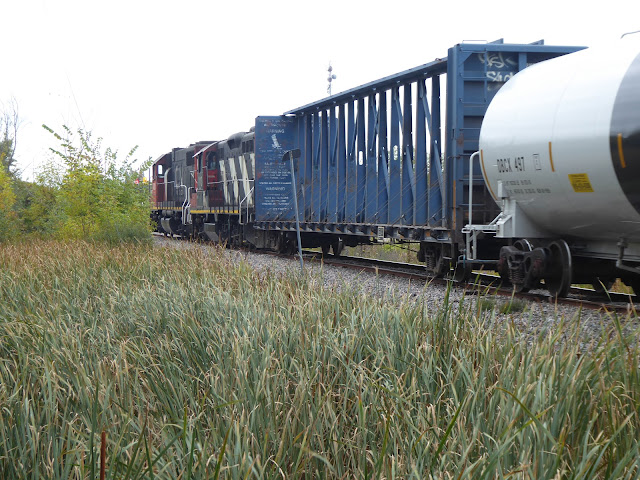 Later in the day, I was waiting for my daughters to finish their weekly dance class in the Colonnade Road area, close to the Federal Junction where the Beachburg and Smiths Falls subdivisions meet. Since I am there at the same time each week, I was able to see Via Rail Train 59, westbound for Toronto at the same time. My first attempt to get this train was atop the Hunt Club Road overpass, which I snapped on Sept. 28. 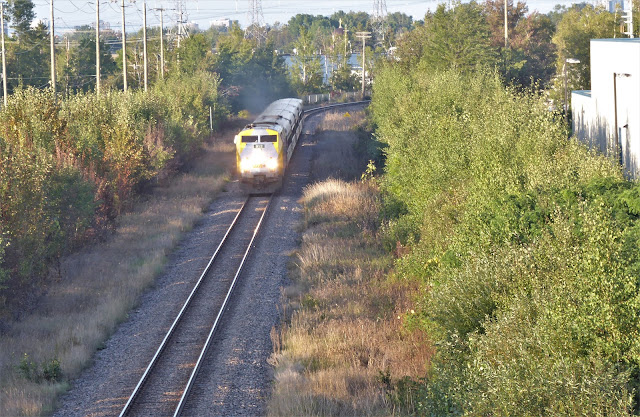 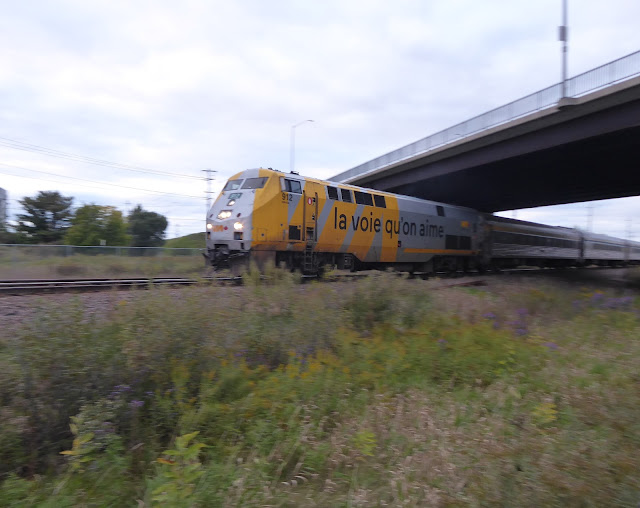 As the daylight was getting shorter, I figured there wouldn't be many more chances to capture this train with decent lighting, but I managed to squeeze in a few more shots in subsequent weeks. I am not in the habit of taking shots of Via Rail trains at Fallowfield Station or the Central Station, since I have so many shots from both places. I am really trying to find new places with different photographic elements, so this area is a new challenge for me. I like that this train is using the old silver streamlined cars. It makes up for the P42 in front, as this engine my least favourite locomotive to shoot.

All in all, it was a fun day trackside. Given that it happened in Ottawa, that makes it all the more special. You always feel like to earn everything you get in this city.

Oh man - we need to chat as they're trying to haul me back to Hull twice a week for definitely no other reason but to have me sit in a chair and do what I can at home (that's all I'll say as I am incredibly frustrated about this and how its permanently changed my family's long term plans and not for the better). If I am absolutely forced, I would much rather drive across Kanata instead. Plus if there is some railfanning, it helps!

Good catch nonetheless. I haven't caught the Arnprior turn in a few years and always seem to not have good luck with that on days I try. The sightlines on Bayfield look great too in the picture. I always thought that would be an interesting spot to catch it.
The fact that you caught a GP9 is pure awesome. Its been years since I have seen one in the city. Always liked those. You definitely nailed it by calling them scrappy. BTW any thoughts on why a lumber car was in the consist?


"You always feel like to earn everything you get in this city"
100% agree with you!

I really like that shot of VIA at speed... you can feel the momentum!

With that "wedge" crossing shot, I'd be tempted to crouch low or even lay down to get a different perspective - not something I would recommend on a busy road, of course!

Thanks for the comments, gents. I feel your pain, AJ! I have gone very long stretches without seeing a thing, never mind seeing the Arnprior run, which can be like a ghost at times.

A good thought, Steve. I think I may have been crouching a bit for that shot. It's been a very long time since I've shot anything in the wedge 3/4 vantage point. I am not interested in this type of shot all that much anymore, except on occasions like on this street, where you can get a feel for the impact of a train on rails up close.

I really liked the Via shot and the fact that the bridge is blurred a bit. This train was already gearing up to speed, although it would have to slow down in a few miles when it reached Fallowfield Station.