The GP9: A Scrappy Survivor

When I was visiting another blog a few months ago, I was interested in a comment about the fast-fading GP9s still out there in service. It hit me then that I have tonnes of photos of this unit from my years of sitting trackside. It also hit me that I might not be able to see these old beasts much longer. So I decided to create a small tribute to this unsung hero of railroading, which has done yeoman's work for decades without much glory.

The GP9 officially ended production at General Motors Diesel in London, Ontario, in 1963. The engine first sported a 16-cylinder, 1,750 horsepower engine running on four axles, not factoring in the B units and slugs that were produced as well as the CN GP9RM rebuilds. Some of the slugs are still in service in certain CN yards. Various sites online peg sales of the engine at 3,500 units in the United States and nearly 650 in Canada.

GM London's production of this unit actually ended four years later than EMD in the United States. The 2022 Canadian Trackside Guide says CN still has 29 in active service. CP has retired its fleet, with the bodies and chassis of the old locomotives used for its fleet of GP20C-ECOs. What seems strange to me is when I find references to these engines being preserved. It makes me feel old.

Searching through my photos from my teenage years, I found two early 1990s photographs of these geeps in Southwestern Ontario. The first shot is from Canadian Pacific's Windsor Yard, where GP9s were once a common sight. The most prominent GP9 in this shot is CP 1619, with a fast fading action scheme still visible, complete with the multimark at the rear. Beside it you can see CP 8226, in a more recent action red scheme. This newer one lasted a long time, as you can see it in action on the Galt Sub in this photo in 2008. Although these two units look similar, note that they are numbered in different series. Scanning through some sites online, it seems CP had these geeps numbered in the 1500s, 1600s and 8000s. I tried to find a more recent shot of 1619, but was no able to find anything worth a link. You can also see a piece of a lumber car to the left in this shot from 1991. Note CP's unique high number board plates and classification lights above the front windows. 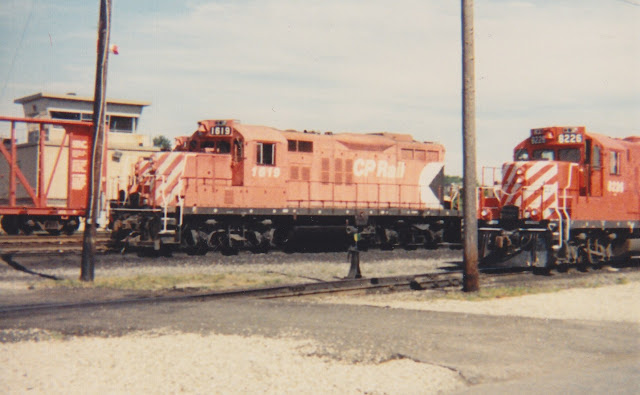 Closer to where I grew up in Sarnia, I did come across GP9 rebuilds a few times in the 1990s, although at that time, CN's stables of SW1200s shared local switching duties with the GP9s. Here's one of my earliest shots of a GP9RM from Sarnia Yard, when you were able to roam the yard more freely.This shot below is of CN 7226 with slug 259 in front. It was an unforgiving day for sun when I took this shot in 1992. No amount of photoshop could fix this. You can see how CN's number boards were not mounted on extra high plates like their CP counterparts. In fact, their number boards were much smaller and oval shaped.

The slugs are very useful in yards like the giant Sarnia Yard, as their traction motors allow the GP9's horsepower to be distributed more widely, which gives the unit more leverage to pull long strings of cars at low speeds. Great for switching duties. There are still a few being used in Sarnia. 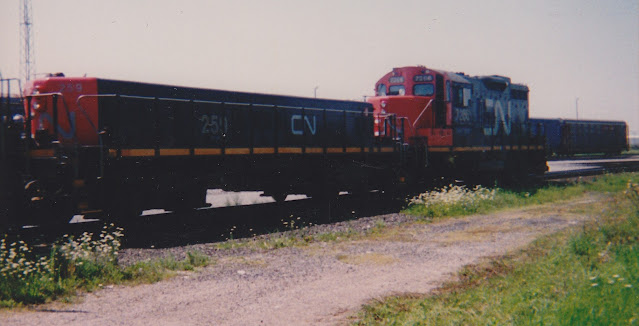 This shot was taken at a time when CN had yet to privatize and seemed to operate as a very different railway. It was not uncommon at this time to find 15-20 units all parked and idle near the CN roundhouse. This is not the case today.

Fast forward to the 2000s and you see that these old beasts are still kicking up a fair bit of smoke in Sarnia Yard and in CN's local operations. This shot below is one of my favourites, taken just south of Corunna near the Rokeby Line, as a CN local switched local petrochemical industries in August 2017. You can see three GP9s in this shot, two are able to be identified: 7038 in the lead and 7278 hitched elephant style as the second unit. The third unit, which is clad in the safety stripes, is not identifiable.

This brings up another interesting point. These units, which have been able to soldier on thanks to CN's rebuild program, can be found in their original mainly black scheme with the wet noodle on the side and the more recent safety stripes scheme. I have even seen one in the CN privatization anniversary scheme, but I have never seen one in the modern CN.ca scheme. 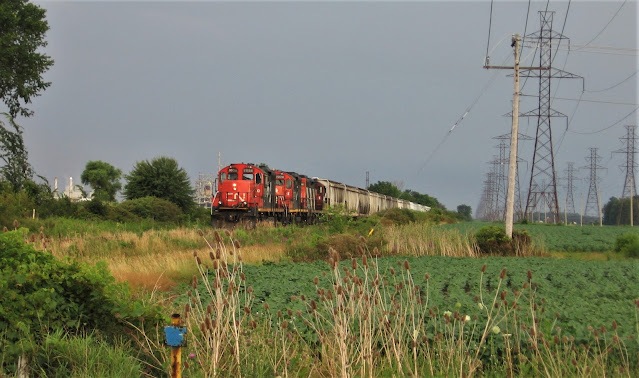 Here's a GP9 in the CN 15 scheme, celebrating the railway's privatization. This is not a terribly common scheme. I was lucky to run into GP9 7256 a few years ago on a brief stopover at Sarnia Yard in July 2021. It was pulling a long string of hoppers in the yard, with a carbon black from Cabot Carbon first in the consist behind 7052. 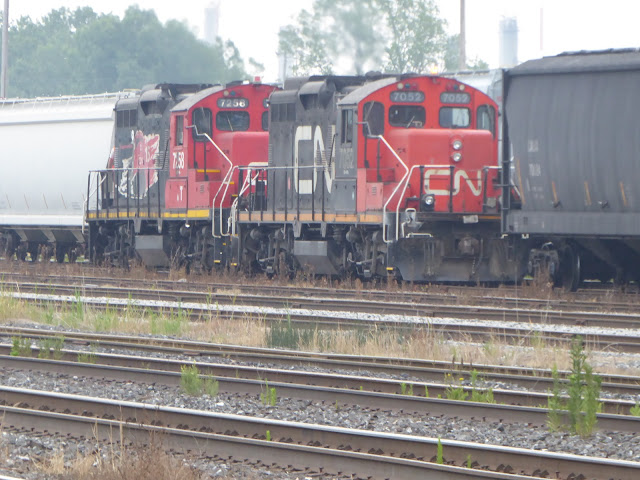 I should mention as well that, in the two years I lived in Peterborough in 2003 and 2004, CP's affiliate, the Kawartha Lakes Railway, often used GP9s and even a few SW1200s to service local industries on the line, from Havelock to Peterborough. I wasn't in the habit of photographing trains at this time, so I have no hard proof of these observations other than my memory.

One of the great things about these old beasts is they put on quite a show, if you are a photographer. You might recall a post from several years ago titled Smoke! where I was treated to quite a show in Sarnia Yard in October 2016. Here's my favourite shot from that post, below. The GP9 in the shot is coupled with what looks like a GP38. The real smoke is all from the old man, though. 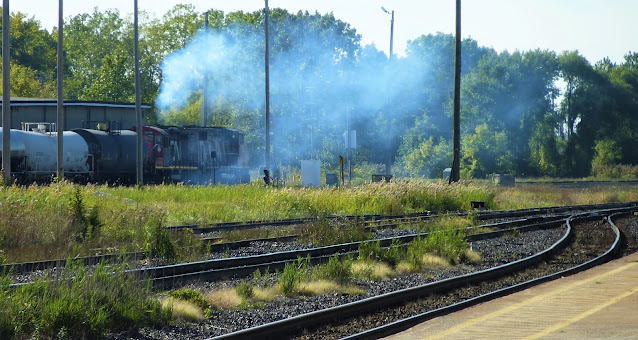 And speaking of those slugs, here's a more recent shot of a GP9 and slug still working the rails in Sarnia Yard in 2015 near the old roundhouse. Notice the old SW1200s in the background, which are either being repaired for industrial use or possibly scrapped for parts. 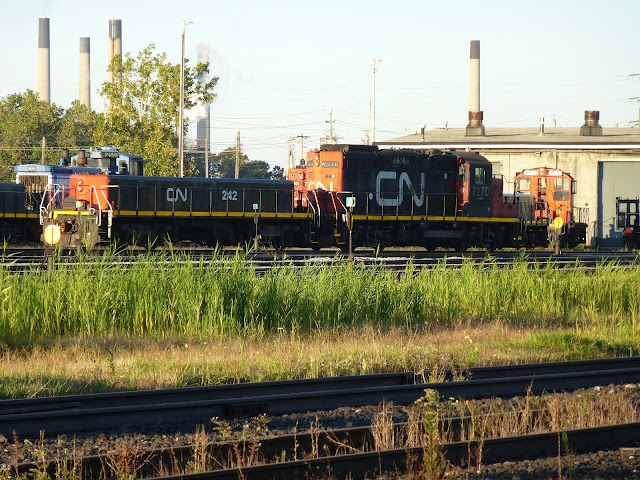 Of course, it's not just on mainline railways that this unit survives. The GP9 has long been a staple of short line railways, like the Goderich Exeter Railway. I caught this unit idle in Goderich in August 2014. Note its paint scheme. GEXR was once famous for painting its GP9s in a unique green and taupe scheme, with certain units being named after Shakepearean references. Many of the railway's units were later left in their leasing unit or previous railway schemes. 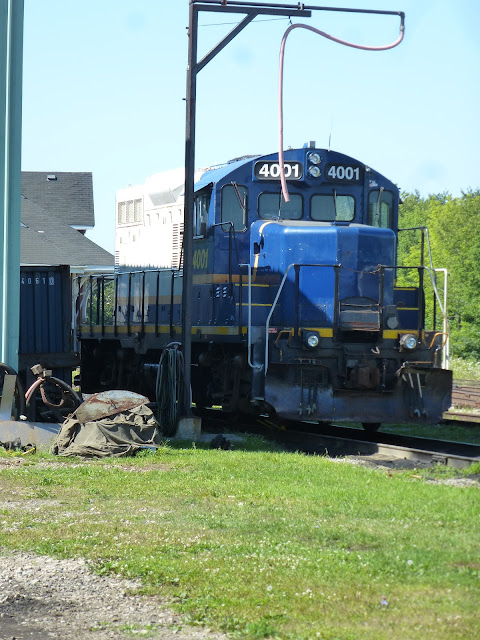 Surprisingly, even CN's operations up in Ottawa have made use of a GP9 on several occasions. Recently, the railway has made use of multiple GP38s, including some former GATX leased units. But as recently as 2017, the regional operations out to Hawkesbury and Arnprior were being handled by units like 4139, seen here near the Queensway overpass in the Greenbelt in 2017. I find this fascinating, as these units are not usually synonymous with long runs, like the 40-km turn out to Arnprior and the long 80-plus-km haul out to Ivaco in Hawkesbury. That's a lot of distance for a yard and local engine. 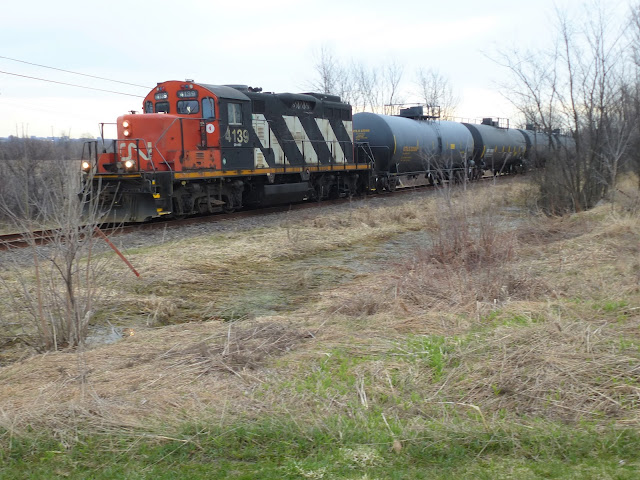 So why is this little runt of a locomotive worth discussing, remembering and preserving? Well, for one, it is fast becoming an antique, as the last Canadian units made are already 59 years old, and those are the youngest of the bunch. A quick glance through some sites online will show you that this unit propelled General Motors' EMD into the locomotive production lead, which was not the case before the GP9 was built. This brief article discusses how the market for road switchers was still very much the domain of Alco/MLW's RS series until the GP9 came along.

CN purchased 349 of these units while CP purchased 200. CP's numbers might be a reflection of the large number of MLW RS units it brought before the GP9 began production. Other Canadian buyers included New York Central, which purchased 12 for its Canadian operations in Ontario, Northern Alberta Railways (10), Ontario Northland (60), Toronto, Hamilton & Buffalo (3) and the Quebec North Shore & Labrador (54).

When you do see one of the surviving GP9s roaming around, take a shot. With their unique curved cab roofs and chopped noses, they are pieces of living history that are sure to fade quickly in the coming years. I am lucky that I was able to see so many of these engines in my time trackside. That's worth celebrating.

Nice tribute, Michael. You made me feel old by not picturing any high-hood units! Both CN and CP jockeyed roadswitcher assignments as they cycled these first-generation Geeps through the shops for upgrading. We had CN 4200's and 4300's on Flexicoil trucks on the Kingston Sub!

They truly are survivors, and their days are indeed numbered!
Eric

Thanks, Eric. I did deliberately mention the chopped noses of the GP9s in my post, because I know there was once a time where they had the high hoods. I have never been lucky enough to capture any of the high hoods. Might have been before my time.

Thanks for this, Michael. The GP9s have a special place in my heart as I saw them frequently in Saint John, NB when I first started railfanning.

That would be great, Steve. I smell a quick follow-up post. I just found a few other GP9 photos myself that would round out a follow-up post. You can send them to hammond.michael77 AT gmail dot com. Thanks!

Great stuff Michael. It's sad that the GP9's days are numbered as they're one of my favourite locomotive types. I've always loved the look of them. It's incredible how the youngest engines are almost 60 now yet are still chugging away for now. It's true what they say, they don't build them like they used to.

On a slightly different note, there's a GP9 on 589 in Ottawa at the moment. while I was in Kinburn this afternoon I saw 4140 slowly heading west towards Arnprior. I was able to catch up with them a little later and get a photo of it. A litlle bit of a detour but for a locomotive that is quickly nearing the end of it's life it was worth it.

I did catch a GP9 on the Arnprior Turn recently as well, Matthew. It's been a while since we've seen anything other than GP38-2s in Ottawa, at least in my experiences trackside. Stay tuned for those photos. Thanks for your comment.