Sometimes, you get a second chance (Part II)

As I mentioned in my last post, there are rare times when your train karma will grant you a second chance. I stumbled across one of those rare opportunities on a July trip to Sarnia last year with my family, when I chanced a last-second trip to the Sarnia rail yard.

In my previous post, I talked about a train heading for the tunnel, the front of which I had missed by seconds. I was disappointed to have missed the shot, but then something unexpected happened. The train began to back up. It didn't back up far enough for me to capture the engines in any meaningful way, but it at least allowed me a few going away shots. The train then inched forward. But then it backed up again. This happened for a while, which had me confused. (Note: I have since come to understand that part of the train was being scanned deep in the rail yard) The train was clearly not backing up to keep a switch to the main line clear. It was sitting over a busy switch at control point Hobson. So it was clear to me there was no meet happening with an eastbound train, since that would require this westbound to back up past the switch.

I stood there wondering what I could get in front of this train legally and safely, without resorting to trespassing (most Sarnia railfans will tell you not to even try this, as the CN Police are quite strict about any incursions onto CN property in the area).

So, I decided to try a last-ditch long shot. And surprisingly, it resulted in a shot I have never captured before. I went to the Donahue Bridge, a link between a south end residential neighbourhood and the northern edge of the Chemical Valley. The bridge actually soars quite high above the descending CN track in to the Paul M. Tellier Tunnel.

There's also a tiny stub-end city street that is used exclusively for trucks that use CN's CargoFlo service. That street was option number two. Lucky for me, the tunnel-bound train was still positioned at CP Hobson, obviously waiting the green light to proceed into the tunnel and head into Port Huron, Michigan.

Here's my attempt at a very long shot from the Donahue Bridge. You can see the Sarnia Station, signals and an SD70 on point. On the left side of the photo, you can also see a small piece of trackage that is the Point Edward Spur, which serves the Cargill grain elevator on Sarnia Bay. There's also a great deal of poles and lights in the shot, which isn't ideal, but it gives you the impression of a busy yard. I like this shot, but wasn't entirely satisfied that I had the shot I wanted. 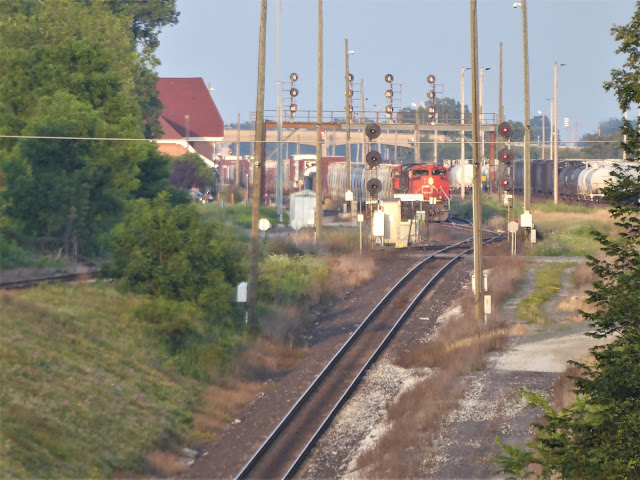 That's when I decided to try a shot from the sidewalk near Union Street, a tiny little dead-end slab of asphalt used by trucks to connect with cylindrical hoppers on a spur. You can see my previous visit to this operation in this post. But for our purposes in this post, here are my two attempts at getting some the CargoFlo infrastructure in the shot. You can also see Sarnia Station, the sign for CP Hobson and the trackage leading up to the CargoFlo operation. That turnout you see will lead you to CN's refuelling pad and the Lambton Diesel roundhouse operations. This area is a no-go, so stay on the nearby road if you want to have a look. 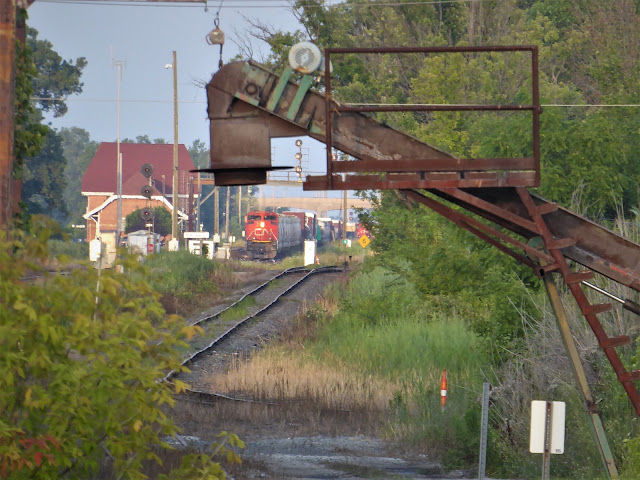 I like how the bushes and the loader eliminate the clutter a bit. Also, this angle means the white sign (look just left of the SD70) doesn't block the view of the engine as it did in my earlier shot. For my second attempt, I zoomed a little closer, making sure not to focus too hard on the loader. I like both shots for different reasons, but in this one, the train is definitely not as clear. And the zoom function is distorting the rails a bit. 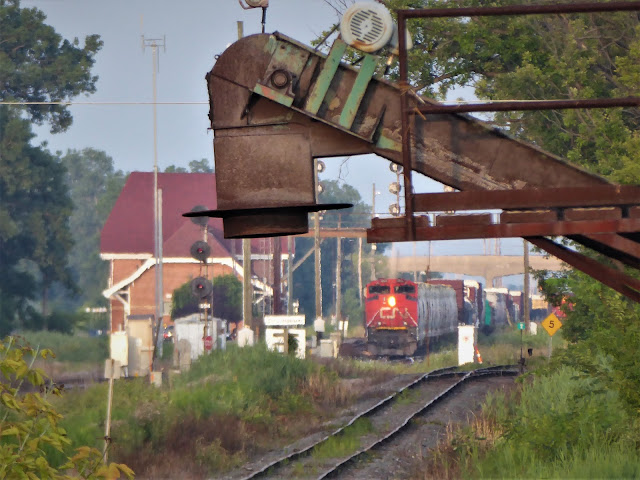 Getting the camera to properly focus was a tricky task, as there was so much in the frame. All of these shots taken from the bridge and the end of Union Street are quite busy. You can see Sarnia Station, the CN Hobson sign (white, next to the locomotive) and also the Indian Road overpass in the distance.

Since I was in the area close to the CSX Clifford Street rail yard, I drove to the end of the street to see if there was anything happening in the yard. I was not surprised to find the area pretty quiet. I was hoping that I might get lucky and happen across some CSX activity, but it was not to be. The CSX Sarnia Subdivision has seen some increased activity of late, as the railway has been carting away materials salvaged from the ongoing demolition of the Lambton Generating Station near Courtright (More to come on that in a future post). That process is expected to continue for a year or more, which means local railfans might expect to see a few different consists on the CSX line, most notably gondolas. I was hoping that I might be able to see something like that, but all was quiet.

Oh well. You can't have it all.

Thanks Eric. I like all three shots for different reasons. It's all part of my mission to continually explore new ways of capturing railway action. Call it an anti-wedge movement, if you will.

Great shots and good effort to get some unique angles. I like that middle photo a lot - the loader makes it.