As I mentioned in my last post, I managed to accomplish a number of firsts on October 20 when I heard CN's Arnprior Turn approaching my neighbourhood and decided to chase it. In the last post, I detailed how I just managed to get to Corkstown Road in time to catch the train, although the sunlight was essentially there to ruin my shots. There was much photoshopping that needed to be done to get some of the images into presentable shape.

But then I figured, given the slow speed of the train, that I could easily beat it to March Road in Kanata to get a better shot of it on the sunny side of the train. In other words, I decided to get greedy and try to capture the same train twice. In all my time trackside, I have never been able to chase a train and properly capture it multiple times. So this was a first for me.

Many locals who like to catch this train on its weekly run mention that the crew often stops the train short of March Road to grab a coffee at the Tim Hortons next to the Renfrew Spur. I decided to set up shop in the back parking lot of a commercial plaza, where there were a few gaps in the trackside brush, which would allow me to get some decent shots of the train. I did have to lift my camera pretty high to get these shots, so the brush was not dominating the images. 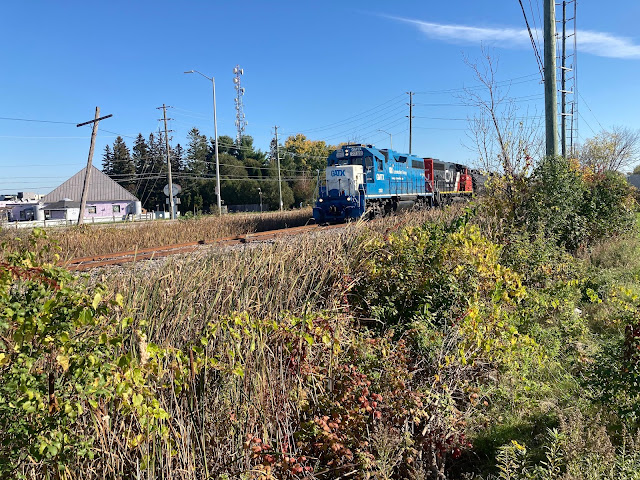 This shot above works pretty well, although I was a little disappointed that the gap I chose didn't allow me to see the entire train, which included seven tank cars. It was the longest freight train I have ever seen making its way to Arnprior. I shared that fact with a few friends of mine outside Ottawa and they thought that was quite funny. The GMTX unit is trailed my CN GP38-2 9411. I have seen this unit plying the rails in Ottawa before. Quite recently, in fact.
As far as a standard shot goes, this image below probably fits the bill the best. I liked how this image turned out as you can see both units and a few tank cars. The trackside brush prevented me from getting any more. I should also mention that there was a large ditch on the other side of the brush, which prevented me from getting to the other side of the bushes to get a clearer shot. My reasoning to stay at this spot seemed pretty sound at that moment. Since many have said the train stopped before reaching March Road, I figured I could get more shots when it was parked. However, it was not to be. As soon as the train passed me by, I could hear the engineer give the typical two long, one short, one long blasts of the horn, which told me the consist was heading straight through without stopping. Oh well. 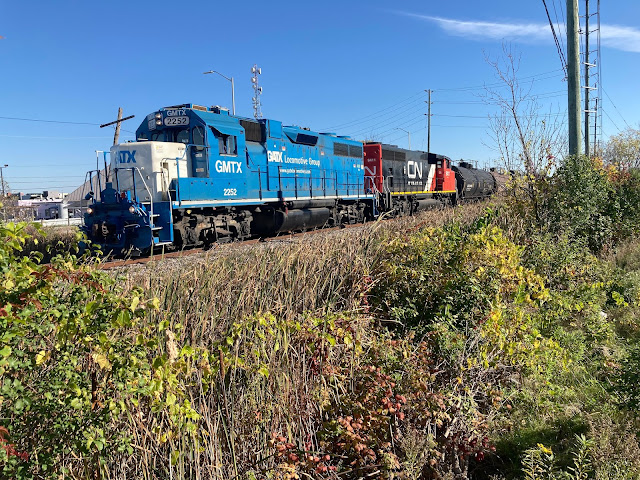 I did get a shot of 9411 on its own as the trailing unit. I should also mention that this was the first time I have seen this train using two units. This seems to be a recent development. In my years pursuing 589, the Arnprior consist has always been pulled by a single engine. I'm not sure why CN has made the change now. Without knowing any context, two units seems excessive for this train to me, unless the primary reason for the extra unit was dual-direction visibility. In other words, not pulling the entire train home long hood forward, as happens when there is only one unit. 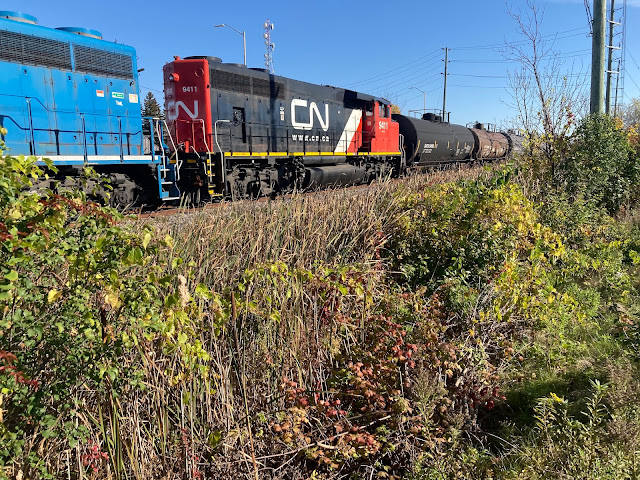 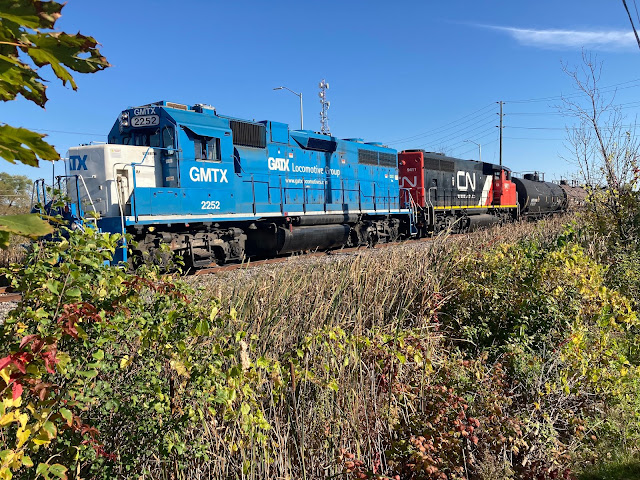 So here is a final summary of what happened on Oct. 20. I will list it by the number of firsts I crossed off my list.

If I catch 589 once more this year, I think I might break my own record. I have only ever caught it as many as two times in a year. Granted, I haven't worked from home like I do now with a flexible lunch schedule, so I'm not sure if this record is anything to shout about, but I'll take anything I can get.

I see that there has been a lot of chatter as to why this train has been shifting around its schedule of late, with the crew sometimes making its way on a Thursday and then on a Wednesday the following week. I have no idea why it hasn't been as consistent. My only thoughts are perhaps it has something to do with Kott Lumber's needs, since this customer on the Smiths Falls Sub, is now part of this weekly run. Some rail watchers have simply guessed that it has to do with crew availability, since CN's presence here in Ottawa is paper thin, to put it mildly.

Whatever the reasons may be, it seems like this train has become more visible on its weekly run through western Ottawa. Hopefully, there are more meets and surprises to come.

Thanks for sharing your greed, er, success, Michael!

I've noticed CN adding a second unit, and in some cases, a third unit to roadswitchers. My theory is increasing unreliability of increasingly old units!

I'm with Eric, I imagine the second unit is to ensure the train doesn't die along the way!

Thanks for the comments, gents. I never thought about reliability issues of the old CN four-axle geeps. Maybe you're right. Maybe it's a matter of the train not stalling out on the rickety old Renfrew Spur. If that happens, it would be a long wait for help, as the Ottawa area typically only has one or two units on the job.

589 Needs 9411 on the Alexandria sub Because one of the traction motors (Back) does not work at elevated speeds. CN has been just putting a second engine on to help 9411 instead of repairing 9411