Opening up the Beachburg Sub Mailbag: How busy is Walkley Yard?

One of the things about taking an extended break from blogging is that I am now sifting through quite a number of comments from past posts, some of which are asking questions. I apologize to those that I did not respond to, as I usually try to respond to all comments. Those who have blogged for a long time will tell you, it's quite a challenge to stay on top of comments from posts from years past. I try to scroll through comments on the Blogger platform, but it's not always possible to get to them all in a timely fashion. That was part of the reason for this post. I am hoping to use this as an ongoing feature where I can answer questions from my fellow railfans and try to get an answer for them.

As some readers have pointed out, I am not easy to reach. That is a deliberate decision on my part. I am trying not to draw attention to myself and I certainly don't want to share my information widely online, for privacy reasons. But, if you do have any questions, you can reach me via email at hammond.michael77 AT gmail dot com.

The first two questions I noticed are fairly recent questions concerning Walkley Yard. I have written many posts about this rail yard. To see them, simply type Walkley Yard and Beachburg Sub in google and you'll find them. There are too many of them to link here, so I will invite you to try the google method or DuckDuckGo, which is the anti-google I am now using.

Question from Willow: I have to admit I am coming to this page as a potential homeowner rather than a railfan (though I did enjoy learning the history!)... How noisy is Walkley Yard for the homes nearby?

Answer:  Thanks for your question, Willow. I think you can rest easy. Walkley Yard is pretty quiet most of the time. Much of the time, half the yard is empty. CN has one local train it operates each day. In the morning, they may switch cars around a bit, but for much of the day, you will not see trains coming and going. There is a trucking business there (Rideau Bulk) which is busy at times, but it's nothing to be concerned about, since the setback from nearby homes is pretty wide. As a nearby homeowner, I'm not sure you will notice much of anything. The diesel O-Trains on the Trillium Line have a separate yard where they are maintained, but they too only use the yard to access the Trillium Line and to return back at the end of the evening.

Question from Unknown: I was checking out CN's Walkley Yard on Google maps before they sell it. I found a depressed flat car with an electrical transformer on it as well as an old RDC and a Russell snow plow. Could you do a drive through of Walkley yard showing those. Thank you.

2.  I can share with you this photo that was taken years ago. I do not go out to Walkley Yard anymore. There is a grey area there and I do not want to trespass on private property. Railways are very serious about this and I think it's only responsible that we understand the dangers involved with this industry. There is a gravel road along the yard, which seems to be an informal extension of Albion Road. Rideau Bulk is located on this gravel road and has a municipal address, so you could make a case that the road is fair game. However, I am not sure so I stay away. Here is a shot of that old RDC. It's privately owned and has been in this yard for many years. 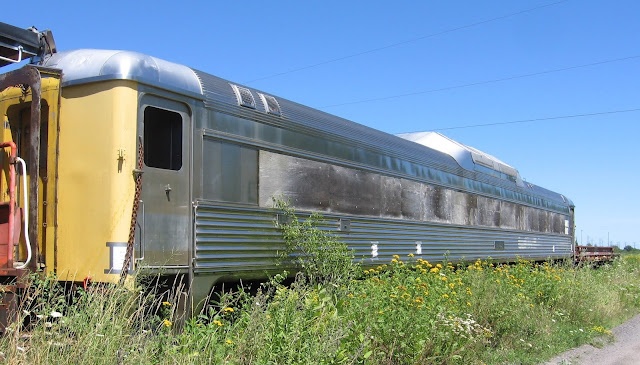 At one point, it was hitched to any old CN caboose. I don't know where these cars are these days, as I have not been out to check out Walkley in several years. 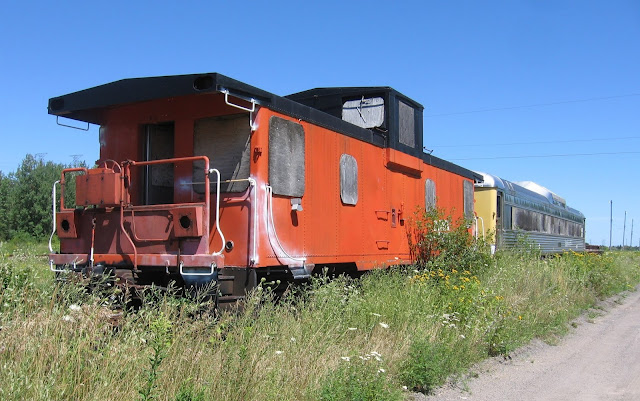 Question from Graydon Johnston: Even though you were mentioning your regret for not seeing much GEXR during your two years here (in Kitchener), bet you're glad you caught at least some action this day as GEXR is a thing of the past in KW now. One quick question though regarding your shot of them pulling into the engine sidings with the single tank car. Do you remember what direction they came in from? From Stratford, the yard? Or did you just drive up by the time they were pulling in? I'm kind of wondering if they had a weekend extra that day to Elmira on the Waterloo Spur? Last known daylight run on the Waterloo Spur to Elmira was a weekend extra on a Sunday in Nov 2016 but that’s the last one we are aware of for the time being.

For more context on this question, here is the post where the question came from.

Answer: All I can tell you is what I found in the information in my digital files. The shots of these engines at the Kitchener station was taken on Sunday, November 5, 2017 at 2:30 p.m. The engines seemed to be coming in from the west, so it's a good bet they were coming from Stratford. As I mentioned in my post, there was a westbound train that was preparing its consist just east of the station when I crossed the tracks again later that day. And I can confirm to you that on Monday, November 6, when my family was returning home, we did see a GEXR train overtop the Conestoga Expressway in Waterloo. I don't have any shots of that meet. Does this mean the train went up to Elmira? I can't say, but I'm guessing not. 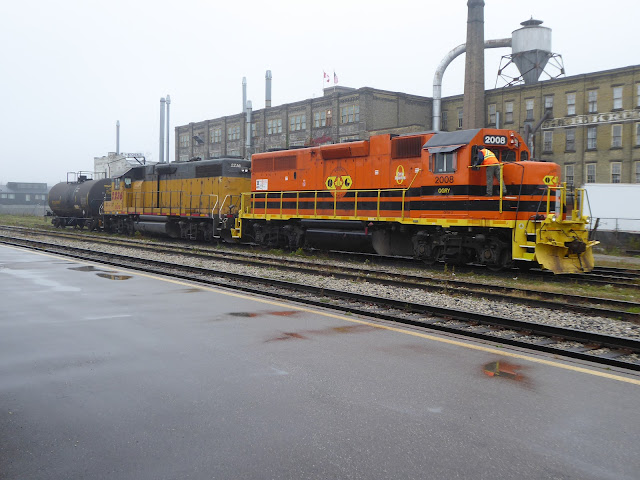