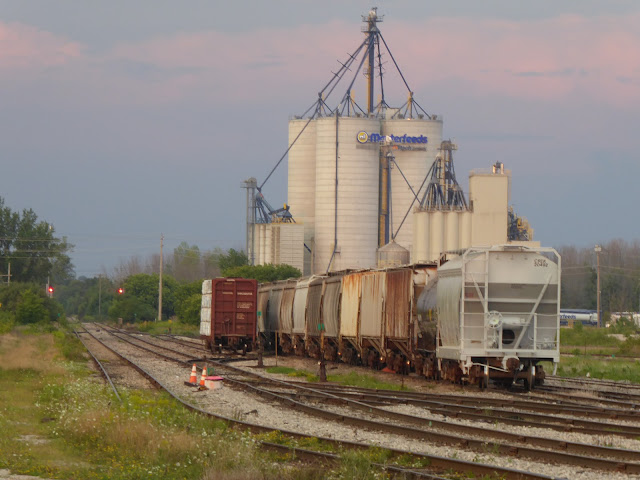 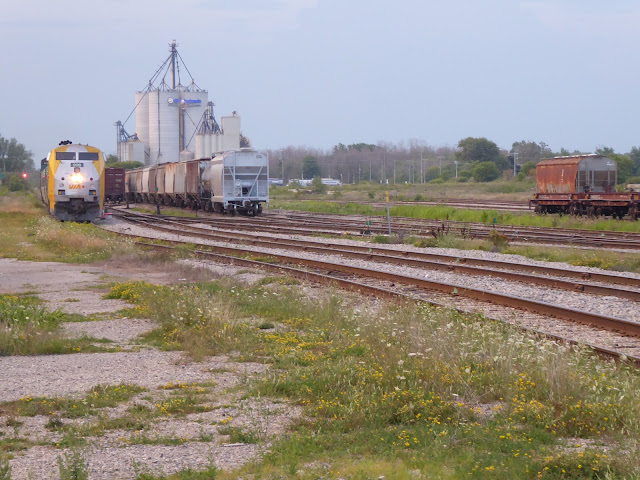 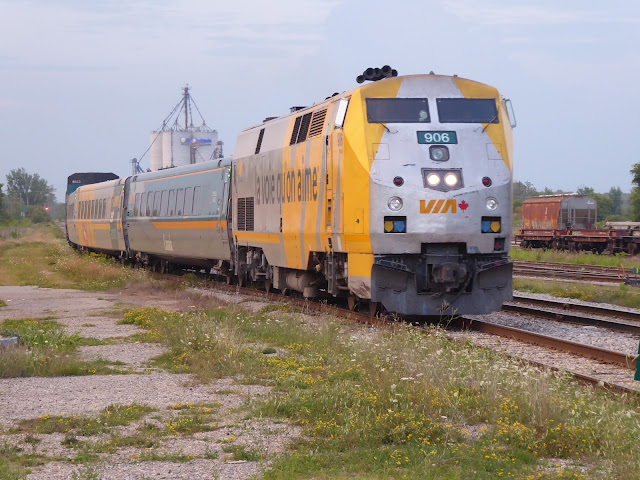 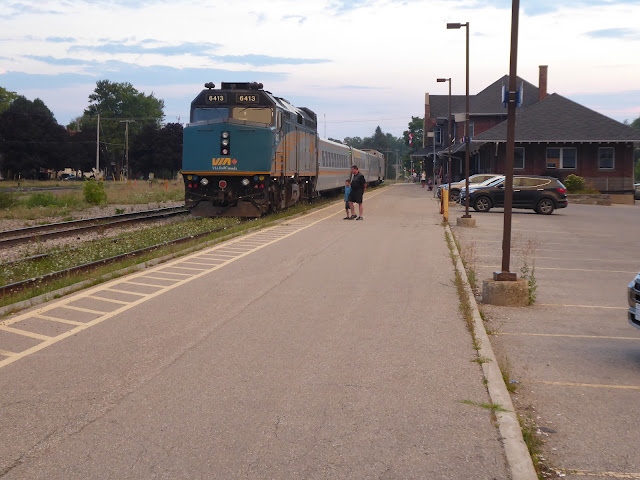 Posted by Michael at Wednesday, September 02, 2020

Long live the wedge shot Michael! Much-maligned but so easy to take. Being interested in recording car and locomotive numbers, I find those more distant/artsy shots difficult for data recordation! Thanks for sharing photos of your visit. Liking those empty coil cars in the yard!

I like both views - the yard with all cars visible, and the closer VIA train with the grain elevator visible over the top. In my opinion they both have their place.

Your observation of those cars reminds me of last week when I visited Gimli, Manitoba. This is at the end of a quiet shortline that really only exists to serve the former Seagrams plant (now Diageo) in Gimli that makes Crown Royal. I was surprised to see a half dozen beat-up grain hoppers parked in the siding in Gimli and made note of them. These little details tell a lot about a railway and its operation.

Thanks, Eric and Steve. I agree with your points that you can't just focus on one type of photograph. I still take plenty of up close wedge shots. However, I find I am just less excited by them these days. Still, it's always good to strike a balance, especially for the purposes of tracking cars, as you mention, Eric.

The next time you are going somewhere on vacation, do tell readers on your blog about it. Had I known you were going to Stratford, I would have loved to tell you where to go and take pictures. I suppose you can also look at old maps of where you are going and look to see what is still there today and what those remnants/structures look like in 2020 and beyond.

When I went to Sarnia a few years ago, I saw them to turn the train in Sarnia and have it facing the right way for its trip to Toronto the next morning. It took quite a while and there was a lot of radio chatter on my scanner between the train engineer and the RTC while they were turning the train around.

I see VIA has added an engine on the tail end of the train in your pictures. Maybe someone finally realized that by doing that, they no longer have to waste time and diesel fuel turning the train around. All they have to do now is pull into the station, drop off the passengers and then reverse into the storage track East of the station. I look forward to seeing your next blog post and seeing if there is another engine on the back of the train to Sarnia, or if it was just a one time thing on the day you were there.

Thanks for the offer, David. I usually do a fair bit of due diligence before I go anywhere. I did get some info about Stratford in advance, which really helped me out. As for Sarnia, since I am from there, I really don't need to do much in advance since I have a pretty good knowledge of operations there. I usually don't publicize my movements in specifics on this blog, for the sake of privacy and security. You know, Big Brother and all! But I usually do reach out on the Eastern Ontario Rails Facebook group to a degree. I do appreciate all the feedback I get from the folks there, including you. Thanks!