Patriotism on the rails

I’ve just finished nearly two years in a marketing role for a government agency and it’s provided me with some interesting insight on branding. Of course, this experience motivated some thoughts about how railways brand themselves. At work, I was put in charge of marketing a certain project, but soon found myself at odds with the decision makers. The reason was they didn’t want to use the actual name of the project we were asked to promote. Instead, they insisted we use a more general word “Modernization” in all of the documents and ads we produced. It made little sense to me that the actual name of what we were promoting took a back seat to the word “modernization,” which seemed overly long and a little bland as a brand name.

Oh well. On to more interesting topics. Here are a few branding insights I have gained in my time in communications and marketing that I think railways should consider.

1. A country is not your brand. I have seen this trend in the last decade or more, where railways wrap themselves in a flag, as a way of promoting themselves to be patriotic companies in it for the good of their country. While I do not have a problem with a company expressing its pride in country, I think several railways have begun to lose brand power because their own name often plays second fiddle to their country. 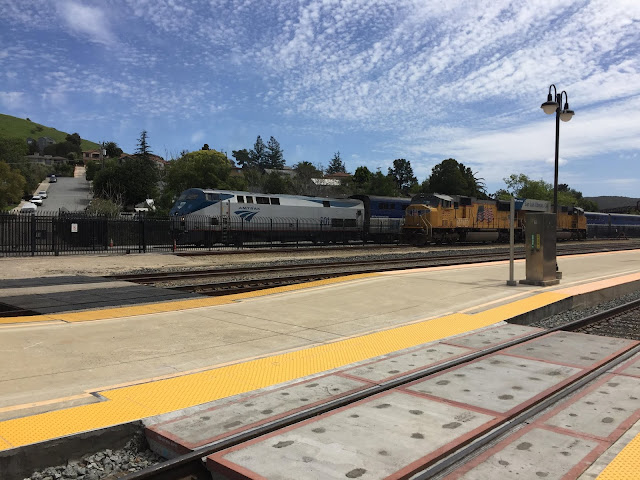 Whose railway is it anyway? Well, to the casual observer, you wouldn't know the yellow engine is a UP engine. Thanks to my brother for grabbing this shot in San Luis Obispo, Calif. recently.

The best example I can find is Union Pacific. My brother recently found himself in San Luis Obispo, where two UP engines were tied up at the station. When he shared his photo with me, I was immediately struck by the prominence of the American flag on the side of the power. I don’t have any problem with UP using patriotism as part of its corporate image, since its roots stretch back into the very founding of the modern west of the United States. The critique I have is that the flag is so prominent, it drowns out the actual company’s identity. That’s a shame because UP has a great, patriotic logo that has stood the test of time. The railway also has an outstanding slogan “Building America” which really does sum up what a railway should be doing on a daily basis. On some locomotives, you see a small UP logo near the rear of the long hood with the company slogan, but it’s the flag that is the dominant image. Given my experience in government in the last years, I think UP’s branding needs more balance.

I’ve noticed Amtrak is beginning to use this flag approach on the sides of its new electric locomotives in the Northeast Corridor. The stakes are much higher for Amtrak than they are for Union Pacific and here’s why.

2. Patriotism has a dark side, too. I don’t want to get into the political divisions in the United States. That’s not my point at all. From a marketing point of view, I think Amtrak, and Via Rail Canada, have a very fine line they need to walk. Why? Well, in Amtrak’s case, it is forever fighting an uphill battle to maintain a good reputation and many of the factors that are working against it are out of the railway’s control. We all know about the battles it faces to maintain proper operating and capital budgets in order to provide service that passengers want to use. This is not always easy when you must go cap in hand to the government for funds each year. That is why wrapping yourself in the flag is dangerous. Passengers often associate Amtrak, and Via Rail Canada, as wards of the state, for better or for worse. And most people do not relate the government with quick, efficient service. I don’t know why Amtrak or Via Rail would want to invite those comparisons.

3. Government branding should be avoided at all costs. This is, in my opinion, a branding challenge Via Rail needs to address. At one point, Via Rail consists did not have any maple leaf flags or Government of Canada wordmark on any of their locomotives or rolling stock. I’m not sure when the flags first began to appear, or the Canada wordmark, but I’ve always found these additions to be visual distractions to what was once a very clean, modern and effective look.

When Via Rail began wrapping its cars for Canada 150 and for the railway’s 4oth anniversary, the Canada wordmark and the by now faded Canada flags were removed. I thought this was a good move. Again, I want to stress that I don’t have a problem with a company expressing its patriotism, but I do think there needs to be a balance. In the case of Via, I found the fluttering Canada flags to be a tad too large and also at odds with the more two-dimensional Via Rail logo. I also found the Canada wordmark to be far too large. The brand is Via Rail, not the Government of Canada. The company’s logo should always be the biggest, most prominent feature. This is why I think Via Rail can learn from its years of wrapping cars. While you might not like this scheme, it at least makes one thing clear: the brand is Via Rail.

Just like I don’t think Amtrak wants to associate itself with the U.S. federal government, I don’t think Via Rail has done itself any favours by associating itself so closely with the Canadian government, especially given the ever-changing political whims of those in power. I don’t know how much of the Canada wordmark placement and size was mandated, but if there was no directive, I think at the very least the wordmark should be minimized and placed elsewhere in the future. Same with the flag. If the flag is bigger than the Via logo, then there’s a branding problem.

Does anyone remember when Via replaced its logo at the bottom of the F40PH-2 hoods and replaced with the wordmark? The railway was then forced to jam their company’s logo above the headlights on the hood. That was a marketing disaster.

One railway operation that has it right is Metrolinx. The GO Train operator does have an Ontario flag on the hoods of its locomotives, but it’s subtle. If you were to plaster a large Ontario flag on the side of the green and white commuter trains, it would create an inconsistent look at the very least. At worst, it could create an unnecessarily visceral reaction. After all, I’m not sure that many in the province are terribly enamored with the provincial government, no matter who is in charge.

I guess my message is simplicity is always the best solution. I’ve read a lot on marketing recently and that message seems to be the central theme to any successful branding exercise or marketing campaign. Railways need to be railways first and foremost. Being patriotic is a good way to create goodwill, but it can’t replace your central message. And that message should always be: We are a darn good railway.

Everything is about 'the brand' now.

Thanks Eric. Two years spent in marketing has opened my eyes and confirmed to me why I was bothered by gaudy flags on the sides of trains. Everything in its rightful place, like my Canada Day flag on the front of my house for Canada Day!