Back to the Future in Hull

I recently transferred to a new workplace across the Ottawa River in Hull. I have begun to explore the old part of the city a bit. Luckily for me, I am located across the street from what is known as the Eddy siding. It’s a stretch of track extending from the Prince of Wales Bridge east through the old section of Hull next to the Ottawa River. Despite the fact that the Canadian Pacific ended its Ottawa operations in 1997, a significant portion of its old trackage remains in place in Hull all the way to the old Eddy plant at the corner of rue Eddy and boulevard Alexandre Taché. 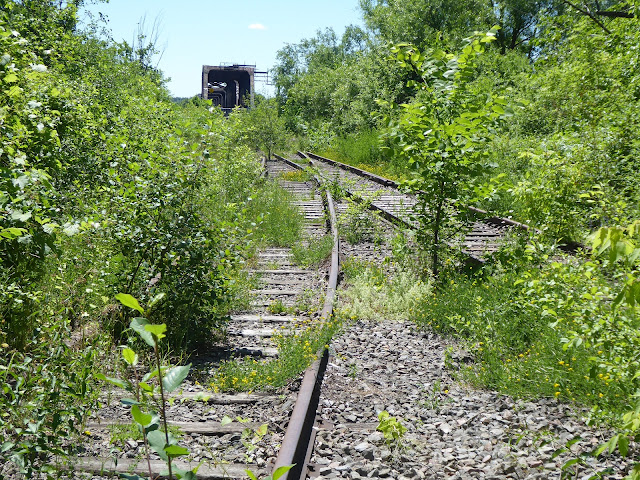 With a little struggling through the bush, you can find your way to a little bluff that overlooks this section of track, where the old Eddy siding branches off from the old Lachute Sub.

Doing a little research on this line, the only reference I could find was to the Eddy siding, although I don’t think this line fits the definition of a siding. In its final days, it was definitely just a spur. The spur veered north from the Prince of Wales Bridge toward downtown Hull. At the western edge of the Eddy property next to Portageurs Park, the spur split into two tracks, one of which made its way between two long Eddy buildings before crossing rue Eddy (just north of the Chaudière crossing over the river) and running alongside the old Domtar facility (next to avenue Laurier). The tracks then made their way beneath the Portage Bridge. The rails have been removed east of rue Eddy for years, although their path is unmistakable.

For those who like to track the traces of rails in Ottawa and Gatineau, this little spur is quite a gem. You can walk along much of its existing length in Portageurs Park along the waterfront. The rails are fenced off near the old Eddy plant, but are exposed closer to the Prince of Wales Bridge. 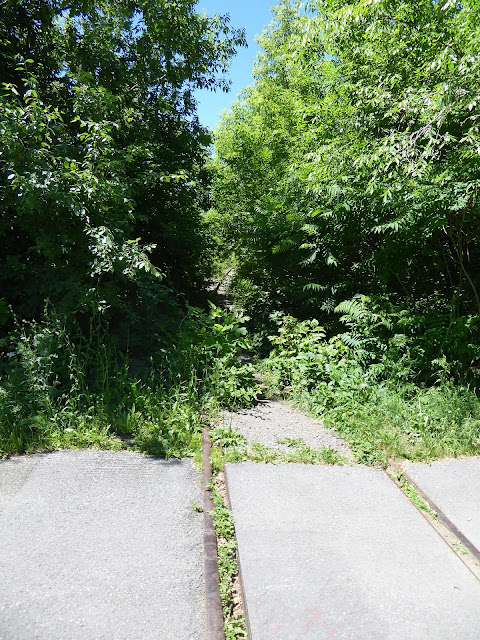 Nature has reclaimed much of the Eddy siding, like this section near Millar Street in Hull (as seen from Portageurs Park

There are a few pieces of interesting reminders of the old railway operation, although I would advise to stay off the tracks. I'm pretty sure the City of Gatineau  owns the Lachute Sub up to Lorrain Boulevard. The city also likely owns the tracks in Hull. Near the Prince of Wales Bridge, there is a fair bit to see legally on public land.

Here’s an old milepost sign near the Lachute Sub tracks (get your zoom ready). 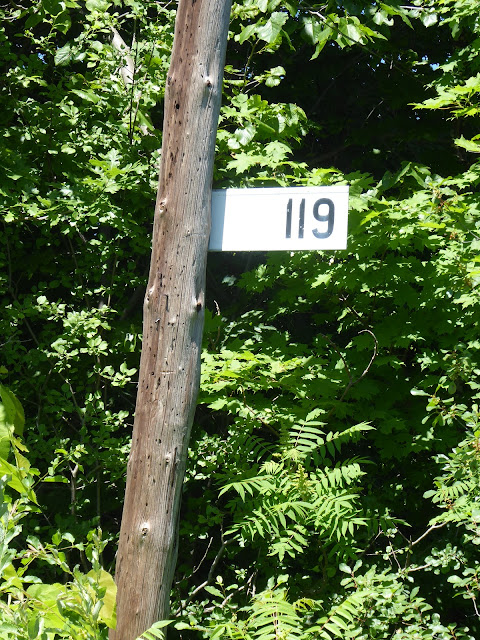 This is an old switch stand that has been left in place. 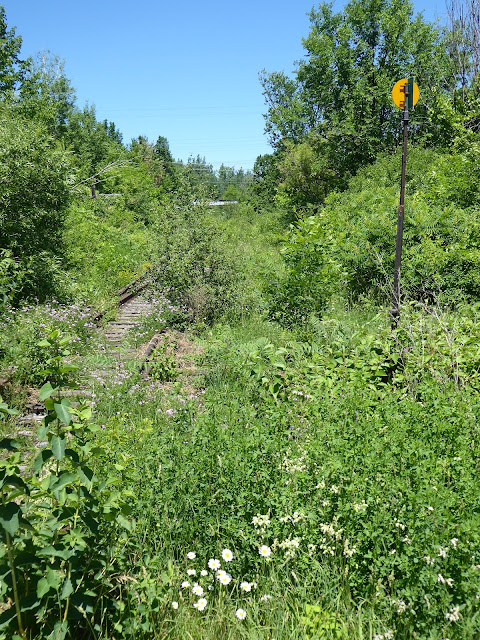 Here’s an old silver box that has been covered over in weeds and graffiti. 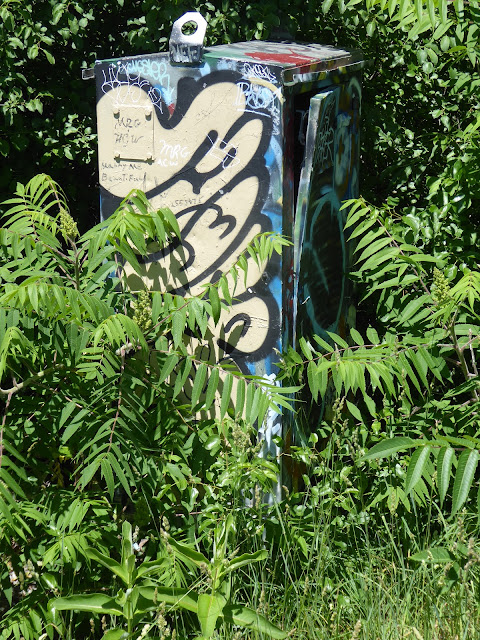 This gives you a glimpse of the bridge that carried the Eddy spur over what is known in English as Brewers Creek. Just west past this bridge, barely visible from boulevard Taché, is another old switch where the Eddy Spur connects with the old Waltham Sub (I think it's the Waltham Sub). Given how long it’s been since the last remnants of the Waltham Sub were dismantled, I was surprised to find this switch still in place. 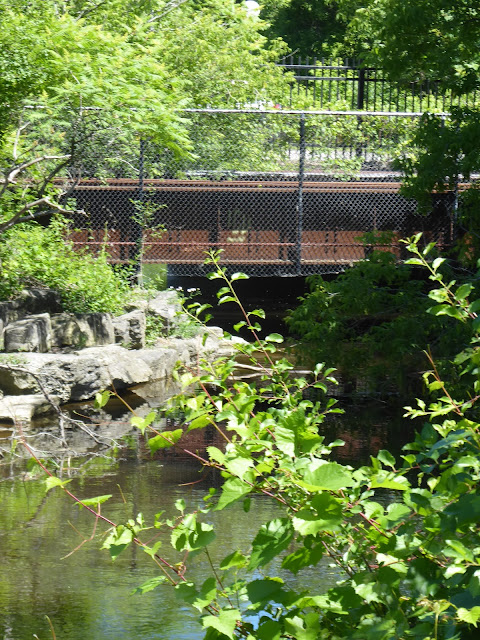 This flyover is accessible from a nearby park. This bridge was where the Lachute Subdivision passed under what I am assuming was the Canadian Pacific Waltham Subdivision. Can you see the Peace Tower on Parliament Hill? 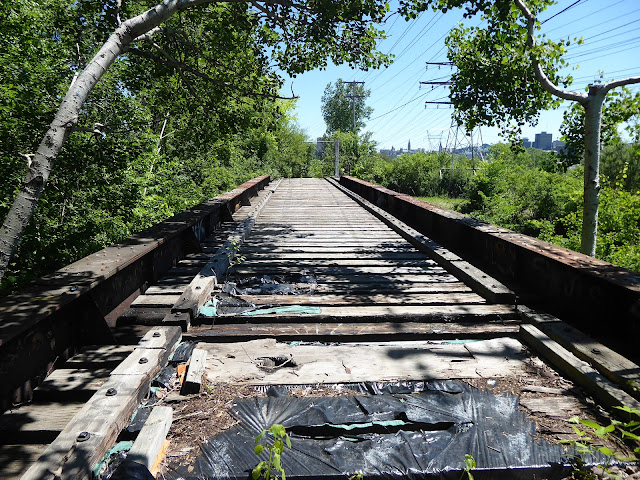 Here's a shot of the old flyover from beneath. 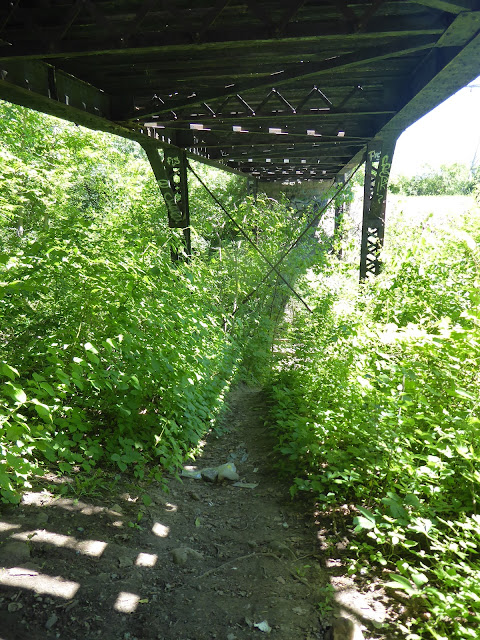 Also, near the Eddy plant, you can see where the tracks have been severed with a yellow bumper still installed. There is an interesting piece of maintenance equipment on the rails, complete with little wheels. I’m not sure what it is or why it’s even on the tracks. 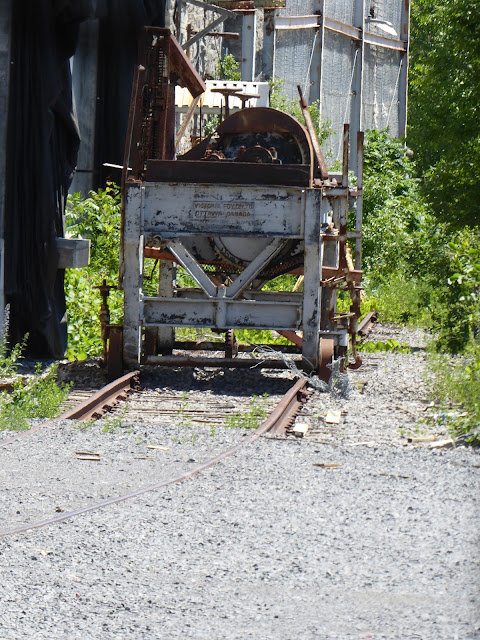 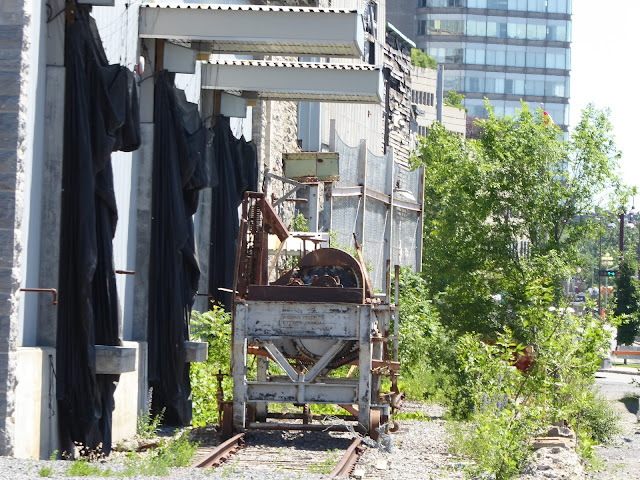 Finding any fairly recent photos of trains on this trackage is not easy online. There may have been some enterprising railfans who took photos of this operation, but I wasn’t able to find anything. Even finding information about the old CP operations in and around Hull is not easy.

In the next little while, I am going to do a little research on the history of the tracks that all once converged in Hull, including the Eddy Spur, the Waltham Sub, the Maniwaki Sub and the Lachute Sub. Given that Gatineau has announced ambitious plans for a light rail line from Aylmer in the city’s west end to old downtown Hull, it seems as though there will be a bit of a railway renaissance in Western Quebec at long last. It’s a shame there is so little existing infrastructure left, but at least the Eddy Spur is still in place, more or less. I would think it has a bright future ahead as a commuter link between Ottawa and Hull.

I think their was actual service into the EB Eddy plant until as recently as 10 years ago. The QGRY would go onto the Prince of Wales Bridge and back into the siding. It definitely lasted into the late 2000's. I remember seeing box cars on the property in 2007 or so.

That recently, eh? Wow. I know CP stopped its service in 1997, because I used to see their trains go by Carleton U. when I studied there. I would have loved to see QGRY action near the bridge.

The aerial imagery from 2007 on geoOttawa happens to show two tank cars parked just outside the property.

When I was working in Hull in the early 2000s I would occasionally luck into seeing the switcher working at the Eddy plant in downtown Hull.

There is a picture out there of the Prince of Wales bridge with an Amtrak train crossing it from late 70s early 80s. I spent a while trying to hunt it down again, but was unable to. From what I can recall it was a test train that was travelling from Montreal to Ottawa via CP tracks on the North side of the river for some government thing.

I've seen a shot of a European light-rail train doing a test run on that bridge and I think there's a shot of a ballast train from the late 1990s or early oughts. Amazing how rare rail photos are in this city!