Sometimes, a single photo of a single railcar is just not worth it to a railfan. However, even if something like a blank sided hopper car or similarly drab tank car doesn't excite you, maybe it's time to think outside the box. Yes, one railcar might not be worth a shot, but what about a shot of a bunch of railcars?

Read Part I and  Part II of the Rolling Stock Appreciation Society posts.

As railfans, we often chase diesel units and focus almost exclusively on the head of the train, but I think there's merit in shooting the middle of the train and the end of the train. Why? Because when taken together, railcars can sometimes tell a story of their own. 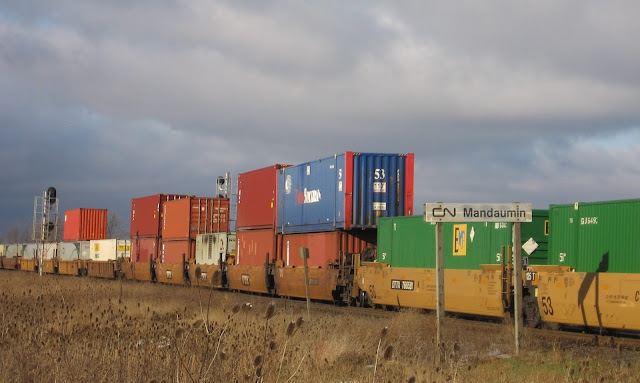 The best example I can think of is a container train. Intermodal trains are commonplace to say the very least and for the most part, aren't terribly exciting to shoot. Well, not so fast. I think when you take the container trains as a whole, they are actually fairly compelling to the eye. This photo above is one of a number of examples of containers trains I have shot. This train was one of my favourite meets. It also tells a story about railroading today. And check out the CN Mandaumin sign. The containers really form a great backdrop for the sign.

You'll never see just one container car on a train like you might with a boxcar, hopper car, flatcar or tank car. Intermodal cars are always part of a unit. These units are huge. They tell you a lot about how railroads operate today. 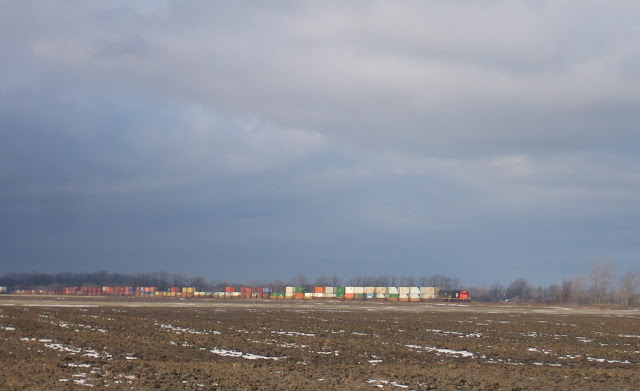 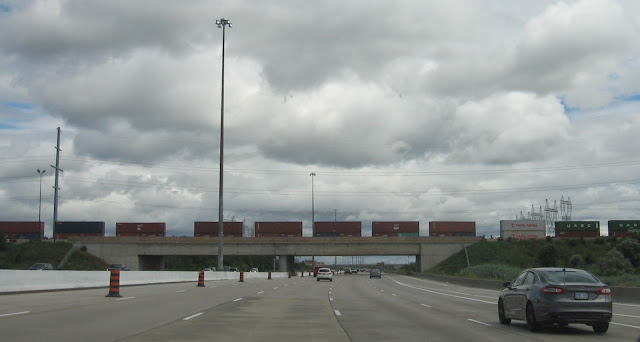 You'll notice in each of these shots that the container cars are framed by an interesting looking sky. This is where I think many railfans could benefit from paying a little more attention to rolling stock. This shot, above, may not have an engine in it, but it gives you an idea of the scale of unit intermodal trains today and it is framed by an interesting backdrop. Sometimes, even a throwaway rolling stock snap can be worthwhile. 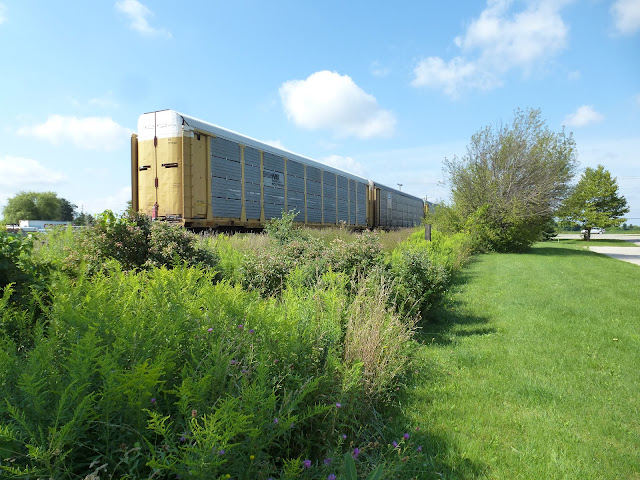 Another example of this is the humble autorack. This car hardly inspires excitement among many of us, I would imagine, but when you take a shot of group, you are telling the story of how cars are moved via rail today. You never see just one autorack on a train. They are always grouped together in large units. This tells you the scale of this source of revenue for railways. I like this shot above for that reason, but also because these autoracks are framed by some cool wildflowers trackside. 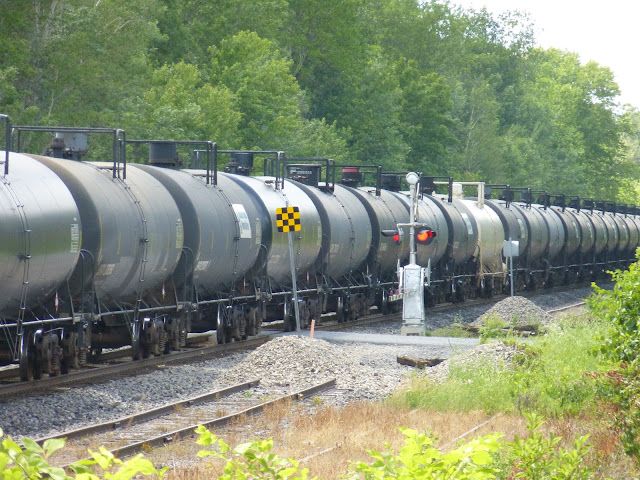 Here's another example of the whole being more than the sum of its parts. I like the lines that this image captures. On the surface, a unit ethanol train isn't terribly exciting, but when I reviewed this shot and looked at the lines this long string of tank cars created, I really liked the shot. The other thing I tried to capture was the anomaly. In this case, there is one white tank car in a sea of black ethanol cars. 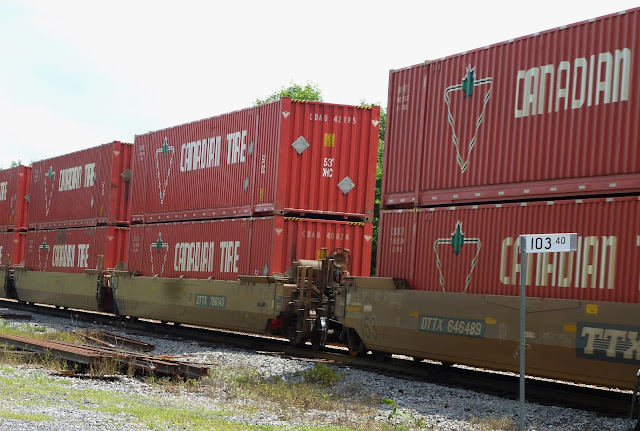 Full disclosure. I don't see a lot of trains, so many of these revelations I have come across about rolling stock are really the product of a dearth of meets. I don't see many trains so I am always taking as many photos as possible when I do see one. I also can admit that I threw many of my old shots of rolling stock away in the 1990s, which in hindsight was a dumb move. I can only imagine if I had those photos today how much more compelling my image collection would be.

Learn from my mistakes. Take a shot of everything. You'll be glad you did.
Posted by Michael at Tuesday, August 15, 2017

These days, with digital cameras, there's no excuse not to photograph everything.

What's too bad is that there's no more caboose, or van, at the end. We (my brother, sister, and I) would wave enthusiastically when the end of the train came by when we were kids (it helped that we lived in Milton, where there was a CP main that passed right through town, and a CN line that skirted around it).

Not to be forgotten either is signalling. I drive on Russell Road in the east end of the city on a regular basis. Nothing excites me more on this stretch of road than seeing a highball!

Thanks for the comments, gents. Steve, good to know that some railways use a single container well car in a consist. I'd like to see that. It seems like such a rarity. Keith, I keep talking about heading out to the east end of the city to catch something. Let's be honest. The real action for any railfan in Ottawa is in the east end. Wish I was in Ottawa this weekend so I could catch the CPR 150 train. What a weekend to be out of town!

When it comes to containers, the Canadian Tire ones are my favourites; the following is why.

When the average person from the public is sitting in their car, seeing normal freight cars means nothing to them. There is nothing they can relate to.

When watching an intermodal train go by, it's nearly the same thing.

Now, when a Canadian Tire container rolls through, the people can have an immediate connection with that container and know what is being shipped. They have most likely been inside a Canadian Tire or at least have seen one. The containers simply belonging to a shipping company are essentially advertising to no one.

Canadian Tire is giving themselves free marketing using their own fleet of containers. It really is genius. The red really pops too.

I never thought of that, but excellent points. It harkens back to the days when boxcars were sometimes branded. The only other retailer that I can think of that has such a highly visible brand aboard the rails is Tropicana. But, you raise the key point that people connect to Canadian Tire when they see those containers. It's a way that not only brands the store, it also humanizes the railway.