As I mentioned in the first summer observations post, a lot is happening in Ottawa this summer, especially on the rail front. However, something that isn't necessarily news is that it has been a cold and rainy summer, for the most part. I have made my way out to Fallowfield Station a few times, mostly to get shots of the Via Canada 150 wraps.

Here's a pretty typical shot from Fallowfield. The skies are grey while P42 920 leads a four-car consist westbound toward the station just past Woodroffe Avenue in mid-July. Under grey skies, of course. You can see a puddle trackside.

As I mentioned in the previous post, work on the the Confederation O-Train line is progressing at quite the pace at the moment as the Rideau Transit Group tries to get the system operational for next year. The east end of the line seems to be farther along than the western end. I have seen a fair number of hi-rail vehicles on the rails, but I have never seen the maintenance of way equipment. Here's a shot of some of the "rolling stock" along the line, although I think the British term "wagon" is a little more appropriate. 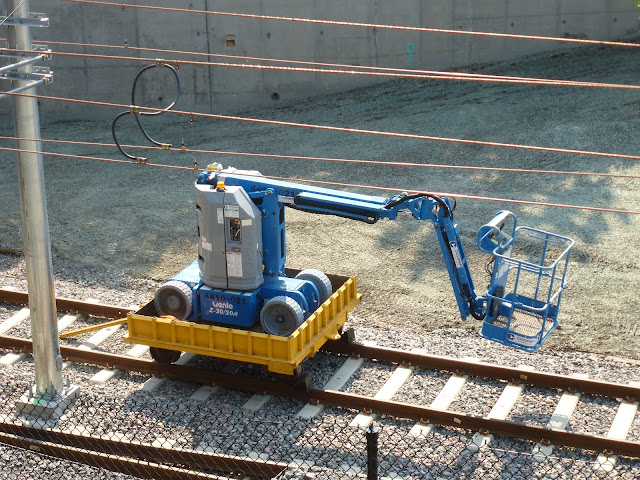 This shot was taken near the central Via station. I didn't know what to think when I saw this piece of equipment. It's an interesting site, to be sure.

At Bayview Station, work of the new transit station is progressing well. Here's a shot of the new light rail station. This is the station that is sitting atop the old Canadian Pacific trackage that leads up to the Prince of Wales Bridge. 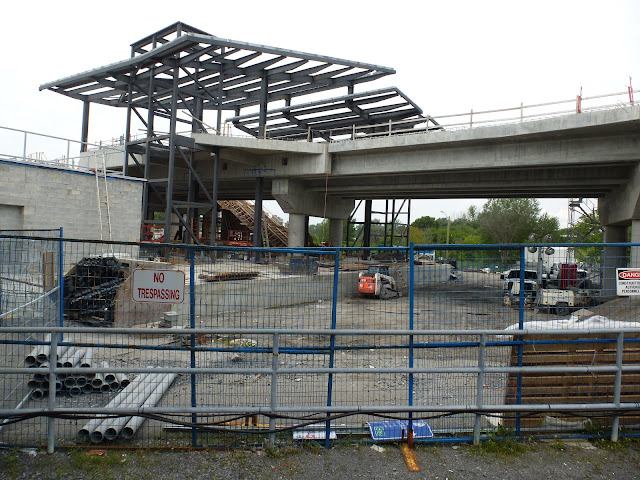 As you may recall, the group looking to establish a privately-run commuter service between Ottawa and several outlying towns in Eastern Ontario and Western Quebec has taken the city to task for not maintaining the old CP track. In a complaint filed with federal authorities, the Moose Consortium argued that the city has an obligation to maintain the track it owns that leads to the bridge. The city has responded by saying it has not abandoned the line. The city, in fact, has recently begun working with the City of Gatineau on working toward establishing O-Train service over the bridge. I don't know how this will happen, since the old CP Ellwood trackage is not only disconnected to the O-Train Trillium Line (the track is buried in ballast near the Trillium Line, as I pointed out in this post), but another section is now buried beneath the new LRT station.

I wonder how the city plans to establish a connection to Gatineau when it seems like there is no plan in place at Bayview to retrofit the facilities to accommodate a new connection to the bridge. 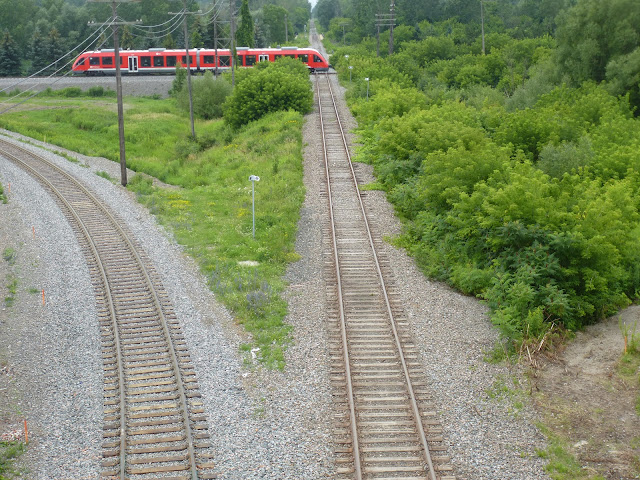 I will get back to the Moose Consortium in a minute, but wanted to touch on Walkley Diamond. In the past few weeks and months, some readers have alerted me to some work being done to the diamond as well as the tracks leading up to the Trillium Line. The end result is that much of the trackage on the diamond appears to have been upgraded. The ballast is new and the ties look to be new as well. You will recall from this post that this work was started in the spring. The shot above shows one of the Alstom Coradia LINT O-Train diesel trainsets heading south toward Greenboro Station at the diamond. 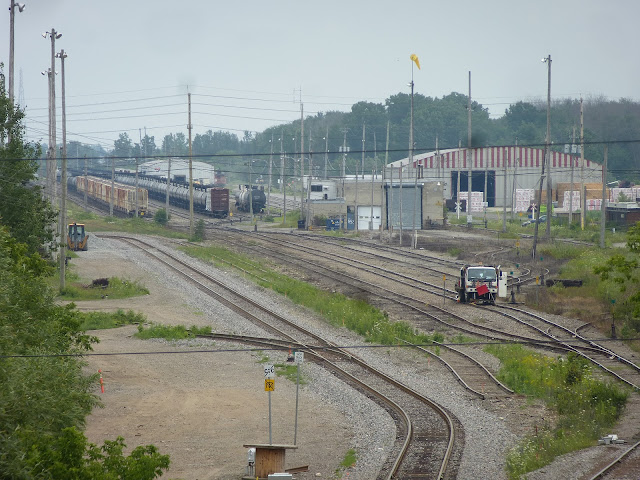 This shot above shows the new O-Train connection (at left of photo) between Walkley Yard and the Trillium Line. You can see the disconnected track immediately to the right of the new O-Train connection. Further to the right, some more work is ongoing in the CN portion of the yard as some track inspection takes place near a switch. In the background, you can see a long string of covered hoppers and tank cars, along with one lumber car hitched to the tank cars.

So, that leaves us with Moose. The group recently made its pitch to regional municipalities about establishing a GO Train style of regional commuter service between Ottawa and communities outside the city. 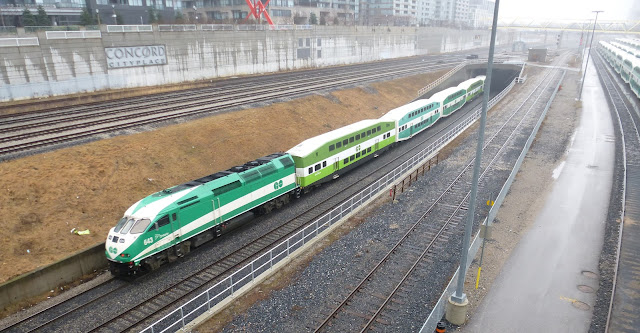 Does this mean we are likely to see trains like this one, above, in the National Capital Region soon? I have to admit I have my doubts. I give the group credit for its forward-thinking vision and ambition, but I can't see how it will overcome the massive hurdles it now faces.

Let's start simply. The group of 12 businesses backing this plan wants to establish a 400-km network along existing rails and recently abandoned rights-of-way. The commuter service would link Ottawa with Arnprior, Smiths Falls and Alexandria in Ontario. On the Quebec side, the service would link the urban area with Bristol, Wakefield and Montebello.

The railway is banking on the development opportunities along its network as a way to fund its operations. The premise is simple. Development usually happens along railway lines, so the Moose Consortium is expecting to collect a share of development money once development occurs along its line. The group also plans to allow private concerns to build the railway stations along the network. Finally, Moose plans to collect fees from municipalities that would benefit from this commuter service. Essentially, they would subscribe to the commuter service.

It's an interesting concept, particularly since it is aiming to be a privately funded venture.

Here are the issues, as I see them.

1. Linking any community along the old Beachburg Subdivison northwest of Nepean Junction would require a new rail line to be built. The group has pinpointed this old right-of-way as part of its network in several graphics.

2. Linking to Arnprior would require some significant upgrades to the Renfrew Spur in order to accommodate passenger trains operating at higher speeds than CN's weekly 589 Arnprior turn.

3. Linking to Wakefield will require saving the old Canadian Pacific Maniwaki Sub, which has been inoperable for years. The municipalities along this line recently decided it was better to pull up the rails than to invest in repairing damage from floods. This line has only hosted the Hull-Chelsea-Wakefield Train in the last few decades. At the very least, it needs significant work, if it is saved at all.

4. Linking to Alexandria and Smiths Falls would require trackage rights from CN and Via. This is not a huge hurdle, but I would imagine it would be tougher to get schedules to fit on the Via Smiths Falls Sub, given the frequency of Via Rail corridor trains on this line. Similarly, I see similar issues on the Alexandria Sub, given the frequency of Via service between Ottawa and Montreal.

5. The group does not appear to be interested in charging commuters a set rate for riding its commuter trains. Instead, the operations would be covered by the subscribing municipalities. I have a hard time believing a commuter service could be viable with no reliable commuter fares.

Those are just my concerns, but I do hope this group can make a go of this plan, since regional rail service appears to be a big need in and around Ottawa. I just hope some of these hurdles can be overcome. It makes for interesting blog fodder, at least. I'd be interested in what other railfans think of this plan.

Personally I love the Moose Consortium plan. Aside from being forward thinking (and sad that it takes private industry to do what the province should have set up 10 years ago), it is a plan that will actually reduce commuter traffic in Ottawa. I don't care what Jimmy spouts, the current LRT plans aren't taking anymore cars off the road than the current buses are - and even there, people like myself likely switch back to driving in to avoid delays or complications from switching over the transit way to streetcars.
Anyway I have long felt heavy rail similar to the GO should be in Ottawa and should have been here long ago on account of the way this region developed and how existing tracking was set up. I'll go as far as saying that if the Moose group is successful, I would seriously consider and likely sell my house and move outside of the city to a location near to where they will be servicing (most likely the Arnprior area) and would greatly enjoy the benefit of proper heavy rail transit services. To be blunt, the fact that there are any large hurdles to jump over for this group is a sad testament to what is the state of transportation in this city, the ignorance of the province (especially compared to Toronto) and the lack of will and vision this city has. Heavy rail to the outskirts is simply a no brainer.

All great points, AJ. I think a lack of vision and common sense is the biggest obstacle to Moose. City politicians are so fixated on their own vision, they can't see the common sense to what Moose is offering. However, I think the Moose plan is doomed. Who is going to pay for rails to be put back on the old Beachburg Sub north of Nepean Junction? Who is going to save the old Maniwaki Sub? These are both lines that Moose wants to use.