On occasion, I like to go through my old photos to see if there are some interesting shots I have not used in past posts that might be of use now. With that in mind, I present my latest odds and ends installment. You can read my past post of odds and ends here.

This first shot is a rare one for me, as P42 910 is hitched in front of a disabled F40PH-2. I don't often see two locomotives on the head end of a four-car corridor train, but I snagged this one last summer at the McKenna Casey crossing. I only once ever saw something like this and it was at Via's Central Station. You can see that picture in this post. 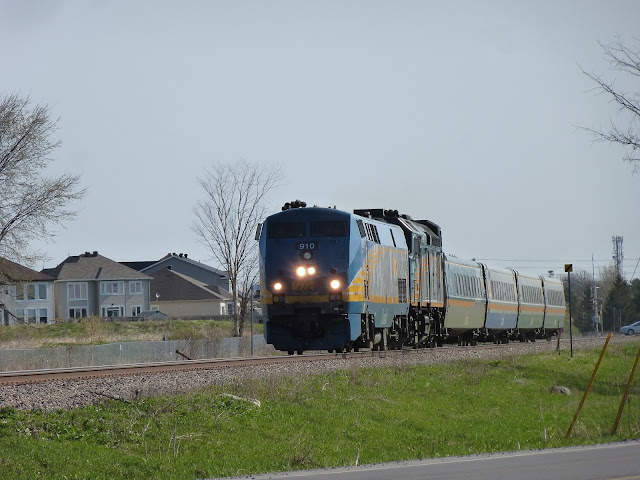 ﻿
This is an early shot taken in the summer of 2013 from the access road right next to Walkley Yard. I haven't seen many side dumping gondolas around the yard, but on the rare occasions that I have been near the yard, I have caught a few interesting pieces of rolling stock like this one. This car appears to need a new stenciling as its numbers are fading. 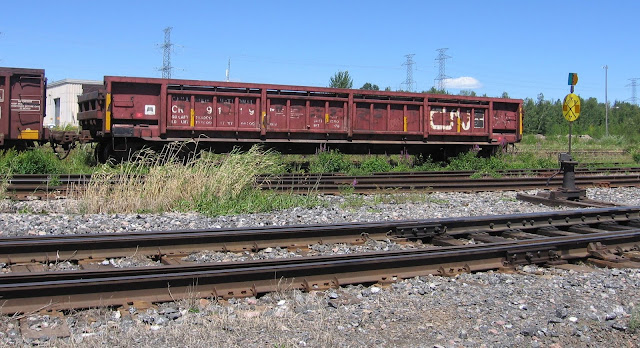 Here's a shot from last October in Sarnia of a yard switcher and slug idling before the day's work begins around the yard. This shot, taken from the platform of the Sarnia Via Rail station shows a typical early morning scene in Sarnia, with some harsh morning light and dark shadows. I liked this shot because it gives you an idea of the scale of Sarnia's petrochemical refineries, clearly visible in the background. You can also see a few old GM-EMD SW switchers in the background, which are likely being used for parts at the Lambton Diesel operation at the old Sarnia CN roundhouse. 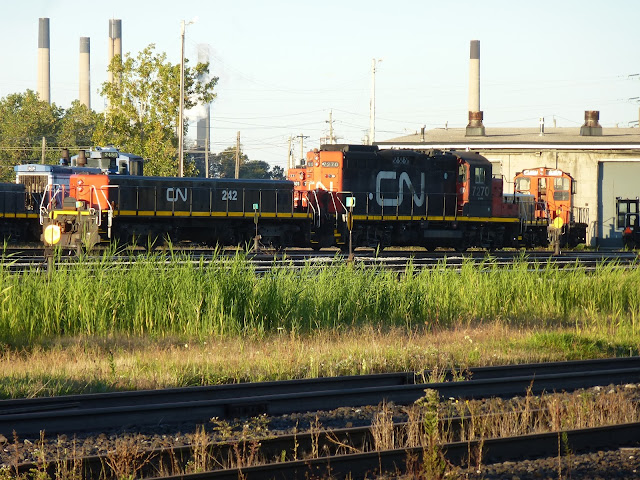 This shot was taken in July 2014 at the SynAgri feed mill in Twin Elm. I love to drive by this mill because you can often find interesting covered hoppers here that you wouldn't otherwise see in the Ottawa area. You may recall that last fall, I caught some Potash cars sitting on the mill's spur. This hopper, below, is special since it is an old Soo Line hopper, complete with its original SOO lettering and patch. Of course, CP has been using SOO lettering for years, so it's not all that significant but I still was happy to see it. This shot also gives you a good idea of the construction of the old mill, with plywood covering the annex near the Smiths Falls Sub. This shot could have been taken at any time. I think that's what I like about it more than anything. There's a timeless quality to this spot. 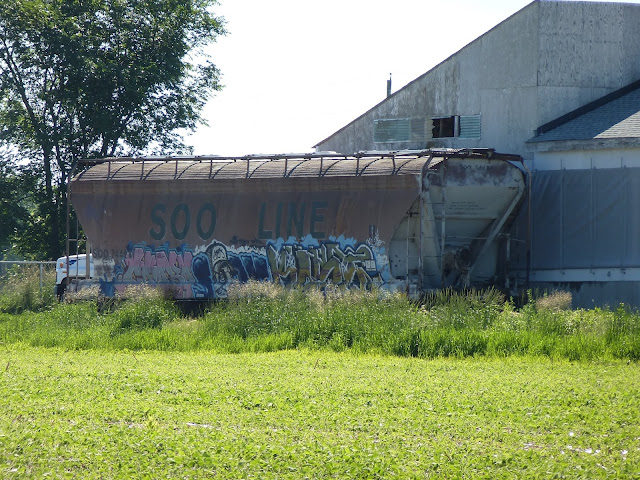 This final shot, taken in 2013, made me laugh a bit since I know I deliberately included the CSX MoW truck in the shot. Why? Look at the slogan on the hood. I don't know when CSX last used the "Quality in Motion" slogan but I know it was in the 1990s at the latest. I remember seeing those trucks around my hometown in the 90s. That means the railway has not bothered to get any new MoW trucks in quite some time, at least for the Sarnia Subdivision. To me this suggests one of two things. Either these trucks are incredibly durable or the railway doesn't seem to see this line as a top priority. I think it's probably a mixture of both. Those pipes and facilities in the background make up part of the Imperial Oil refinery in Sarnia. 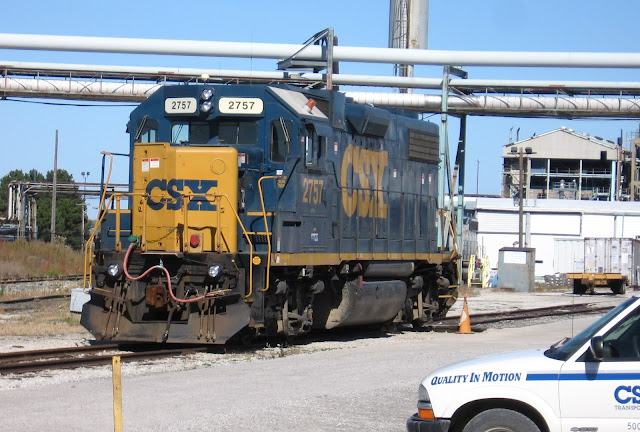 So those are some bits of buried treasure in my photos. It's always fun to revisit older shots and see new elements that I had not noticed the first time around.

Nice collection of odds-and-sods! That side dump gondola is one of the Branchline Rehabilitation MOW cars paid for by the federal government to refurbish prairie branch lines. They get around, still!

I caught (not on camera though as I was driving) a pair of F40PH-2's about 5:00 yesterday afternoon heading westbound at Carlsbad Springs with a 3 car consist. I assume the second unit was dead.

You need to get out to that stretch of the Alexandria Sub sometime. It's a great stretch for railfanning. I have seen several CN freights this summer as well. If my timing was better, I'd pull over to get a shot or two.

Thanks for your comments, gents. I know I should be looking to the east end of Ottawa for freights, but the schedule just won't allow it right now. Soon, hopefully! Keith -- if you have any tips on good times in the east end, that would be appreciated.