Something is happening on the Beachburg Subdivision

To borrow a line from Monty Python, and now for something completely different. One of my fellow rail watchers in Ottawa Michael Watson caught this consist on CN 589 as it headed out to Arnprior last Wednesday. He made sure to set up for the train's return later that Wednesday to catch a most unusual site. For some reason, the Arnpior local had two centrebeam flat cars loaded with lumber, on its way back to Walkley Yard. The shot below shows 589 heading east along the Beachburg Sub near Greenbank Road. Can you spot the old dismantled track in the foreground of the shot? 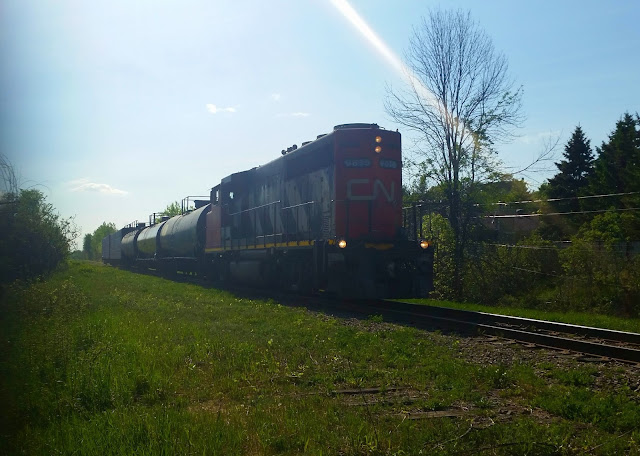 Michael's catch raises some exciting possibilities for us railfans in the area. As I mentioned in this post, CN and the city have invested in improvements at the Corkstown Road crossing on the Beachburg Sub. I speculated at the time over what the investment could mean, since it made little sense to me why the railway would invest in a crossing on such a lightly used rail line.

The first thing I'm struck by is that the train is carrying lumber back from somewhere in the city's west end. If the train had been carrying lumber to a customer on the line, that would make the most sense to me. Is there a new customer on this rail line that is shipping product from a facility in the west end? Was this load of lumber a one-off shipment? Is there another explanation that I'm missing? Surely someone more knowledgeable than me might have a more reasonable explanation. I would point out, again, that Nylene Canada, the company that operates the Renfrew Spur and receives rail service once a week, has mused in the local media about making better use of this rail line. Could it be that someone has attracted more rail business to the old Renfrew Spur?

Here's another shot Michael caught with the two lumber cars at the end of the Arnpior local near Greenbank Road. A five-car consist is the longest I've seen on this train since I've been trying to catch it. 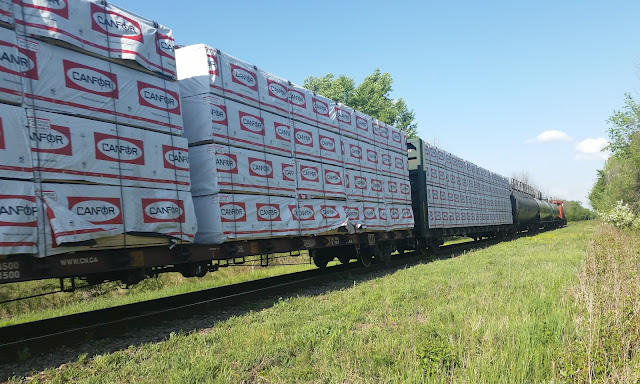 Here's a final shot of 589 headed toward Walkley. I tried to catch up with the local this past week, but it remains elusive. Michael did mention to me that the train seems to have a six-hour turnaround time, in his experience. In his case, he used this rule of thumb to catch the train in the evening after seeing it in the morning. I'm hopeful I can use this tip one Wednesday soon. 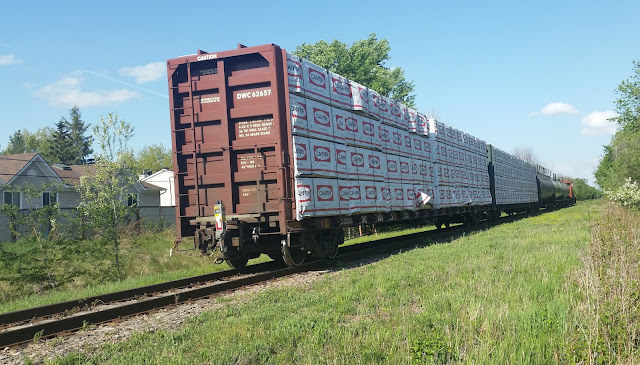 I am not an expert on the Renfrew Spur, since I have only seen portions of the line through Carp a few times. My final question is, did this local pick up this lumber on the line somewhere? I mention Carp because I know there is a siding there where track maintenance equipment is parked. I am hard pressed to think of other parts of the line where there might be nearby industry and sidings, which would necessitate any loading operation. I also wonder if there is possibility to ship lumber from Nylene Canada. That would make sense for CN, since they spend a few hours at Nylene each Wednesday unloading their tank cars.

Whether this was a one-off or a sign of things to come, I'm thankful to Michael Watson for catching this and generously sharing his shots and observations with us.

My three guesses as to where the cars could be going are:
1. Industry near Carp (to the east of Carp road)
2. Industrial complex in Arnprior (past the siding where the switch the engine around), I think the track still goes out there
3. Kott Lumber on Moodie drive

My bet is on #3, they may have just put the cars on and were going to do the drop off on the way back.

As for the track maintenance, I've seen that they have many bundles of ties on throughout Nepean for quite a while now.

I might bring some insight on these cars..
I work out in the east end and as I was driving a week or two ago I saw these very same looking cars with the white rapped wood on a train under the Hawthorne rd bridge. The cars weren't moving, but when I drove passed again from a trip they were gone. Not sure if they came east from Montreal area.

On a side note I was lucky to see a train moving one Saturday ago hauling a mixed consist headed under the Walkley rd bridge. I didn't know there was a distribution plant on sheffield rd that CN supplies to. The name's Kemira of the company there. I see there water trucks come out of there all the time.

I saw a similar train at Fallowfield Station on May 4th

Well, if this consist was at Fallowfield, there's a good chance that CN is combining its local service in the west end of the city, which makes sense. It does make me wonder, though, why the railway would lug those cars all the way out to Arnprior and back, just to switch off Beachburg and onto the Smiths Falls Sub to deliver them to Kott, if that is what is happening. Thanks for your help, everyone.

Just to clarify the train I saw was headed towards Kott Lumber around 10am that morning. I messed up the upload the images are in the wrong order

I would suggest anyone interested check out C.Flat's photo of 589 at Fallowfield Station, which proves DaveM's point that the Wednesday run out to Arnprior appears to be combined now with 589's run out to Kott Lumber, which used to happen on a Tuesday or Thursday (trying to remember without consulting my notes).

And just this Tuesday around 9am I spotted a single carload of wood being hauled out to Kott.

The last time I saw the run out to Kott Lumber, it was on Saturday mornings ( http://tinyurl.com/h26yyau ), but that was last year. I don't know which day it is running out there anymore.

On GeoOttawa I could see that there used to be some kind of business where this photo was taken. Just interested in seeing if anyone knows what that business used to be. Thanks, Brandon

I stumbled across what appears to be CN 589 quite by accident this morning. I was driving south bound on Moodie Drive when it popped out of the woods just as I arrived at the underpass for the Beachburg Sub. I stopped on Timm to get a picture. It's not great but at least it proves I saw something. I can't make out the locomotive number. It's in the 9000 series, so a GP-38W. What really surprised me was that the train went by on a Friday. From what I read here, I thought that it only passed on Wednesdays.