Thomas Edison on the rails

Thomas Edison was a railway man. Really. After a chance encounter with an old rail car this summer, I searched out the legend of the famous inventor and his connection to railways. This is what I discovered.

Across the St. Clair River in Port Huron, Michigan, Thomas Edison remains an immense source of civic pride. Although born in Ohio, Edison spent a great deal of his childhood in Port Huron, where his journey toward world fame began on the rails.

Let's back up a bit. The photo you see below is a restored 1800s baggage and passenger car, once belonging to a railroad with quite possibly the longest name in rail history. Care to guess what the C.D. & C.G.T. Jct. R.R. stands for? No googling, please. The initials stand for the Chicago, Detroit & Canada Grand Trunk Junction Rail Road. The line was built in 1858-9 to link Port Huron to Detroit and the rest of the outside world. As the GT suggests, this line was part of the Grand Trunk Western system, although the line was technically independent until 1928 when it officially became a subsidiary of the Grand Trunk. The Grand Trunk continues to operate in Port Huron, including on waterfront trackage that goes past this old rail car and its old rail station (you can the station and the crossing signal in the photo). 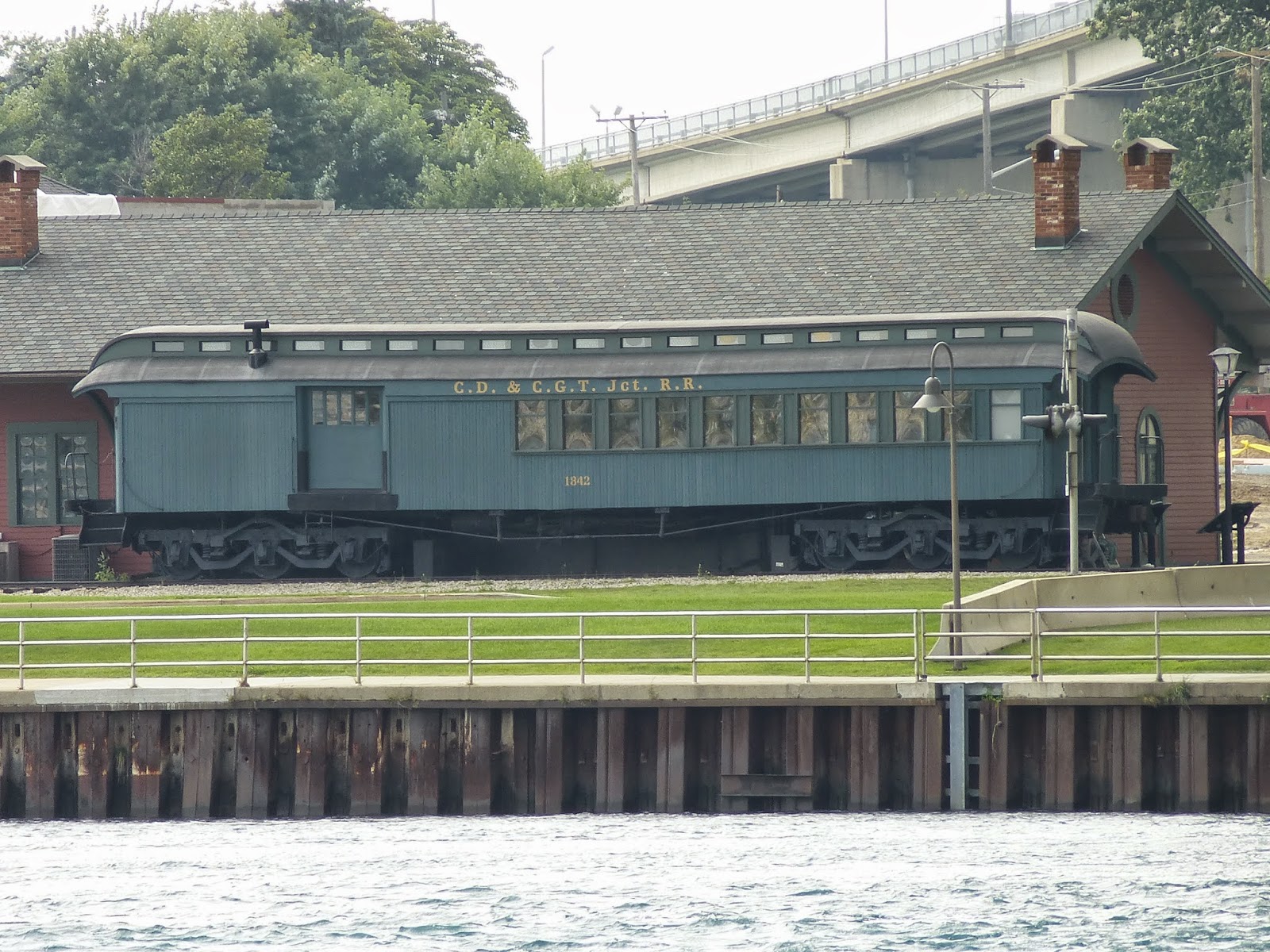 August 2014 photo of restored baggage and passenger car at Thomas Edison Depot Museum in Port Huron, Michigan. The museum is located along the St. Clair River waterfront, right next to the Bluewater Bridge (seen behind the station).
Back to Edison. The young inventor was a restless young man, even as far back as his pre-teen years. He was twelve years old when he convinced his parents to allow him to ride the train to and from Detroit each day in order to sell newspapers and candy to passengers. He was soon successful enough that he hired other boys to work as newsboys on the same line. One of the results of this venture was that Edison obtained the exclusive rights to sell his own newspaper, the Grand Trunk Herald, along the line.
The profits Edison reaped from his railway sales helped fund his early experiments. A few versions of a local legend suggest that Edison's hearing problems stemmed from a failed science experiment on a train. He once suggested a conductor hit him over his ears and threw him off the train after one of his experiments went awry. That story changed over the years.
There is even a Canadian connection to Edison's railway adventures. After his time selling papers and candy on the rails, Edison would go on to become a telegraph operator for the Grand Trunk in Stratford, Ontario. The story about this job holds that Edison saved a young boy from being struck by a train. The boy's father, a Grand Trunk employee, was so grateful to Edison that he trained him to be a telegraph operator. 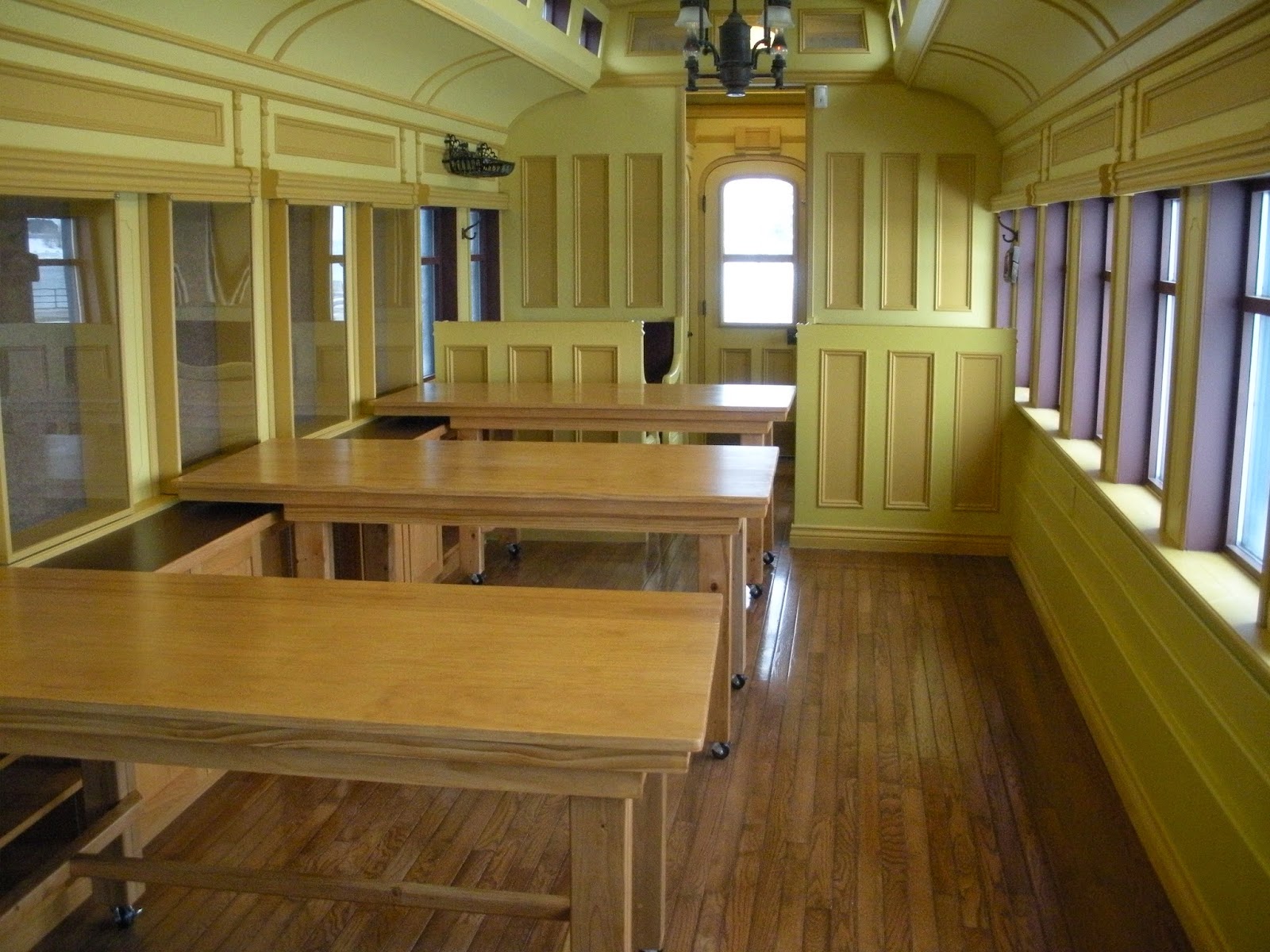 Photo from Port Huron Museum
Of course, there is so much more to the Edison story, but for our purposes here, I will stop there. Port Huron continues to pay tribute to the man. The restored 1800s rail car and train station comprise what is known as the Thomas Edison Depot Museum, which is perched beneath the Bluewater Bridge, linking Port Huron to Point Edward and Sarnia Ontario. The rail car has been restored, but many of its original furnishings inside the car have been replaced by what you see above. Look online and you will notice many complaints about this. The city also has a waterfront hotel, The Thomas Edison Inn, not far from the museum.
Information on the car was very hard to come by. Most references to it suggest it was an 1800s vintage car, but little else is out there, from what I can see.
ANOTHER CLOSE CALL IN BARRHAVEN
Via Rail Canada was busy reassuring residents in the Barrhaven neighbourhood that there are no public safety issues after the warning signals at two level crossings at Jockvale Road and Greenbank Road both malfunctioned earlier this week, resulting in the signals going into fail-safe mode. Via Rail said the problem was due to a mechanical malfunction, which has been fixed. 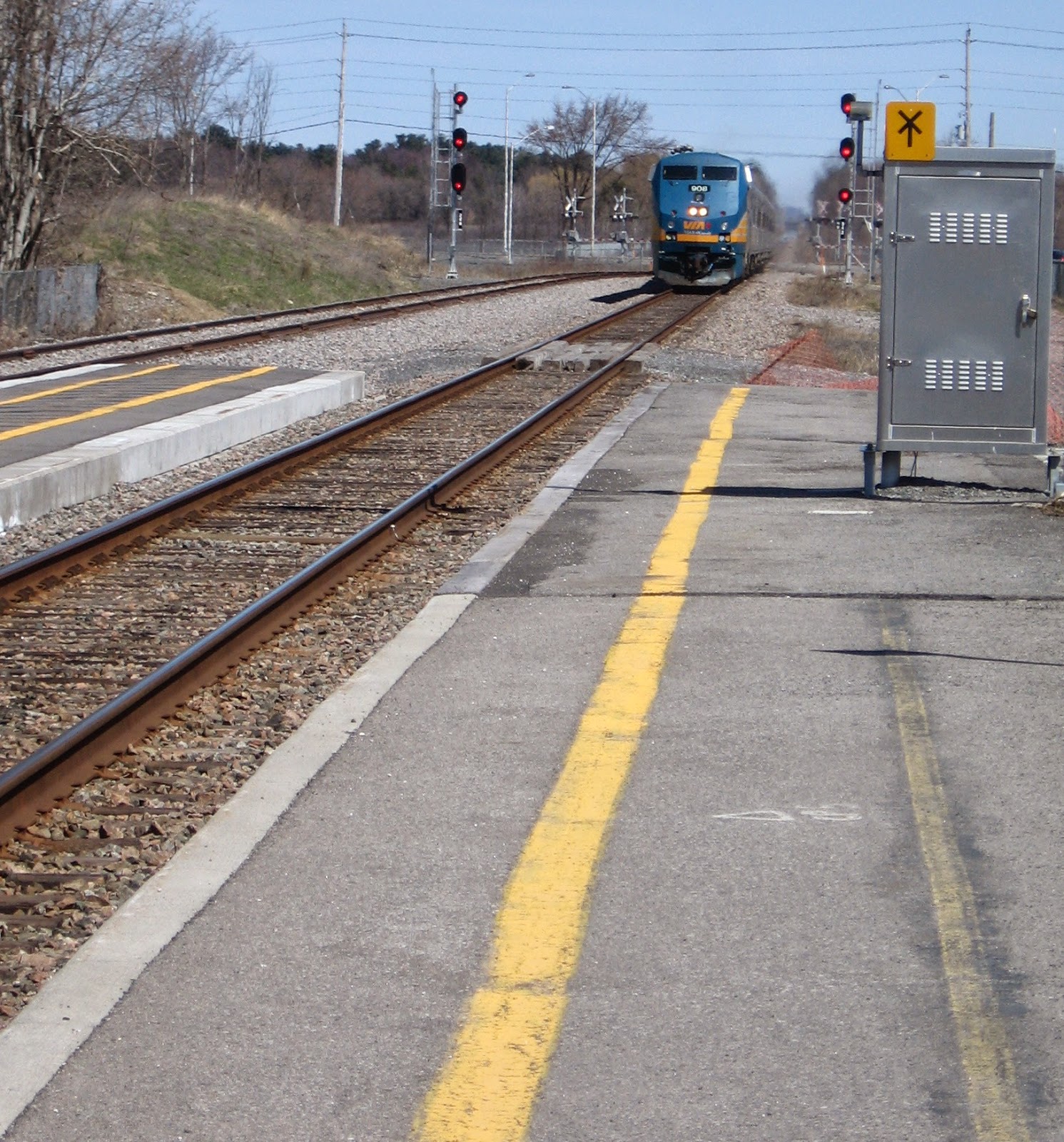 On Thursday morning, an OC Transpo double decker bus stopped beneath the crossing guards at the Fallowfield Road level crossing, in the midst of the morning rush hour. Although commuters on the bus told local news they were frightened by the fact that the bus was about five metres away from the train, the city transit authority insisted that the bus driver did the proper thing by stopping for a yellow light, even though the bus was sitting in the path of the crossing guards. The incident, of course, will likely raise new questions over the safety of these crossings, especially after the fatal bus-train collision at the Woodroffe Avenue crossing last fall.
﻿
Posted by Michael at Friday, November 07, 2014