Last glimpses of the Beachburg Subdivision

When I first started this blog in April of 2013, I knew it was a risk calling it the Beachburg Sub. Even then, the dormant CN subdivision was in danger of being lost. These past few weeks, this blog's namesake rail line has been torn up by the Canadian National, despite various efforts to revive the line with a shortline operator. Last week, I headed deep into Ottawa's rural northwest countryside, to pay my last respects to this line.

As of Saturday, Nov. 16, the line has been torn up all the way to the Dunrobin area, although rails are still in place into Kanata. The work train was loaded on that day and shipped out. A reader told me that the work crew is then given a six-day rest before resuming its work. That would mean work will resume on the 21st or 22nd.

Below is a shot of the Beachburg Sub at Stonecrest Road Ottawa, Nov. 9, 2014 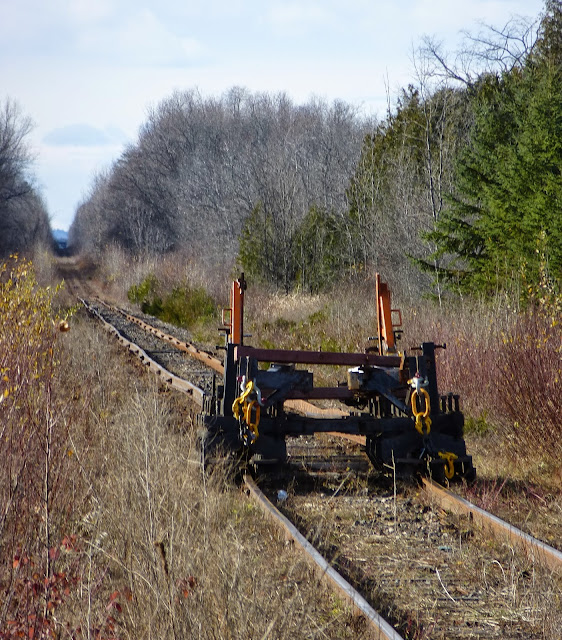 Here's the same stretch on Nov. 11. The bolted rail will be picked up later by truck, I assume 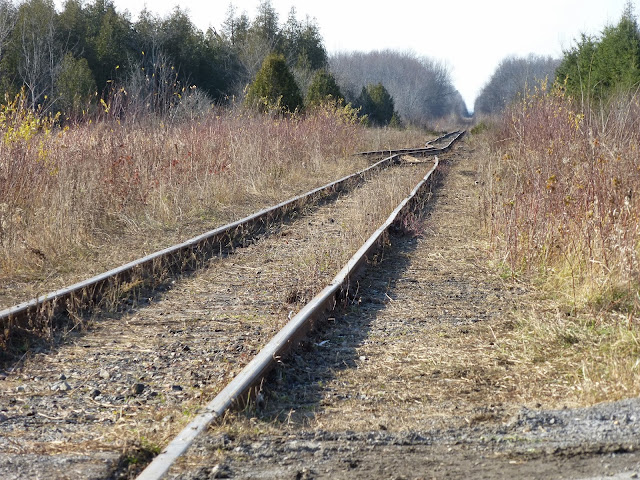 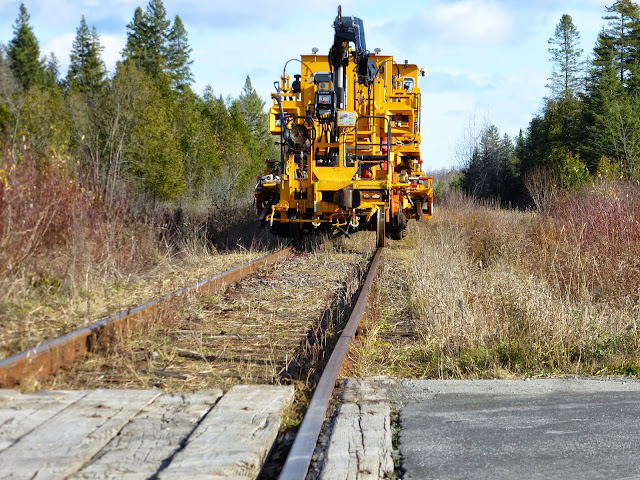 And here it is two days later. You can just make out the end of the work train in the distance. 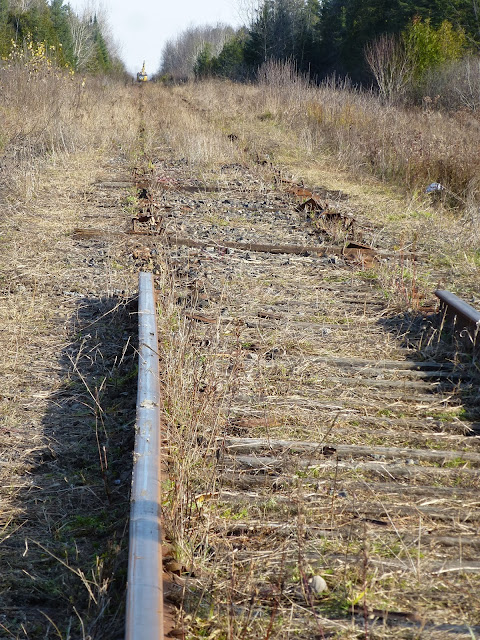 On Nov. 9, the work train was silent, as the crew was taking its days off before revving back up on Nov. 11. This is what I saw on Nov. 9 at Stonecrest Road.

On Nov. 11, I ventured out to another rural crossing, to try and catch the CN continuous welded rail work train in action. This led me to a rural road, Torbolton Ridge Road. As you can guess, this was another remote stretch of the city and it was heavily wooded. This didn't allow for great wide shots, but I felt compelled to capture something. CN GP40-2W 9543 was idling by the crossing, waiting for the track gang to finish its work so it could inch forward. 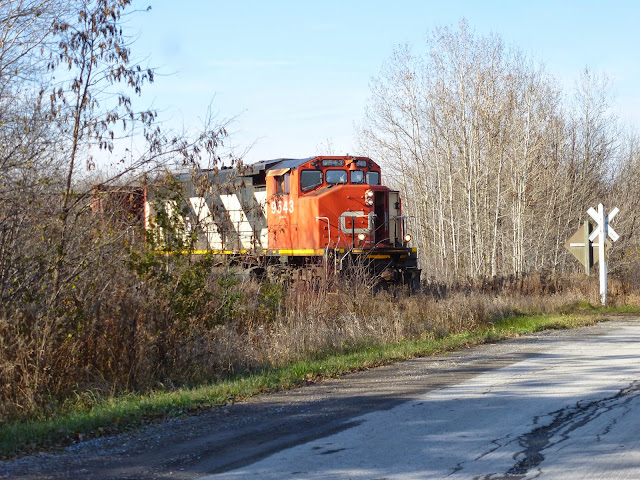 Here's a shot of the longest freight train I've seen in Ottawa in all my time in this city. How sad is that statement? 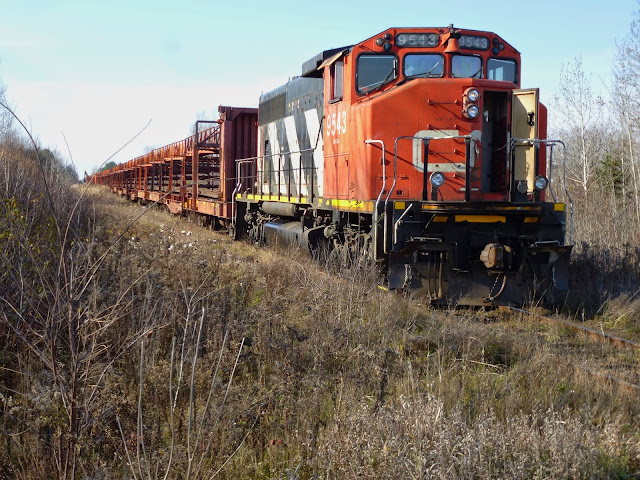 As you can see from the woody stemmed weeds in the above shot, this crossing is pretty rough. I stuck around for a while, thinking the train was about to move. One of the worker's cars was idling on the road, which led me to believe something was about to happen. After half an hour of waiting, I decided to call it a day. Here are a few more shots. 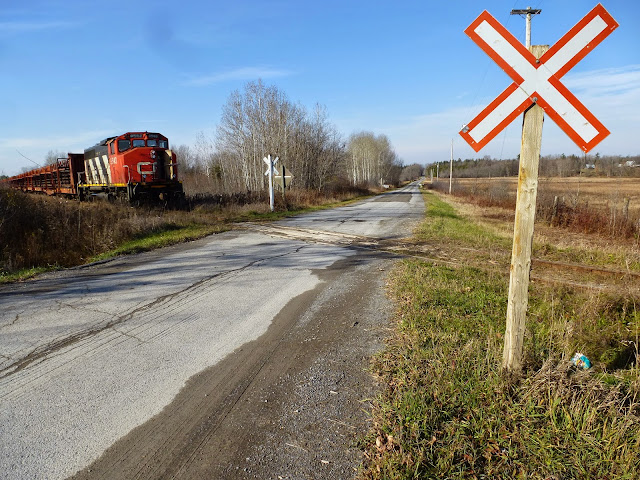 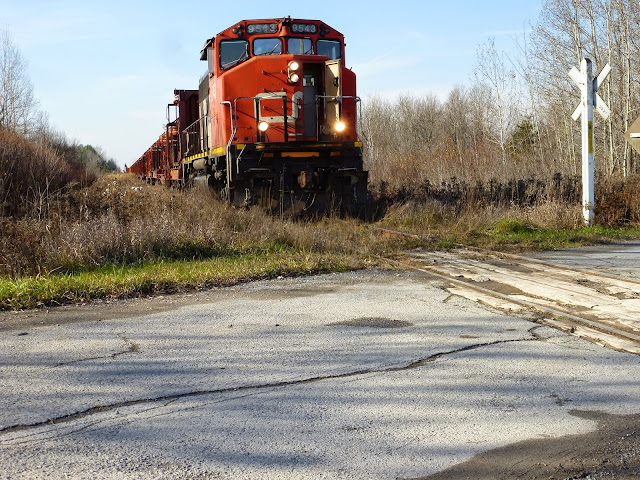 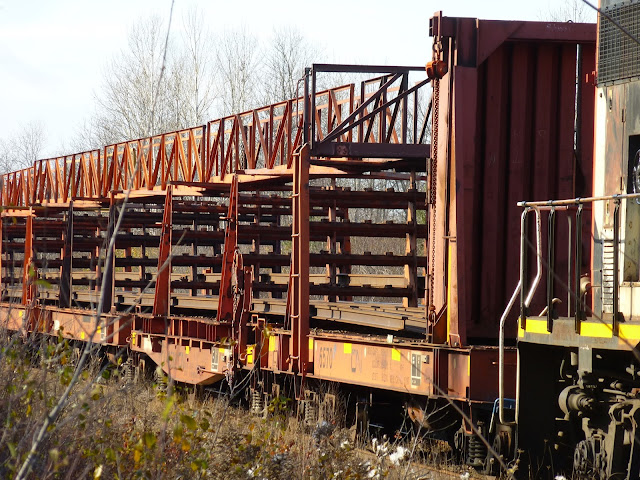 By now you know the story of the subdivision. It was once part of a transcontinental main line, which stretched through Algonquin Park and a large swath of rural Ontario. You know it was also a vital part of the Ottawa Central Railway.

I thought about the name of my blog this week and wondered about the merits of changing the name for a moment. But, as one of the few rail enthusiasts carrying the torch here in Ottawa, I think it's more important than ever that we pay attention to the past.

After all, Ottawa's troubled light rail plan is proof positive that those who ignore our history are doomed to repeat it. And at great cost.

I agree Michael, keep the name.

I heard the horn near Greenbank Rd. today at approximately 3:30PM, could that of been the work train heading back to Ottawa?

You got alot of good shots, much better than the ones I tried to get.

I agree that you should keep the name of the blog as it is, just so people can remember.

Great shots of a very sad event. You are right in saying this is the longest freight train in Ottawa in a long time, the last ones that I remember were in the early 90's on the Alexandria sub, pulled by the same gp40-2w's I believe. It never crossed my mind that it would ever come to this for the railroads around Ottawa. All this makes me wonder how safe is the Renfrew sub? I also agree with DaveM in keeping the Beachburg Sub name for your blog...

The Beachburg Sub wouldn't be the same with any other name. It is a poignant reminder of what used to be, and without it, it's namesake would soon be forgotten. Great choice!

Pat, just thinking of the Renfrew sub being gone makes me devastated. I hope with all that I can that it stays safe.

The Renfrew Spur, as it is now called, is safe. The city owns the line and Nylene Canada in Arnprior maintains the line. The company said during the Ottawa municipal election that it is looking to put the line to better use, whatever that means. I think the city sees this line as a possible future commuter option. You know, whenever they get around to stretching the LRT to where it's needed most.