This was not the homecoming I had imagined.

Over the Thanksgiving holiday, I made a very brief visit to Sarnia, Ont. While there, I made a quick visit to the yard at end of the CSX Sarnia Subdivision. I had been looking forward to this visit for a while, since I had not had the chance to shoot anything along this line since my teenage years in the 1990s. I should back up a bit. Just before I made my trip, a Beachburg Sub reader mentioned to me that CSX Transportation had officially discontinued service on the Sarnia Sub between Chatham and Wallaceburg. He mentioned that he saw the last train leave Wallaceburg, on the southern end of the line. 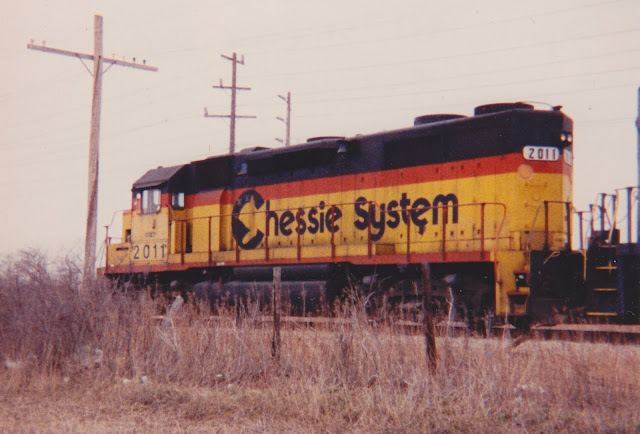 Above: GP38-2 2011 in Chessie colours idles on the main line just outside Corunna, leading a manifest freight in April 1991

This wasn't all that surprising to me, but it was nonetheless disappointing. A 42-km section of the line has been purchased by the City of Chatham-Kent, which has a side deal with Canadian Pacific to sell it the rail assets along the corridor. What this means is the municipality is paying CSX about $4 million for the line and its assets and turning around and selling the rails and ties to CP for $3.2 million. For the time being, CP is not pulling up the rails, which has given the municipality time to find a shortline operator. A good summary of the situation can be found at the Chatham This Week website. This is an all-too-familiar story for me, although Chatham-Kent seems to be more interested in saving an active rail line, compared to Ottawa, which seems to have no vision for the Beachburg Sub within its borders.

With this in mind, I made sure to capture some action on the CSX line while I still could. The weather on the Sunday over the Thanksgiving weekend could not have been any better. Here's a shot of a stable of GP38s at the end of the line, tucked behind the Esso refinery in south Sarnia's Chemical Valley. Compare these to the old Chessie GP38 above. 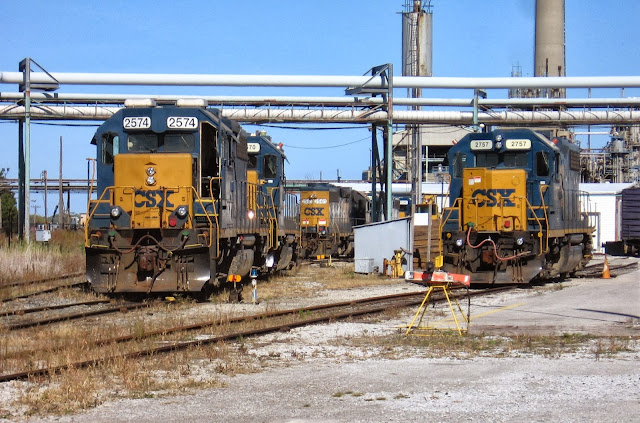 The article in Chatham This Week pointed out that there are still some farm businesses along the CSX line in Chatham-Kent, but the sad reality is the area has lost a number of its manufacturers in the last 20 years including a Louisville hockey stick factory, a Nestle plant, a Libbey Glass factory and a number of auto parts or tool and die shops. Many of these businesses used the line for shipping, since parts of this municipality do not have a terribly close connection to a major highway, especially Wallaceburg. 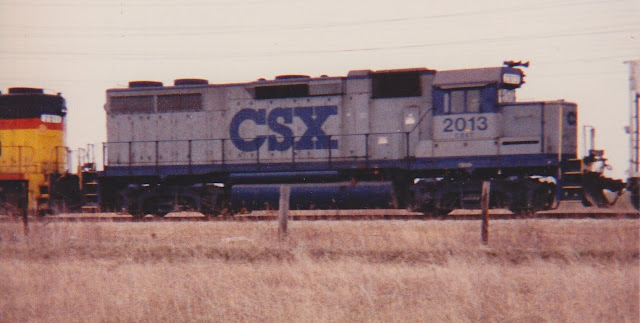 Above: First generation CSX paint scheme on a GP38, just outside Corunna in April 1991.

What this means is that the Sarnia Sub will likely be a very compact line serving petrochemical companies in the Sarnia area and communities to the south. The site of manifest freights with boxcars and autoracks is now a distant memory. Besides the loss of the manufacturing sector in this area, this line was also hurt by the new CN St. Clair Tunnel and the expansion of the Michigan Central Railway Tunnel in Windsor, which was expanded shortly after the opening of the new Sarnia tunnel. Since both of these tunnels began handling autoracks in 1994, this essentially eliminated all autorack interchange traffic on this line, which was a major source of freight on the line until the early 1990s. 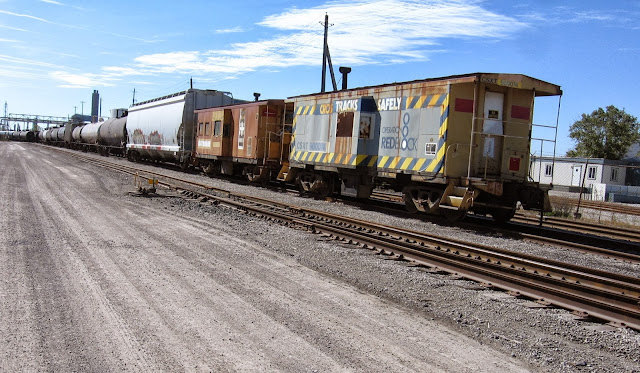 Above: This made my trip to Sarnia worthwhile. Two CSX bay-window cabooses, one with CSX Operation Redblock paint, sit at the tail end of a cut of cars along the CSX Sarnia Sub in the Chemical Valley. More on these beauties in future posts!

I will keep an eye on this situation, although I do encourage readers to continue to update me on what they see down in this part of the province. I can't help but wonder why so many shortline operators can find success in the United States while rail lines like this one, and the Beachburg Sub, continue to languish in Canada, much to the chagrin of local industries crying out for rail service along abandoned lines.

It strikes me that the Class I railways in Canada have become so good at being Class I railways, they have forgotten or willfully neglected the quieter branch lines along their networks.

An article in a recent TRAINS magazine leads me to believe that both countries have the same phenomenon - Class 1's being trunk lines, with feeder lines (shortlines) required to feed them. Main reason - it is hard, hard work for Class 1's to generate loose car shipments on branch lines, especially when contrasted with unit trains or other high-volume intercity or regional hauls.

Agreed, Eric. There's no doubt that Class I railways aren't able to make a go of it easily on branchlines like Beachburg, but I wonder how it came to be like this-- was it deregulation, shareholder pressure or simply the main line opportunities brought on by free trade.

Those are all valid reasons, Michael, plus the shrinking and consolidating of freight sales staff. No-one on the ground to go out and visit shippers. Plus, mainline turnouts are expensive to maintain, and both railways have ripped out lots of them, even for sidings and backtracks. It was also expensive to send out a local switch engine to lift or set out two cars with unionized labour, larger crews plus the loss of many small shippers or their use of trucks.