Meet me at the station

Ottawa is not a train-watcher's destination by any stretch. I have mentioned this a number of times since I started this blog. However, it doesn't mean there aren't trains to see, if you are motivated. This week, I have decided to lay off the history lessons and actually photograph some active railroading in Ottawa.

The most obvious train-watching spot is Ottawa's central train station. I headed there on my lunch break earlier this week, since it was dead at work and the station was a few minutes by bus from my workplace. This was the scene when I arrived. 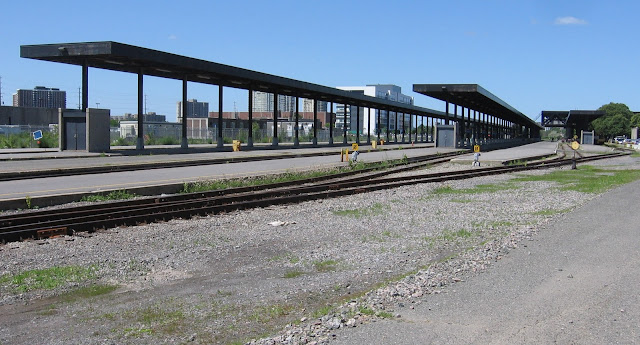 Not much to look at, but it gives you an idea of how extensive the platforms are here. I made sure that I was standing in a spot just on the edge of the no-go zone, in a patch of grass that was once a part of the rail yard, judging by the ballast stones that were creeping up from the grass. I was waiting for what I hoped would be a meet between Train 50, bound for Montreal, and Train 33, arriving from Montreal. I arrived a few minutes past Train 33's arrival time and saw a consist led by a P42 on the far south track (you can just make it out in the top photo between the support posts of the platforms). I was hoping that was not Train 33, since it was not accessible to shoot.

Soon enough, Train 50 arrived with F40PH-2 6411 and a short string of LRC coaches. This was the locomotive once painted in the Kool-Aid and Operation Lifesaver colours, according to RR Picture Archives. The shot below was taken from the vantage point of a service road beside the tracks. I was pretty sure I was not allowed to be on the road, so I went back to the grass to avoid any trouble. 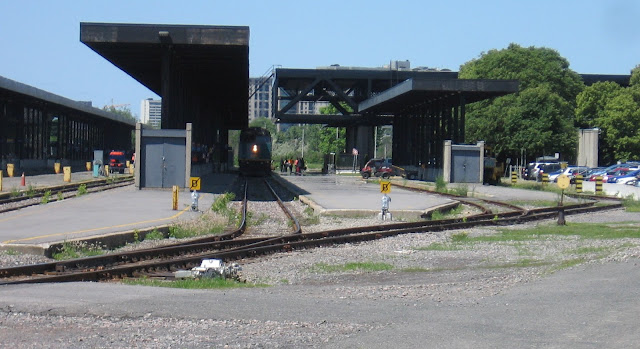 I waited while it boarded and kept an ear out for Train 33, assuming it was late. When Train 50 was fully boarded, it idled a few minutes, which suggested to me that it was waiting for Train 33 to arrive. You can see the other train on the south track more clearly (between the support posts) and also a yellow snowblower on the stub spur on the far right. 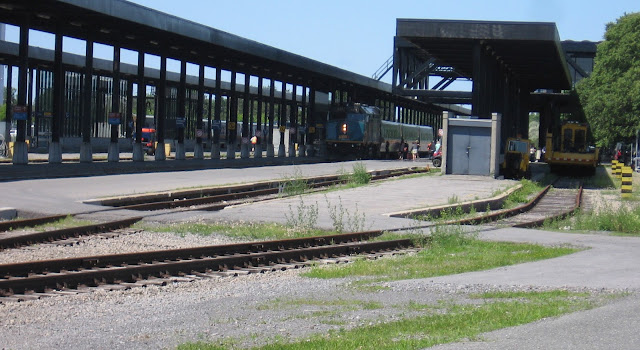 Train 33 arrived without much warning, which surprised me as I thought I would be able to hear it, but the noise from the nearby overpass drowned out the train until the last minute. I managed to get a couple of hasty shots of P42 917, albeit from the shadow side. I should mention that taking shots from the other side of the fence is very tough, as most of that land is private property and off limits. My next adventure to the station will include a couple of overhead shots from the Belfast Road overpass. 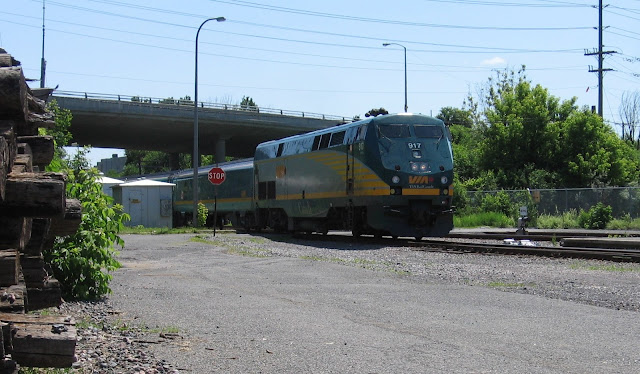 The real shot I wanted was a decent image of the two trains meeting. These were my attempts to get this shot from my vantage point, which was rather limited.

I was reasonably happy with the above shot, since I was going for a panorama-style shot with the two trains, the platforms, the spur and the switching mechanism all in a wide shot with some blue sky. I do like the look of the Renaissance coaches. At least the Government of Canada wordmark isn't as gaudy as it is on the streamliners and LRC cars. Still, I think the Canada flag, Via Rail maple leaf logo and government wordmark are overkill. The original blue and yellow VIA colours are still my favourite, but I digress.

I wasn't quite satisfied with that shot, so I hung around and waited for Train 50 to take off. This allowed me to get a shot more to my liking. 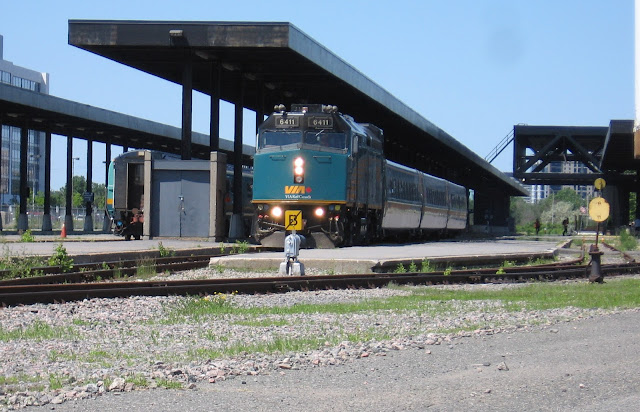 Train 33 pulled in a little further than I would have hoped, which prevented me from getting all of the rear of its last coach in the shot.

With my attempts at shooting the meet reasonably successful, I made sure to take a shot of Train 50 as it was bathed in the late morning sunlight. 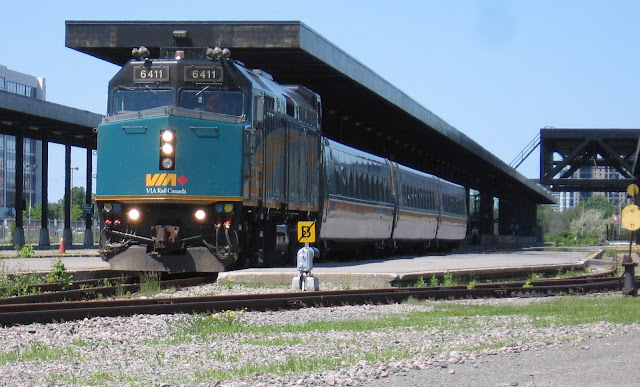 Then, one last shot going away. Notice the old rail ties and the CN shed on the left.

Nice post, Michael. I've thought of railfanning the west end of the station property. Hard to believe VIA stored excess blue & yellow cars here, shuffling them in and out in the early 1990s.

Welcome to Trackside Treasure as a blog partner, it's great to have you aboard!