End of the line for CP Ellwood Sub

Looking back on my first few posts in this blog, I realize that I have devoted a great deal of time to Ottawa's railway history. I don't mean to come across as someone who bemoans the fact that Ottawa has very little rails left. I have mentioned the decision to lift all rails from central Ottawa in the 1960s a number of times. I think this was probably a good decision, for the most part, since Ottawa really doesn't have the resource economy and heavy industry that require rail. The old rail yards along the Rideau Canal and the west end of the Lebreton Flats really make very little sense today, especially in an area that is supposed to be a showcase of the nation.

However, I do think that pulling every last rail up in central Ottawa and neglecting what little was left outside the core is a huge mistake. Case in point: the old Ottawa West train yard on the former Canadian Pacific Ellwood subdivision. This might be the biggest missed opportunity, due to its proximity to the end of the O-Train line and its future potential as a commuter link across the Ottawa River to Quebec. This old yard, where some minimal trackage remains, has literally gone to seed. I found this old piece of track signalling equipment among the weeds last week. It's one of a few relics that have been left to rust in the weeds. 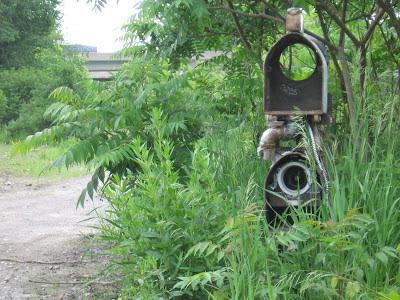 The gravel road to the left is an old right-of-way, long since torn up. To the right of this switch, buried in overgrown plants, trees and weeds, is a rusted right-of-way that leads to the Prince of Wales railway trestle across the Ottawa River (see photos below). This rail line branches off the end of the Capital Railway O-Train line, which runs north-south from Bayview Station, west of the downtown, to Greenboro Station, in suburban Ottawa's south end.

There has been talk about extending the light-rail line across the river to old Hull, now part of Gatineau, but the condition of the trestle would place severe speed limitations on any trains travelling across. As you will see below, the old bridge, now city owned, is in terrible shape. It has not seen a train in some time. I believe one the last trains to use the bridge was a ballast train that helped upgrade the road bed of the O-Train line. You can see that photo on Colin Churcher's excellent Railways In Canada site here. The last CP freight in Ottawa operated in 1997, and this portion of the Ellwood Sub was sold to the city shortly afterward.

Amazingly, as the city has been busily preparing for an east-west LRT rail line, there has been no discussion about keeping this valuable right-of-way in operating condition for future use. A group calling itself Mobility Ottawa Outaouais Systems and Enterprises (mOOse) has been lobbying government to try and get the city to maintain this piece of infrastructure, much as it would a deteriorating road. So far, there has been no effort to do anything other than let the rails rust. 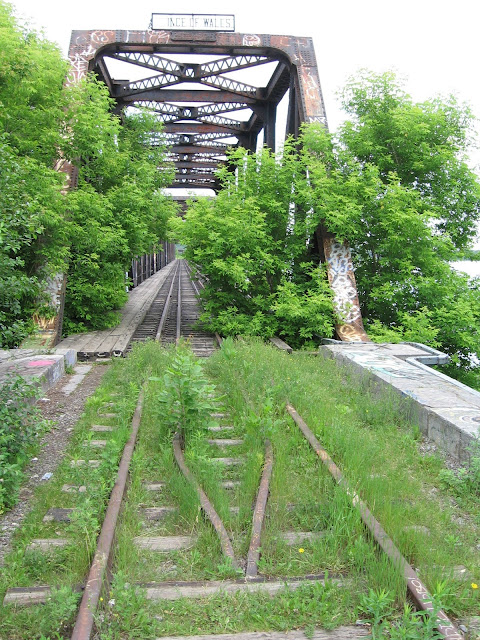 Even the script is coming apart atop the bridge! 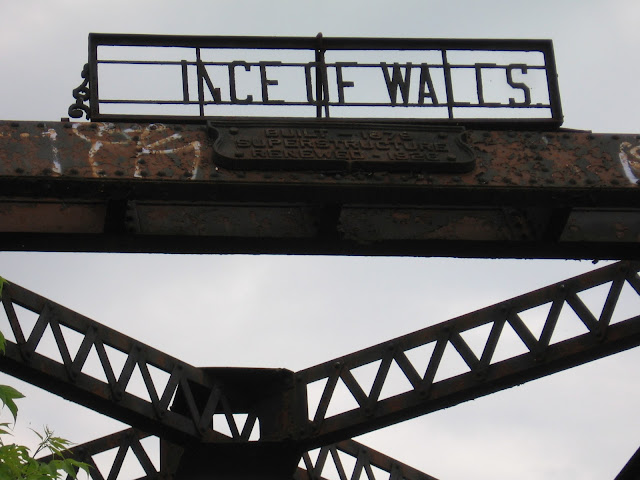 The Ottawa West railyard was once a bustling hive of activity, with a rail station for CPR's trancontinental passenger trains, a locomotive roundhouse and various other facilities, most of which were torn down decades ago. In many respects, this was probably a good thing since the CPR's cross-Canada trackage no longer runs through the Ottawa region, making the yard redundant, especially considering how close it was to residential areas in Hintonburg and Mechanicsville, to the imediate west.

Here's a great shot of the old Ottawa West station. This site is now a parking lot next to an overpass. It was taken in 1965 by Bill Linley and is also found on the Railways In Canada website. 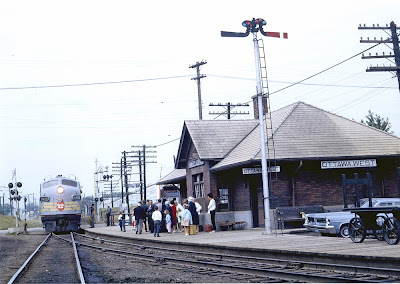 I was told by a rail historian recently  that this station was only used for transcontinental trains, like The Dominion, pictured left. CP used the downtown Union Station for all of its corridor passenger trains until it closed in 1966.

I should point out that, if you live in Ottawa and want to wander around this old yard, you can, since a bike path does cut right through it. However, the remaining right-of-way itself is city owned land and I don't think they would be too keen to know I was walking along the neglected tracks. I pass this area every morning on my bus ride to work and I was curious about what was actually left of this former rail hub. Here are a few more relics I found in my little jaunt.

The picture below is another old piece of signalling equipment that has been left behind. This one is right below the Sir John A. Macdonald Parkway (formerly the Ottawa River Parkway). 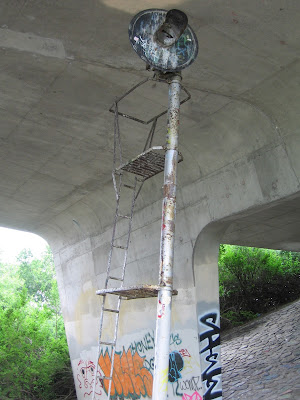 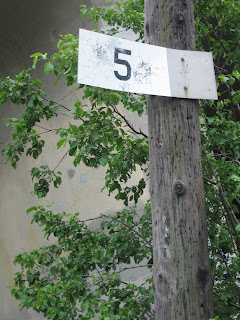 This, left, was Milepost Five, apparently. I was glad I checked out the area when I did. The birds seemed to be a little annoyed that I was encroaching on their little haven, especially a few that were nesting on the ground around the old tracks. In the coming months, work is going to begin on building a new Bayview O-Train/bus station, which will connect the end of the Capital Railway O-Train line with the overpass, where express buses travel to and from the downtown. What this means for the old CPR right-of-way across the river and bridge is not clear. I doubt anything will be done, other than a cursory clean-up at some point. However, if the city is indeed serious about building a light rail system, this key piece of infrastructure will need to be rehabilitated before it becomes too expensive to salvage. That's why I call this neglect on the city's part a huge missed opportunity. If the city had maintained even small pieces of its rail network, including this vital component at Ottawa West, it wouldn't be facing a multibillion-dollar bill to rebuild a rail network what was already in place.

Nice 'railway archaeology' photos, Michael, especially the INCE OF WALCS bridge! A nice survey of the Ottawa scene, both recent and retro.
Thanks for sharing,
Eric

How come the QGRY doesn't use this track to deliver to the few industries left in Ottawa? Or use Walkley yard to store freight?