Last blast of winter (Part I)

Over the March Break, I made my way to Southwestern Ontario to visit my family. I haven't seen any of them much since the beginning of the pandemic, so I made a solo trip down south to see them. I was looking forward to a few days without snow, since Ottawa was still pretty much covered when I left. Little did I know that a wide swath of lake effect snow squalls would hit right when I was driving southwest along Highway 401.

By the time I reached Watford, along Highway 402, I had had enough. I turned off the highway and made my way to the Confederation Line, a road that parallels the CN Strathroy Subdivision for much of its length through rural Lambton County. I was not all that far removed from Watford when I came across a mixed freight on a siding near Kingscourt Road, a narrow gravel concession. Since I was making good time on my drive and I had no family in tow, it was time for some quick railfanning.

Here is my first shot. 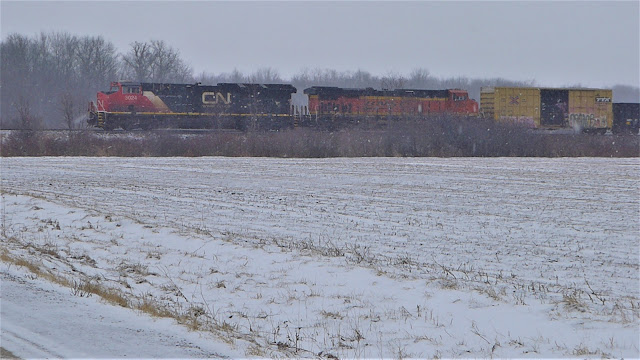 CN ET44AC 3024 is joined by a surprising partner. BNSF ES44C4 8200. It's always fun to catch something rare, especially a BNSF unit. I don't know if this unit's appearance was a result of run-through power from Chicago or a short-term lease. Both possibilities are likely as this train was headed eastbound toward Toronto, which means its departure was probably from Chicago. Just a guess.

The first time I saw BNSF units in person was way back in 2014. Here's the post from the last time I caught up with some of these orange units.

By the time I got to this crossing, it was clear to me that this train was waiting for the passing of a westbound train, or so I figured. As the snow was flying fiercely in the wind, getting some clear shots of this train was not as easy as you'd assume. Sure, it was stationary, but the combination of wind, trackside overgrowth and a dark, overcast sky meant I had to try getting some different angles.

Here's more of an overall shot of the train. You can see from this shot that this is a true mixed freight. The first few cars in the consist say it all. TTX Boxcar, gondola, steel coil car, lumber car, covered hopper and boxcar. It reminded me of my younger days when I would often see CSX freights rumbling through my hometown with cars very rarely separated into blocks.

I did manage to cross the tracks, as there was no movement. Here's a shot from another angle. This gives you a better idea of the consist. I had to do a fair bit of colour correction to compensate for the gloomy day and poor visibility. 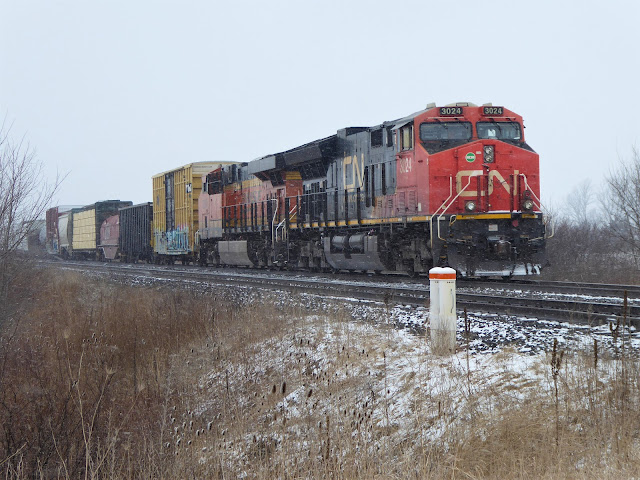 When I got the best shots I figured I could get, I decided to retreat to the warmth of my rental car and make my way to the next major crossing in Wyoming, to see if my theory about the approaching westbound train was true

But not before I tried some shots that were a little different. This one worked out well, as the crossing sign on Kingscourt Road added some much needed colour on an otherwise cold, grey blustery day. 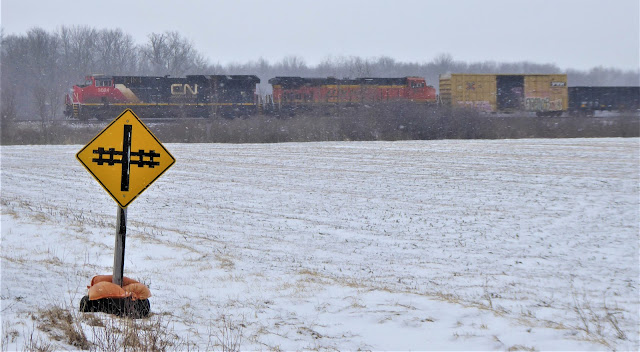 When I was first approaching the train, I noticed two large trees at the side of the road near to where I was taking some long shots. Before I left, I tried using the old trees as a frame for the train, just to give some context to the scene. 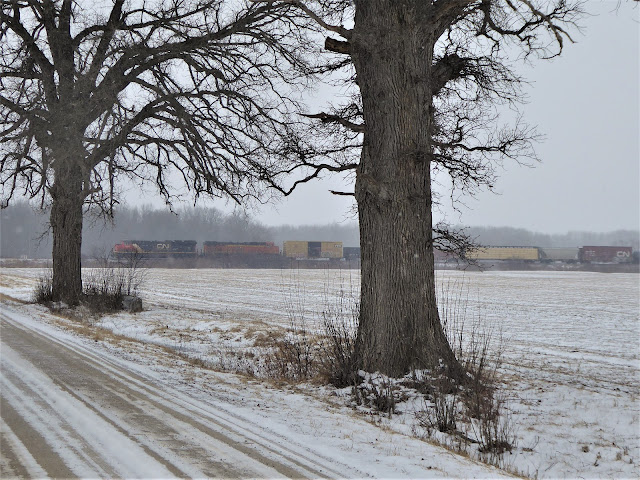 I like the shot, even if it wasn't as sharp as I would have liked. The blur in the photos is pretty much the blowing snow, as I arrived at the scene right at the edge of a snow squall.

The Strathroy Subdivision, like the Winchester Subdivision in Eastern Ontario, was once double tracked from Sarnia all the way to London, but with the installation of modern signalling, the line was reduced to single track a number of years ago, with a number of passing sidings kept in place to help maintain an efficient two-way route between Toronto and Chicago. This is what CP has done on the Winchester Sub in recent years.

Just east of CN's yard in Sarnia, there are several passing sidings in the rural parts of Lambton County, which are often used to keep this busy route flowing in both directions. I was quite fortunate to turn off the 402 when I did because I was able to catch this freight train with foreign power and also check out the situation in Wyoming, just west of this spot.

It was in Wyoming at its tiny Via Rail station when I caught the train that this consist on Kingscourt was awaiting. I'll save that until the next post, as it features some elements that are worthy of their own discussion.

Nice series of photos! I like the one with the crossing sign the best but they're all good. I love blowing snow.

I'm glad I was able to catch something, because the price was a bit of frostbite. Some hard-earned shots for sure.