Ghost in the Yard, Part I

Those who have been with me on this blog from the beginning know that I often do a lot of rail photography in Sarnia, where I grew up. I was finally able to travel with my family this summer and even squeeze in a little time trackside at Sarnia's train station.

I'm not a picky railfan. I see so little here in Ottawa, I will settle for watching a rail yard being switched. That was what was happening when I visited the yard on a cloudy morning in late July. To be honest, the cloudy conditions were ideal for me, as lighting from the station vantage point is tricky at the best of times, with the trains always being obscured by shadows. That morning, there were no such headaches, thankfully.

The first hint of activity was east of the station, as a consist of coil cars, a few hoppers and a long line of tank cars made its way toward the station. With the exception of the coil cars, this was a pretty typical consist for Sarnia, as much of the railway's local customers are in the Chemical Valley, which usually require tank cars and hoppers. These two types of cars are by far the dominant presence in this yard.

I tried to include some of Sarnia Station in the first photo. At this point, I caught a glimpse of a ghost in the consist, but I wasn't sure. In this photo, you can see an old GP9 long hood forward leading the way. 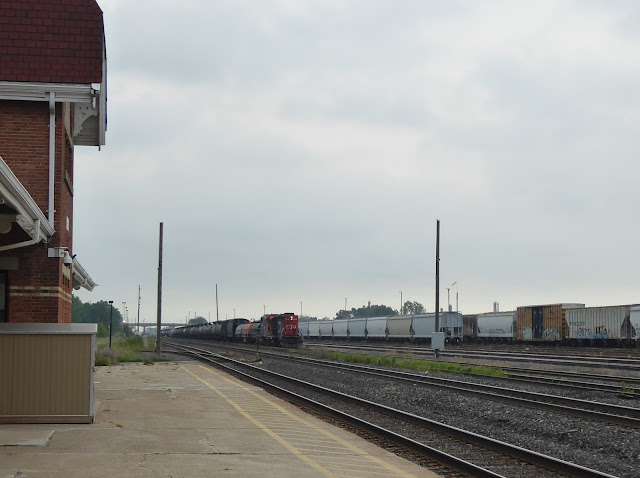 I had to wait a while for this train to make its way closer to the station. While I waited, I snapped a shot of this hopper car that is lettered NOKL, which you would think would belong to the Northwestern Oklahoma Railroad, but this is another case of a shortline leasing its reporting marks to a leasing company. 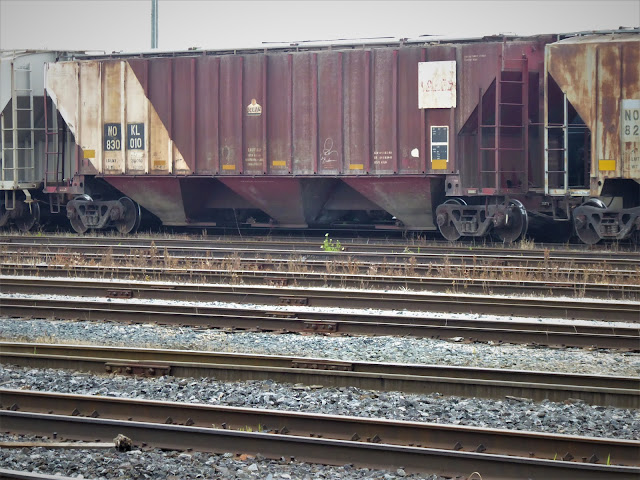 I looked up its history, because I was interested in the plate on the upper right hand side of the car and found that this car once belonged to First Union Rail (FURX) and Iowa Interstate (IAIS). The plate in the upper right corner once sported the Equity logo, which you can still make out in the middle of the car. There's a tiny decal still there. Here's a closer shot of that old logo.

With an assist from Eric Gagnon at Trackside Treasure, I was also able to find out a few more things about this car, which Eric told me was once referred to as the "sash scheme" hoppers, which have a capacity of 4,750 cubit feet. They were made by Thrall. Eric also shared that there are a number of more common yellow hoppers with the Equity plate on them.

Here was another NOKL lettered hopper with the XTRA lettering down the side. I know I have said this before, but taking photos of any type of rolling stock that is out of the ordinary may seem like a waste of time now, but it could one day prove interesting. I always make sure to find a car or two to capture whenever trackside. 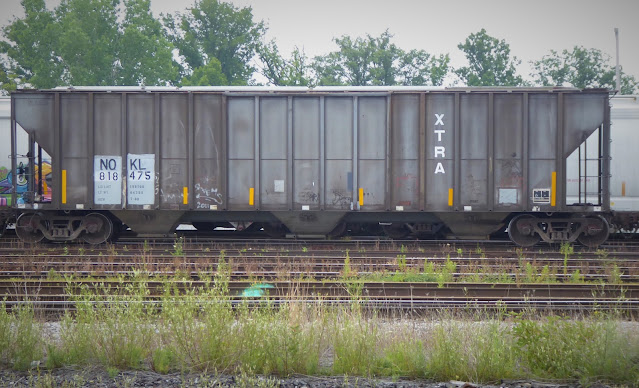 This car once had the reporting marks CFWR, which belong to the Caney Fork and Western Railway, a shortline owned by Ironhorse Resources in Tennessee.

As the yard job finally approached the station, I was able to confirm my suspicions about the rare piece of motive power in the consist. And there is was. Ex-GT 5849 GP38-2 still in its original GT colours. I know this might not seem all that rare to some more regular rail watchers, but it's the first time I've seen this scheme in person since the early 1990s. So, rare for me. What's even cooler is that this unit was once Pittsburgh and Lake Erie 2156. So it has a lot of history. 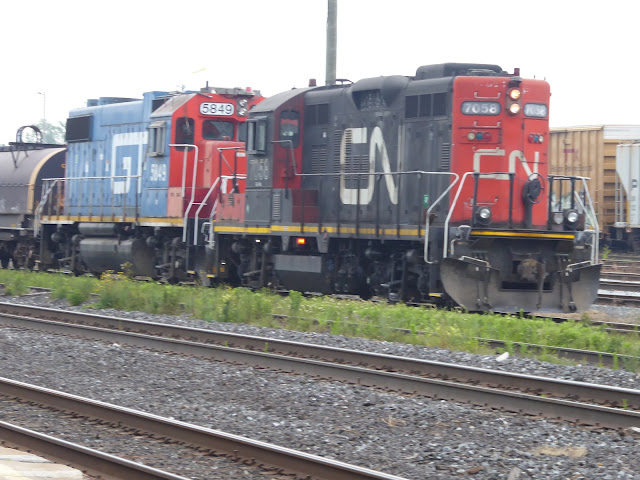 Here's a shot of just the GT unit. A nearby railfan at the station told me that the unit has been making the rounds in Sarnia for a few months. In the shot below, you can see that one of the front number plates had to be replaced. Not a great match, but it gets the job done, I guess. I also find it interesting that there is no CN stencil below the side numbers. It's as if the GTW never ceased to be its own operating entity. 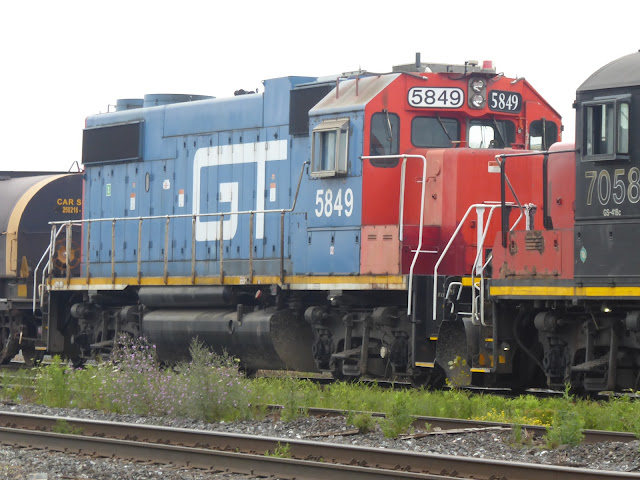 Here's an overall shot of the yard job. I had to strain the limits of my camera's capabilities to get a clear shot. It was a hazy morning and the rain was just about to fall. You can see three yard signal sets in the background as well as the Indian Road overpass over the rail yard. 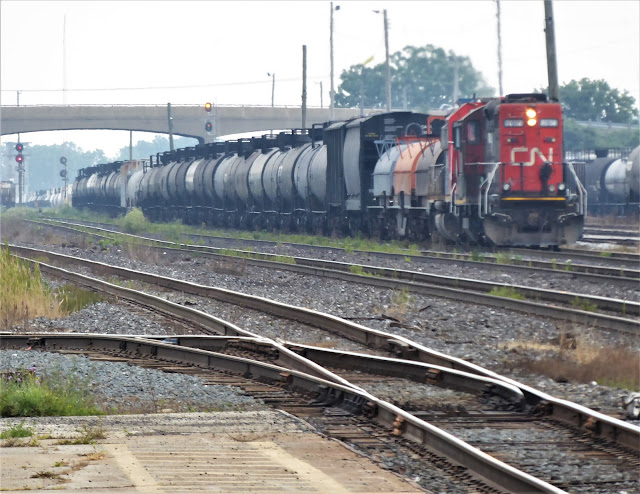 Here's a more conventional shot of the yard job, with a bit more clarity. 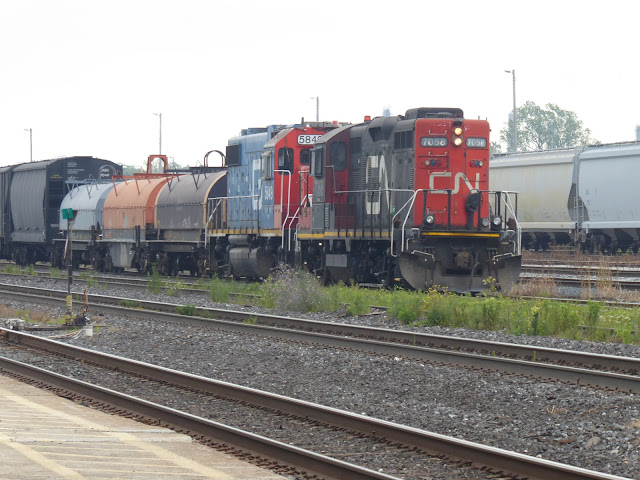 You can even see a carbon black covered hopper behind the coil cars. That hopper is either coming from or going to Cabot in the Chemical Valley. I got a better shot of that type of car when another yard job approached from the west end of the yard from behind a string of other cars. Stay tuned for that in the second part of this series.

In a way, I was lucky enough to catch a meet between two yard jobs, although they were a few tracks apart. It was quite a challenge trying to capture an image with both trains in the frame. I will leave that for the following post.

I'd consider this to be a very successful outing indeed! A blue GTW unit, some cool fallen flag cars, some GP9s... all great finds.

I've seen one or two of those "slash" cars and it's good to get some of the history of them. I have spotted a number of the Equity cars that Eric spoke of. They stand out!

When I lived in New Brunswick, there were many boxcars running around with NOKL reporting marks.

Thanks for the comment, Steve. It's interesting that you mention the GP9 as a catch, which never occurred to me to be anything remarkable. As I am used to seeing these old warhorses every time I go to Sarnia, I think nothing of them. But I have to remind myself that this is not the case everywhere. Good perspective on you part.