After Christmas, my family made its way to Florida for a family vacation. I made sure to carve out some time to sit trackside and capture some images of railway action outside my customary haunts in Ottawa. On Dec. 29, when my family was relaxing poolside, I made my way to the Lakeland Amtrak station to get some shots of Amtrak's long distance train, the Silver Star. This train connects Miami with New York alongside its sister train, the Silver Meteor. The Star serves Lakeland twice daily, once on its way northbound and once on its way south to Miami.

I arrived a little early because I was curious about the Lakeland Amtrak station, which has an unconventional design, but is still quite pleasing to the eye. It's not a terribly old station, but it has some nice classic touches, like the arched windows. Here's a shot from Lakeland's Main Street. For those interested in Lakeland's geography, it is located roughly halfway between Orlando (to its east) and Tampa (to its west). 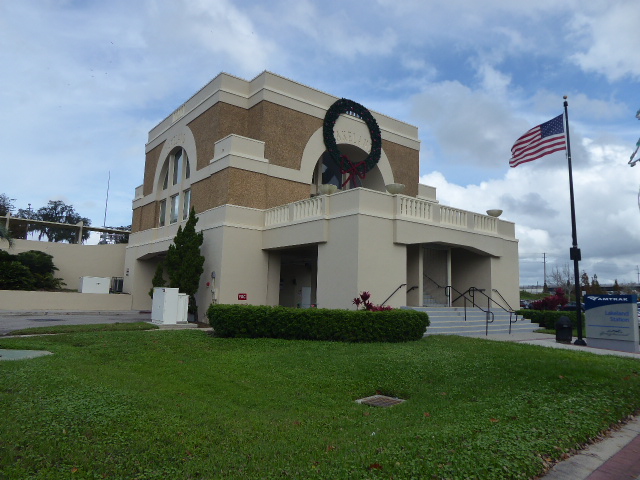 I couldn't help but think of some comparisons between Amtrak and Via Rail Canada, while I stood on the platform, waiting for the northbound Star to make its way to the platform. My first observation was how impossibly long the platform was (look carefully at the image below and you will see just how far into the distance those arches recede).

My first thought was how many more long distance trains Amtrak has in its schedule compared to Via Rail. It's not an apples-to-apples comparison by any means, since Amtrak relies much more heavily on regional subsidies for many of its longer distance regional trains, but the fact remains that its long-distance trains that fall under the Amtrak National umbrella outnumber Via's Canadian and Ocean by a wide margin. 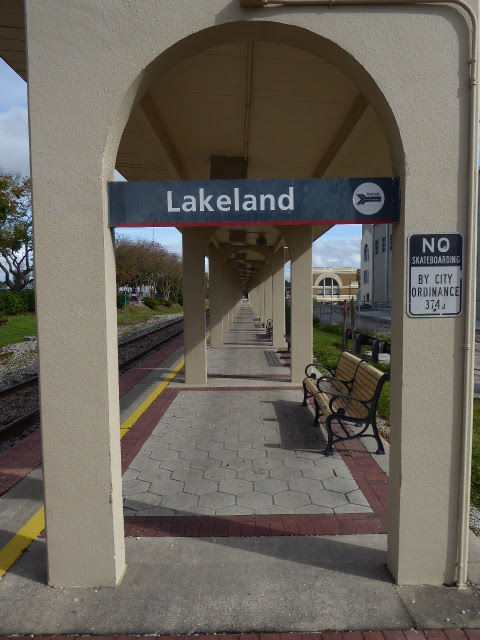 Here's a shot of the Star crossing Massachusetts Avenue in Lakeland's downtown. The consist of this train might appear odd to some, but it does make sense. The train was led by two P42s, as all Amtraks seem to be. The P42s are arranged elephant style. I have read in a few places (including Trains Magazine) that this arrangement is used when a train breaks up into two pieces, like the Empire Builder does on its western fringes. In this case, the Star doesn't do this, but I have also read that the engines are often arranged this way, rather than back-to-back, as a redundancy in case one of the units breaks down. The other will then be able to take over without having to wye somewhere. 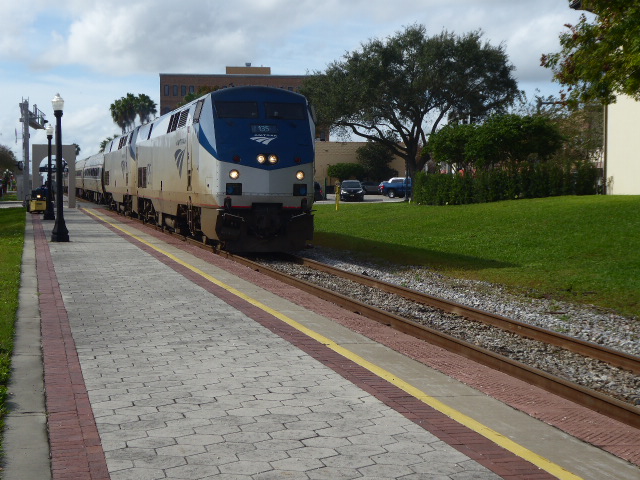 I was not able to get a great angle, since I was so close to the tracks, but I did manage to get a shot of some of the Amfleet equipment. This design seems to be timeless. I don't know if there was ever a time when Amtrak didn't have some generation of this type of coach in its fleet. I was reading not too long ago that this design was a carryover from the old Penn Central Metroliners, which Amtrak inherited when it took over much of the American passenger railway services in the 1970s. Apparently, despite the initial problems with the rough ride, Amtrak liked the fuselage style design of the cars and stuck with it. 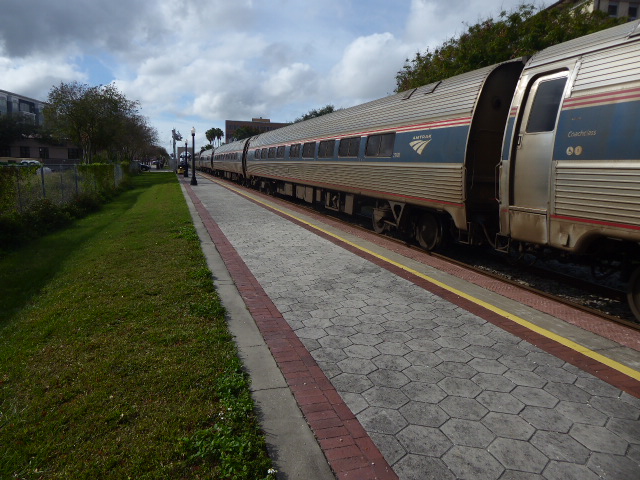 The end of these trains are always lined with newer equipment, with wider windows. You can even see the baggage car, which is at the end of the train. If you look closely, you can faintly see the light from the Amtrak station agent's scooter, which is used to carry bags to the back of the train. 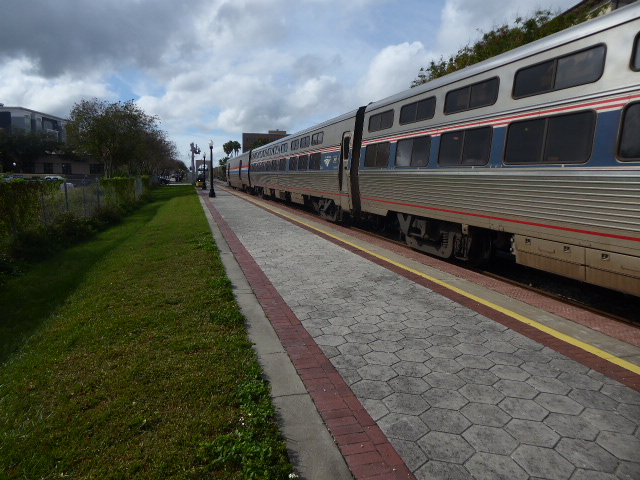 Here's a new baggage car, much newer than the baggage car I saw the last time I caught this train in Kissimmee, Florida a few years back. I am told that Amtrak leaves the baggage car at the back of the train on the northbound Star because it means one less car to turn when the train is readied to head back south to Florida. I'm not sure if that's the reason, but it does make for an interesting consist when this car is on the end. Notice, too, how the traditional Amtrak striping has been applied to this car. I'm often baffled by Amtrak's various paint liveries. There's always some form of red, white and blue but look at the difference between this car and the coaches. 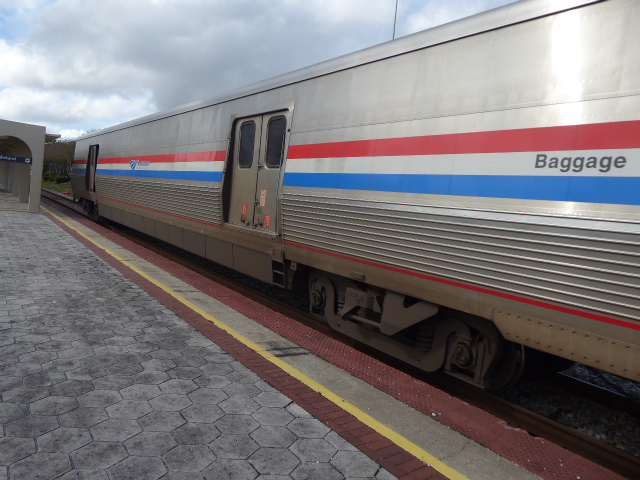 Now look at the blue and grey livery of its P42s. It doesn't make a lot of sense to me, but neither does the various shades of green, turquoise and yellow that Via Rail uses. I was actually hoping to catch one of Amtrak's heritage painted units, but this was all that was on display that day. 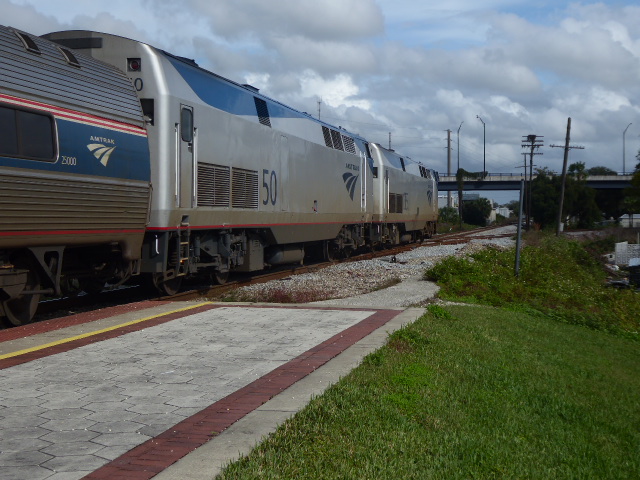 One last going-away shot and that was a wrap for this brief trackside meet with a long-distance passenger train. If you click the link above to the post where I met this train in Kissimmee, you'll notice quite a difference in its length. 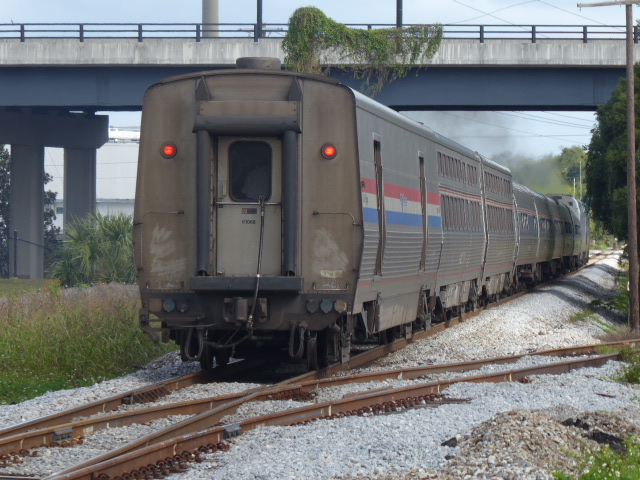 I tried to catch this train one more time, but there must have been some serious congestion on CSX's Florida lines because the train was ridiculously late the next time I was at the station and I ended up giving up. The A Line, which this train uses for the stretch through Lakeland, is lightly used by most indications, but the lines further south, which include CSX's S line (former Seaboard) has heavier traffic. In any case, this was my only meet with the Star. I did manage to make it out to a railway museum at Plant City and saw some interesting stuff. I will share that soon.

Nice catch! I like that station design... much nicer than an "Amshack".

I appreciate the detail on the cars. I like to see Amtrak to contrast them with VIA Rail.

I like those new baggage cars, needed to replace some of Amtrak's oldest cars!

Nice carveout of some time to get some treasure trackside! (plug shameless)

Thanks for sharing!
Eric

Thanks for the comments, gentlemen. I wished I could have caught more while I was in Florida, but Ottawa beggars can't be choosers. And I will go one step further with the shameless plugs. For more trackside fun, visit Steve's traingeek.ca and Eric's tracksidetreasure.blogspot.ca.