A matter of perspective

As I've mentioned recently, I'm not as big a fan of railyard shots as I once was, simply because there is so little action at times. The Smiths Falls CP yard is a great example. Although the yard has some interesting curves, which allow you to get some great angles in your shots, the yard is unfortunately but a shadow of what it once was. Those are not my words but the words of a couple of Smiths Falls railfans that I bumped into earlier this spring when I was at the yard.

However, when you have so few options in and around Ottawa, you take what you can get. So, on the day when I took my daughters to the Railway Museum of Eastern Ontario, I made sure to stop by the CP yard on our way home, just to see what was happening there.

This shot below is what greeted me when I turned the corner of the old passenger station and looked out to the north end of the yard. Two ECO units sat, one of which appeared to be idling and readying to take a string of gondolas somewhere west on the Belleville Subdivison. 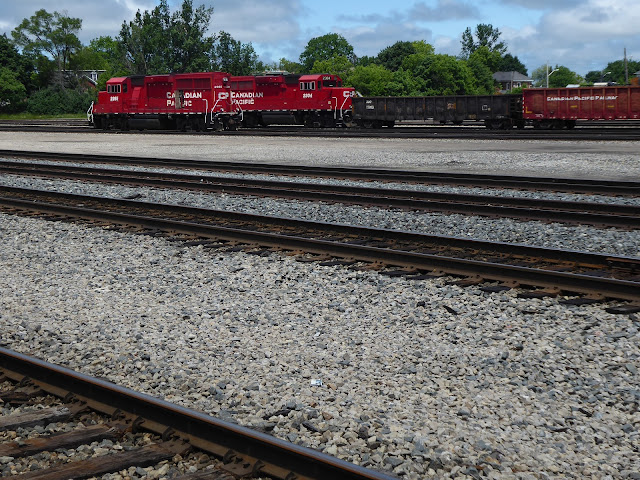 Now compare the top image, with the two units merged, with the image below, which was taken much closer to the actual units. A few paces and the perspective totally changes. I'm not sure which image I like better. The one above tricks your eye at first sight as it creates the illusion of a super long freight locomotive. The image below, of course, is a bit more conventional as you begin to see how these two units really sit on adjacent tracks. I also like that one of the units has a hatch open on the side, which is where you start the engine, correct? Someone out there can correct me if I'm wrong. 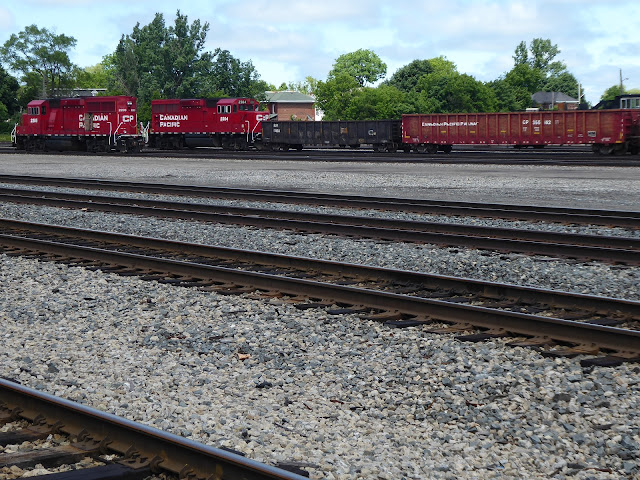 Here's a shot of some of the cars in the consist of the idling train. What was unfortunate with this shot is that I would really like to have a photograph of whatever was behind this gondola. Does anyone know what that is? I have a few ideas but I'm not sure. It looks like a piece of maintenance of way equipment. If I had stayed long enough, I might have caught the departure of the gondola train and gotten a better look at that hidden equipment. However, my girls were eager to get home to Ottawa, so I had to call it a day. 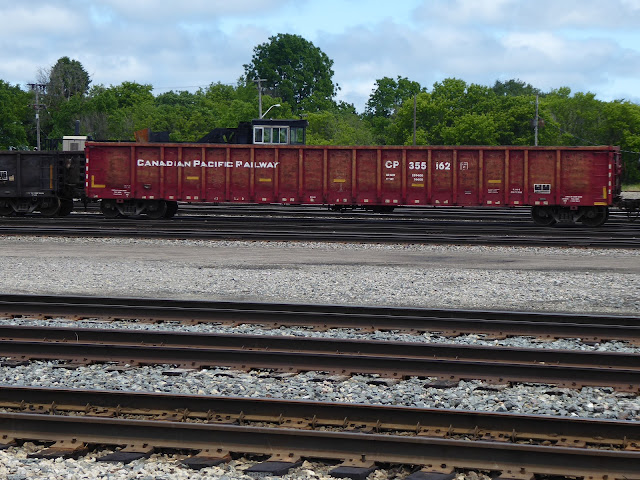 A little further down the yard, there was a long string of covered hoppers sitting a few tracks away from the gondola train. I love Potash cars, since they are among the few colourful cars out there right now. I also like the Agrium car alongside the Potash car. Anything is better than the grey-sided blank hoppers that are owned by the leasing companies. 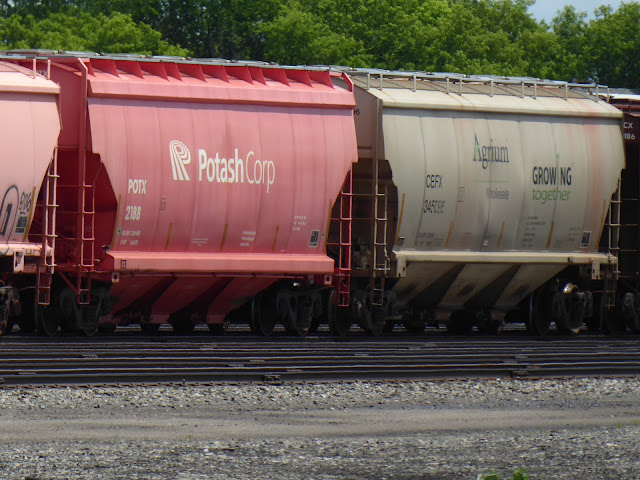 So, all in all, it was worth taking a few minutes of my day with my daughters to get a few bonus shots at the Smiths Falls yard. Despite the fact that the yard doesn't have a lot to offer in the way of freight action these days, I still like going there because the perspectives that you get here are worth it. Those two shots of the engines at the top of the post are great examples of how you can play around with the curves in Smiths Falls and get some very different shots, even in a quiet rail yard.
Posted by Michael at Friday, October 25, 2019
Email ThisBlogThis!Share to TwitterShare to FacebookShare to Pinterest
Labels: Belleville Subdivision, Canadian Pacific, CP Rail, Eastern Ontario, freight trains, railfanning, railways, Smiths Falls, Smiths Falls Subdivision

It looks like the cab of a spreader to me.

I like how you showed how the different angle / distance changed the photo. Too many people don't "zoom with their feet" and miss the chance of a different (or maybe better) photograph.

Since PotashCorp and Agrium merged, the potash trains have been a lot less uniform. You used to see an entire orange train, but now they are all intermingled. I'm still waiting to see my first green Nutrien car, though. That'll be fun!

Thanks Steve! I kept staring at the photo and drawing a blank. But now that you mention spreader, it makes me think of the Trains magazine that had a big feature on a spreader a few years back. I really do wish I could have had a open view of that piece of equipment that day.

By the look of the cab and a minimum amount to be seen over the gon, I would say it is a Jordan Spreader.

It is definitely a Jordan Spreader. There is video of it being moved in a video that can be found on the Eastern Ontario Railways Facebook page that I know Michael you are a member of. I saw an unobstructed view of it when I took a train to Toronto last year and visiting Smiths Falls and railfanning like you did Michael.

Yep, Jordan. And I bet those gons are for scrap tie pickup somewhere west of the Falls.

Thanks for sharing these, Michael!
Eric

Those potash cars are likely cars to/from the Stranex facility on the South Prescott Spur. They are often interchanged to CP from CN in Brockville.

Thanks for the comments everyone. I guess it was a near miss for me with the spreader. Man, I wish I would have been able to catch it in all its glory. Oh well. Good info on the hoppers and gondolas. You guys know your stuff. I am never disappointed by the comments section!