My brother surprised me a few weeks back with a couple of shots he grabbed while meeting a CN local on the St. Clair River Industrial Spur. This shot was taken at the level crossing just south of Corunna. The power on these trains often looks like this, with a couple of geeps from Sarnia yard facing in either direction helped out by a yard slug. This shot was taken in early August. In St. Clair Township, CN has a number of customers, not the least of which is Nova Corunna, which you may recall I wrote about a little while back, and Nova Moore.

Given that CN mostly services petrochemical plans in the township, the trains along this spur don't offer a great deal of variety. Most trains consist of black or white tank cars, depending on the loads, and covered hoppers. You can read about what CN carries on this line and their carload numbers by checking out the Nova Corunna link I posted above.

As you can see below, it's not always a complete wash when you railfan on this spur. My brother was lucky to catch this old Union Equity covered hopper (GROX 60662). It's a three-bay hopper. You can just make out the patch on the upper right hand side of the car. Here's another shot of this car, which gives you a better look at the patch in the corner. 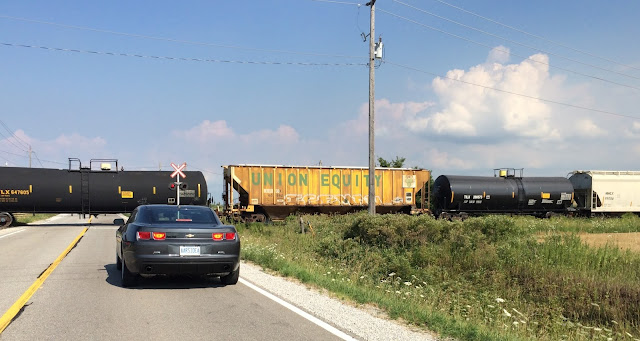 In late August, my brother was taking his son to the rail yard, as is their weekend custom, when he caught an unusual yard engine tied up to a CN GP9 and slug 230. This unit, CCGX 4009, has previously worked on the Orangeville Brampton Railway (OBRY), but has found its way onto the CN system of late. I found a few shots online of this same unit in London. CCGX is the reporting mark for Cando Contracting, which operates freight trains over the OBRY line between Orangeville and Mississauga.

Here's another interesting find from my brother in late August in Sarnia. This boxcar, SLR 140, is an XP commodity handling boxcar for the St. Lawrence & Atlantic Railway. It's not often you find a boxcar with such a short car number. The railway is a Genesee & Wyoming concern operating between Montreal and Portland, Maine.

My thanks to my brother for continuing to provide some interesting shots from southern Ontario. I can only hope I have such luck when I go down to visit in the coming weeks.
Posted by Michael at Thursday, September 22, 2016

Nice finds! I saw a couple of Union Equity hoppers recently, for the first time. I credit Eric Gagnon with inspiring me to pay more attention to freight cars.

Freight cars, containers and everything on a train is very interesting. There are many things to look at!

You know, for someone who sees freight trains so rarely, I seem to have gotten kinda picky, eh? Well said GP9. There are always interesting things to see on any train. I have always wanted to railfan on this line. I hope I might be able to get a glimpse of action on this line in October.

Interesting that the GROX photo you linked to was way out in Kansas!

Watch for an upcoming Trackside Treasure post on the SLR green boxcars, though not the blue ones.

The Year of Photographing the Blisteringly Mundane!
Great post,
Eric

Thanks for the advice, Eric. If not for readers like you, I wouldn't learn anything! The shot of the hopper in Kansas really does illustrate how these cars get around. Truth be told, I chose that photo because it showed the patch on the right side of the car better than the other shots. I look forward to your post about SLR boxcars. In researching this post, I read some interesting things about that railway.